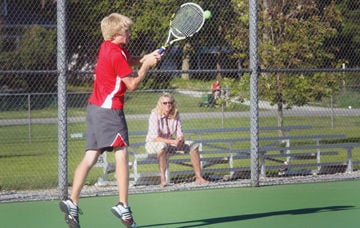 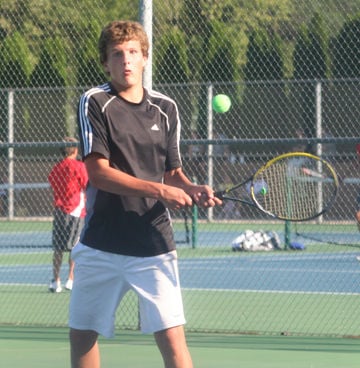 NorthWood's Mitchell Keyser eyes a return against Goshen's Austin Stutzman during a meet on Thursday.

NorthWood's Mitchell Keyser eyes a return against Goshen's Austin Stutzman during a meet on Thursday.

Goshen boys tennis coach Daniel Love has been talking to his team about finishing matches.

The Redskins seemed to take that advice to heart in a pretty big way on Thursday night in their NLC meet against rival NorthWood, taking every match en route to a 5-0 victory over the Panthers.

One of those was at No. 2 doubles, where Derick Hostetler and Zach Ganger were down 4-1 in the second set of their match.

The duo rallied to tie the second set at 4, then took the lead. But NorthWood’s Devyn Maugel and Caleb Yoder put together a rally of their own to go back up 6-5.

The Goshen tandem rallied again to force a tiebreaker — and again Hostetler and Ganger found themselves down early3-0.

They ripped off seven of the next eight points to take the tiebreaker and the match.

Hostetler said the key to he and Ganger’s victory was keeping up their intensity throughout the match.

“We’ve been working on finishing points,” Hostetler said. “When we get in trouble, we just have to shake it off and keep the intensity high.”

Ganger concurred. “We talk to each other, and we find a way to keep our feet under us,” he said.

NorthWood coach Tiffany Schwartz saw some good moments from her team, but not enough of them.

“Our guys competed well. But we just can’t seem to get a big point when we need one,” Schwartz said. “We need to win a close one, so we can get some confidence.”