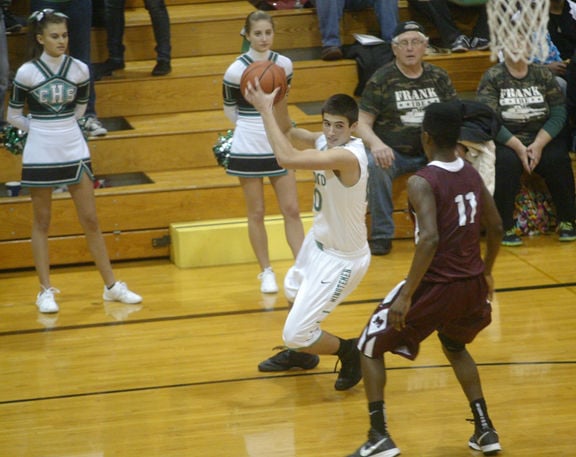 Concord's Adam Glanders looks to drive against Mishawaka's T.J. Hursey Saturday night in the second half of an NIC-NLC Challenge game at McCuen Gymnasium. 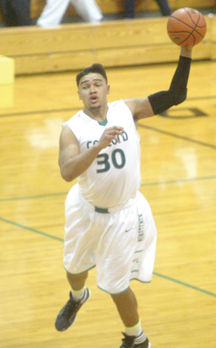 Concord's Franko House whips a pass out to the perimeter Saturday night against Mishawaka.

Concord's Adam Glanders looks to drive against Mishawaka's T.J. Hursey Saturday night in the second half of an NIC-NLC Challenge game at McCuen Gymnasium.

Concord's Franko House whips a pass out to the perimeter Saturday night against Mishawaka.

After a tough win over Mishawaka Marian Friday night in the NIC-NLC Challenge, the Concord boys basketball team was looking to keep the momentum going Saturday night against visiting Mishawaka and end 2012 on a winning note.

The Minutemen were able to do just that, rallying from a 21-18 halftime deficit for a 49-40 win over the Cavemen.

With the victory, the Minutemen improved to 7-0 on the season. Mishawaka dropped to 5-2.

Concord, trailing 21-18 at intermission, came out on fire with an 8-0 run to start the second half — punctuated by a thundering Franko House dunk off an off-the-backboard pass from Ramon Johnson.

The play ignited the crowd, gave the Minutemen a 26-21 lead, and led to a Mishawaka timeout.

The Cavemen responeded well to the break, and came back with four quick points to cut the Concord lead to one at 26-25.

But from there, the Minutemen — backed by stifling defense — began to take over.

The Minutemen led 32-28 at the final stop and Mishawaka never got closer than five points down the stretch.

Concord coach Steve Austin was especially pleased with his defense.

“We were concerned about this one, because Mishawaka’s got some athletes,” Austin said. “We played much better defense in the second half ... Our defense is ahead of our offense at this point. When our offense catches up to our defense,we’re going tobe pretty tough to beat.”

The Minutemen are a bit further behind on offense because of several players who were part of the football squad that advanced all the way to the Class 4A semistate game against Mishawaka.

One of those players is senior guard Adam Glanders, who has been working to find his shot after the long football run and later-than-usual start to basketball practice for him.

Glanders had 11 points Saturday night against the Cavemen. House led the way with 16 and Johnson had 10.

Despite the fact that the Minutemen will enter 2013 undefeated, Glanders said he and his teammates are not satisfied.

That work starts next Friday night when the Minutemen travel to Goshen to resume NLC play against the Redskins. Tipoff is slated for 7:45 p.m.

Do you prefer holiday shopping online, in person or both?

Black Friday and Cyber Monday kick off the holiday shopping season following Thanksgiving. Do you prefer shopping online, in person or both?