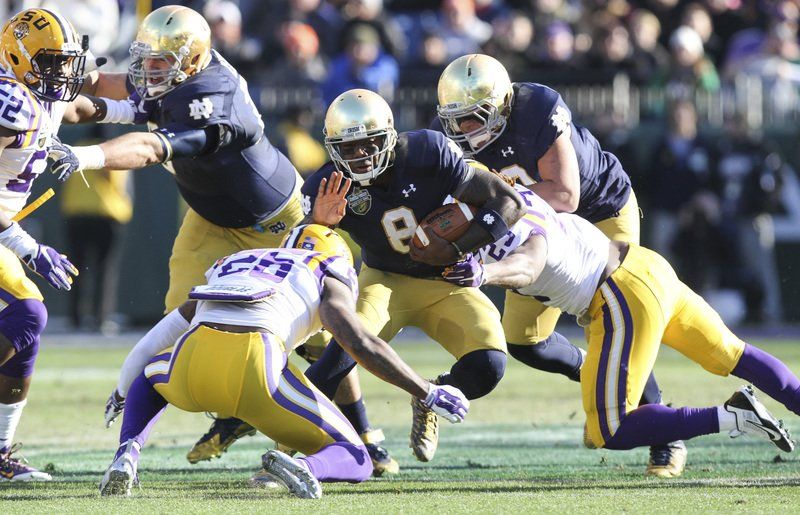 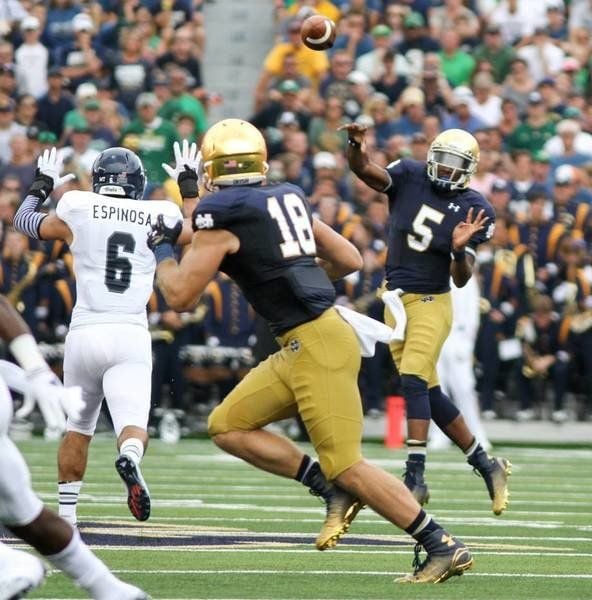 Notre Dame quarterback Everett Golson unleashes a pass against Rice on Aug. 30 at Notre Dame Stadium in South Bend. Golson and Malik Zaire will be competing for the top quarterback job during spring practices, which opened today for Notre Dame.

Notre Dame quarterback Everett Golson unleashes a pass against Rice on Aug. 30 at Notre Dame Stadium in South Bend. Golson and Malik Zaire will be competing for the top quarterback job during spring practices, which opened today for Notre Dame.

What does he want to see by the end of the spring in the quarterback competition between Everett Golson and Malik Zaire? Does he want to have a starter established?

“I really don’t know. I really don’t know,” Kelly said Tuesday. “I think it’s going to take us some time to get a feel for how this competition is going to go. Again, once we see how they’re going to compete, I think we’ll have a better understanding of answering that question.”

The Irish start spring football practices today, a seven week stretch that Kelly said is key to the development of the 2015 team, which kicks off in August.

“These next seven weeks are about skill development,” he said. “They’re about developing your football team as one, as a unit, leadership, understanding the important principles of selflessness.”

Among the key things Kelly reiterated that he’s looking for during the spring practices are how players compete in live football drills, and how players lead in practices.

The leadership aspect will be carefully watched in the highly anticipated starting quarterback battle between Golson and Zaire.

Golson started every game in 2014, except for the team’s Music City Bowl victory over LSU, which Zaire started, and Golson saw action off the bench.

Now, just as it was at the start of training camp in 2014, the job is once again up for grabs between the two.

Golson completed 6 of 11 passes for 90 yards and had one carry for six yards.

Kelly said Golson needs to continue “his development in the disciplined approach of playing the position,” which includes continuing to take care of the football.

“We need to see a continuation of the discipline and the productivity that we saw in our bowl practices and leading into the LSU game,” Kelly said.

Part of the reason Golson lost his job at the end of the season was his inability to maintain possession of the ball. He threw an interception in each of Notre Dame’s final nine games, including throwing four at Arizona State in a loss.

Kelly said Tuesday, part of the reason Zaire wasn’t inserted into the starting spot sooner during the 2014 campaign was he didn’t show enough leadership in practice.

During the LSU game, Kelly saw that leadership.

“Leading his group, being vocal, being consistent, all those things need to be built on a day-to-day basis in the spring. He’s capable of doing it. He showed he has that in him. Now it has to be on display both in practice, and not just in games.”

Golson’s leadership, Kelly said, was something they have seen on display for quite some time.

After Zaire’s strong play against LSU, there had been a few offseason rumors about the possibility of Golson looking to transfer to another school.

Tuesday, Kelly said Golson is “100 percent committed to competing for the quarterback job here at Notre Dame” based on verbal communications the two have had.

Kelly said he has not promised anything to Golson, but also didn’t have to sell him on staying for a fifth year at Notre Dame.

“So he is committed. He has bought in 100 percent to competing for the quarterback position here at Notre Dame.”