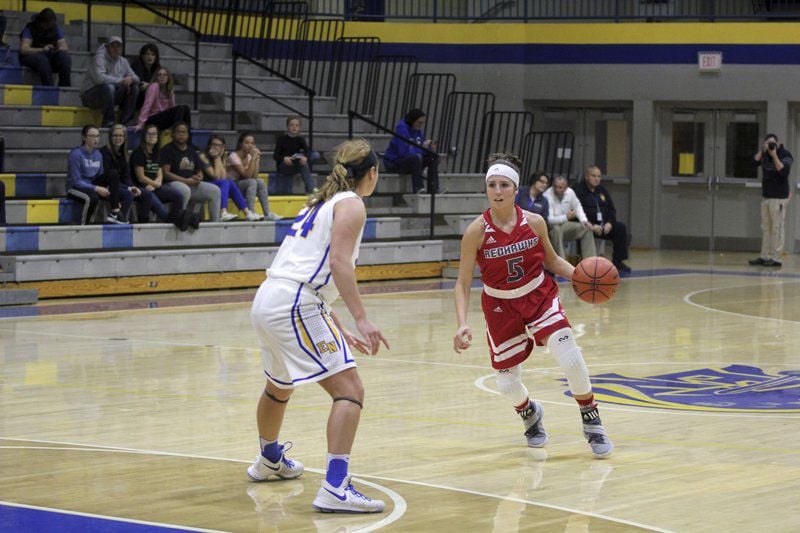 GREG KEIM | THE GOSHEN NEWSSenior Ashton Eillis of the Goshen RedHawks tries to work the ball against the defense of No. 24 senior Laine Allen of East Noble during a high school girls basketball game this past season at Kendellville. 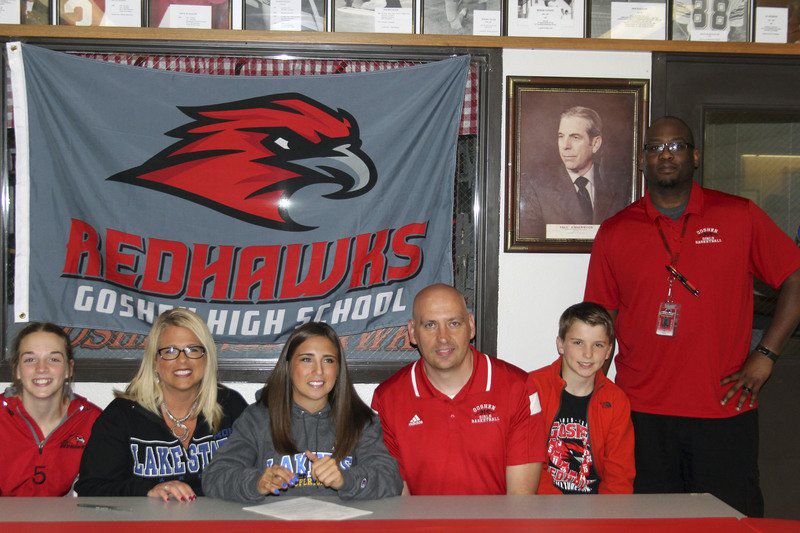 GREG KEIM | THE GOSHEN NEWSSenior Ashton Eillis of the Goshen RedHawks tries to work the ball against the defense of No. 24 senior Laine Allen of East Noble during a high school girls basketball game this past season at Kendellville.

GOSHEN — One of the finest point guards ever produced by the Goshen High School girls basketball program is taking her considerable talents to the next level.

“It’s a long way from home, but they were looking for a point guard,” Ellis said. “Once I met some of the players, the coaching staff and saw the campus I knew it was the place for me.”

Ellis completed her GHS prep career No. 2 in program history in career assists at 253 behind Aimee Swihart’s 304 (2009-13). She dished out 64 assists as a freshman, 66 as a sophomore, 85 as a junior and 38 this past season when she switched back and forth between playing the point and the shooting guard positions.

“Ashton is a unique player,” said Goshen coach Lenny Krebs, who is also Ellis' stepfather. “She is a good fit for Lake Superior since they are looking for a point guard. Ashton is not the type of player that is going to get you 15 to 20 points per game. She is the type of player that will not turn the ball over, will get the ball to her teammates in the right sports on the court and will play defense.

“She is fortunate she found Lake Superior, because not all schools are looking for a 5-3 point guard.”

“I was thinking about Ancilla because the coach guaranteed me playing time,” Ellis said.

Lake Superior, an NCAA Division II school founded in 1946, is located on Michigan’s Upper Peninsula. It is about a six-hour drive from Goshen.

The school is a long way from home, but Ellis already has a friend at the school in fellow incoming freshman Becca Villanueva, who is from Carroll High School near Fort Wayne. The pair met will playing AAU basketball.

“Once I heard she committed to Lake Superior, I decided to go there as well,” Ellis said. “I like the coach, love the campus, but what really drew me to the school was the team chemistry.”

The good friends are not only going to be roommates at Lake Superior, but will be competing for the starting point guard position. In some cases that could be a test of that team chemistry, but according to Ellis that is not the case between her and Villanueva.

“Becca and I know each other,” Ellis said. “We are not jealous of each other. We know the quality of player each of us is. The two of us push each other not to see who is going to get the starting spot but to make each other better.”

“My shooting range is one thing that needs to improve in college,” she said. “I need to learn how to shoot a step-back 3-pointer and how to pull up for my shot off the dribble.”

She worked on taking more shots from beyond the arc as a senior. Prior to last year, her high for attempts from long range were 51.

Her total of 65 made treys in her career is the sixth-best total in program history.

She also likes the idea of playing with a shot clock in college.

“I like to play at a faster pace,” Ellis said. “The faster pace reminds me more of AAU games.”

Ellis scored 216 points as a senior, leading the RedHawks to an 8-15 record. She finished 12th in career scoring with 644 points, two behind her teammate for the last four years, Aylissa Trosper (646).

Trosper is going to the University of Saint Francis in Fort Wayne to play soccer in the fall.

Ellis and Trosper share the career mark for basketball games played in their RedHawk tenure at 90.

According to Ellis, Lake Superior contacted her during her first two years at Goshen but then lost her contact information.

“The school reached out to me a couple of times, but then misplaced my information,” she said. “The coaches saw me playing in an AAU tournament and got in touch with Vernard Hollins, who runs the Always 100 AAU program. He deserves some credit for this, my college signing, since he has so many contacts with programs.”

Krebs agrees that playing AAU ball for Always 100 was helpful in Ellis ending up at Lake Superior.

“Last July we were on the road for 12 of 14 straight days, playing in Lexington, Kentucky, Nashville, Tennessee, and Washington D.C.,” Krebs said. “We went to an exposure tournament that was held at McCormick Place in Chicago. There were 800 teams entered in the tournament and they had 52 basketball courts set up.”

Ellis played three years of soccer at Goshen and ran track for one.

She will graduate Summa Cume Laude from Goshen and is ranked 18th in the senior class. She is a member of the National Honor Society, a senior leader in the Fellowship of Christian Athletes and a Stay in Bounds Ambassador.

She plans to study biology at Lake Superior. As of now, her career goal is to become an orthodontist.

“We will set how it goes,” Ellis said. “An orthodontist would require four years of dental school and another two years after that.”

Greg Keim is sports editor for The Goshen News and host of the News' online sports podcast.