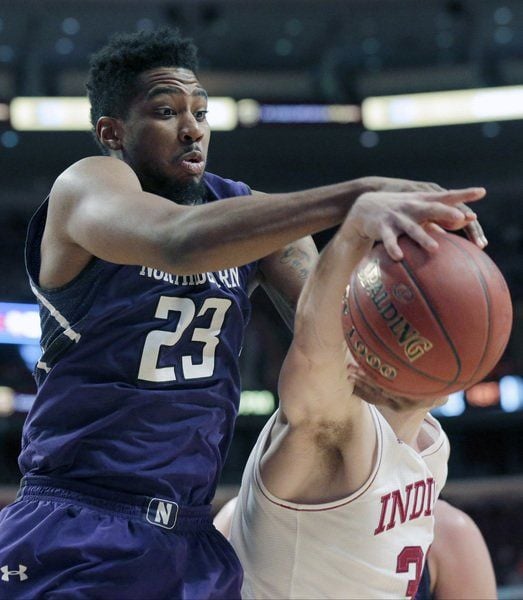 Northwestern's JerShon Cobb (23) and Indiana's Collin Hartman (30) battle for a rebound in the first half of an NCAA college basketball game in the second round of the Big Ten tournament Thursday in Chicago. (AP Photo/Nam Y. Huh) 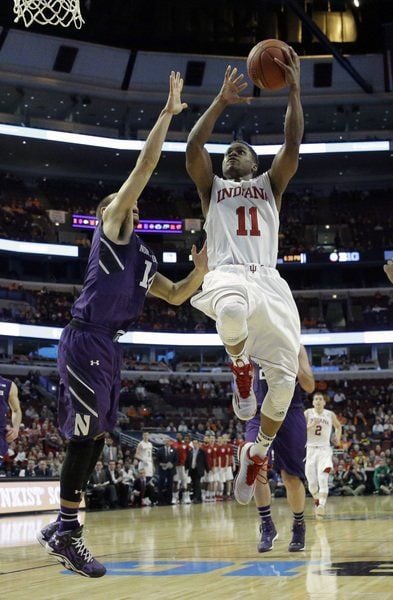 The Associated PressIndiana’s Yogi Ferrell (11) goes up for a shot against Northwestern’s Tre Demps (14) in the first half of Thursday’s Big Ten tournament game.

Northwestern's JerShon Cobb (23) and Indiana's Collin Hartman (30) battle for a rebound in the first half of an NCAA college basketball game in the second round of the Big Ten tournament Thursday in Chicago. (AP Photo/Nam Y. Huh)

The Associated PressIndiana’s Yogi Ferrell (11) goes up for a shot against Northwestern’s Tre Demps (14) in the first half of Thursday’s Big Ten tournament game.

CHICAGO — Whether Indiana did enough to secure a spot in the NCAA tournament, coach Tom Crean was not sure. His team made a loud case when it appeared to be fading from the conversation.

James Blackmon Jr. scored 25 points, Yogi Ferrell added 17 and Indiana boosted its NCAA hopes with a 71-56 victory over Northwestern in the second round of the Big Ten tournament on Thursday.

The Hoosiers rolled to an easy win after dropping three in a row and eight of 12. With fans calling for Crean’s job in recent weeks, Indiana (20-12) jumped out to a big lead in the early going and withstood a push by Northwestern (15-17) in the second half to advance to the quarterfinals. The Hoosiers will meet No. 8 Maryland on Friday.

Was this enough to push Indiana into the NCAA?

He pointed to the strength of schedule and the 20 wins, including 10 against the Big Ten after this victory, and he said he “would hope” that’s enough.

Blackmon, a freshman, finished one point short of his career high. He also had seven assists and six rebounds. Ferrell had five assists. Troy Williams grabbed 12 rebounds and had three blocks, and the Hoosiers dominated the Wildcats 42-25 on the glass. They had 20 offensive rebounds compared to five for Northwestern and a 20-3 edge on second-chance points.

“We wanted to attack the defensive boards, and that led to offensive boards, as well,” Blackmon said. “Our main thing was defense, and I think tonight was all about our mindset.”

Northwestern, which beat Indiana 2½ weeks earlier, never really threatened in this one. The Hoosiers led by as much as 18 while building a 36-22 halftime lead.

Blackmon scored 13, while Ferrell added 10 points. The Hoosiers outrebounded the Wildcats 25-14 in the half, pulling down 13 on the offensive end, and held them without a field goal for 9½ minutes during one stretch.

Northwestern got as close as 11 in the second half. But Blackmon hit two 3s during an 8-2 run that bumped Indiana’s lead 57-40 with 7:28 remaining.

There was a scary moment for Indiana midway through the half when Hanner Mosquera-Perea crashed to the floor and came up clutching his right knee, which already had a brace. He was trying to score inside when his knee hit the back of a prone Olah, causing Mosquera-Perea to flip onto his back. He stayed down for several minutes before being helped to the sideline, and his status for Friday’s game is in question.

“Hanner plays a big part in this group, but whoever needs to step up, I know they will,” forward Emmitt Holt said. “We’re all in this together, so whatever happens happens.”

Indiana: Ferrell hit three 3-pointers to extend his school-record streak with at least one to 63 games. ... This is Indiana’s third 20-win season in four years.

Crean on Collins: “Forget age. Chris is one of the best coaches around. He’s tremendous.”