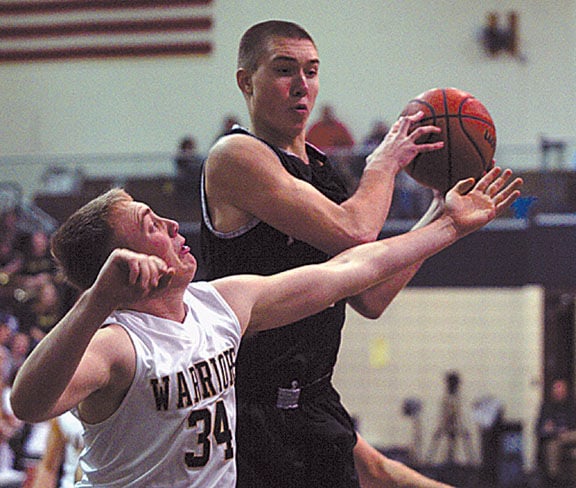 Zach Zurcher (4) of NorthWood grabs a rebound over Ryndan Aaron (34) of Wawasee during a game earlier this season. Zurcher is a key rebounder for the Panthers. 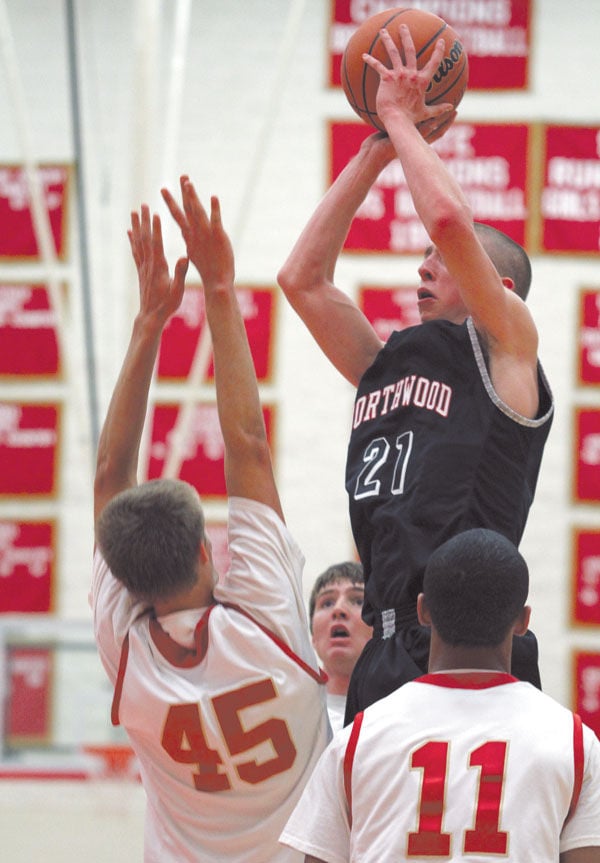 Zach Zurcher (4) of NorthWood grabs a rebound over Ryndan Aaron (34) of Wawasee during a game earlier this season. Zurcher is a key rebounder for the Panthers.

A slow start to the season didn’t keep the NorthWood Panthers from winning a Class 3A high school boys basketball sectional championship. The same thing can be said of the Fort Wayne Bishop Dwenger Saints.

The Panthers lost six of their first 10 games and were 6-11 heading into the final three contests of the regular season. NorthWood won those last three contests and extended its winning streak to six games by defeating West Noble 58-45 last Saturday to win the program’s fourth sectional championship.

“We made a point of staying focused on the sectional during the season,” 6-4 NorthWood sophomore Zach Zurcher said. “Winning sectional was a team goal from the beginning of practice.”

“We beat two teams in the sectional that we had lost to during the regular season,” 6-4 sophomore teammate Jonathan Wilkinson said. “That has helped our confidence. We are a pretty confident team heading into regional.”

The Saints opened the season by losing seven of their first eight games only to turn things around by topping Fort Wayne Concordia 46-40 in the championship of the Garrett sectional. Concordia was a 64-62 winner over Dwenger in the regular season.

Dwenger enters the regional with a five-game winning streak.

When NorthWood (12-11) and Bishop Dwenger (9-11) square off Saturday at 10 a.m. in the opener of the 3A regional at Blackford High School (located in Hartford City, north of Muncie on Ind. 3 in Blackford County) it will be the first time the two schools have ever clashed on the basketball court.

The second semifinal matches the No. 2 ranked Muncie Central Bearcats (19-3) and the No. 4 Norwell Knights around 12:30 p.m. The winners return for the championship at 8 p.m. and a berth in the northern semistate on Saturday, March 17 at either Lafayette Jefferson or Huntington North.

“Dwenger is a very skilled team that shoots the ball extremely well from the perimeter,” NorthWood coach Aaron Wolfe said. “Dwenger is not as big as Concordia would have been, but the Saints make up for that with some pretty formidable skills.

“I hate to put labels on teams, but Dwenger reminds me of Goshen in the fact they have skilled players that are capable of doing multiple things.”

The Panthers posted a 2-5 record this season in the always tough NLC.

Matt Kostoff is the coach of the Saints and he has a 168-114 record in this his 13th season as the school.

Lochbiler tossed in 14 points to lead the Saints in their sectional championship win.

“Dwenger posses a problem in guarding their shooters on the perimeter and staying in front of the players that like to drive to the basket,” Wolfe said.

“They also do a nice job of changing defenses. It’s going to be important for us to recognize the defense the Saints are in. Our team has been growing in the area of recognizing defenses all season.”

One of the keys to recognizing those multiple defenses will be the play of 5-10 senior point guard Derek Yoder. In NorthWood’s three sectional contests, Yoder dished out seven assists in a 40-35 win over Tippecanoe Valley, six in a 51-41 win over Lakeland and nine in the finale against West Noble all while not turning the ball over once.

Yoder leads the team with 98 assists, followed by Miller and Wilkinson both 37 and Zurcher 34.

NAPPANEE [mdash] Frieda Stutzman, 85, of Nappanee, died at 5 a.m. on Friday, May 14, at Miller's Merry Manor in Wakarusa, of natural causes. Frieda was born on Jan. 3, 1936, in Bremen, to Oscar H. and Katie (Schmucker) Schmucker. Mrs. Stutzman lived her entire life in the Nappanee area and m…