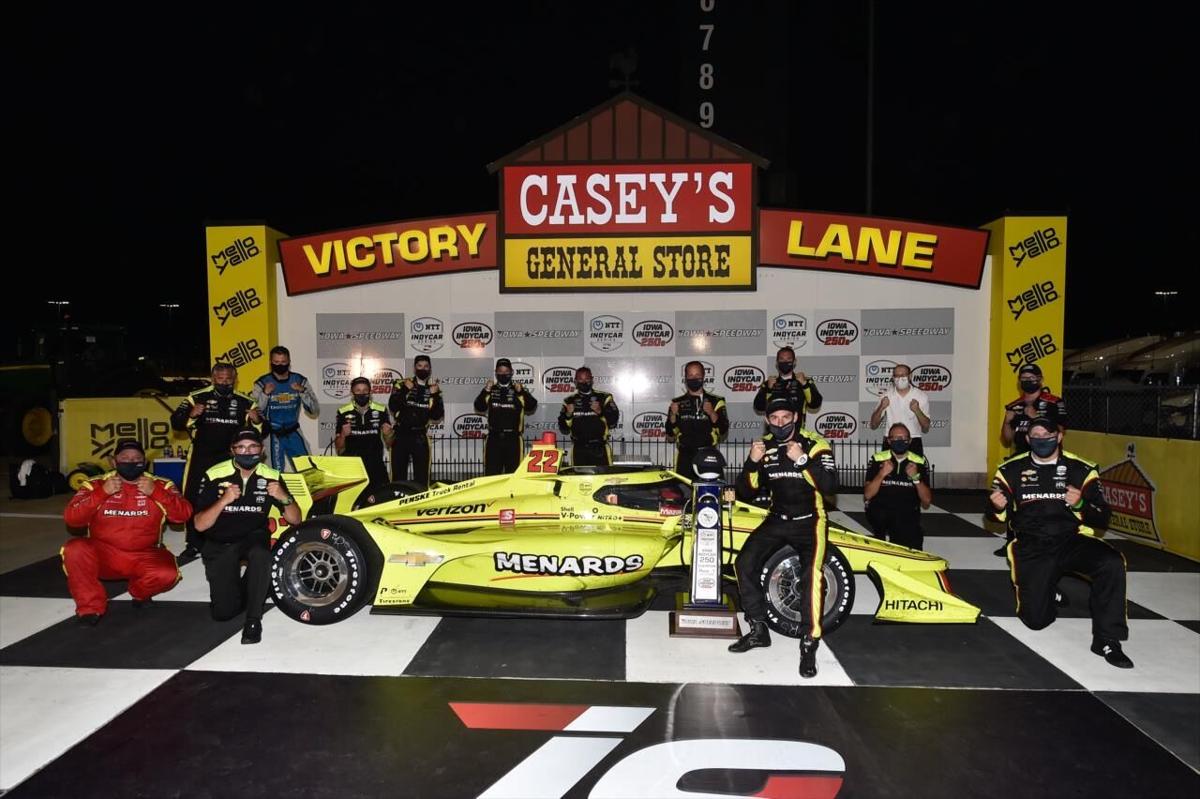 INDIANAPOLIS — Gavin Kercher had never been to the “Greatest Spectacle in Racing” until this year.

The closest the 2018 Northridge High School graduate had actually come to the Indianapolis 500, one of the most famous auto races in the world, was attending Carb Day when he was 10 or 11 years old.

This year’s race was held on Aug. 23, instead of its normal Sunday of Memorial Day weekend due to the COVID-19 pandemic and Kercher got an up-close-and-personal view of the event as a crew member for driver Will Power, one of the members of the famous Team Penske.

The team is owned by legendary driver Roger Penske, one of the more recognizable names in motorsports. This was Penske’s 50th Indy 500.

Kercher is a tire technician for Team Penske but also helps with the signboard (pit stop sign) and other duties.

“At the 500 my job was to spray water on the race car during refueling stops. The body of the car is so hot that if you don’t spray water on it any fuel that spills on the body could ignite,” Kercher said.

Penske Performance, Inc. is currently competing in the NTT IndyCar Series, NASCAR Cup Series, NASCAR Xfinity Series and IMSA WeatherTech SportsCar Championship under the Team Penske banner. Cars owned and prepared by Team Penske have produced 569 major race wins, 637 pole positions and 37 championships. In its 54-year history, the team has also earned 18 Indianapolis 500 victories, two Daytona 500 Championships, a Formula 1 win, overall victories in the 24 Hours of Daytona and the 12 Hours of Sebring, along with a win in Australia’s legendary Bathurst 1000 race.

The 38-year-old Power is in his 16th IndyCar Series season and his 12th season with Team Penske. The native of Australia won the 2018 Indy 500.

“Gavin’s career has taken off faster than I thought it would,” Gavin’s father Dave Kercher said. “We are excited he is with Will Power and they are going to let him run both IndyCar and IMSA. It’s crazy how things are going for him.”

Gavin’s mother, Paula, said, “We have always been NASCAR fans. We are now having to follow IndyCar. We are so excited about Gavin. He has put the work in and made the connections.

“He is getting along great with the teams. He is willing to chip in and do whatever is asked of him.”

Kercher’s job with Penske was pretty much by accident.

“I hadn’t really thought about anything like this in high school. Then I started hearing about this NASCAR Technical Institute in Mooresville, North Carolina,” he said. “Once I began checking into the school and seeing all of the scholarships that were available, my interest rose.

“I heard about an opening at Team Penske and sent them my resume.”

Gavin’s father knew his son would have to start at the bottom and work his way up.

“Gavin was an intern for Penske and doing all the small, dirty jobs,” Dave said. “Next year hopefully he will be a mechanic.”

Power is not the only famous driver Gavin has worked for, according to Paula Kercher.

“On the IMSA series, he has been on Pablo Montoya’s team,” she said. “A lot of people didn’t know what we were talking about when we mentioned IMSA but when we dropped the name Montoya it got their attention.”

Gavin talked about his experience at the Indy 500.

“It was unbelievable to be there. Every once in a while I had to pinch myself to make sure it was not a dream,” Kercher said.

Even though he is considered a part of the pit crew, Kercher doesn’t have to spend as much time practicing as other members of the crew do.

“Since I am not over the wall there is not as much practice involved,” he said.

Not only did Kercher experience his first Indy 500, but he was also a part of the first 500 without fans.

“There was a different feeling with no fans,” he said. “Without the fans being there is felt like any other day, but once you heard that famous command, ‘Gentlemen start your engines’ the blood started flowing.”

The song “Back Home Again in Indiana” was another part of the race day menu that got Kercher’s blood flowing.

“Since I’m from Indiana and the fact I was back in the state made it pretty special,” he added.

Due to COVID-19 restrictions, Dave and Paula Kercher were not able to attend the 500 to see their son.

“We had a big 500 party with all of our Penske paraphernalia,” Dave said. “The drivers had to feel it that the fans were not at the track. That had to be strange for them.”

“The winner’s circle could not be the same with no fans,” Paula said.

Kercher is also on Penske’s International Motor Sports Association (IMSA) team. IMSA is a lesser-known series but their season begins with the 24 hours of Daytona and ends with the 12 hours of Sebring.

“Races in IMSA are farther apart so there is more time to begin learning other aspects of the business,” Kercher said. “There are generally two or three weeks between races. It takes about a week to get all the tires and wheels ready for a race so after that is done they have been sending me to the body shop.”

Kercher’s interest in racing started when he raced snowmobiles on Lake Wawasee when he was 7 or 8 years old.

“That experience got me hooked on racing,” he said.

“The Career Center played an important part as to where I am at today,” he said. “I can’t say enough about the experience and how this all just kind of fell into place.

“I really didn’t have a plan in place until my senior year in high school.”

Kercher is realizing one of his dreams.

“I always wanted to be able to travel and now I can do that and it is on someone else’s dime,” he quipped.