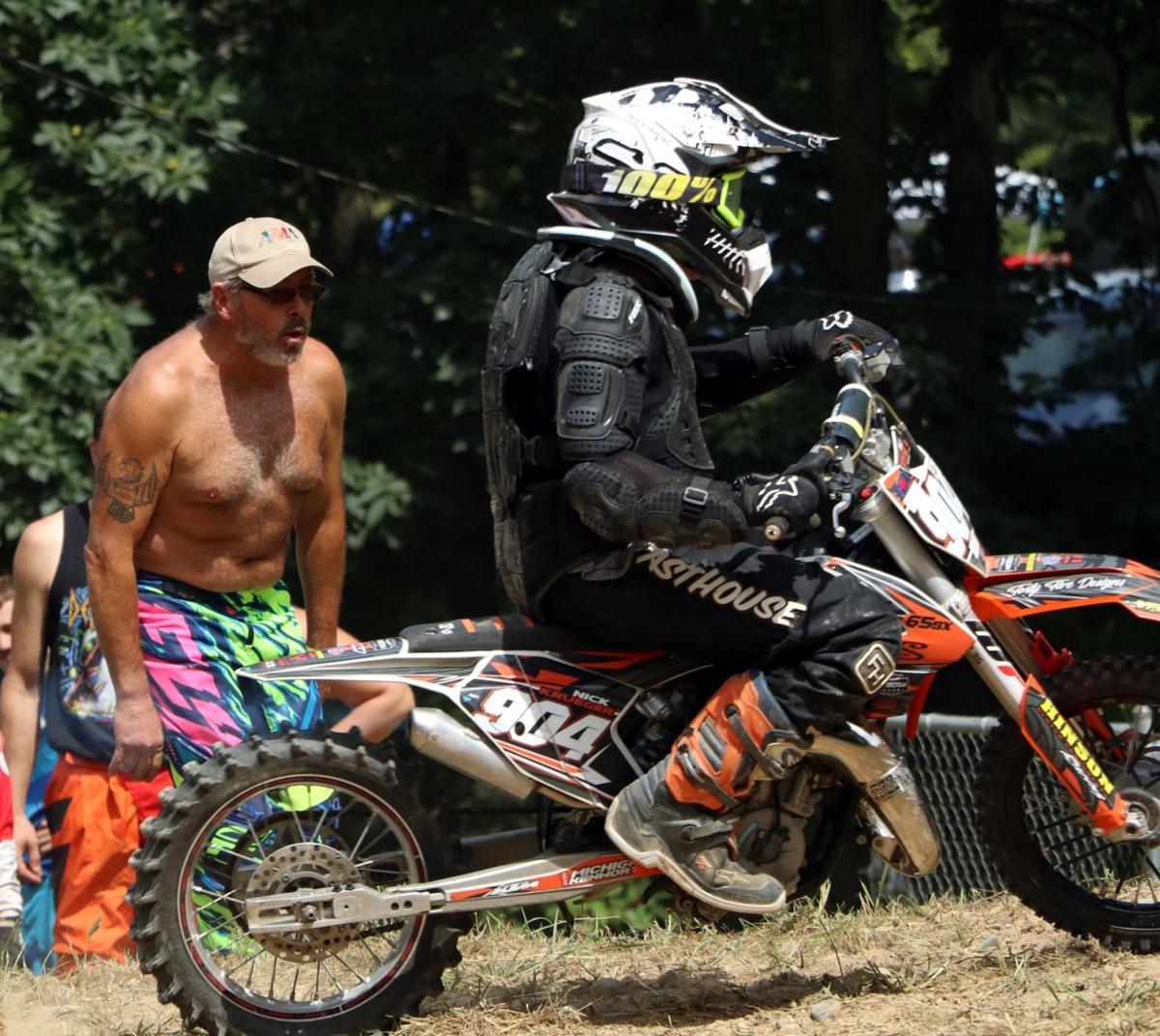 Michael Pulver, left, cheers on a young rider during the Goshen Iron Horsemen's Motorcycle and ATV Hillclimb Sunday in Middlebury. Pulver has been hillclimb racing competitively for 28 years and run his own series of events across the midwest and northeast every year. 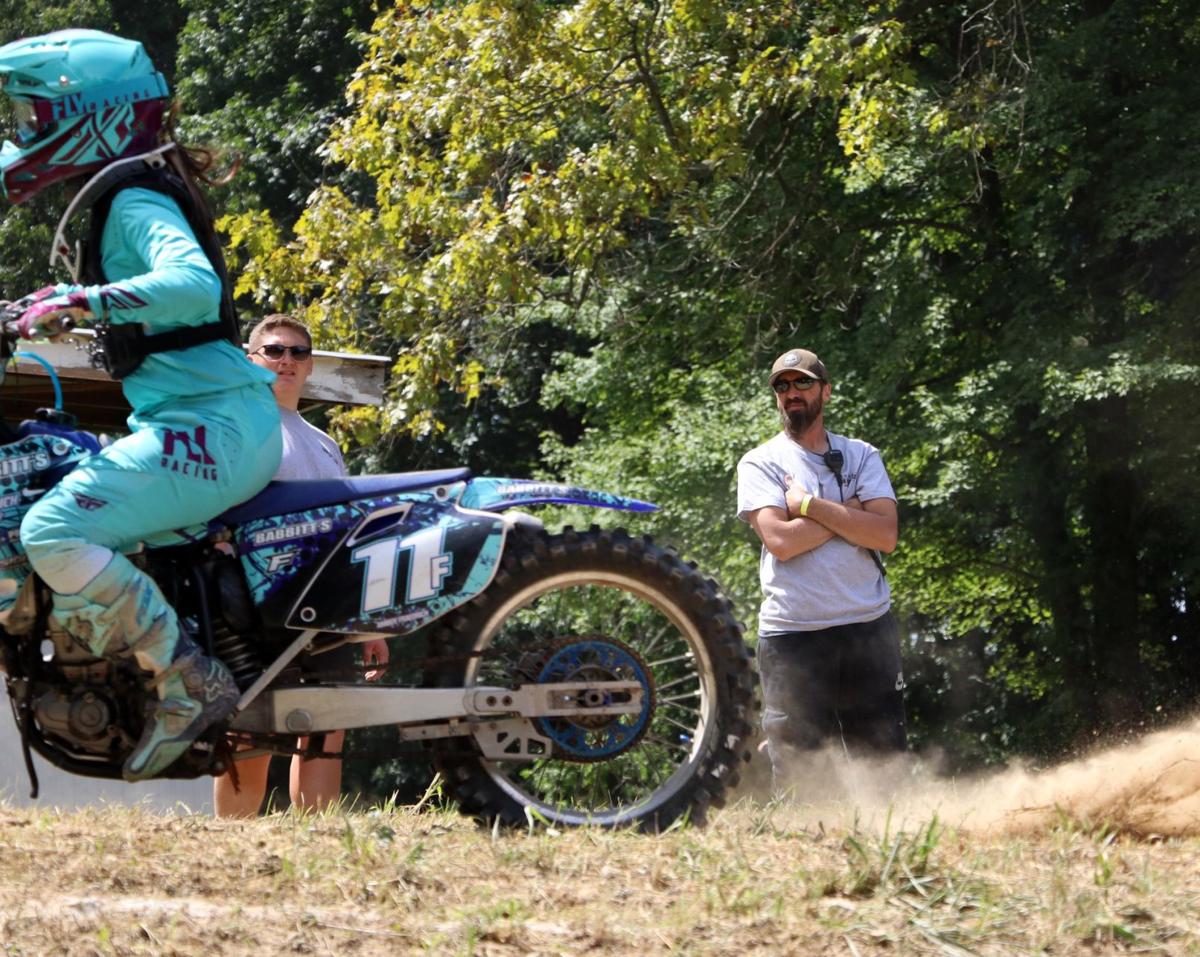 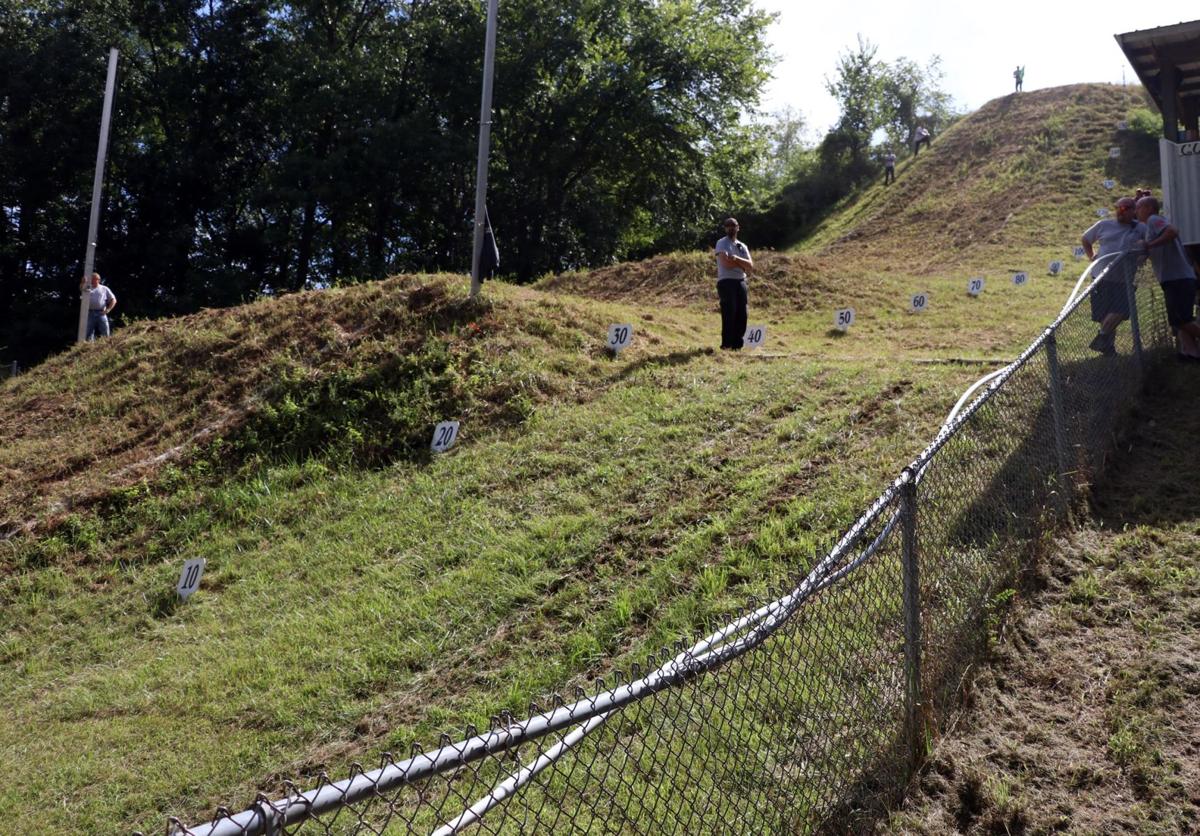 The 160-foot hill riders had to ride up at the Goshen Iron Horsemen’s Motorcycle and ATV Hillclimb Sunday in Middlebury.

Michael Pulver, left, cheers on a young rider during the Goshen Iron Horsemen's Motorcycle and ATV Hillclimb Sunday in Middlebury. Pulver has been hillclimb racing competitively for 28 years and run his own series of events across the midwest and northeast every year.

The 160-foot hill riders had to ride up at the Goshen Iron Horsemen’s Motorcycle and ATV Hillclimb Sunday in Middlebury.

MIDDLEBURY — Ten years ago, the Goshen Iron Horsemen Club asked Trever Schneider if he could help their organization. The hillclimbing club were struggling, financially, and needed some new perspectives to help save the organization.

Well, ten years later, Schneider has worked his way up to vice president of the Horsemen. The organization hosted their semi-annual Motorcycle and ATV Hillclimb Sunday off of S.R. 120 in Middlebury.

Schneider joined the organization 10 years ago because of family reasons.

“When I was younger, my dad was hurt. So, I ended up bringing my dad up here to watch the shows,” Schneider said. “When I heard it wasn’t doing really good, I didn’t want to see it go under. So, I stepped up and tried to help.

“And, 10 years later, we’ve got a lot of younger members now running. There’s a lot of officers, members who are all younger guys. We’re trying to change a few things here and there and keep a good show.”

One of the things the Horsemen have added is verticross racing, which made its debut Sunday. Traditional hillclimb racing is simple: whomever gets up the hill in the quickest time wins. The races are broken into multiple divisions based on engine size, age and gender.

Verticross, however, is not timed. It’s a 1-on-1 competition to see who can make it to the top of the hill the fastest. Whomever crosses the finish line first, wins. It’s an event designed to bring more excitement to the sport of hillclimbing.

“It’s actually a bunch of these crazy guys on these bikes that have been doing it at some of the other events,” Schneider said. “Some of them were outlaws and now AMA (American Motorcycle Association) races. Some of them have been AMA races, and now AMA decided to sanction a class to do so.

“So, we’re going to offer it for the first time on this hill. The guys are excited to do it — more excited than I am to officiate it.”

Schneider knows verticross will become a staple of all future Horsemen-ran events.

“I think if we do it this first time, I don’t think we’re going to be able to stop doing it,” Schneider said. “We’ve had guys asking for it for a couple of years now. Rules are meant to be bent, not broken, and so we had to wait for the AMA to make the rule to say we can do it.”

As Schneider alluded to, he does more than be the vice president of the Horsemen. He also serves as an official on race day. Schneider is standing mere inches away from the racers as the zoom past him, making sure they don’t go out of bounds. He also makes sure the bike’s power is cut off should a racer crash or fall of their bike on the hill. Schneider admits there’s been some close calls over the years.

“You have to be nervous for them. You have to worry about what happens to them,” Schneider said. “Other than that, we’re out here for a day of racing. Things happen.”

Schneider, 41, didn’t start participating in hillclimbing until some of his friends encouraged him to do so.

“I was always kind of a motocross (fan). Me, my brother, a bunch of our buddies, we were all kind of motocross (racers). Never really had seen the hillclimbs until a few other friends who were always apart of this kind of brought us in to it,” Schneider said. “It was a different thing to do and something fun on the bike, so kind of drew us in. We were all young and dumb at the time. It was something cool and fun to do.”

One of the racers competing Sunday, Michael Pulver, has been racing competitively for 28 years. He was a professional hillclimber from 1992-2000, winning the AMA’s Rookie of the Year award in 1992. He had been hillclimbing long before turning pro, though.

“The challenge was you go riding in the woods and you climb the bad hills,” Pulver said. “And then I joined AMA, and in the back of the AMA (brochure) they have the schedule listed and it said ‘hillclimbing.’ And I said, ‘hillclimbing? I like to go climb all the hills.’ So, I went to my first hillclimbing and been hooked ever since.”

Pulver, 55, runs a circuit of races called the Northeastern Hillclimb Challenge. Racers are staged all across the Midwest, along with one in New Hampshire.

Pulver said what makes hillclimbing so unique is the creativity riders can have with their bikes.

“The difference between our sports and some of the others is the different classes we run. Basically, it’s just the engine size and ride the rest the way you want,” Pulver said. “You can set it up in whatever way you want, so there’s a lot of innovation. There’s a lot of techniques and a lot of skill that people bring. A lot of bikes are different. It’s not something you go buy at the store.”