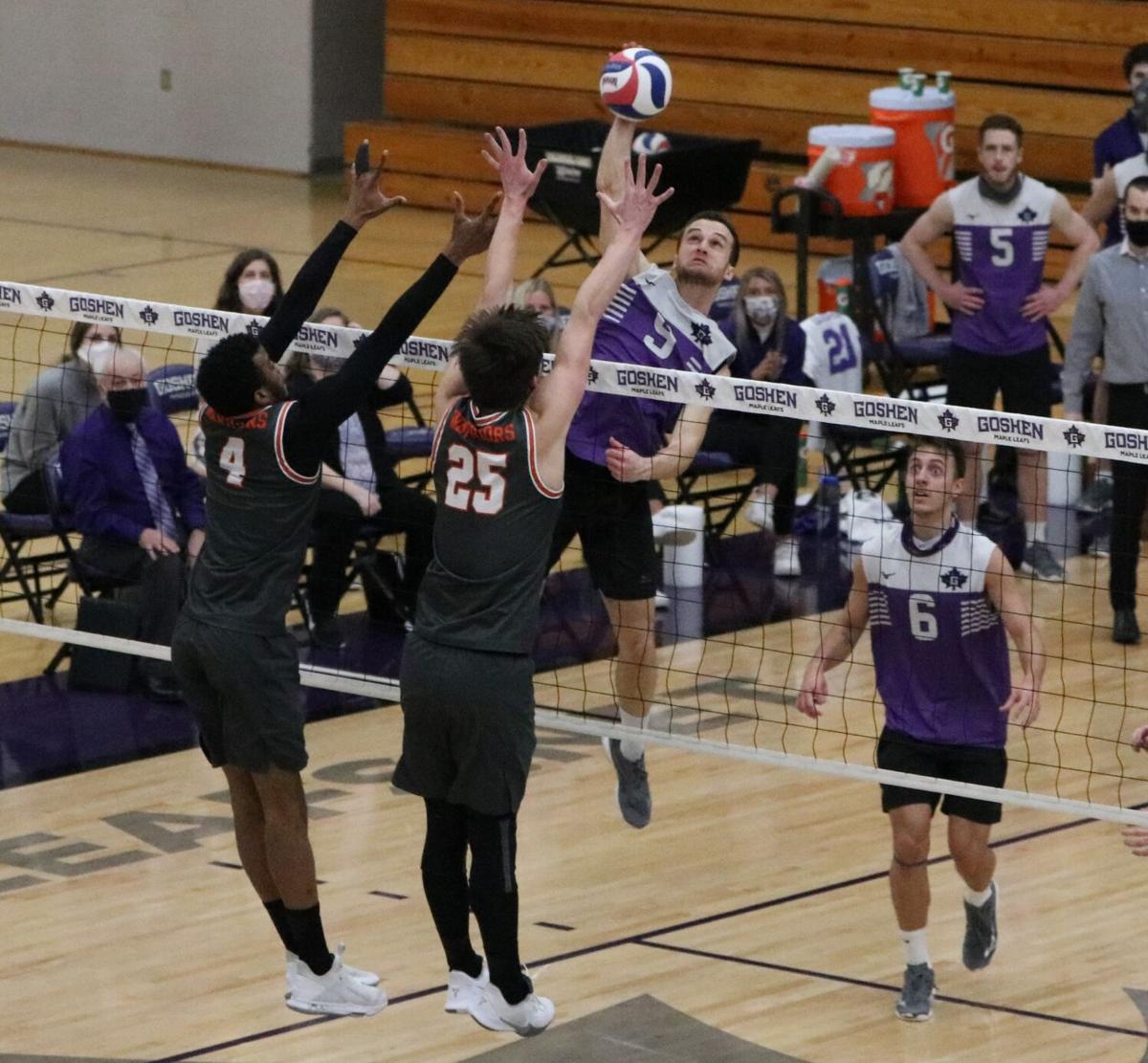 Goshen College junior Alexander Rabadzhiev (9) goes up for a kill in the first set of the Maple Leafs’ four-set loss to Indiana Tech Tuesday at Gunden Gymnasium in Goshen. 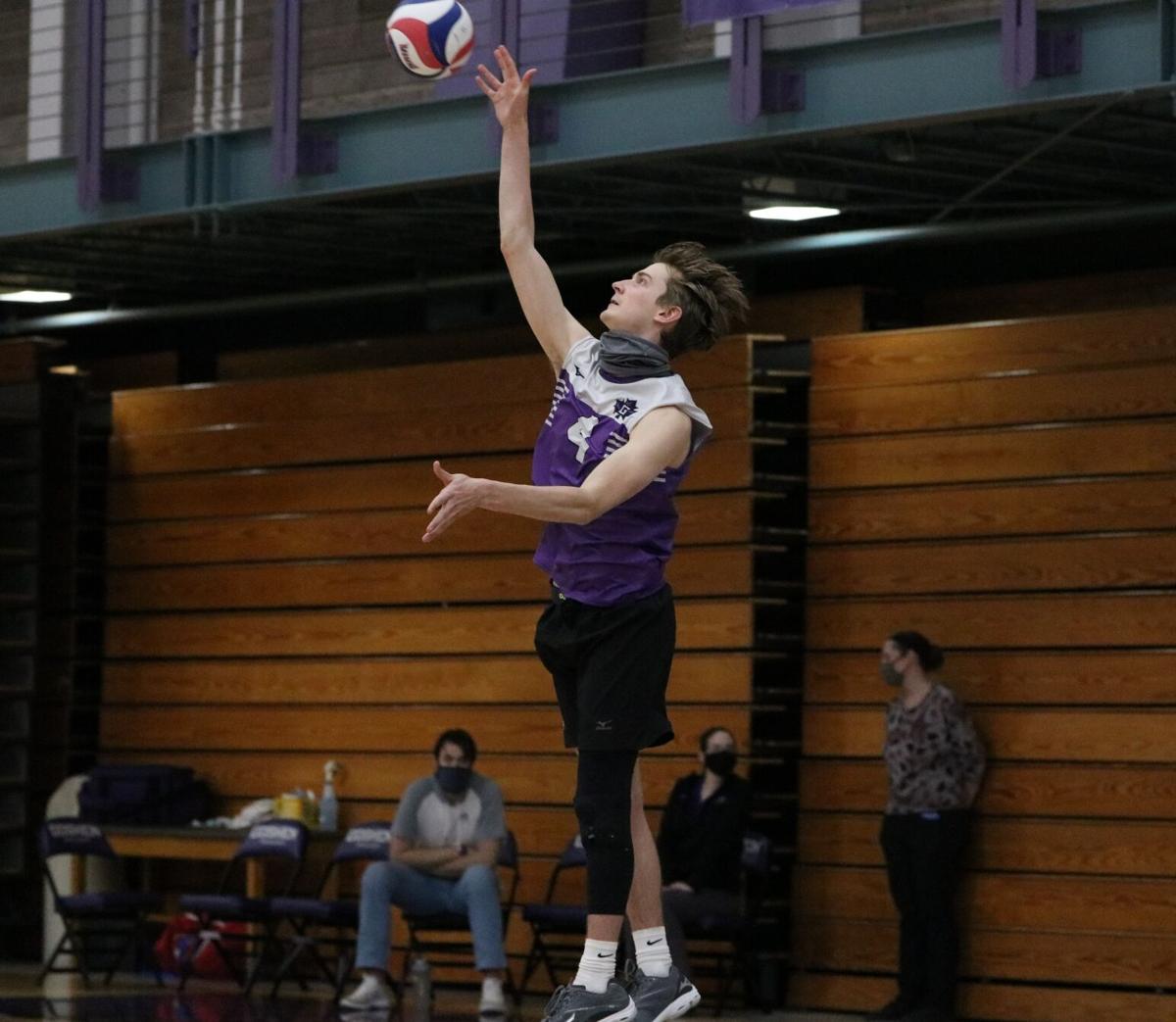 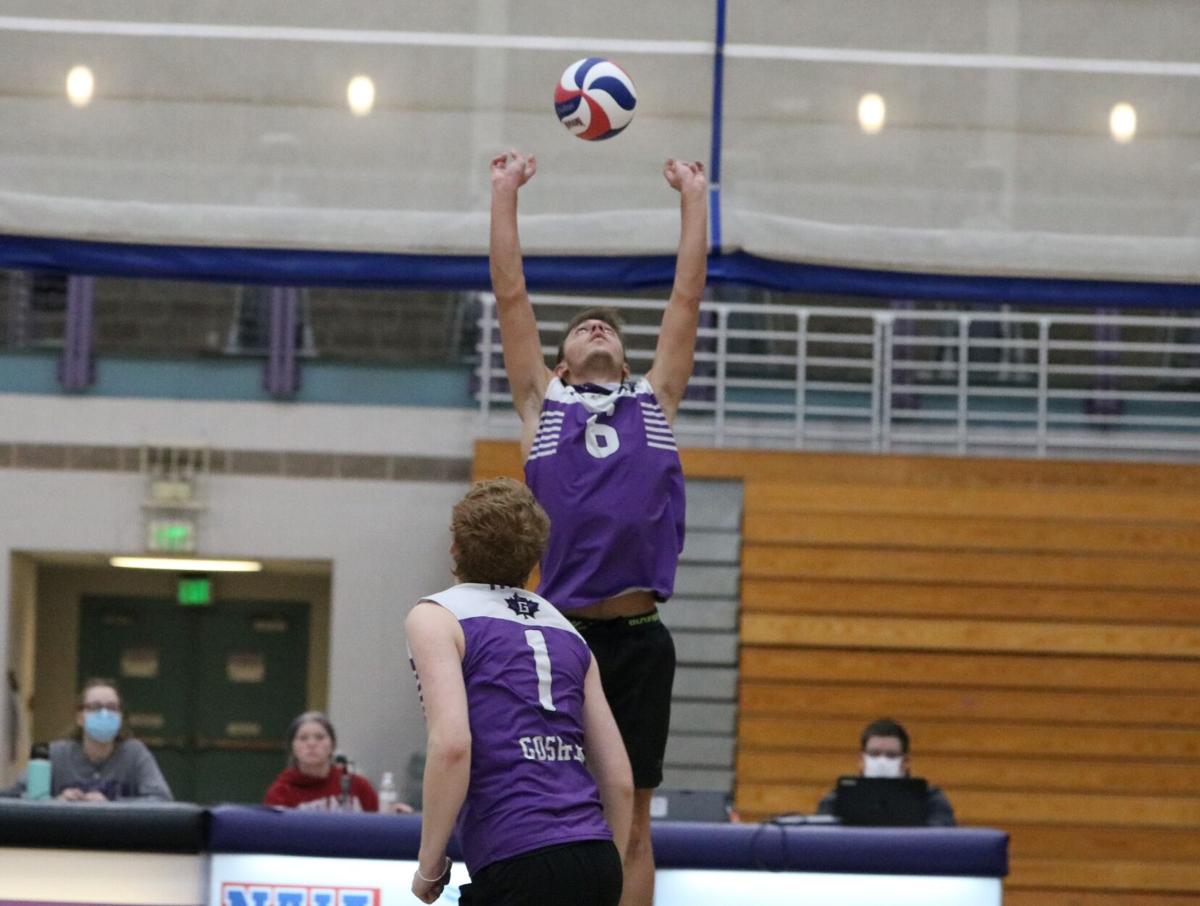 Goshen College junior Alexander Rabadzhiev (9) goes up for a kill in the first set of the Maple Leafs’ four-set loss to Indiana Tech Tuesday at Gunden Gymnasium in Goshen.

GOSHEN — After a marathon of a first set that the Goshen College men’s volleyball team won, 33-31, it seemed like the No. 14 Maple Leafs were going to ride that momentum to a victory over No. 10 Indiana Tech.

The first set was a back-and-forth affair, with the score being tied at 22, 23, 24, 25, 26, 27, 28, 29, 30 and 31 down the stretch. During that period, the Maple Leafs had five potential set points, while the Warriors had four. Tech led 31-30, but then three-straight Goshen points — capped off by a kill from junior Alexander Rabadzhiev — gave the Leafs the first-set victory.

Hitting struggles would cost Goshen in the second set. After recording 19 kills and only three errors in the first set, the Maple Leafs had just nine kills while committing seven errors in the second. Despite this, the set was tied at 22 before the Warriors rallied off three-straight points to tie the match.

“It was just our guys mishitting,” Daugherty said. “It just comes down to us doing our job. All of our players have to do their jobs and better the ball. We just didn’t do that.”

The power of Indiana Tech eventually caught up to Goshen, as the Warriors won the third set before overtaking the Leafs in the fourth. Daugherty said he thought his team looked tired in the final set.

Tech was also flawless in the final set as well, recording 14 kills and just two errors. They had an attacking percentage of .545 in the set, the highest either team recorded in any set during the match.

“Those are the (kills) that we have to affect with our block, and we had 8.5 blocks at the end of the third set,” said Daugherty, whose team didn’t record a block in the fourth set. “And, normally we’re a good blocking team — like I said, in the first set, we out-blocked them 4-1. We should’ve been out-blocking them, but our middles were struggling. That’s the honest truth; they weren’t there. And, if I have my guys sitting 1-on-1, we tell them to hit them hard. Their guys were sitting 1-on-1 a lot and hit it hard.”

Offensively, Indiana Tech was led by sophomore Daynte Stewart’s 28 kills. Senior Chase Christiansen had 14, and sophomore Chandler Davis tallied 55 assists. It was a big win for the Warriors, as they improve to 9-2 overall and 5-1 in the Wolverine-Hoosier Athletic Conference.

Goshen College, which had won five in a row coming in, fall to 10-5 and 4-2 in the WHAC. Rabadzhiev led the team with 23 kills, while junior Lucas Sauder had 13. Senior Michael Wahl had 42 assists to lead the Leafs in a losing effort.