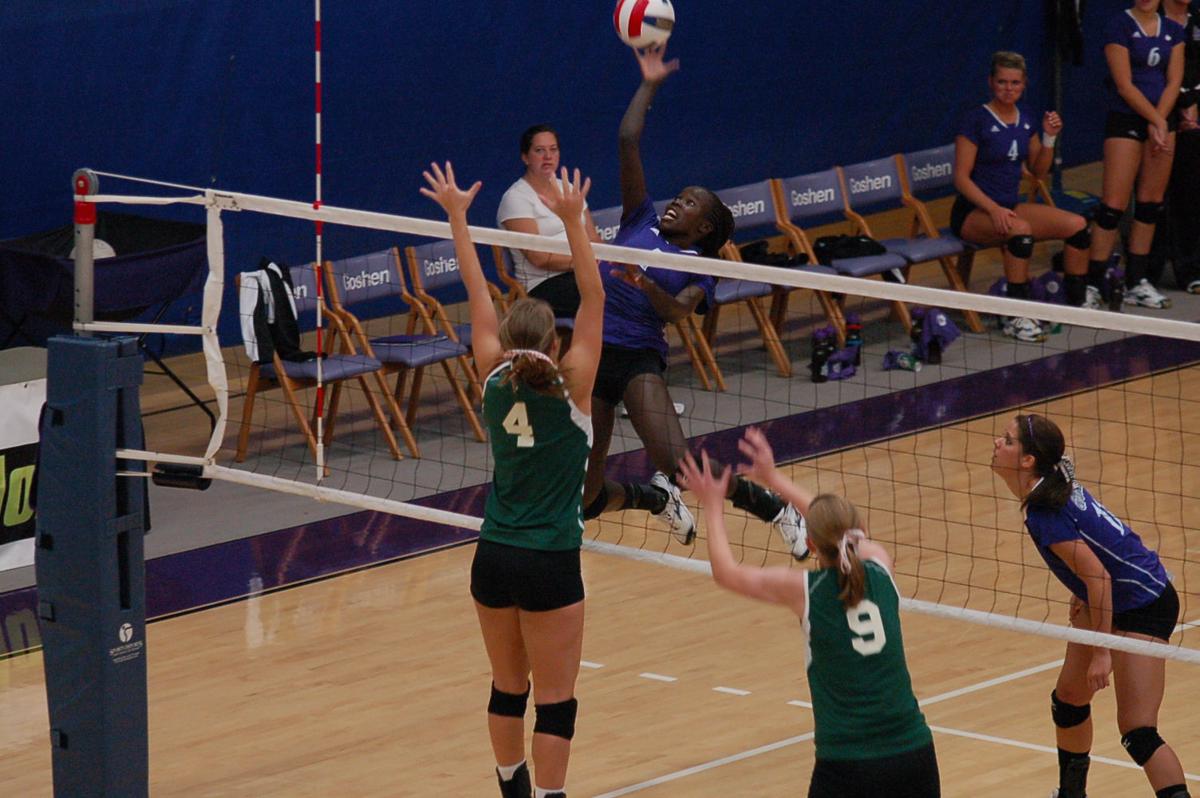 Goshen College volleyball alum Peni Acayo, seen here going up for a kill, is the program’s only player to win conference player of the year and selected to the NAIA All-American team. 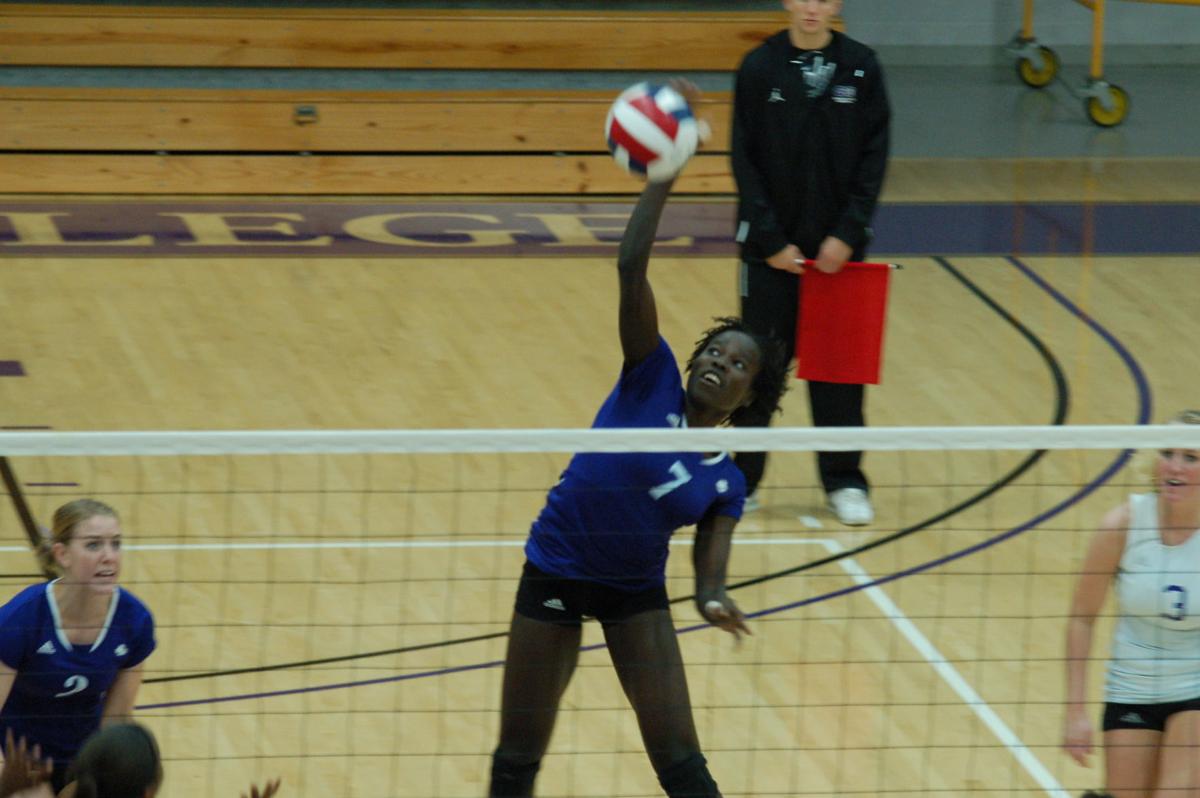 Peni Acayo is Goshen College’s all-time leader in kills with 2,015.

Goshen College volleyball alum Peni Acayo, seen here going up for a kill, is the program’s only player to win conference player of the year and selected to the NAIA All-American team.

Peni Acayo is Goshen College’s all-time leader in kills with 2,015.

GOSHEN — The distance between Peni Acayo’s hometown and Goshen College is far — more than 7,500 miles in fact.

Acayo, now Peni Laker, was able to find a second home during her time at Goshen College — especially on the volleyball court. The Kampala, Uganda native re-wrote the record books during her four seasons with the Maple Leafs, becoming the only player in program history to earn NAIA All-American honors and win a conference player of the year award.

The East Africa native found out about Goshen College when a teammate of hers started playing at Taylor University in Upland. Taylor and Goshen play in the same conference — which was called the Mid-Central College Conference at the time and is now the Crossroads League — and Acayo would receive mail from her friend that talked about her volleyball experiences.

“The more I heard about her experiences, it somehow started to feel like something I’d be interested in exploring,” Acayo said. “Thankfully, at the time, my game had picked up really well that I had been invited to join the national team in Uganda, and that was like the highest honor.”

With her game getting better, Acayo sent a recruiting video to Goshen College. She liked GC because it was the only school that offered a pre-architecture degree.

Her recruiting video was a little unorthodox, however.

“When I shot it, we were playing on dirt and grass and there were cows grazing in the background,” Acayo said. “It’s just not what you would consider to be a high-level recruiting video.”

What stuck out to head coach Jewel Lehman, though, was Acayo’s jumping abilities. Lehman signed Acayo ahead of the 2007 season.

Being a relatively unknown player, Acayo burst onto the scene her freshman year. In 29 matches played, she tallied 473 kills, 53 aces and 189 digs. She earned first-team All-MCC honors for her play, an honor she would receive all four seasons at Goshen.

“I think people didn’t plan or expect me to be as dominating as I ended up being,” Acayo said. “When people were scouting before games, I wasn’t on anybody’s radar. I just showed up as a freshman and was having the best time ever.”

After having two strong seasons to start her career, things really took off for Acayo her junior year. Under a new head coach in Jim Routhier, Acayo became one of the top players in the country. Her 554 kills were ranked 11th nationally and her 4.29 kills/set average was eighth-best. She also tallied 45 aces and 437 digs. She was named first-team NAIA All-American and the Mid-Central Conference Player of the Year, despite the Maple Leafs going 17-16 and 4-4 in conference play.

“I think by my junior year, I knew what to expect,” Acayo said. “I knew it wasn’t going to easy and I just sort of took off. I learned about the playing field and my opponents a little bit more. … I think I was genuinely feeling that, not only do I belong in the States, but I can be a force to be reckoned with.”

By the time her senior year started, Acayo had already set the program record for most career kills. Now, it was about getting to 2,000 for her career.

The mark was set in the final regular-season match of the year against St. Francis. She entered the game with 1,994 kills, needing just six to get to 2,000. She wound up tallying 11 kills in the 3-0 sweep of the Cougars, getting to 2,005 for her career. She would record 10 more kills in the season-ending loss to Grace College in the MCC tournament, finishing with 2,015 kills for her career.

“During the seasons, I honestly can’t say I worked towards hitting a certain number or certain percentage,” Acayo said. “When I saw the genuine excitement and celebratory nature of the moment with my teammates and coaches, I think I started to really understand the gravity of that accomplishment.”

Acayo not only dominated on the volleyball court, but she had a stellar track and field career as well, as she was the national runner-up in the triple jump for both the indoor and outdoor seasons of 2010. Having one year of eligibility left after finishing her time at Goshen, Acayo went to Kent State University in Ohio and triple jumped for them for a season.

Since college, Acayo has spent her adult life in academia. She was a research associate at Notre Dame for two years before moving to St. Louis to work at Washington University, where she is a “graphic designer, researcher and assistant professor of communication design,” according to her website.

Acayo married her husband, Kyle Laker, in 2013. The couple has two children: a daughter, Christina, 3, and son Joshua, 1.