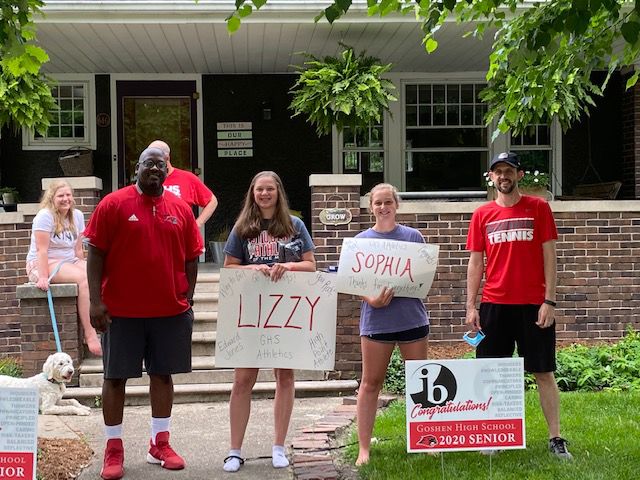 Lizzy Kirkton, second from the left, has been named the Edward Jones Female Athlete of the Year at Goshen High School for the 2019-20 school year. Pictured with her are Goshen girls basketball coach Shaun Hill, her twin sister, Sophia Kirkton, and Goshen girls tennis coach Daniel Love. 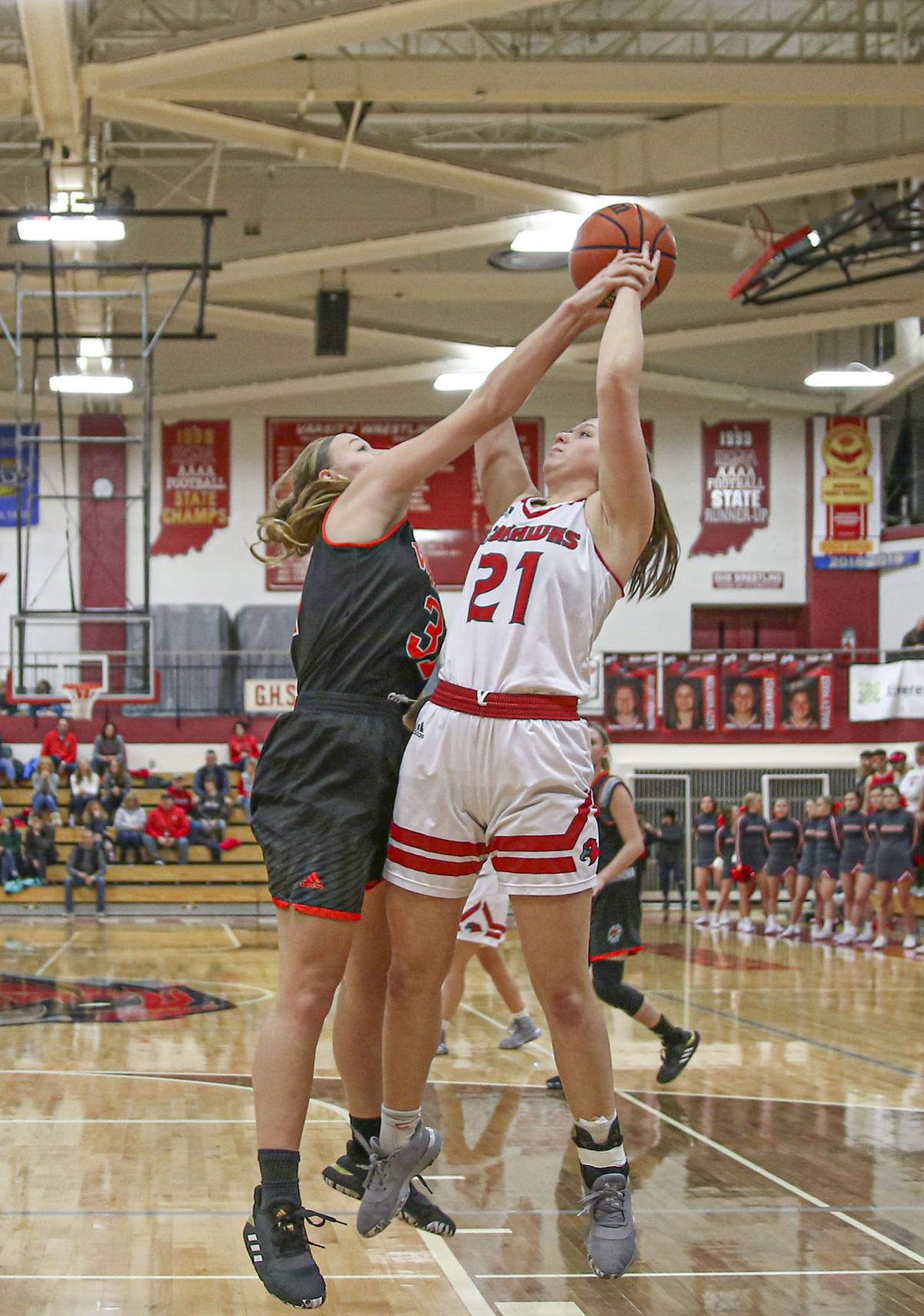 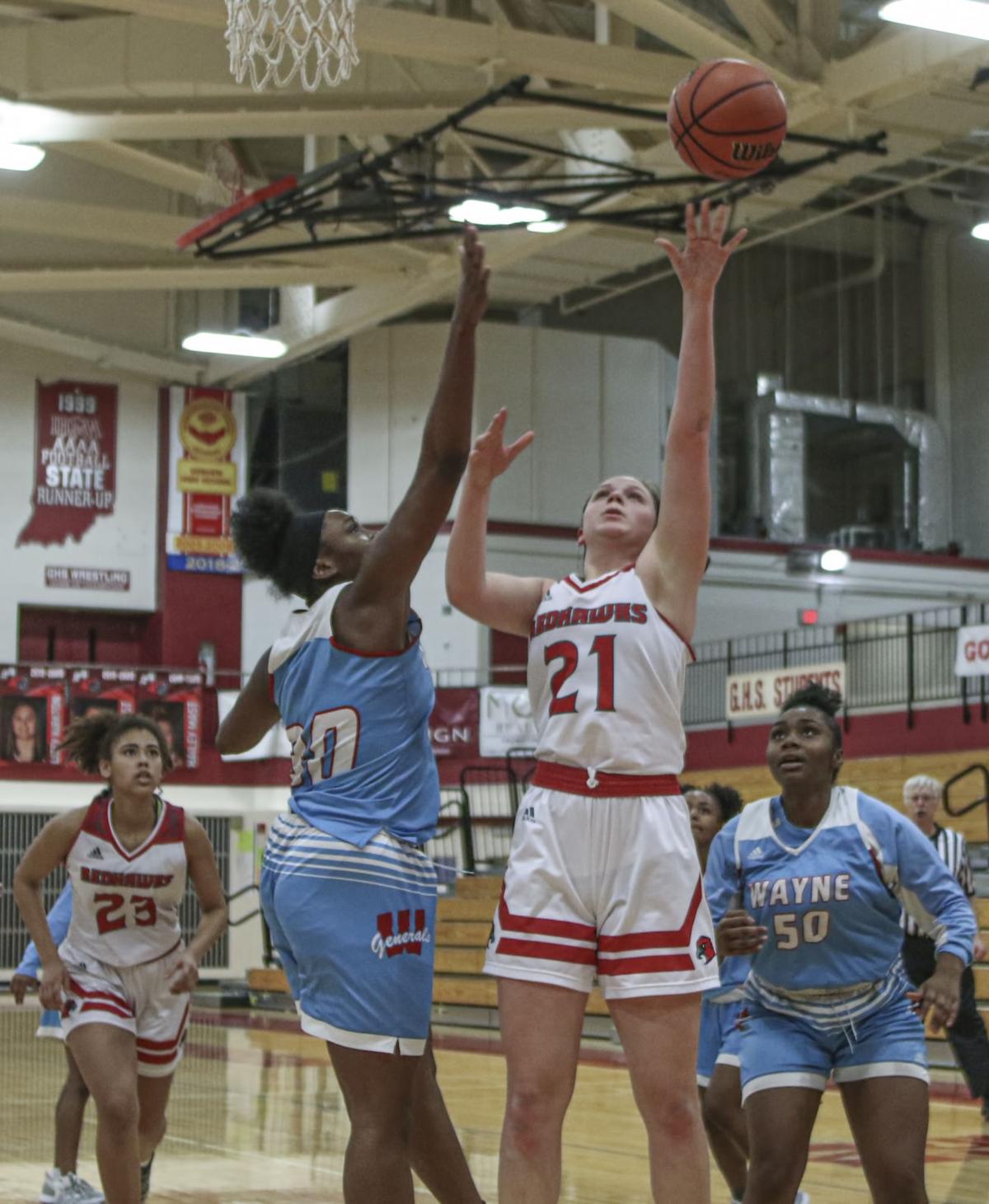 Senior Lizzy Kirkton (21) puts up a shot around Fort Wayne Wayne’s Shabrea O’Quinn (30) as Goshen wins a first-round contest in the Goshen Holiday Tourney this past girls basketball season.

Lizzy Kirkton, second from the left, has been named the Edward Jones Female Athlete of the Year at Goshen High School for the 2019-20 school year. Pictured with her are Goshen girls basketball coach Shaun Hill, her twin sister, Sophia Kirkton, and Goshen girls tennis coach Daniel Love.

Senior Lizzy Kirkton (21) puts up a shot around Fort Wayne Wayne’s Shabrea O’Quinn (30) as Goshen wins a first-round contest in the Goshen Holiday Tourney this past girls basketball season.

GOSHEN — When your principal says he would do well with a whole school full of students like you, that is some noteworthy praise.

For that reason, as well as being outstanding in the classroom and in the athletic arenas, is why Lizzy Kirkton has been named the Edward Jones Female Student-Athlete of the Year at Goshen High School for the 2019-20 school year.

“I was not expecting this. It is nice to know all of my hard work is paying off,” Kirkton said. “The monthly award was great but this is something else. The $1,000 scholarship will help with my college education.”

Kirkton is ranked seventh in the GHS senior class with a 4.25 grade-point average. She plans to attend Eastern Mennonite University in Harrisonburg, Virginia.

“Lizzy is a great student and an outstanding person. She does not take the easy courses but instead is taking the challenging ones,” Goshen High School Principal Barry Younghans said. “She is an exceptional person. A young person, who is mature for her age and a good leader.

“We would do well with a school full of students like her.”

“She will be a student we will look back on someday and be proud of the fact she attended Goshen High School,” he said. “She has a social attitude. She works well with others and I think she will do good things for our community and the world in general.”

Kirkton is a member of the National Honor Society, Student Council, Stay In Bounds Ambassadors and her church youth group.

She was the Kiwanis Scholar-Athlete as a senior in both basketball and volleyball.

She was an outside hitter and inside hitter for the RedHawks volleyball team. She won the Barb Zook Mental Attitude Award, the Versatile Skills Excellence Award and was a team captain last fall.

“I like both sports and have had good experiences in each of them,” Kirkton said. “But I enjoy volleyball more.”

“Harrisonburg is a college town,” she said. “One of the things I like about the area is you can take a walk through the downtown one day and the next day take a hike in the mountains.”

“It was really cool to see how excited we were after the win,” Kirkton said. “The players, especially the ones in my class, were very close. We did a lot of things together.”

“I learned different things from each coach,” she said.

“It says a lot about the type of person Lizzy is that she was able to have as much success in volleyball as she did considering the number of coaches she had,” Younghans said.

Kirkton scored 107 points as a senior for the Goshen girls basketball team that finished 18-6 overall, 3-4 in the Northern Lakes Conference. She netted a total of 339 points in her career.

“Lizzy was a great leader, one you could always count on to lead by her example of working hard,” Goshen girls basketball coach Shaun Hill said. “She was great working with our younger players.

“Lizzy was a solid post player and a physical athlete. She was hard to stop from 15 feet in,” Hill said. “She was a good basketball player, but she has a passion for volleyball. I’m glad she found a school where she can pursue her interest in that sport.”

Kirkton recalled a highlight basketball win over Fairfield by a 39-38 score on a game-winning shot by Megan Gallagher.

“We didn’t get off to a great start but had a great comeback. That was the point of the season you could see the team starting to come together. We were gaining confidence,” Kirkton said.

One of the things Kirkton remembers most about the contest was the postgame locker room celebration.

“We were all screaming in the locker room and then coach Hill walked in. We quieted down when we saw him but he let out one of the loudest screams I’ve ever heard,” she said.

“The fact she probably didn’t play as much as she wanted in her senior season says a lot about her as a person. She was able to accept her role on the team, even if it was not as a star,” Younghans said. “Lizzy improved so much from her freshman season to this year. It was fun to watch her develop.”

Lizzy is the daughter of Todd and Allison Kirkton. She has a sister, Haley, and a twin sister, Sophia. Her twin played volleyball and tennis at Goshen. She is also going to EMU to play volleyball.