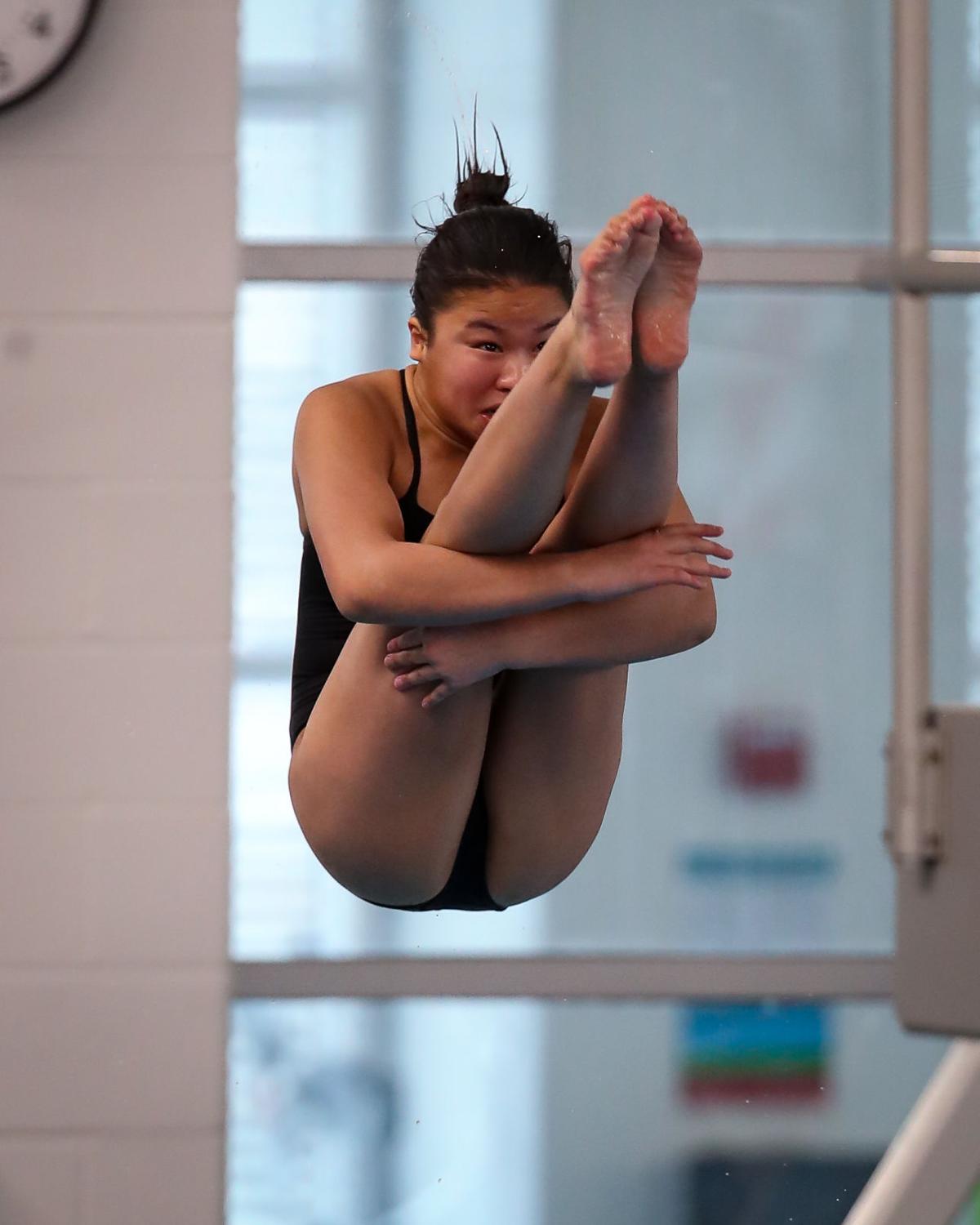 Then-Northridge sophomore Kaitlin Simons completes a dive during her win in the IHSAA swimming sectional one-meter diving competition at the Elkhart Health & Aquatic Center in this Feb. 9, 2020 file photo. Simons was adopted from China by her parents, Laura and Gerald, when she was 11 months old. 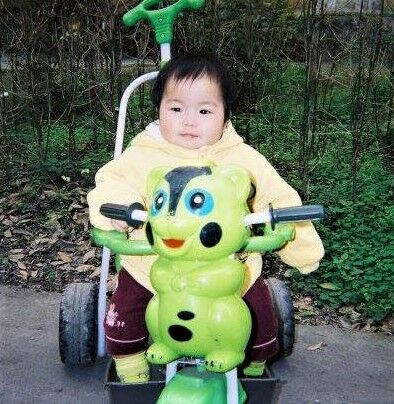 Kaitlin Simons as a baby at the {span}Chinese Social Welfare Institute (SWI) in Yulin City, Guanxi Province, her orphanage. She was adopted and brought to the United States by Laura and Gerald Simons just before her first birthday.{/span} 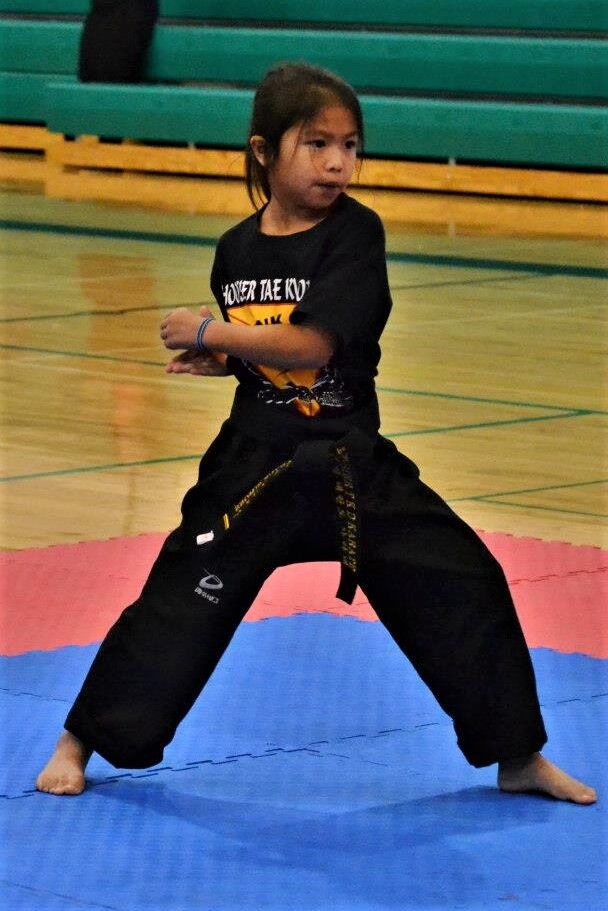 A young Kaitlin Simons was an avid participant in Taekwondo before going full-time into diving. She earned her junior black belt at seven years old. 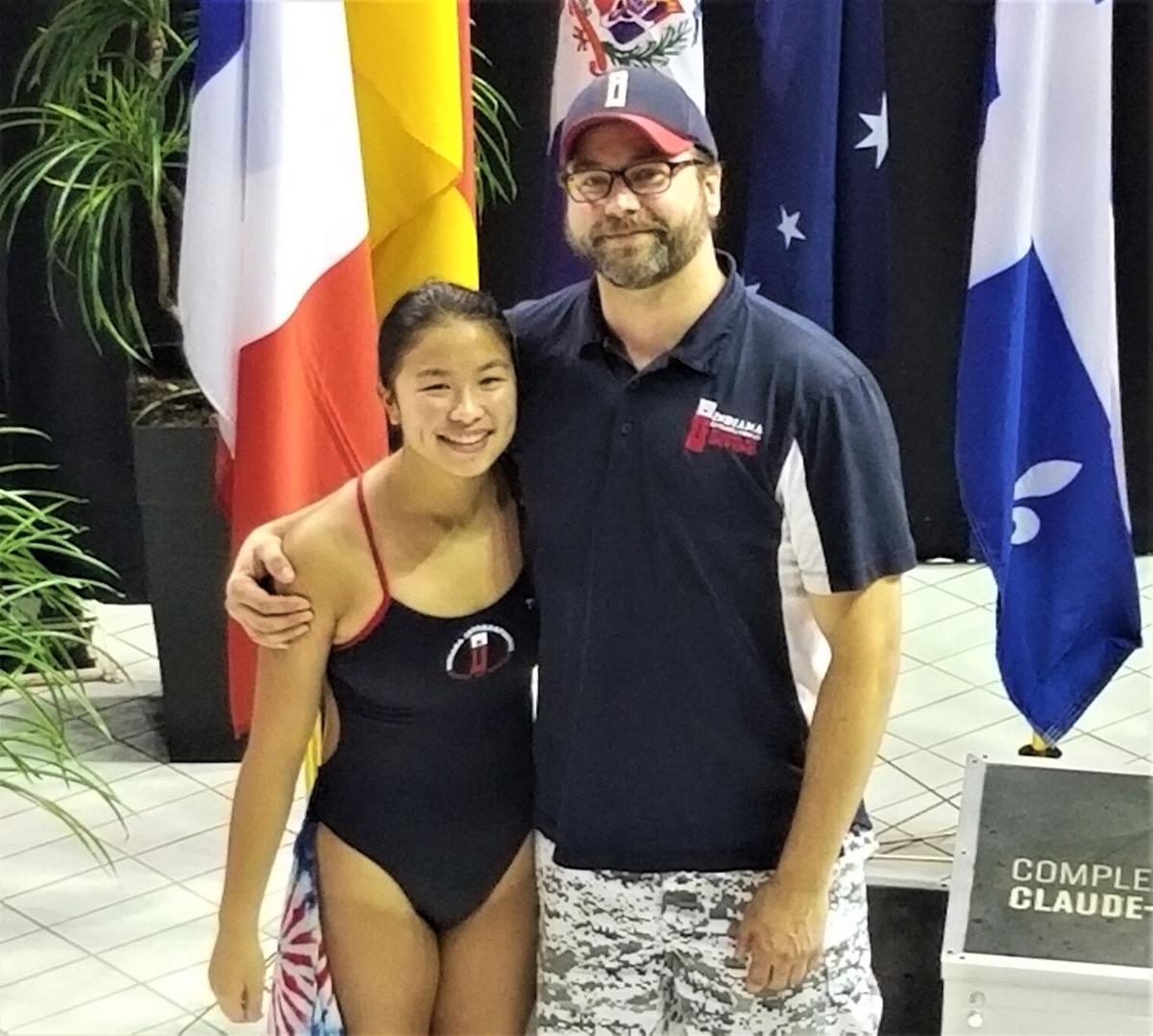 Kaitlin Simons and her diving coach, Bob Burns, in Montreal during the International CAMO Invitational in November 2019. She would go on to finish ninth during the finals of the one-meter event. 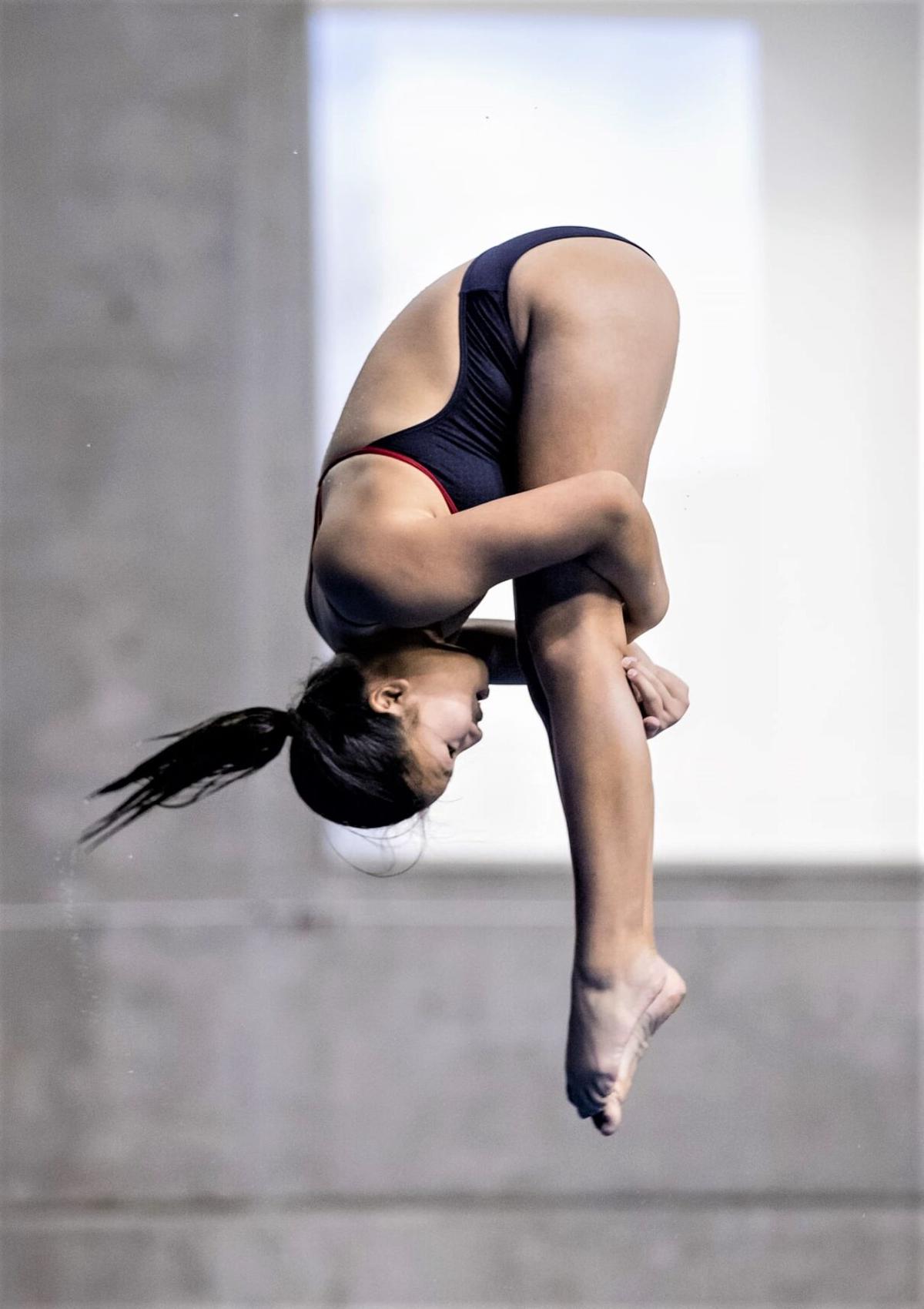 Then-Northridge sophomore Kaitlin Simons completes a dive during her win in the IHSAA swimming sectional one-meter diving competition at the Elkhart Health & Aquatic Center in this Feb. 9, 2020 file photo. Simons was adopted from China by her parents, Laura and Gerald, when she was 11 months old.

Kaitlin Simons as a baby at the {span}Chinese Social Welfare Institute (SWI) in Yulin City, Guanxi Province, her orphanage. She was adopted and brought to the United States by Laura and Gerald Simons just before her first birthday.{/span}

A young Kaitlin Simons was an avid participant in Taekwondo before going full-time into diving. She earned her junior black belt at seven years old.

Kaitlin Simons and her diving coach, Bob Burns, in Montreal during the International CAMO Invitational in November 2019. She would go on to finish ninth during the finals of the one-meter event.

Northridge junior Kaitlin Simons is the definition of a “scholar-athlete.”

An accomplished diver, she’s finished in the top 10 at state all three years of her high school career, and as a member of her club team, she’s competed internationally in Canada.

Academically, she’s an award-winning, straight-A student with a love of science and aspirations to study some form of sports medicine in college.

On top of all of that, she hopes the Olympics will be one of the next goals after high school to be checked off the list.

“Competing at that high of a level would be amazing,” Kaitlin said. “It would be such a great opportunity, and in the end, it’s truly my goal.”

With everything she’s accomplished already and will accomplish in the future, Kaitlin’s path in life could’ve been drastically different if it weren’t for one major decision by her parents — her adoptive parents, that is.

Laura and Gerald Simons made the life-altering decision — after already having two children of their own — of adding a third to the family.

For the married couple, the choice to adopt a young child from the other side of the world has been more rewarding than they could’ve ever imagined.

“Both (Gerald) and I really wanted the experience of raising a daughter,” Laura said. “We felt that would kind of complete the family. … We’re obviously extremely proud of her. She’s accomplishing more things than either my husband or I ever had a chance to do at her age.”

Becoming a member of the Simons family has presented Kaitlin with unwavering support to do what she loves and achieve her goals.

“I’ve been very, very lucky to have parents like mine,” Kaitlin said. “I was adopted by such a great family, and I really couldn’t imagine being with anyone else or being in a different family at all.”

When the thought of adopting a daughter became a serious endeavor for the Simons household, another family connection turned out to be a key reason for wanting to adopt overseas.

“I actually have a cousin that was adopted from Korea, when she was five,” Laura said. “We just thought it’d be nice if there was some sort of family connection or link if we went with Korea.”

Laura and Gerald contacted Bethany Christian Services in Indianapolis to begin the process, but the cap for how many adoptions Korea allows had already been reached for the year at that point, and the fact that they already had two children made them unlikely to be considered in the future anyway.

Well, everything happens for a reason.

Not wanting to wait around, the Simons began weighing other options and decided to go through China next.

“With the process with China, you have to put together a dossier,” Laura said. “Usually that takes around six months, but because I’m a teacher, and the timing fell at the beginning of the summer, I devoted 100% of my time to that and essentially made it my job for the summer. I was able to get all of the documents and paperwork done in three months.”

The way the timing was setup, referrals were being made six to eight months after the dossier’s were received by China. Laura and Gerald were eventually approved, and after the detailed process of traveling to China, adopting Kaitlin there, getting the visa and readopting her in the United States, Kaitlin was officially a Simons.

“It just happened that it was exactly one year to the day of us starting the process and her being placed in our arms,” Laura said. “March 24. … The whole thing was a pretty detailed process. The dossier you put together makes it feel like you’re writing a novel, because it’s just so much.”

Kaitlin was around 11 months old when the adoption process ended. Her new parents were both thankful and excited to get an opportunity to celebrate her first birthday.

“We definitely got lucky with the way the timing fell,” Laura said.

Starting at a young age, Kaitlin’s desire to be active became apparent in a potentially unsettling way from a parent’s perspective.

“The first time we realized how athletic she was, was probably when she was almost two years old,” Laura said. “I went out to the garage with her outside just to grab the phone, and by the time I got back, it couldn’t have been more than five to 10 seconds, she had already gotten herself up into the apple tree in our backyard. After that, we immediately put her in gymnastics. It was kind of the compromise. You stay out of the tree, you’ll get to do gymnastics.”

As Kaitlin’s age multiplied, so did the sports she participated in.

“I really love to be active,” Kaitlin said. “I’ve actually played a lot of sports. I’ve done taekwondo, softball, soccer. Just a lot of other sports in general.”

A year later though, she discovered the sport that would end up meaning the most.

At eight years old, Kaitlin was introduced to diving. By the time she was a preteen, it was the only sport she devoted her time too.

“I guess when I started training with the high schoolers around 11,” said Kaitlin when asked when she started to realize how great of a diver she could be. “Just watching them and seeing how good they were, and then them telling me that I was really good helped boost my confidence.”

SUCCESS IN THE SPORT

Since Kaitlin made the choice to devote all of her time and effort athletically to diving, she’s truly made a name for herself with a number of goals ahead.

Since 2015, she’s been a mainstay on the USA diving regional and national circuits. In high school, over the last three seasons, she’s earned multiple First Team All-Northern Lakes Conference nods, multiple sectional and regional championships and has finished top 10 (ninth in 2019, fifth in 2020 and third in 2021) at the IHSAA State Championship three-straight seasons.

With one more chance to be crowned the top diver in Indiana, Kaitlin is set on getting there.

“I’m really shooting for first next year,” Kaitlin said. “I’m 100% determined to get a banner put up at the school. (Northridge) only has one right now, and I want my name up there next.”

To get there though, Kaitlin may have to go through a teammate. Jiselle Miller, also a junior diver at Northridge, has competed with Kaitlin at state all three seasons, coming in fourth this season.

Both Jiselle and Kaitlin have developed so well over the years in large part due to an experienced high school diving coach that has doubled as a club coach as well.

Bob Burns has been at the foot of a diving well for over 20 years, splitting time coaching between Concord and Northridge during that span. He’s also a coach at the Indiana International School of Diving, a club team that has 14 different training locations throughout the state — one of them being at Northridge in Middlebury.

“Definitely,” said Burns when asked if he believed Kaitlin had the potential to be a great diver early on. “As a coach, you develop the ability to see certain things in certain athletes and Kaitlin’s always been very athletic. … She’s always been very talented in that respect, so it was pretty evident that if given time, Kaitlin could become a very talented diver.”

In 2019, as a member of the club team, Kaitlin qualified for the International “CAMO” Invitational in Montreal, Canada, which took place at one of the main aquatic centers used during the 1976 Montreal Summer Olympics. In her first ever international competition, she made the finals behind a sixth-place finish during the preliminary round. She’d go on to place ninth in the one-meter event.

“It was super cool,” Kaitlin said. “It was my first time out of the country since being adopted. It was really cool being able to meet people from other countries like Great Britain and Australia, as well as seeing all the other divers with their different diving styles. They were all so good, and that really pushed me to be better.”

With only one season left of high school diving remaining, preparations for the future have begun, and the pool will still be a big part of that. As of now, Kaitlin’s spoken with Big Ten powers Ohio State and Nebraska about potentially joining in 2022.

There’s still time between now and that point, and a lot can happen in more than a year’s time. But one thing’s clearer than the pool Kaitlin jumps into: she and the supporting cast around her believe in her ability to achieve anything she puts her mind to.

“I think up to this point, she’s been very good about the decisions she’s made,” Laura and Gerald agreed. “She’s always been very precise, as far as her reasoning, so whatever she decides in the future, it’s up to her and all on her shoulders. … The biggest thing is that she be happy with whatever she chooses to do. If we can provide the support to allow (our kids) to develop in life, then we’ve done our job.”