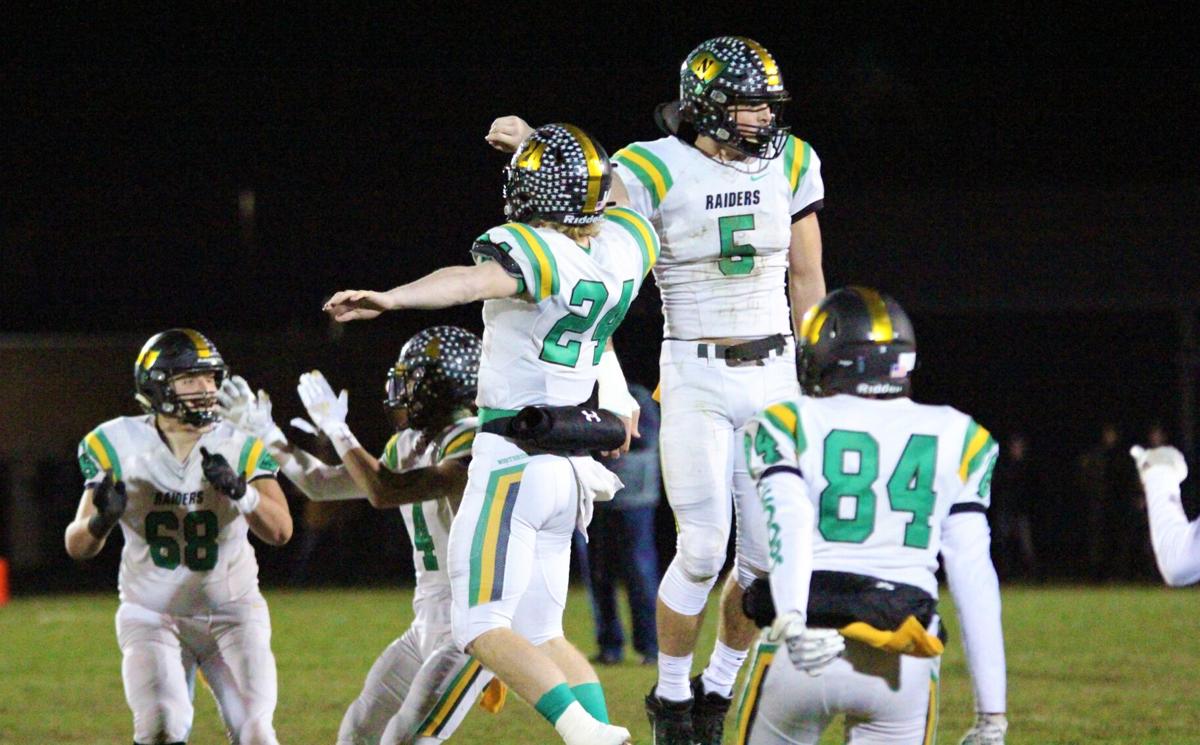 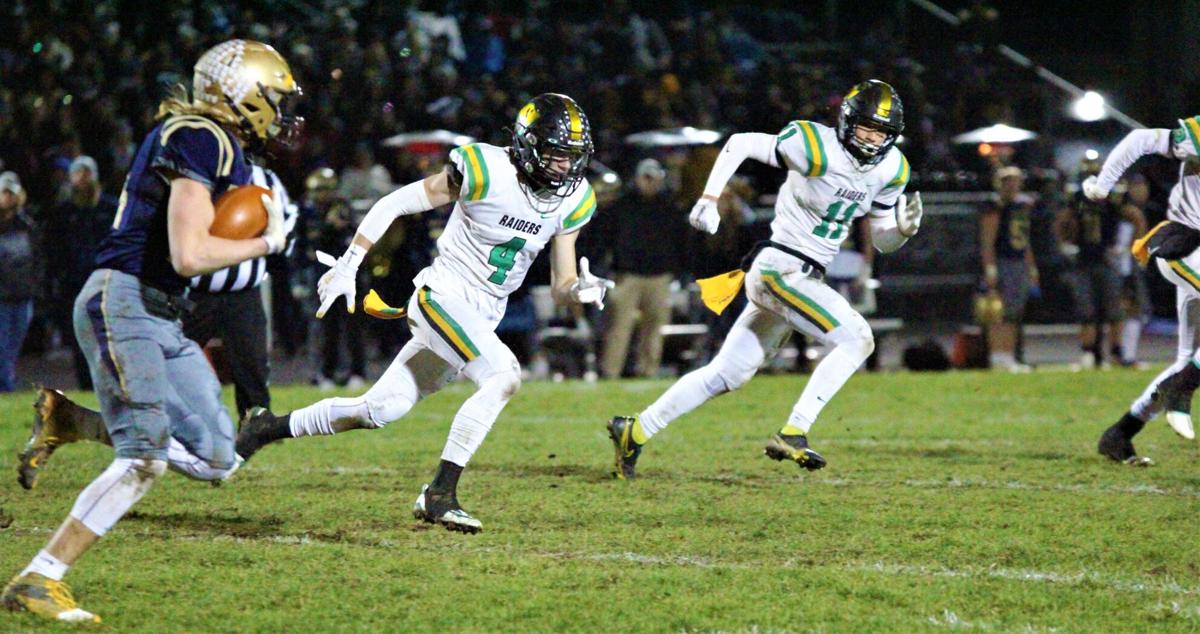 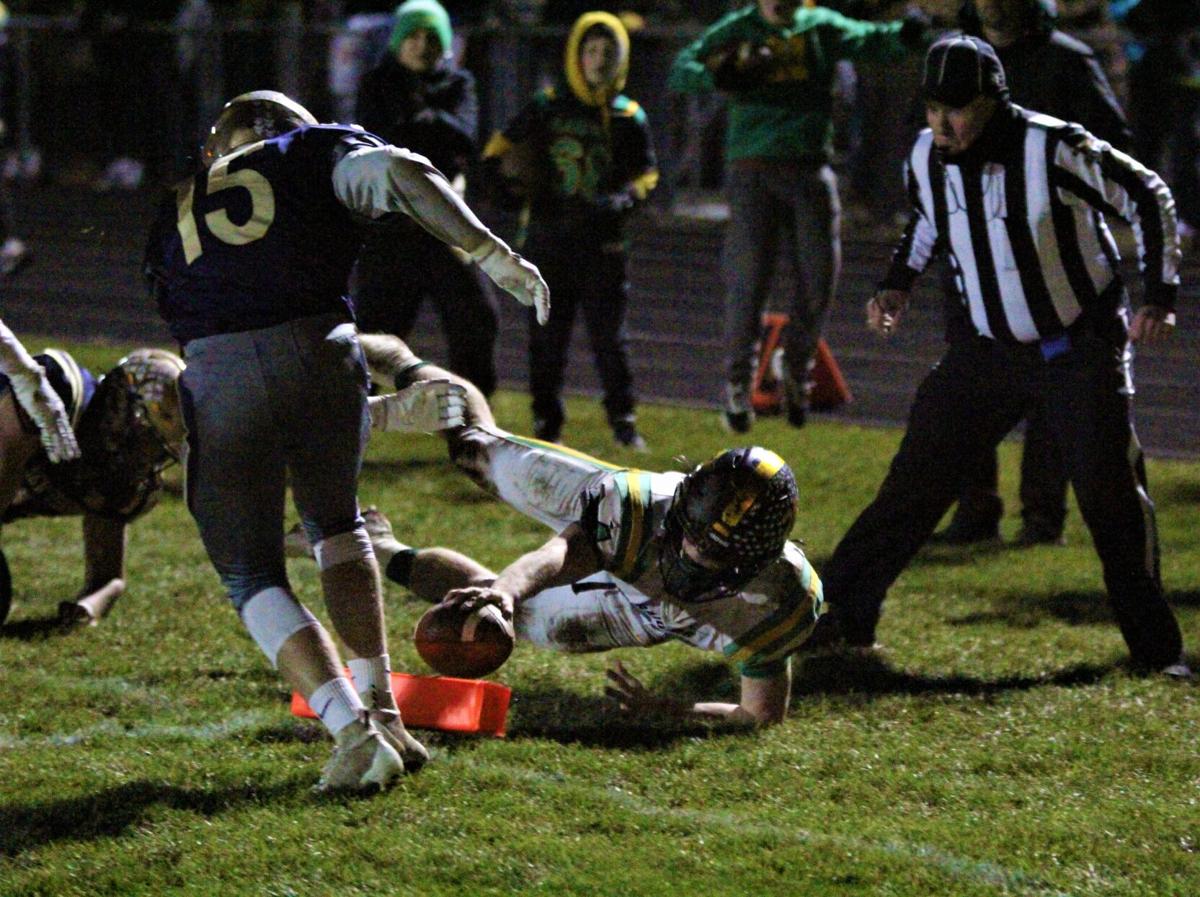 Northridge quarterback Tagg Gott dives for the end zone during the first half of Friday’s Class 4A Semistate championship against New Prairie at New Prairie High School in New Carlisle.

Northridge quarterback Tagg Gott dives for the end zone during the first half of Friday’s Class 4A Semistate championship against New Prairie at New Prairie High School in New Carlisle.

Well, it happened for Northridge Friday. They’re playing for a state championship now because of it.

It looked like New Prairie was about to run its way to a semistate title and subsequent state championship game appearance. Starting a drive with 5:46 to go in the game and at its own 48-yard line, Cougars junior running back Noah Mungia ripped off runs of 11, 11, 2 and 10 yards on four-straight plays to put the home team at the visitors’ 14-yard line. Nothing was going to stop New Prairie from, at a minimum, attempting a go-ahead field goal at some point. A touchdown, though, felt inevitable.

It started with junior Tagg Gott — who’s blossomed into a two-way star for the Raiders this postseason — slowing down Mungia finally, tackling him for a one-yard loss. On the next play, it seemed like Cougars quarterback Marshall Kmiecik was going to get the edge and break lose for a touchdown run — only for junior Tyrese Thomas to almost come out of nowhere and tackle Kmiecik for a one-yard loss.

Gott then made the biggest defensive play of the game on 3rd-and-12, as an errant Kmiecik pass landed right in the hands of the Northridge standout for an interception. The junior ran it back to the 25-yard line, allowing him to go back out there at quarterback and potentially lead the semistate-winning drive.

It wasn’t much of a drive that followed; rather, those big players once again making big plays in the big games.

Gott had a run for negative one yards. The clock ran to under two minutes remaining in the game. It almost felt like we were destined for overtime between these two teams.

And then, junior wideout Jethro Hochstetler made the play of the season for Northridge. Hochstetler got past the defense, and Gott threw him a perfect pass for a 76-yard touchdown with 1:31 remaining. Pandemonium ensued on the Northridge sideline.

“I saw the ball in the air, and I knew I had to get it,” Hochstetler said. “As soon as I caught it, I turned and ran and felt nobody near me. I just sprinted as fast as I possibly could. … After I caught it and took a couple of steps and realized the (defensive back) wasn’t on me, I knew I was gone.”

The ensuing extra point attempt was blocked, keeping the game firmly in the balance.

Northridge then decided to kick the balance in their favor — literally.

The “big time players” theme I believe can relate to coaching as well, and there may not have been a bigger play call all night from Northridge head coach Chad Eppley and his staff than on the kickoff following the Hochstetler score.

Instead of kicking the ball deep, Raiders senior Andrew Janatello kicked it about 32 yards to an area where the Cougars’ kickoff return team was vulnerable. Since the ball had traveled at least 10 yards, both teams could go recover the loose ball. Naturally, the Raiders recovered, as sophomore Landon Troyer was credited with the fumble recovery. Instead of New Prairie having a chance to march down the field for the win, they were forced to go back on defense to save their season.

“We noticed that there was a huge gap; I mean, they had everyone back and there was this huge gap there, so we decided to pooch it,” Eppley said. “I didn’t really expect that we were going to get the ball back, but we did, so it was good.”

New Prairie’s defense did its job, forcing the Raiders into a 4th-and-10 situation at the Cougars’ 32-yard line. Stuck in “no man’s land,” Northridge decided to go for it with 1:20 left.

Gott took a shotgun snap, scrambled a little and found Hochstetler on a crossing route for a first down. It was a gain of 17 yards, and more importantly, a Northridge semistate championship was secured.

“We knew we were going to go for it because we knew if we got a first down, we were going to win the ball game,” said Eppley of going for it on fourth down in that situation. “… I have all the confidence in the world in Tagg and our receivers. They make some catches where I don’t even know how they do it, and Tagg makes some throws where I don’t even know how he does it.”

The big time players made big time plays in a big time game for Northridge Friday night. There are countless more that happened throughout the contest that I could’ve highlighted, but the final three minutes of the game was a microcosm of what this team has done the last five weeks: stopping the run, making big plays, taking risks — and seeing it all pay off.

And because of that, a trip to Indianapolis is on their schedule for Saturday, Nov. 27 to play for a Class 4A state championship.