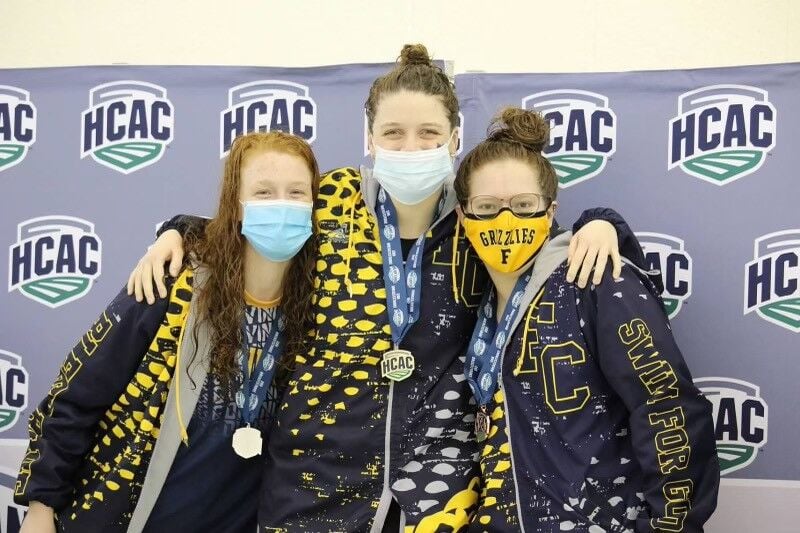 Franklin College senior August Hartzell, center, takes a picture with teammates Becky Pfeifer, left, and Maggie McGuire, right, after winning the 200-yard breaststroke race at the HCAC championships in March. Hartzell won six individual championships at the meet as the Grizzlies won the conference title for a fourth-straight season. 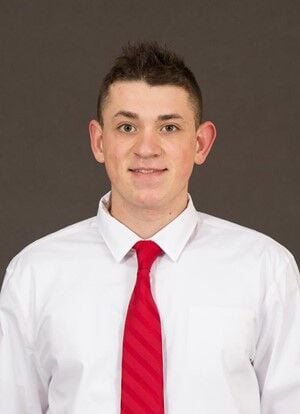 Franklin College senior August Hartzell, center, takes a picture with teammates Becky Pfeifer, left, and Maggie McGuire, right, after winning the 200-yard breaststroke race at the HCAC championships in March. Hartzell won six individual championships at the meet as the Grizzlies won the conference title for a fourth-straight season.

August Hartzell finished off a decorated swimming career at Franklin College this past March.

The Northridge graduate was part of a Grizzlies team that won its fourth-straight Heartland Collegiate Athletic Conference championship, finishing 470 points ahead of the next closest team. Hartzell won two individual championships on the meet’s final day, one in the 200-yard breaststroke (2:21.47) and the other as part of the 400-yard freestyle relay team (3:34.11).

Her total points scored for her team ranks 13th all-time in program history. Her 200-yard breaststroke time of 2:21.47 is a program record and was a good enough time for the NCAA National Time Standard. She was a 13-time all-conference honoree and an Academic All-Conference selection as well.

“I just went into (this season) with a mindset of enjoying every day, and that meant really taking in practice each day because I didn’t even know if I was going to be able to compete,” Hartzell said.

Hartzell said the biggest thing she learned from her time as a college athlete is time management and paying attention to the little details.

“Competing at the collegiate level, you’re already at a certain degree of — not like professionalism, but I’ve been doing this sport for 10 years going into college,” Hartzell said. “To still really improve, I had to focus on the small things and focus on them.”

“August continued to get better and better over her four years here, and while I wish the pandemic would not have derailed so much for athletes like August, I will always be proud of her perseverance and character,” added Franklin College coach Andrew Hendricks in an email.

Nebraska junior Sara Troyer finished 25th in one-meter diving and 27th in three-meter diving at the 2021 NCAA swimming and diving championships, which took place from March 17-20 in Greensboro, North Carolina.

The Northridge alum had a strong showing in the Big Ten Championships, finishing third place in one-meter diving and 10th in three-meter diving. Her 44 points scored helped lead the Huskers to a seventh-place finish at the meet, the best finish the program has had since joining the Big Ten.

At Purdue, senior Katie Hughes (Northridge) and junior Sydney Emerson (Northridge) earned Academic All-Big Ten honors as well. Hughes spent the season as a student assistant coach, while Emerson competed in a variety of events for the Boilermakers.

Sophomore Madison Schermerhorn (West Noble) and freshman Molly Brown (Northridge) are part of the Purdue volleyball team that earned the No. 7 overall seed in the upcoming NCAA Tournament, which begins April 14. The Boilermakers will play April 15 against the winner of the UCF-High Point contest from the day before in Omaha, Nebraska.

Purdue went 14-6 in their Big Ten-only schedule, which was moved from the fall to the winter due to the COVID-19 pandemic. Schermerhorn has seen consistent playing time, appearing in all 74 sets played by the Boilers. She recorded 100 digs and 14 assists during that time. Brown has played in three sets, recording no stats.

The NCAA Championships run from April 14-24 and all takes place in Omaha.

Meanwhile, at the NAIA level, freshmen Maddy Payne (NorthWood) and Caroline Mullet (NorthWood) are leading Bethel University to one of its best seasons in program history. The Pilots won the NCCAA Championship in November and have resumed play this spring ahead of the NAIA National Championship, which runs April 27-May 1 in Sioux City, Iowa.

Mullet has played in 108 sets, while Payne is at 107. Mullet is second on the team assists with 516, while Payne leads the team with 305 kills. Bethel is currently 23-6 on the season. The NAIA final was delayed to the spring due to the pandemic.

After spending the first half of the 2020-21 season at SPIRE Academy in Ohio, freshman Charlie Yoder (Westview) finished out the year at Incarnate Word, a Division-I school in San Antonio, Texas. Yoder made his first appearance on Jan. 16 against Stephen F. Austin and made his first collegiate shot attempt — a ‘3’ from the corner — on Jan. 23 against Texas A&M-Corpus Christi.

Yoder ended up appearing in six games for the Cardinals, starting one on March 1 against New Orleans. In that start, he finished with 12 points on 5-of-8 shooting to go along with four rebounds.

Despite the Regents only playing 14 games this season due to the pandemic, Emerick became the 25th player in program history to eclipse 1,000 career points this season. In 2020-21, he averaged 12.3 points, 4.2 assists and 2.1 steals per game.

Ashya Klopfenstein (Westview) was named to the First Team of the Mon-Dak Conference Wednesday. In her sophomore season with Dawson Community College (MT), Klopfenstein averaged 17 points, 11 rebounds and three steals a game. She had 15 double-doubles in 22 contests this season as the Buccaneers went 19-5 overall and 17-4 in conference play.

Sophomore Morgan Litwiller (Northridge) started in all but three games for Eastern Illinois in the 2020-21 season. She finished averaging 7.7 points and 3.8 rebounds per contest. The Panthers went 11-15 overall and 9-11 in the Ohio Valley Conference.

AVON PARK [mdash] Shirley A. Myers, age 90, of Sebring, Florida, passed away Monday, April 12, 2021. She was born February 1, 1931 in Gary, to Bowie and Cassell (Clark) Hassell. She was a Special Ed Teacher, member of the St. John's United Methodist Church, and has been a winter resident of …