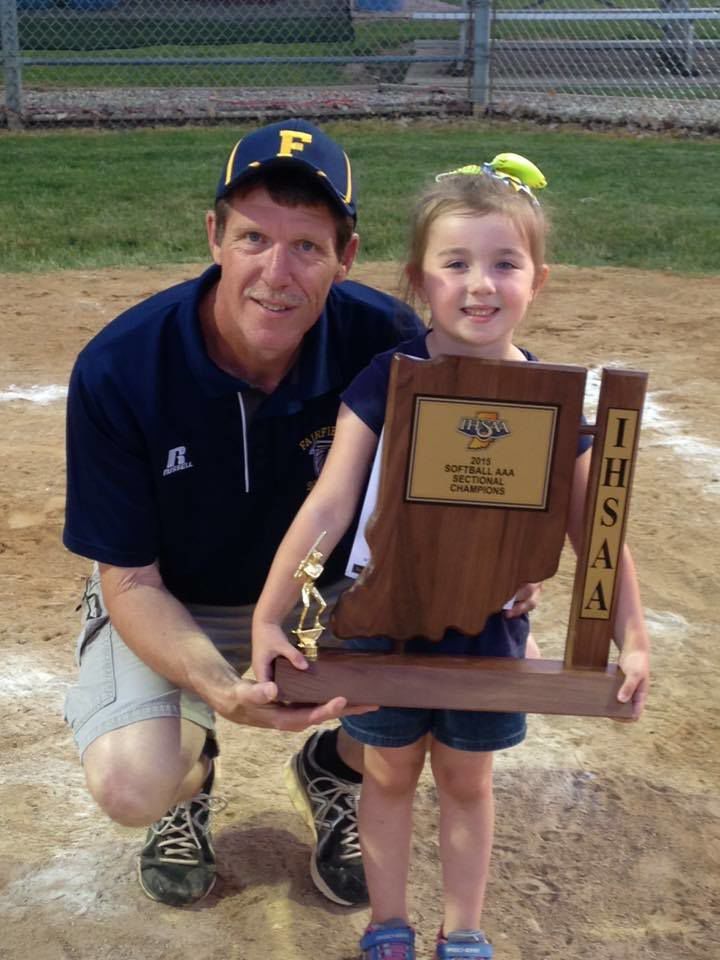 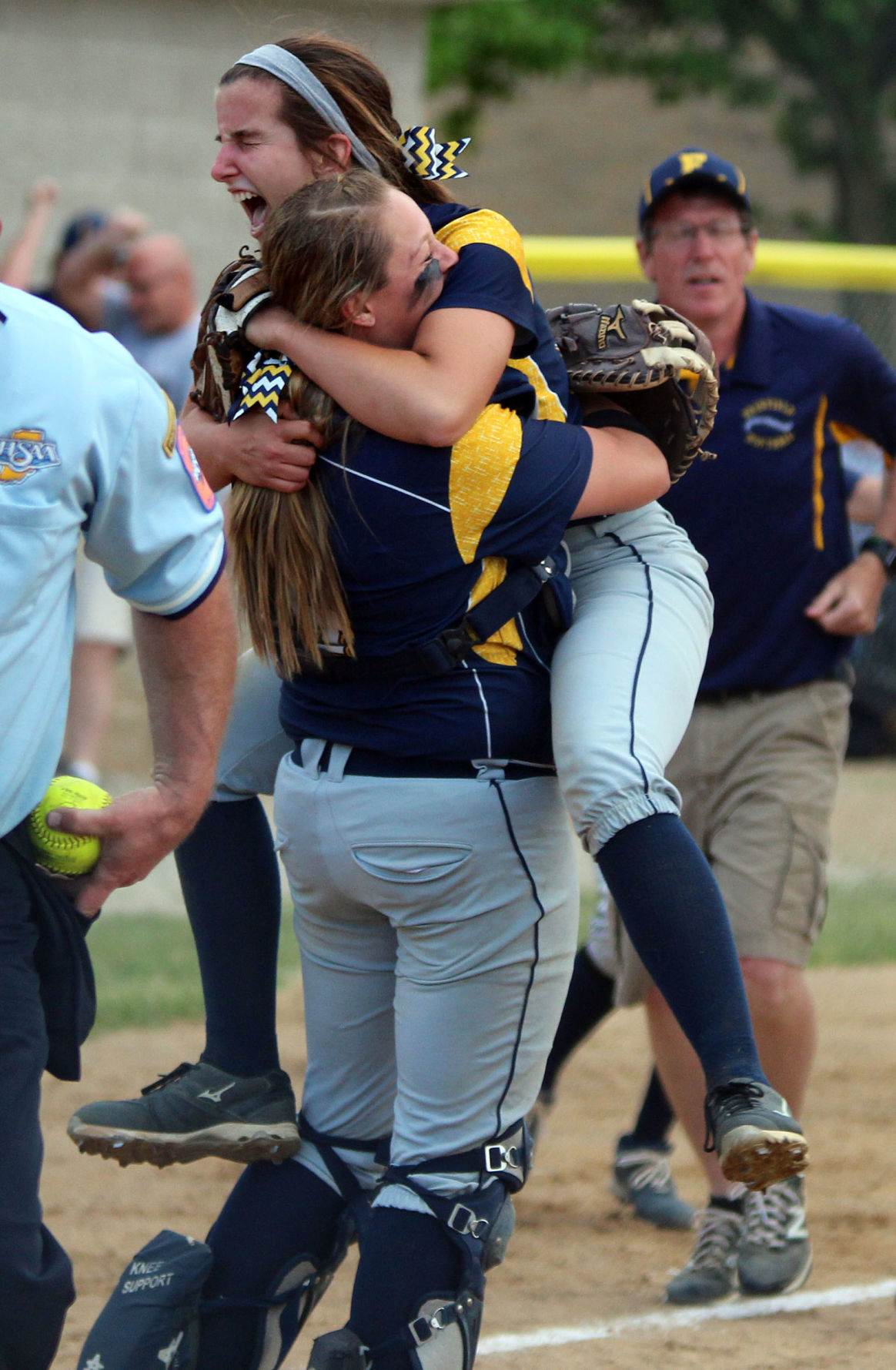 John Skibbe, in the background on the right, watches senior pitcher Lairen Miller, right, leap into the arms of senior catcher D.J. Martz, left, after Fairfield defeated Fort Wayne Bishop Dwenger, 3-2, for a 3A softball regional championship in this 2016 file photo.

John Skibbe, in the background on the right, watches senior pitcher Lairen Miller, right, leap into the arms of senior catcher D.J. Martz, left, after Fairfield defeated Fort Wayne Bishop Dwenger, 3-2, for a 3A softball regional championship in this 2016 file photo.

GOSHEN — John Skibbe wasn’t thinking about a long-term commitment when he took over as head coach for the Fairfield High School girls softball program.

Now, some 27 years later and with 385 wins under his belt, the veteran coach is still going strong.

“I came in as an assistant coach in 1992 for Rachel Stiver before taking over the top spot beginning in 1993,” Skibbe said. “I had no clue at first, I was just trying to figure out what was going on.”

“My three oldest children played in those programs,” he said. “I also helped Stiver coach a women’s slow-pitch softball team. That is how I got my exposure to women’s softball.”

Skibbe shared how fortunate he was his first two seasons coaching the Falcons to have Darrell Bender on his staff. The left-handed pitcher was one of the top men’s fast-pitch hurlers in the nation. He led Gonderman Coin to Indiana state championships in 1980 and 1981.

“I had one of the best men’s fast-pitch softball pitchers in the nation working with me,” Skibbe said. “Darrell was a great blessing to me and I learned a lot from him.

“My philosophy has always been pitching and defense are important in softball, and Darrell just made me realize it that much more.”

Skibbe has earned the respect of his peers.

“I have the utmost respect for John and what he has done at Fairfield,” Goshen softball coach Brent Kulp said. “He teaches his players the right things. His players have all the fundamentals down.

Kulp was the Jimtown softball coach before coming to Goshen, and the respect between the coaches and the two programs goes back to those days.

“Fairfield had a player named Amanda Cross who was a slap hitter and very hard to keep off base,” Kulp said. “She was injured in our game with them. Our players had so much respect for her that we sent her a card and a couple of players even went to visit her. We won our sectional and when we played in the regional at Prairie Heights, Cross and Fairfield assistant coach Lee Kauffman came to the game. We won the regional and our players were so impressed that she showed up that we included her in the team photo. So in our Jimtown regional championship photo we had a Fairfield player in the picture.”

‘I never really played softball, but have learned a lot of from softball players,” he said “Dewayne Yoder, who is my boss at Smoker Craft, has taught me a lot about the game. Mike Biller has also a big help.”

“One thing about girls is they want to make sure they are doing everything the right way,” he said. “They want to do things the way the coach wants them done. Girls are very teachable. You also get a lot more positive feedback from them.”

Skibbe remembers something about every season he has coached.

“My goal every year is to make each girl a better player and a better person,” he said. “But if I had to point to one season that was special it would be 2013.”

It was that magical season when the Falcons edged the Lakeland Lakers, 5-4, to win the program’s first-ever sectional title as Falcon pitcher Danica Mast outdueled Laker hurler Ashlyn Grubb. The team also added a regional championship in a 5-1 victory over Fort Wayne Dwenger. DJ Martz slugged a pair of solo home runs and Mast tossed a three-hitter.

“Grubb was a super pitcher and then we won at Dwenger,” Skibbe said.

Fairfield finished the season with a 22-8 record after dropping a 10-0 decision to Yorktown in the semistate at Twin Lakes.

The veteran considers being level headed as one of his best qualities to be a coach.

“I am never too excited or too down,” he said. “I love pitching and defense. I love playing small ball.”

Skibbe has made somewhat of a change in his philosophy as the game has evolved.

“About 10 years ago, I designated one of my assistants to work solely with the hitters,” he said. “That has helped our hitting. One of the biggest changes in the game is the way the ball comes off the bat.”

“Jason and Aaron are both coaching,” John said.

One of Skibbe’s proudest moments as a coach came when he was coaching his daughter Michelle.

“With her pitching in the sectional we beat Prairie Heights 1-0, Jimtown 1-0 and then lost to Garrett 1-0 in the championship. In three games, she only allowed one run. That was pretty special,” Skibbe said.