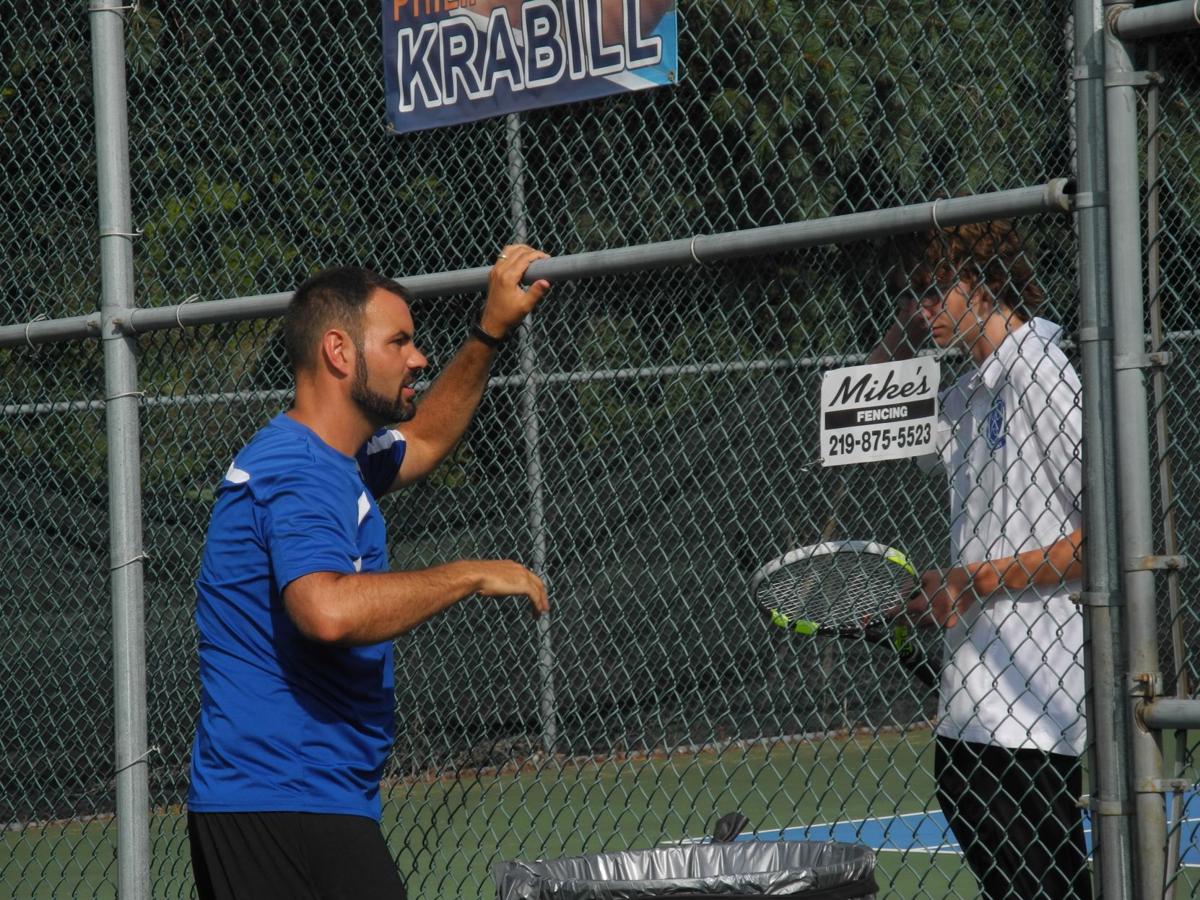 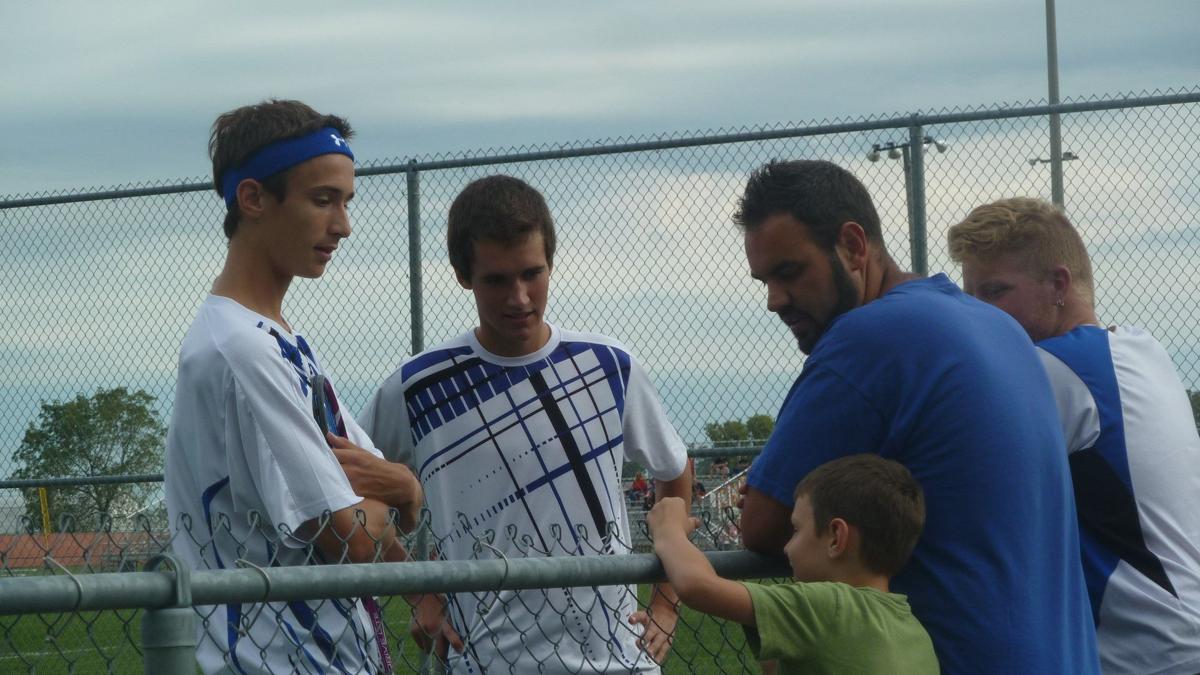 Matt Miller, on the right in the blue shirt, with his son Gideon and assistant Bethany Christian High School boys tennis coach Seth Krabill, talk about a doubles match with players Simon Hurst and Hans Miller. Matt Miller has been the head coach for the Bethany boys for the past 16 seasons.

Matt Miller, on the right in the blue shirt, with his son Gideon and assistant Bethany Christian High School boys tennis coach Seth Krabill, talk about a doubles match with players Simon Hurst and Hans Miller. Matt Miller has been the head coach for the Bethany boys for the past 16 seasons.

GOSHEN — When Matt Miller walked across the parking lot at Bethany Christian High School for his interview for the position of boys tennis coach, he was greeted as “Coach” by then-Athletic Director Dan Bodiker.

Miller replied, “Thank you, but I don’t have the job yet.” Bodiker informed him he had just talked to Matt’s uncle and he had the job.

Miller’s uncle, Mike Gingerich, had played soccer for Bodiker at the school.

“I was only planning on staying for a year,” Miller said. “I was student teaching at Goshen High School and when I was done, my wife (Courtney) and I were planning on moving to a bigger city like Indianapolis or Chicago. I told Dan about our plans and of my intention to only stay for a year.”

That one year has turned into a stretch of 16 seasons for the 1999 Angola High School graduate.

“The first season was awesome. The parents, the community and Bodiker were so welcoming,” Miller said. “I really loved the Bethany coaching experience. My wife and I loved the Goshen community and we started wondering, ‘do we really want to live in a big city?’

“When the school called and told me there was an opening for a long-term sub to teach one class per day, I took it.”

Miller started at Bethany as a math teacher before moving into social studies. He has also taught Bible at Bethany since the start.

During his career, the Bruins have won two sectional championships. Bethany defeated NorthWood, 4-1, in the 2008 finale at Goshen and the host RedHawks, 3-2, in the 2014 championship.

“I appreciate Matt so much,” Bethany Athletic Director Gary Chupp said. “He runs a program that is very low maintenance. I never get complaints from players or parents about his program because he does things the right way.”

The Bethany girls coaching position has been open several times and Chupp has tried to get Miller to take it.

“He has four young children and can’t take the time to coach another program,” the AD said.

Miller has always wanted to be a coach, but thought it would be in basketball, not tennis.

“Being here in Indiana, my first love is basketball. Even to this day that is the sport I watch before any other,” he said.

Miller played four years of tennis at Angola and four of basketball, but was only on the varsity his senior season in basketball.

“I was a benchwarmer in basketball,” he said. “My nickname was 32 seconds because that is how much time I averaged per game as a senior. I had a really good player ahead of me.”

Miller went on to play tennis a Goshen College, spending his four seasons at No. 5 singles and No. 4 doubles.

“While at Goshen College I practiced against the women’s basketball team,” he said. “Krysten Parson, who coaches at Bethany, was on the team.”

One of the highlights of the season for the coach and the players are their team camps.

“One of the unique things that we do to create the family atmosphere is that we spend a whole week of the summer together,” Miller said. “We go to my hometown, Angola, and stay at the church I grew up in. There are 20-25 guys living in one large youth room for the week, camping on mattresses and old couches.

“We play tennis for four to six hours a day, swim at my parent’s house and each night we have ‘Team Time.’ During this time, we read Bible passages and then partner up with each other and answer some questions. This really allows us to get to know each other in new ways.

“Plus the camp is super fun for the guys, and me, as we make our own breakfasts, eat way too much fast food, and we all take turns waiting for the one shower in the church. We play cards, quiz games, video games and end up talking about some really deep topics. The guys say that summer camp is probably their favorite thing about the whole season, more than the matches or anything. We’ve been doing a summer camp for 16 straight summers.”

Miller cares about his players on and off the court.

“I would like to think my players will remember me as someone who cared about them as people and not just players,” he said. “I try to watch outside things that might affect their play. They know I am someone they can talk to and they might have one less thing to worry about.

“We have done some goofy things in the past as a way to get to know the players outside of tennis. My goal is to try and create a place where they feel at home. I want them to know they can go out and play a year of tennis and, win or lose, know they will be accepted as a person.”

Chupp added, “To me, one of the signs of a good program is the involvement of players after they graduate. How much do they comeback to follow the team or to even help with the team? Guys that have played for Matt still feel like they are part of the program after graduation.

“He builds the type of relationships where the players are willing to do anything for him. He has the advantage of teaching in our middle school. He can start building those relationships for when the kids get to high school.”

The Millers have four boys: Gideon, Judah, Hosea and Abel.

“Can you tell I teach the Bible?” Miller quipped.