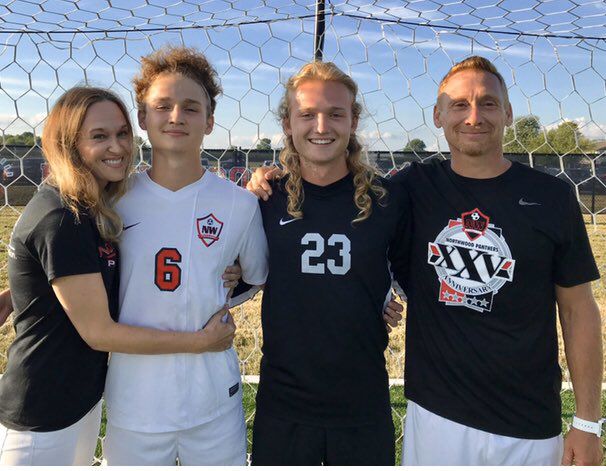 Brad Duerksen, right, has coached the NorthWood High School boys soccer team for the past 23 seasons. The veteran coach is shown with his wife Maegen, youngest son Chase (6) and oldest son Skyler (23). 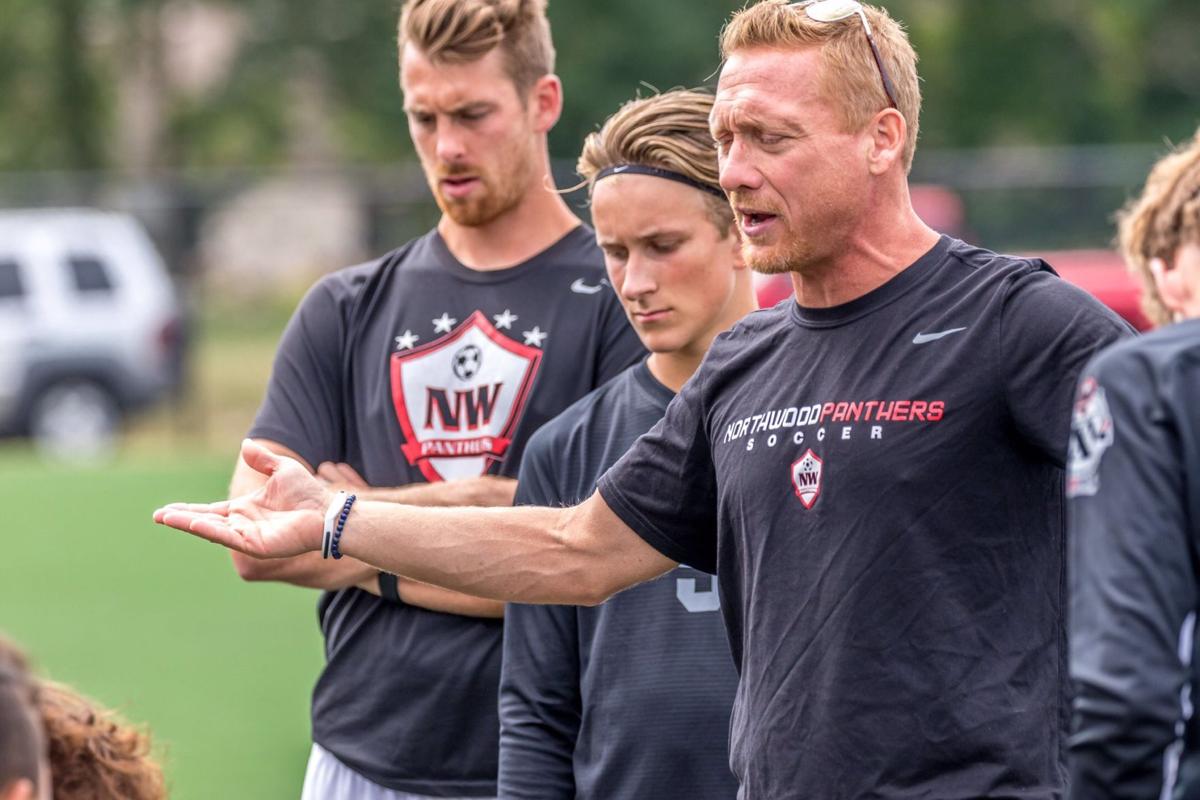 Brad Duerksen, NorthWood High School boys soccer coach is shown making a point to his team. Duerksen has coached the program to a 179-171-3 record over the past 23 seasons.

Brad Duerksen, right, has coached the NorthWood High School boys soccer team for the past 23 seasons. The veteran coach is shown with his wife Maegen, youngest son Chase (6) and oldest son Skyler (23).

Brad Duerksen, NorthWood High School boys soccer coach is shown making a point to his team. Duerksen has coached the program to a 179-171-3 record over the past 23 seasons.

NAPPANEE — You might say Brad Duerksen knew soccer was cool before the rest of Indiana and the country in general did.

“I went to a Baptist school before going to Mishawaka and there was an after school soccer program,” Duerksen said. “I was about nine or 10 years old and went out one day. I have been in love with the sport ever since. Soccer felt normal to me and I’m glad for the early exposure to the sport.”

Duerksen has been able to turn that love into a long-term career, with last fall being his 23rd season at the helm of the NorthWood High School boys soccer program.

“I never expected to be a high school coach this long. My plan originally was to coach at that level for a few years and then move on to the college game,” he said. “NorthWood has been a great place for me and my family.”

Duerksen would have to be considered the “Father of NorthWood Soccer” building the program from the ground floor up.

“There was one coach before me,” Duerksen said. “ I was coaching a 13-year-old team at the time and that first year they probably could have beaten our varsity.”

Duerksen has been a guiding light not only for his players, but he became an advisor to Norm Sellers when he started at the school as the Athletic Director.

“I had no experience as an AD and Brad has been a big help,” Sellers said. “I have used Brad’s expertise to help me in a lot of areas. For him, my coming in as the AD was not to change things but to support him.”

Duerksen has built a successful soccer program at a school with quite a football reputation. The Black Crunch football team has won a total of 18 sectional, 11 regional, six semistate championships and the Class 3A state title in 2005.

“One of the amazing things about Brad is how he built his program at a school that is known for its football program,” Sellers said. “That is a great compliment to Brad. He has never complained about the fact he is coaching a sport that is not a Friday night sport.”

Duerksen has not done it alone. Assistant coach Egbert Dijkstra has been by his side every step of the way, and the pair have not only built up the Panther program, but have developed a bond between the two.

“Egbert, who is from The Netherlands, has been with me the whole 23 years and has become my best friend,” Duerksen said.

Duerksen played four years of soccer at Mishawaka and four years at Bethel College in Mishawaka. An association at Bethel with then-WaNee Superintendent Joe Sabo is how Duerksen found out about the NorthWood soccer job.

“I knew coaching was in my future. While I was at Bethel, I was coaching the JV boys soccer team at Mishawaka Marian (High School) and also for the Elkhart Flames,” Duerksen said. “Soccer is what got me into teaching.”

Duerksen has been an English teacher at the school since his hiring.

The veteran coach shared how he had an opportunity to leave NorthWood when his wife Maegen was pregnant with the couple’s first son Skyler.

“NorthWood has been a great place to teach.”

Sellers shared he was worried about Duerksen leaving, but that is not unusual.

“I worry about all of my coaches taking another job and leaving,” he said. “At the same time I encourage them never to limit themselves. All I can do is provide an opportunity at a place where they don’t want to leave.”

Skyler Duerksen was a senior on the NorthWood soccer team last fall and the couple’s other son, Chase, was a freshman.

“This year was the only time they have been on the same team,” Duerksen said.

Duerksen is missing his players during the COVIS-19 pandemic.

“I really miss the players,” he said. “We are doing what we can by having a Zoom meeting every Thursday with the players.”

Duerksen also coached the boys golf team at NorthWood for 10 years before retiring from that sport in 2015. NorthWood won the 2013 sectional championship with a team score of 299 at Black Squirrel Golf Club in Goshen. Peyton Grubbs carded a 73, Dylan Gessinger 74 and Logan Kauffman 75 for the Panthers.