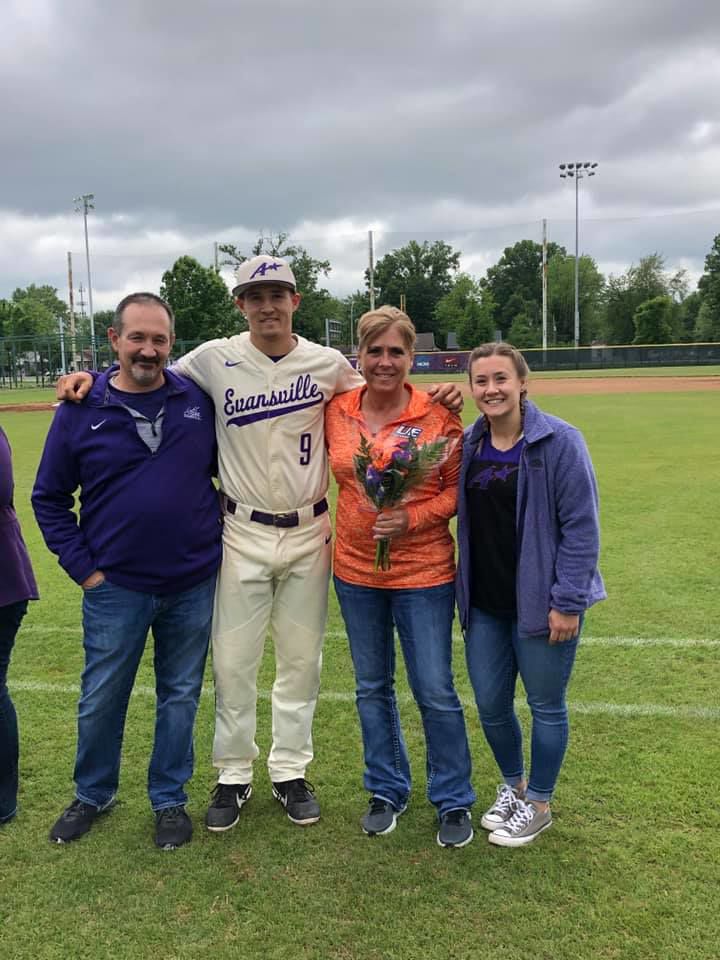 Sam Troyer, second from left, has signed to play for the Birmingham Bloomfield Beavers of the independent United Shore Professional Baseball League, based in Utica, Michigan. Pictured from left, are his father Steve Troyer, Sam Troyer, his mother Shanna Troyer and sister Sara Troyer on Senior Day at the University of Evansville. 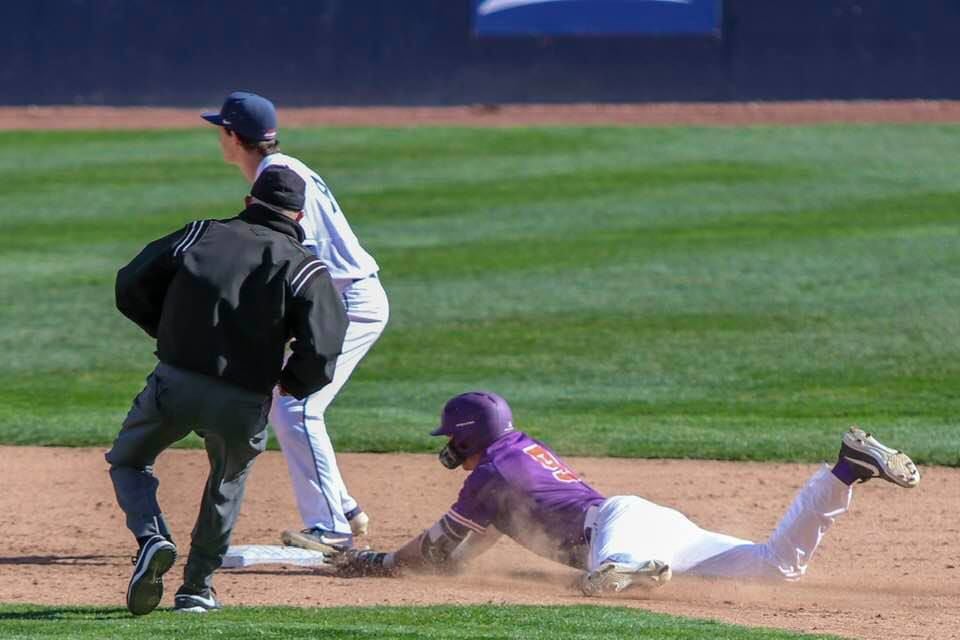 Sam Troyer slides into a base while playing for the Univeristy of Evansville Purple Aces. 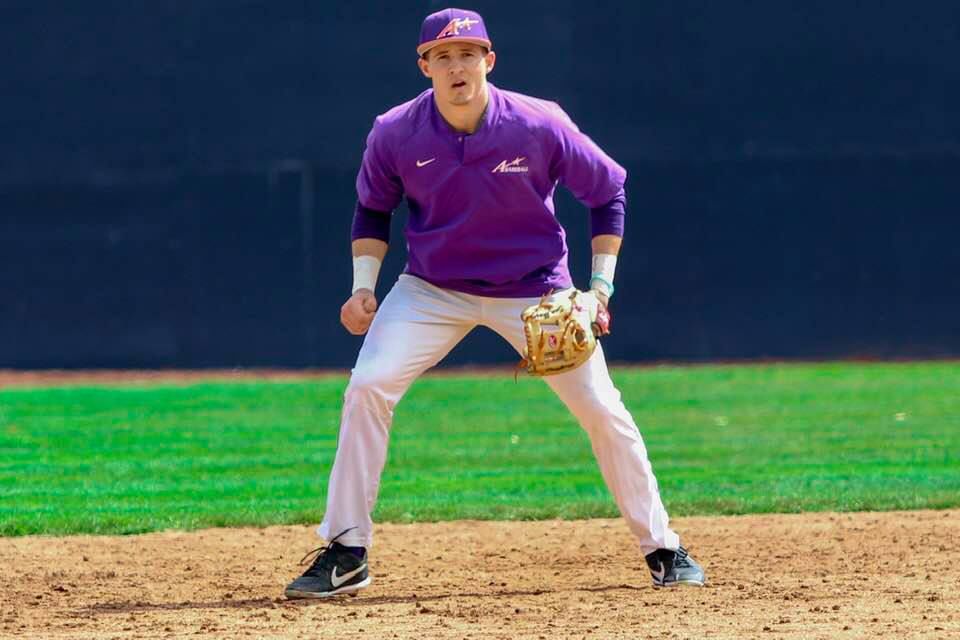 Sam Troyer, second from left, has signed to play for the Birmingham Bloomfield Beavers of the independent United Shore Professional Baseball League, based in Utica, Michigan. Pictured from left, are his father Steve Troyer, Sam Troyer, his mother Shanna Troyer and sister Sara Troyer on Senior Day at the University of Evansville.

Sam Troyer slides into a base while playing for the Univeristy of Evansville Purple Aces.

MIDDLEBURY — Sam Troyer is living the dream of many a young boy: having the opportunity to play professional baseball.

However, his dream has been put of hold for the time being due to the coronavirus pandemic.

The 2015 Northridge High School and 2019 University of Evansville graduate has signed to play for the Birmingham Bloomfield Beavers of the independent United Shore Professional Baseball League, based in Utica, Michigan.

“I’m super excited about it,” Troyer said of the opportunity. “I was in Palm Spring in January and February playing in the California Winter League. My roommate’s coach asked me if I wanted to come and play in the league. It was a pretty quick process.”

The USPBL was founded in May 2016, by Andy Appleby, a former senior vice president of the Detroit Pistons and Palace Sports and Entertainment.

The league has four teams based in Metro Detroit, with all games being played at Jimmy John’s Field in Utica.

The league is aimed at 18–25-year-olds. It is meant to give players recently graduated from college or with limited minor league experience a chance to stay in baseball shape, and give them an opportunity to sign contracts with MLB affiliated minor league teams.

“This league is different than most, since the main goal is to develop players rather than winning,” Troyer shared.

Sam’s father, Steve Troyer, likes the opportunity his son has.

“This is a great opportunity for Sam,” Steve said. “He is one step closer to his ultimate dream of being signed by a Major League team.

“I didn’t know much about the league until doing some research. Teams practice Monday through Thursday under the directions of coaches that know what they are doing. The idea is to develop a plan for each player, showing them what they need to do to get drafted.

“Sam has played enough games. Working with coaches under close supervision is, in my opinion, what Sam needs at this point.”

Sam is currently home in Middlebury waiting for the USPBL to let him know when to report. The league, like all professional sports, has put its season on hold due to COVID-19 pandemic. The season runs from May until September.

“I was supposed to report for spring training on April 25th, but that isn’t going to happen,” Sam said. “I have not even signed my official contract yet.”

Sam is the brother of Sara Troyer, the University of Nebraska diver, who saw her season end early due to the pandemic. The outbreak caused her to miss out on the NCAA National Championships.

“Sara and I have been there for each other,’ Sam said. “She is pretty tough and I think, if she would have had the chance, she could have been an NCAA champion.”

During his senior year at Evansville, Sam played in all 53 games for the Purple Aces, batting .249 with two home runs, 11 doubles, 25 runs driven in and 27 runs scored. He stole 21 bases in 25 attempts. The third baseman-shortstop handled 148 chances with 41 putouts, 92 assists, 13 errors and a .971 fielding percentage.

“I need to improve my power. My defense is not a problem. Hitting is what gets you the money,” Sam said.

Troyer was a four-year letterwinner at Northridge. As a senior, he batted .429 with seven home runs and 35 stolen bases. He helped the Raiders win the Class 4A sectional title at Elkhart Memorial.

Troyer is working with a hitting coach, Keven Graham, out of St. Louis.

“I fell into some bad habits in college and didn’t have the swing to get drafted,” Troyer said. “Since working with my hitting coach, my swing feels different. I only played 14 games in the California League, but could tell a difference. I felt the power. My swing is not where it needs to be, but we are making progress.”

The pandemic has forced Troyer to come up with some different ways to train.

“I can’t really get to a gym to workout, but we have enough equipment at home to take care of that part,” he said.

Troyer is working out with his friend, Jimtown High School and Ball State University graduate Nick Floyd, who is waiting to play for the Gary Southshore Railcats of the American Association of Independent Professional Baseball.

Floyd is a pitcher, so he throws batting practice to Troyer.

“The family of one of the players on the Northridge team has a huge barn where we can go and I can do all my hitting,” Troyer said.