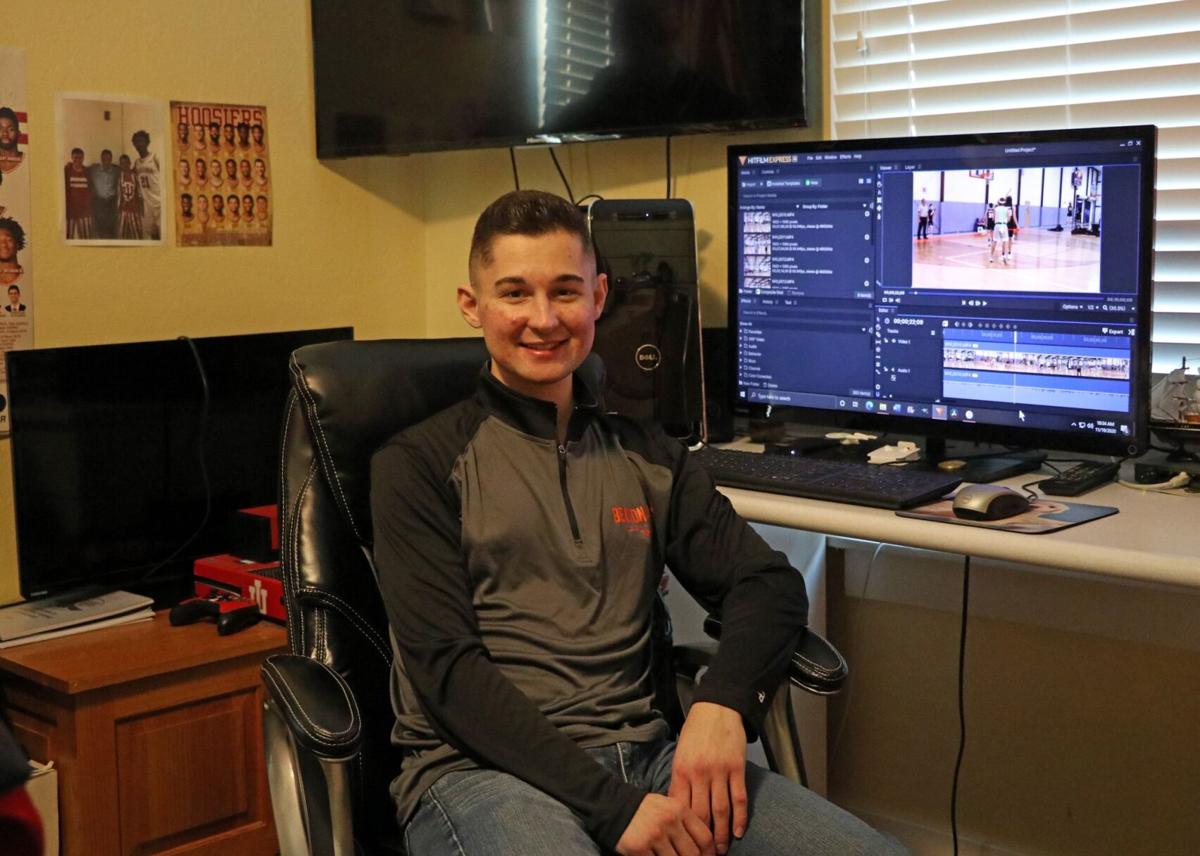 Leighton Akins has lived through a lot in his first 20 years. He had a heart transplant at age 5 and is on the list to get another one in the future. Despite this, Akins has become a positive force everywhere he goes, including making highlight tapes for the Benton Bucks home-school basketball team. 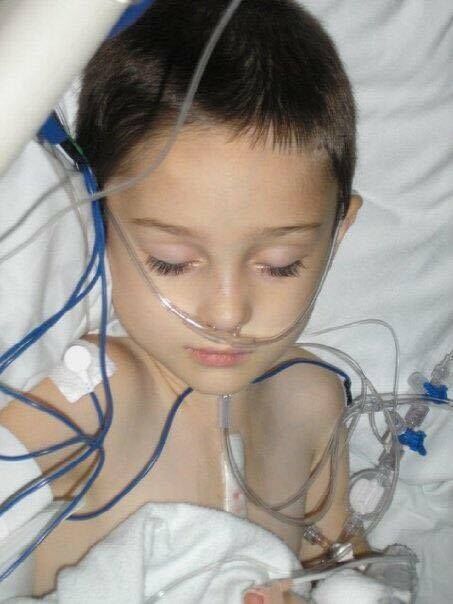 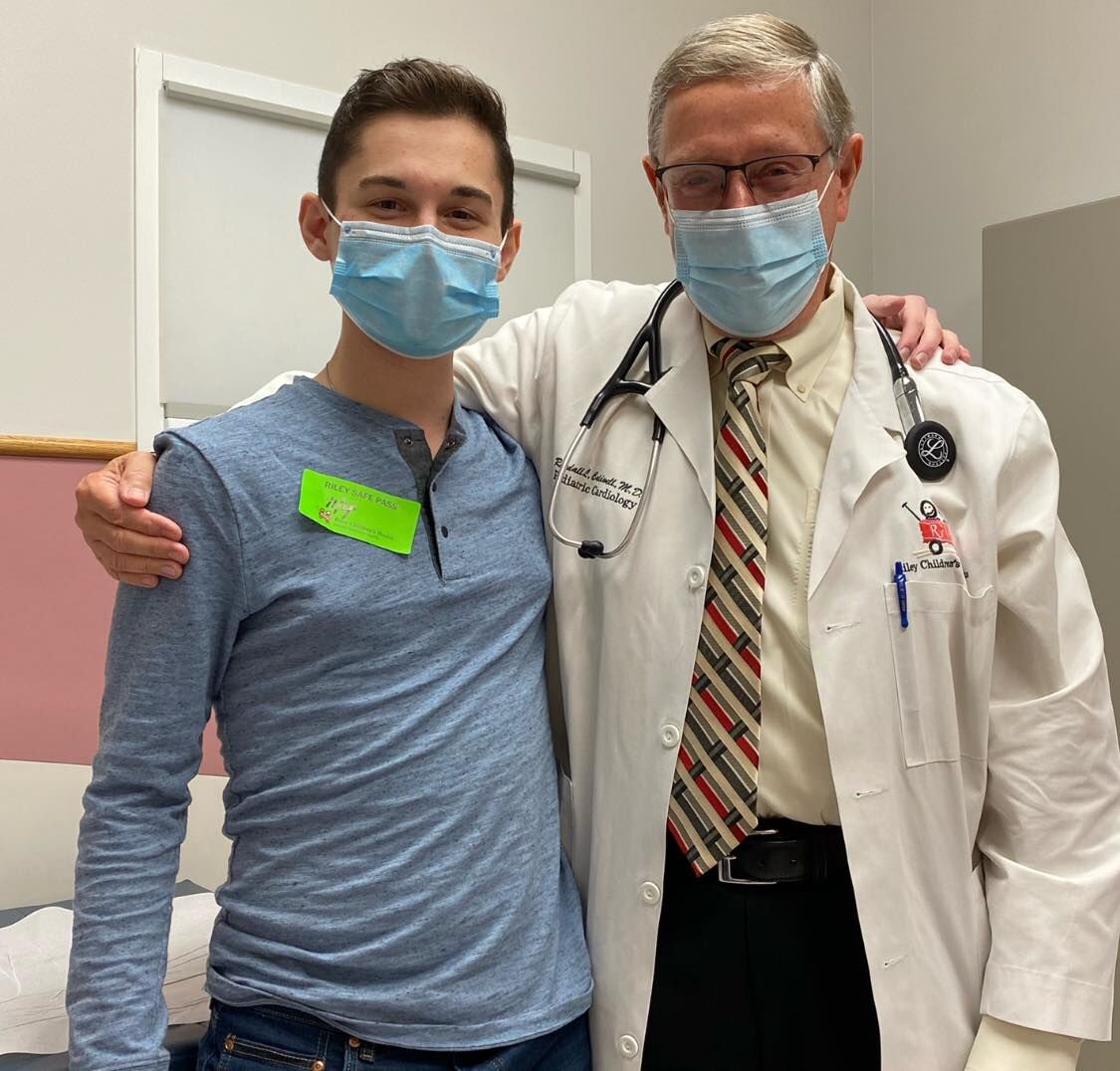 Leighton Akins, left, has had the same doctor, Dr. Randall Caldwell, since he underwent his heart transplant more than 15 years ago. Caldwell is retiring after this year, meaning the check-up Akins had in early November will be the last time he has Caldwell as his primary doctor. 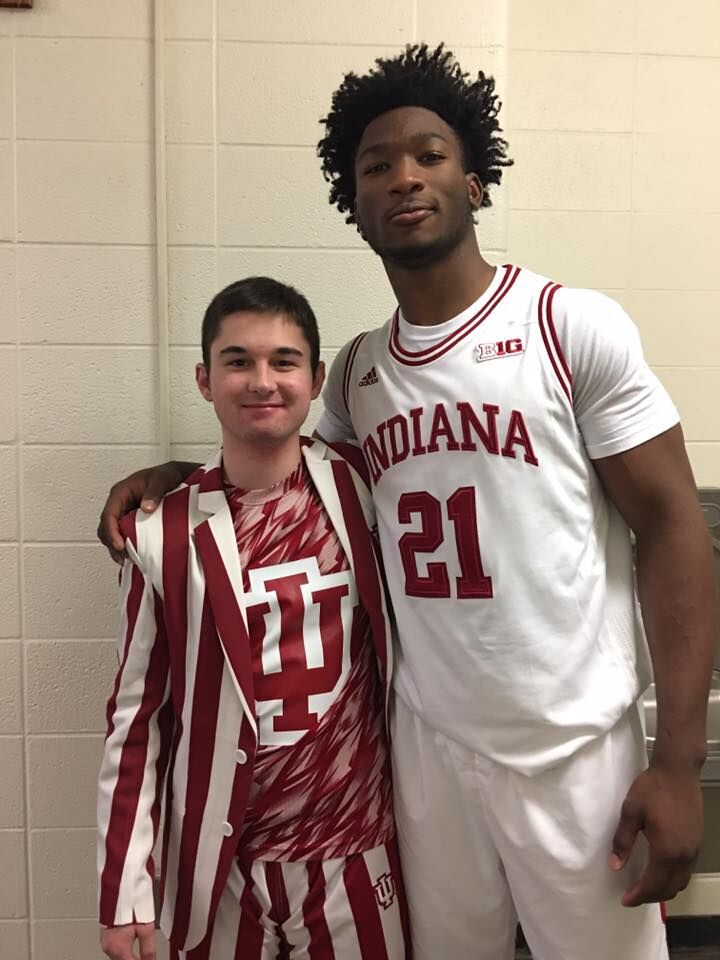 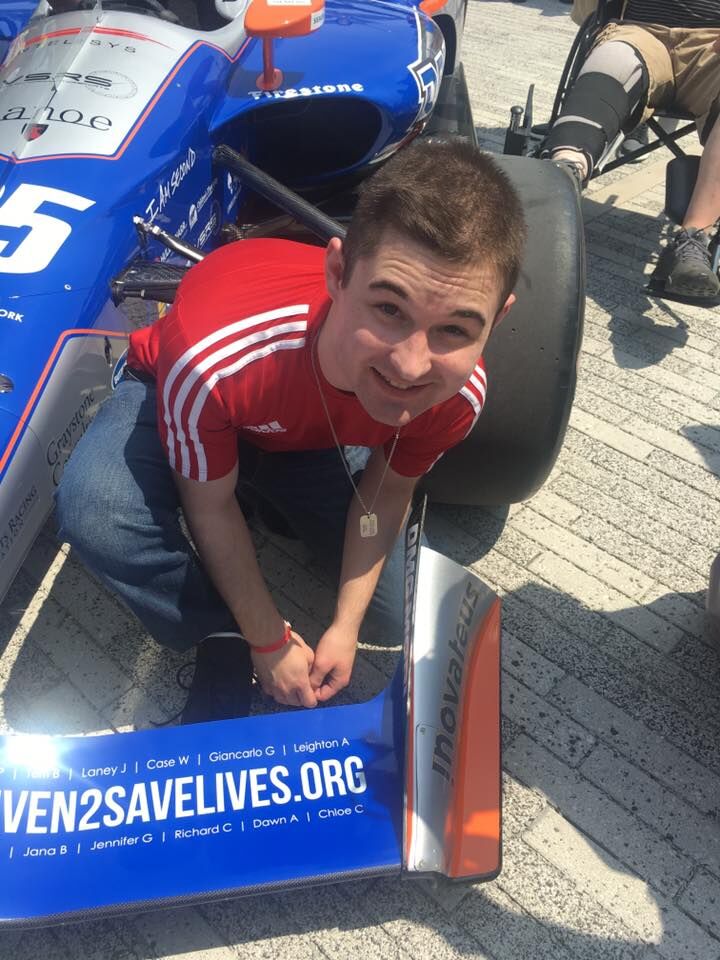 Leighton Akins shows off where his name was on an IndyCar ahead of the 2018 Indy 500.

It’s what’s come to define who Leighton Akins is.

Unsure if he would make it past the age of 5, the now-20-year-old has a degree in business administration from Liberty University. He’s had his name on a car during the Indy 500. He’s been able to meet some of his heroes in the Indiana men’s basketball program.

Akins probably wasn’t supposed to do all of those things. But his heart wouldn’t give up.

“I feel great,” Akins said. “I am not where I used to be, but it’s hard to tell the difference from years past. I’ve been blessed.”

It’s a disease the Akins family is all too familiar with.

Restrictive cardiomyopathy is a condition where chambers of the heart stiffen over time. This leads to blood backing up in the circulatory system, leading to potential blood buildup in the lungs.

It’s not a genetic disease, but Leo and Lisa Akins have now seen three of their kids battle the disease. The first two did not make it to see their ninth birthdays.

Leo and Lisa’s first son, Leo Jr., died at 7 years old. Their second son, Lyndon, was 8 when he died from the disease. Leo Jr. was sick for years and was in need of both a lung and heart transplant. Lyndon died suddenly, both parents not even realizing their child was sick until it was too late.

So when Leighton was diagnosed with the disease at 5 years old, they feared the worst.

“If you ever have an experience where you were not in control of anything … you have to really find out what you’re grounded in, whether it’s your faith or family or all of the above and latch on,” Leo said. “Because if not, that can really throw you into a bad downspin.”

Fortunately, Leighton was healthy enough to where he was put on a heart transplant waiting list. Less than six months later — on Oct. 17, 2005 — the Akins family received a call that a heart was ready for Leighton. A family friend flew them from the Goshen airport to Riley Hospital for Children in Indianapolis for the procedure.

“We were cutting an ice cream cake for (Lisa’s) birthday, and I actually took the whole ice cream cake, put it in the sink and then we left,” Leo said.

Although he was young, Leighton remembers most of what happened that day.

Surgery was successful. Leighton had a new, healthy heart. He was never going to be fully healthy, but the risk of dying from restrictive cardiomyopathy was no more.

“He’s been huge,” said Leighton of Caldwell. “He’s really, truly cared about me and all of his other patients. He’s been very calming for me during all the biopsies and surgeries when I’d be very nervous for the news of each appointment. He does a great job of letting you know what the best route is to go and that you’re being taken care of the best way he knows how to. It’s really just a calming presence.”

Caldwell is retiring at the end of the year, meaning Leighton will have a new doctor in 2021. Murphy is still there, though, and is still inspired by Leighton’s courage and determination.

“I think that his inner strength, his upbringing — the strong, Christian values they share as a family — have contributed to him having the ability to be on this journey,” Murphy said.

There have been numerous hurdles for Leighton to overcome. His heart is denervated from his lungs, making it harder for his heart to both start and stop pumping at a fast rate. This has limited him from being able to play sports at a high level, especially the one sport he loves the most: basketball.

“It’s tough,” Leighton admitted. “I tried to play in some summer leagues, but I’m glad I didn’t. I was disappointed at the time, but looking back, I don’t know if I would’ve been able to compete and I don’t know how that would’ve affected me.”

Leighton also has to be precautionary in the winter time. Since he has a compromised immune system, he tries to stay inside as much as possible during flu season. While he’s been sick before and survived, there’s a chance getting something like the flu could lead to serious complications.

It’s very similar to the many precautions people are taking during the current COVID-19 pandemic.

Things had been going relatively well for Leighton until October 2016, when he suffered a minor setback.

Doctors discovered Leighton had transplant coronary artery disease. The connection of the arteries to his new heart are restricting, and he will likely need a new heart — again. He was placed on the heart transplant watch list again, and still remains there.

Luckily for Leighton, the disease hasn’t progressed much in the four years since the initial diagnosis. He’s listed on the lower end of those needing a heart transplant because of the lack of spread of the disease the past four years.

The Akinses are a very religious family, and Leighton truly believes God has played a role in the success of his health.

“I’ve had miracles happen to me before where the medicine wasn’t working for the whole trial, and then at the very last second, it suddenly started working,” Leighton said. “I firmly believe that’s God … I’m just really excited for what God has for me and it gives me tons of hope.”

Leighton’s journey has led him to some of the most iconic sports venues in Indiana.

A huge Indiana Hoosiers men’s basketball fan, Leighton received the surprise of a lifetime in December 2016. Leo had a connection to the IU athletic department, and they were able to coordinate a trip for Leighton and his family to attend an IU home game. Not only would they be going, though, but they would get to visit then-coach Tom Crean and the team after the game.

Leighton wasn’t told of this trip until the day of.

“It was a dream-come-true-type of experience,” Leighton said. “In fact, it feels like a dream when I think back to it just because of how it all happened.”

IU beat Houston Baptist, 103-61. Afterward, Leighton and his family visited with Crean and the players. Crean spent more than 10 minutes talking to Leighton, saying how inspired he was of Leighton’s life. He also developed an immediate friendship with Hoosier forward Freddie McSwain.

In 2018, Leighton’s name was featured on a car that was driven in the Indy 500. The car had names of children who had received heart transplants at Riley’s. They were allowed to visit the garage and pit areas during the week and even shook hands with racing legend Mario Andretti — even if Leighton didn’t know who that was.

“I told (Leighton) to go over to the older, Italian man standing over there and shake his hand,” said Leo, recalling the story. “I then said, ‘After you do that and when we get back into the car, I want you to Google who Mario Andretti is.’”

Leighton has a younger brother, Luke, who is 100% healthy. Both kids were home-schooled up through eighth grade before taking high school courses online through Liberty University. Luke is 18 and currently plays for the Benton Bucks, a basketball program for home-schooled players.

In 2017, Luke was looking to start playing at a higher level of basketball. Leo had been a coach for the Bucks in the past and worked with the current varsity coach, David Wright, at Forest River. When Wright asked Leo to become his assistant coach, it was a no-brainer move.

With Leo back involved in coaching and Luke playing, Leighton was also hoping to find a role with the team.

“They needed a camera guy and needed someone to film the games, and I was like, ‘OK, cool. I can make highlights,’” Leighton said. “Making highlights just kind of happened. I’ve been doing that ever since.”

Since he spent most of his winters inside his house, Leo had provided Leighton with a nice computer to pass time. Leighton had explored video editing in the past, but didn’t have much content to work with. By being the Bucks’ video person, he now had a plethora of video at his disposal.

He’s used it to his advantage.

Leighton is constantly making highlight videos and mixtapes of players, games and anything else that comes to his mind to promote the team. They’re seen by hundreds of people online, whether it be through Twitter, Facebook or Instagram. He’s even started taking requests from other players and teams not on the Bucks, and filming and making videos for them to use as well.

Wright believes his videos have helped grow the Bucks’ brand tremendously in the past few years.

“You can be a decent team and play OK, but I think some of those videos and some of those things give us some more exposure, even just within the home-school community,” Wright said. “It’s one thing to say a kid had 25 points; it’s another thing to have some cool highlights and hype videos.”

Leighton has become an integral part of the Bucks’ success. They entered this season ranked No. 6 in the national home-school rankings.

“He’s friends with everybody on the team and has been friends with them for many, many years,” said Luke of his brother. “They always include him in the hype circles and whatever we’re doing pregame, so he always brings a certain energy to that.”

“There’s a lot of passionate people in the Bucks,” Leighton added. “They just love to be around basketball, and that’s really fun to be around. We’re all really good friends.”

Leighton isn’t sure what comes next. He currently works for his dad at Forest River and just completed his degree at Liberty. While he enjoys making the highlight tapes, he’s not sure if he wants to make a career out of it.

Whatever he does, the people around him know he’ll be successful at it.

“It’s rare to find a 20-year-old that’s gone through this, and all he’s about is other people and not himself. ... He always sees the positives in everything,” Wright said.

Leighton will need a new heart eventually. It will be the third heart he has in his life. No matter the number of physical hearts he has, he’s given it all to everyone around him.

“It was actually a big answer to prayer,” Leighton said. “I couldn’t play sports, yet I’ve been involved in so many things with sports. It’s like I can’t play, but God has allowed me to do mixtapes and reach so many people with that. … I never thought it would happen, but God orchestrated it that way.”