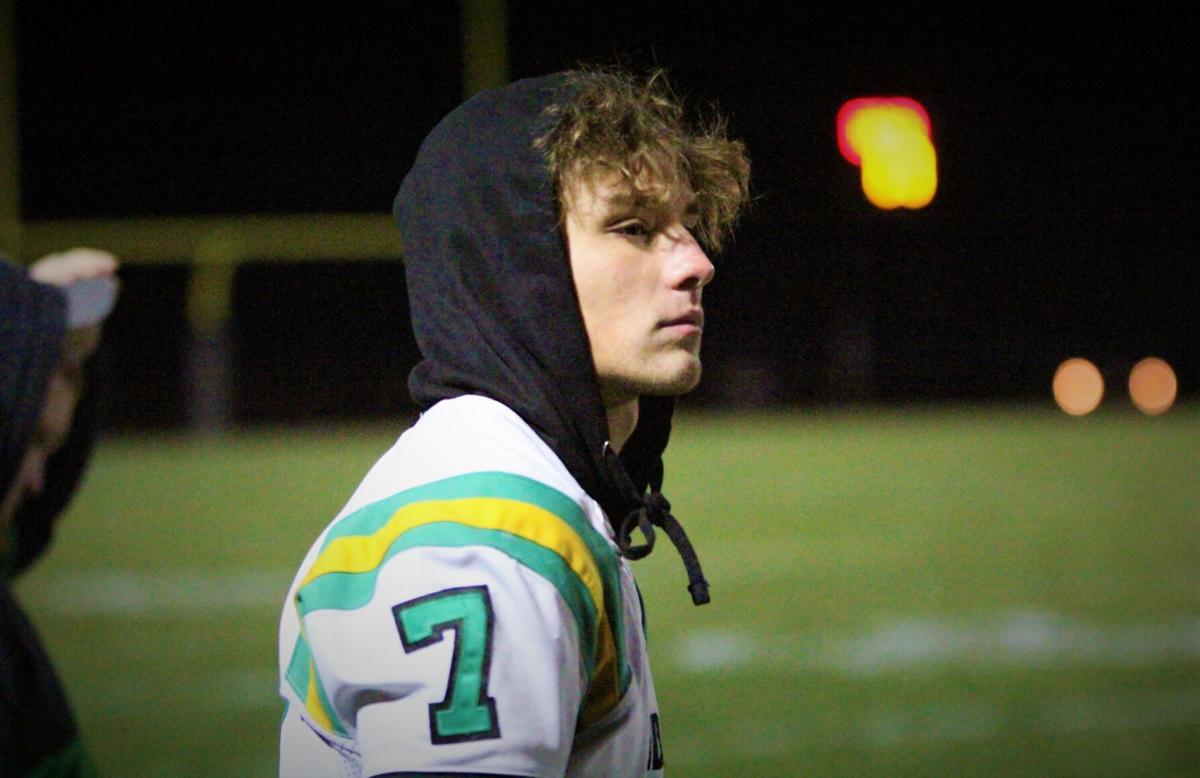 Northridge senior Micah Hochstetler looks on from the sideline during last Friday’s Class 4A semistate championship at New Prairie High School in New Carlisle. Hochstetler has been out with an ankle injury since September, but has continued to be a leader for the Northridge team throughout the season. 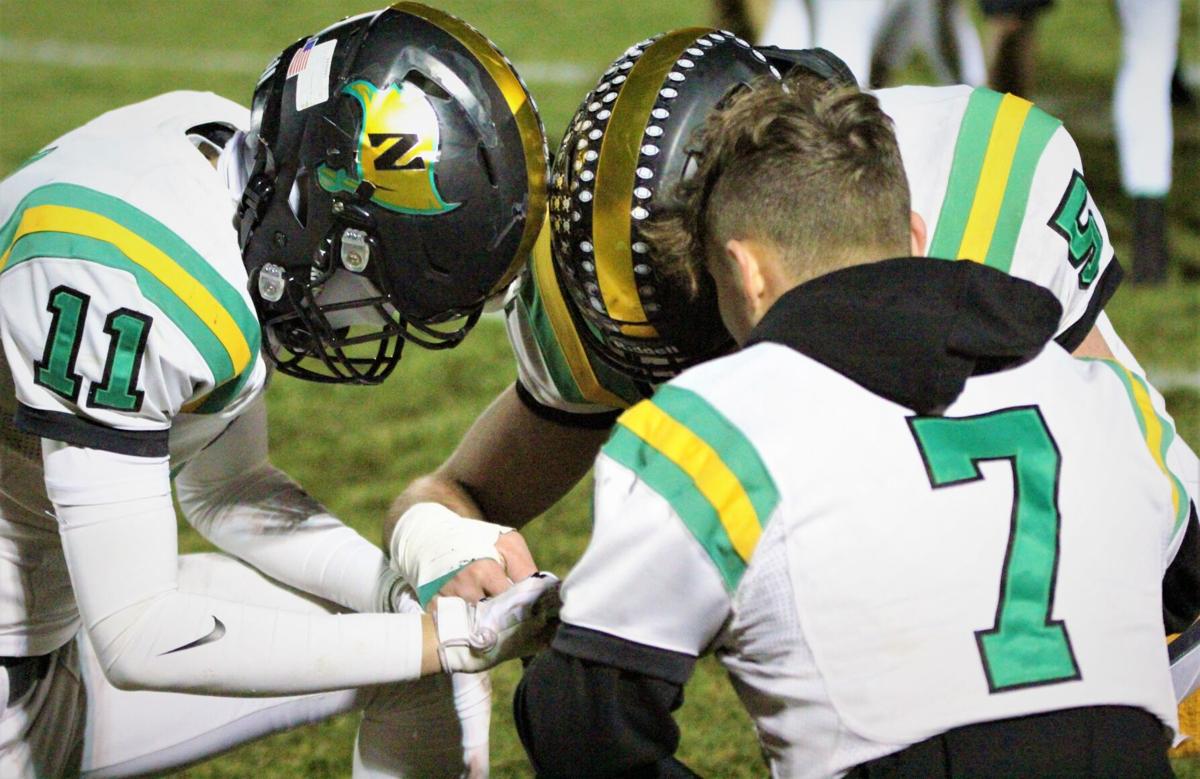 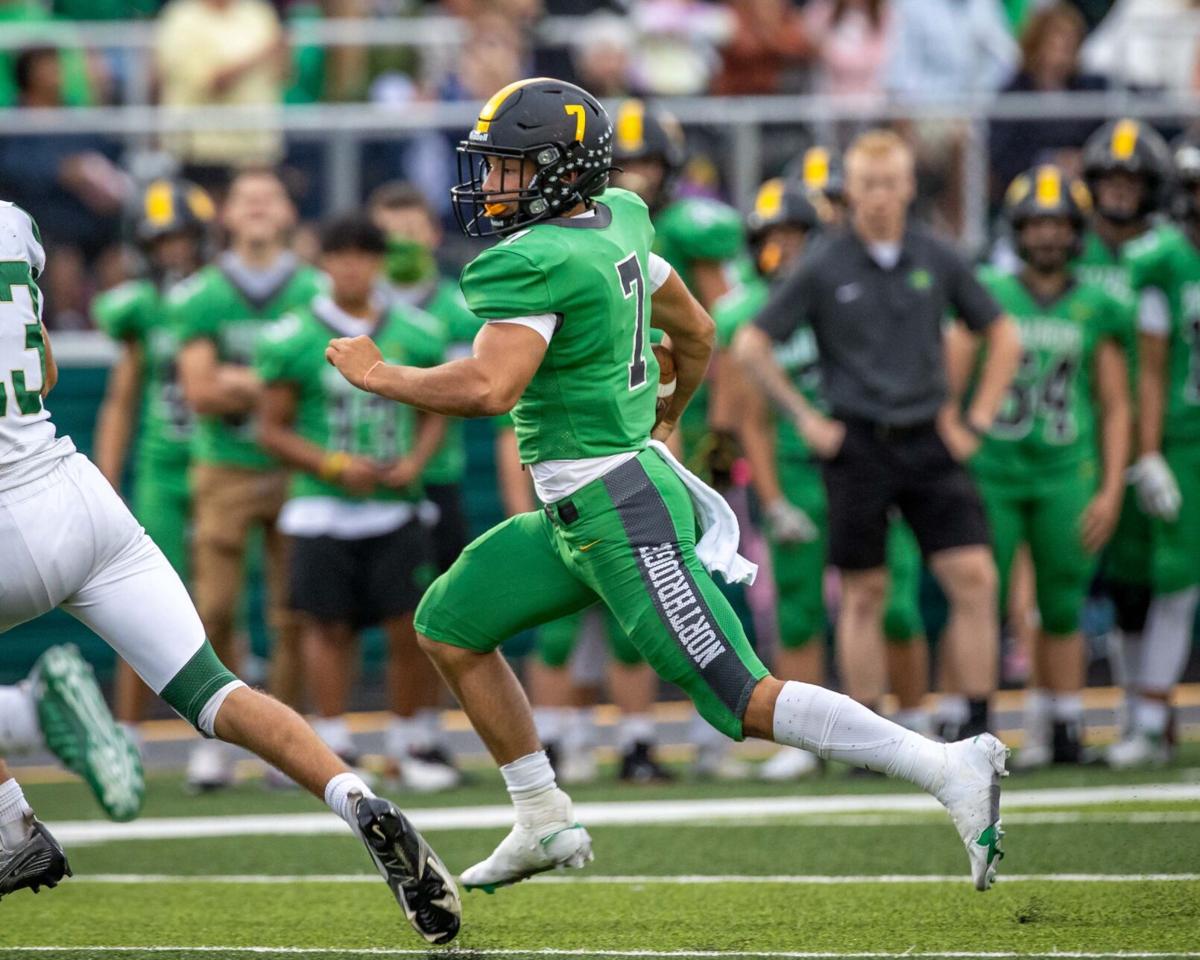 Northridge quarterback Micah Hochstetler (7) scrambles during a game against Wawasee on Sept. 3 at Northridge High School in Middlebury.

Northridge senior Micah Hochstetler looks on from the sideline during last Friday’s Class 4A semistate championship at New Prairie High School in New Carlisle. Hochstetler has been out with an ankle injury since September, but has continued to be a leader for the Northridge team throughout the season.

Northridge quarterback Micah Hochstetler (7) scrambles during a game against Wawasee on Sept. 3 at Northridge High School in Middlebury.

MIDDLEBURY — After waiting anxiously for most of his high school career to get his opportunity, Northridge senior Micah Hochstetler was given the nod to lead his team as both the starting quarterback and a captain heading into his final year.

Led by Hochstetler, the offense ran like a well-oiled machine during the first three contests, scoring a combined 102 points during the three-game winning streak to open the season. Heading into Northridge’s fourth game against Plymouth, Hochstetler was 21-of-36 for 296 passing yards and six touchdowns through the air. As a dual-threat quarterback, he added 118 yards and a touchdown on the ground.

In pursuit of the team’s fourth straight win, the senior quarterback continued his impressive play. Hochstetler had both rushed for and thrown a touchdown, helping Northridge build a decisive lead over the Rockies in Plymouth.

The Raiders would go on to blank Plymouth 35-0 and improve to 4-0, but it came at the expense of arguably the team’s most important player.

During the second quarter, Hochstetler was grabbed from behind and tackled awkwardly on a running play. The senior signal-caller instantly knew something wasn’t right.

“At first, I just thought it was my knee, but then my ankle got worse and worse as I started walking,” Hochstetler said. “I didn’t think it was going to be bad necessarily, but then the next day, it was pretty bad. It was pretty disappointing.”

Hochstetler had suffered a dreaded high-ankle sprain, one of the more nagging injuries an athlete has to deal with. It can take several weeks to heal, and sometimes requires surgical repair.

Early in the week following the injury, Hochstetler took to the practice field in hopes of tapping up the injured ankle and gutting it out. But as the practice went on, the pain became impossible to ignore. At that point, the standout quarterback knew the rest of his season was in jeopardy.

“I wanted to play. I didn’t want my season to be over,” Hochstetler said. “It was probably the toughest moment in my life, for sure, just because I had really bought into the ‘Why not us’ mentality. My dream was to go to state; my dream was to win games. To have it kind of crumble down was tough, but I learned a lot of things.”

Initially, after his successful ankle surgery, being involved in practice and at games was hard for the senior. At one point, Hochstetler had to walk off the field during a practice because the emotions were just too great for him.

Since then, Hochstetler has channeled his disappointment into a support source for his teammates and coaches. Even through the team’s difficult slump during the second half of the season, Hochstetler has roamed the sidelines in his number ‘7’ jersey during every game. Often, you’ll see him conversing with a coach or congratulating a teammate. He’s made it a point to stay engaged with his team despite being unable to make an impact on the field.

“I would say he’s impacted us a lot,” said Northridge senior Evan Kaehr of Hochstetler. “You go and talk to someone, and it’s always Micah. He’s always tuned-in 100% and he knows whatever’s going on at all times. So, it’s just helped us a lot.”

“Even as a player that knows he’s not going to play the rest of the season, he still knows the game plan,” Northridge senior Clint Walker added. “He still knows the scouting report, so I can still ask him questions like I could in September.”

The evolution of Northridge’s offense during its extended postseason run has come to fruition because of a multitude of reasons, and Hochstetler has been one of them. Since junior Tagg Gott was called on to take over under center, Hochstetler has been there ready to greet Gott after an offensive series. This past Friday night, some of Micah’s advice helped Gott connect with Micah’s brother, junior Jethro Hochstetler, in what was the game-clinching touchdown pass to win the semistate game against New Prairie.

“Micah said all I have to do is wait a little bit longer on those play-action passes and then just throw it up and they’re going to be there,” Gott said. “I was overthrowing them by just a half a step. Then, I waited just a half a step longer, threw the ball and Jethro was there.”

“When we started (the season), it was nice because Micah would run the plays, and we would talk about how it went, what he felt, if he liked something here, if he’d rather do this; you know, kind of feed off each other,” Eppley said. “We kind of gave each other ideas, and stuff like that. And then, even after he got hurt, we’d still go back and he’d be there at practice every day, saying, ‘Hey, what do you think about this?’ It’s been huge. I trust him. He knows football, so if he likes something, we’re going to try it and see how it looks.”

Now, after missing the last 10 games, Hochstetler expects to be cleared to practice this week. If all goes well, he won’t be in street clothes on the sidelines. This time, he’ll be in uniform, running out of the tunnel at Lucas Oil Stadium in pursuit of the program’s first state championship.

“I’m not promised to play, and just watching my friends play — like watching them win semistate and my brother (Jethro) catching the game-winning touchdown — it’s just amazing,” Micah said. “I just kind of cherish those moments instead of thinking about myself.”