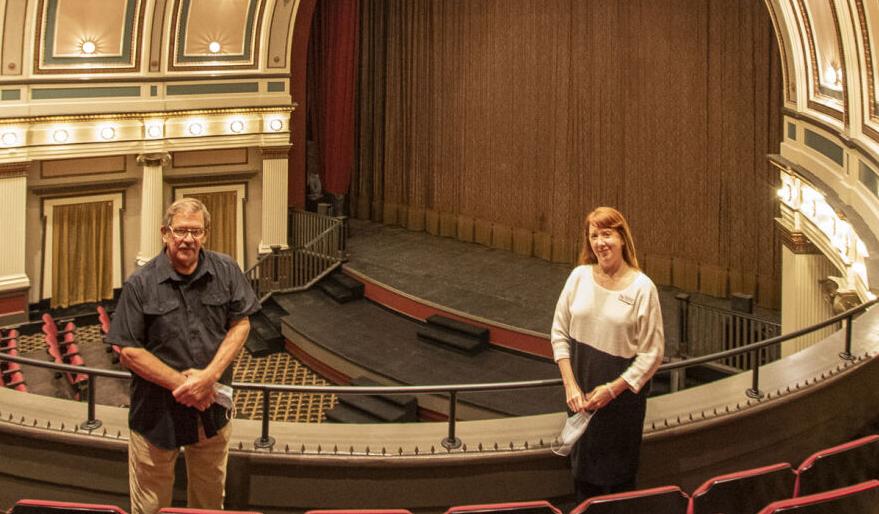 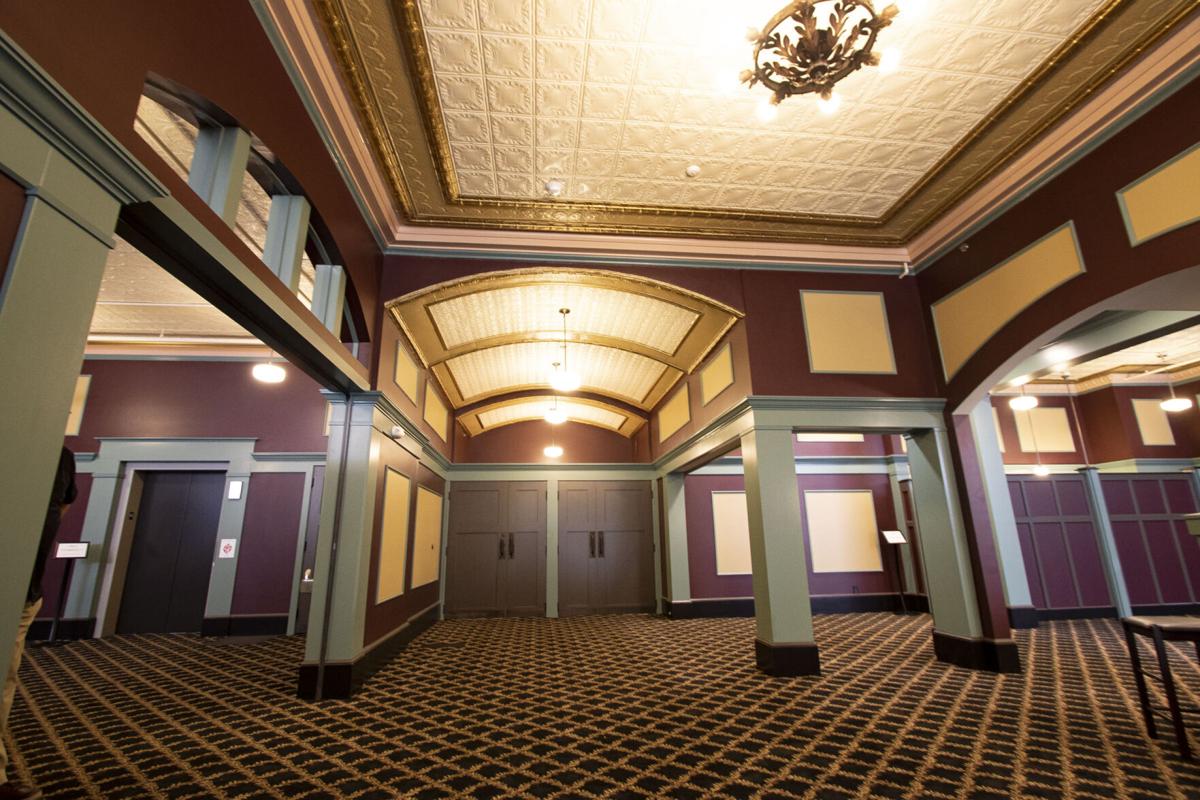 The interior of the newly renovated lobby of the Goshen Theater is illuminated Monday. 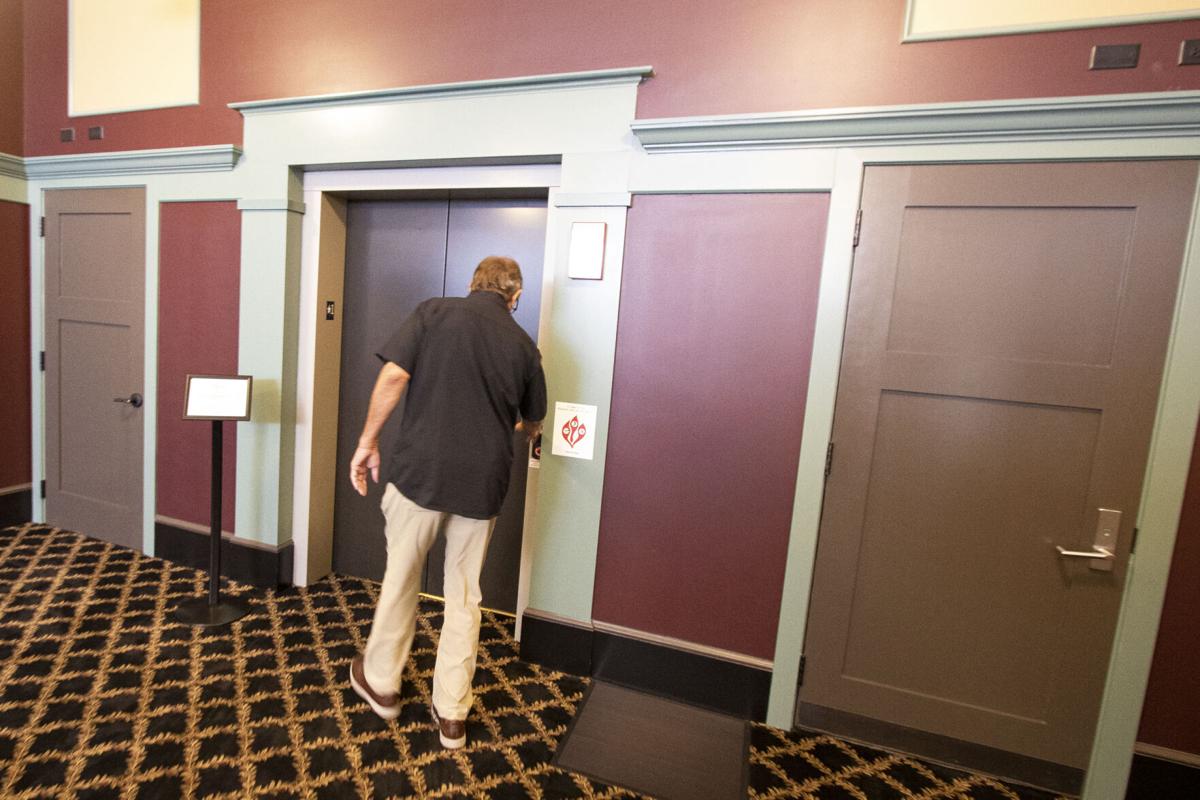 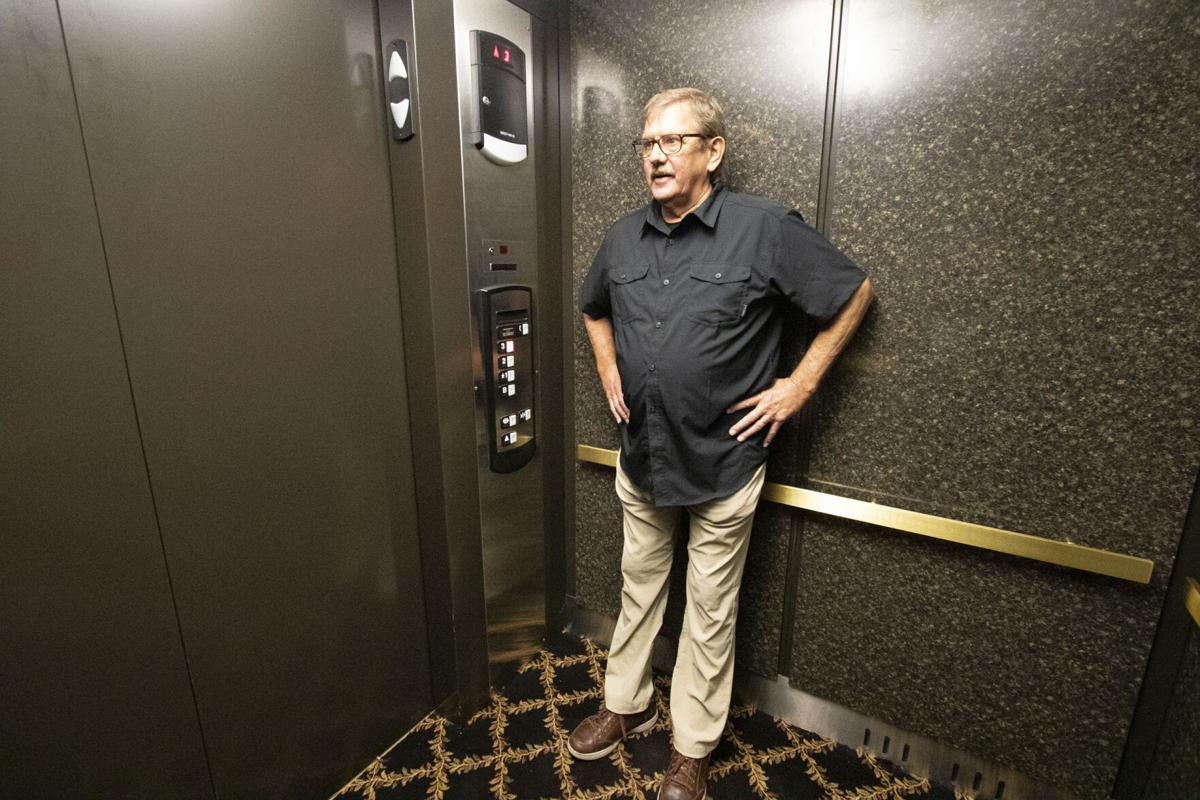 Thomas gives a tour of the ballroom Monday on the third floor. 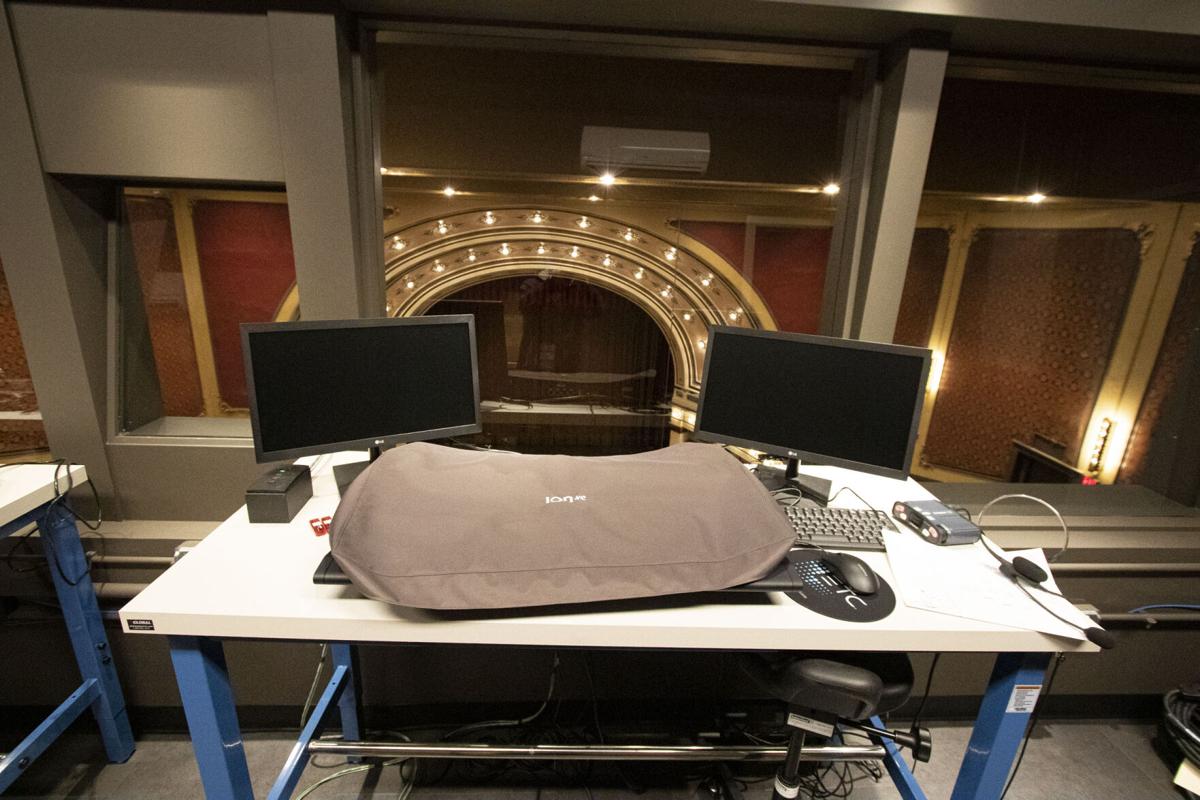 The lighting and sound control room can be seen Monday on the third floor. 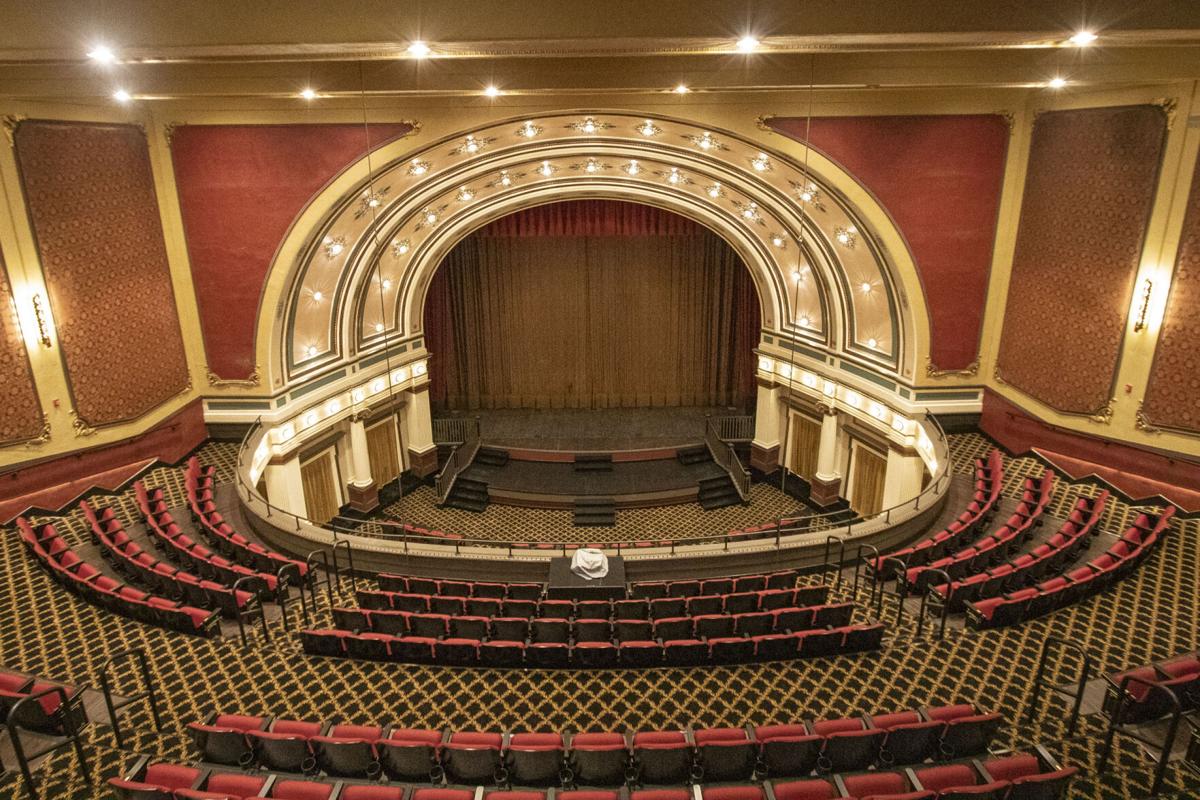 An interior view of the Goshen Theater auditorium can be seen Monday. 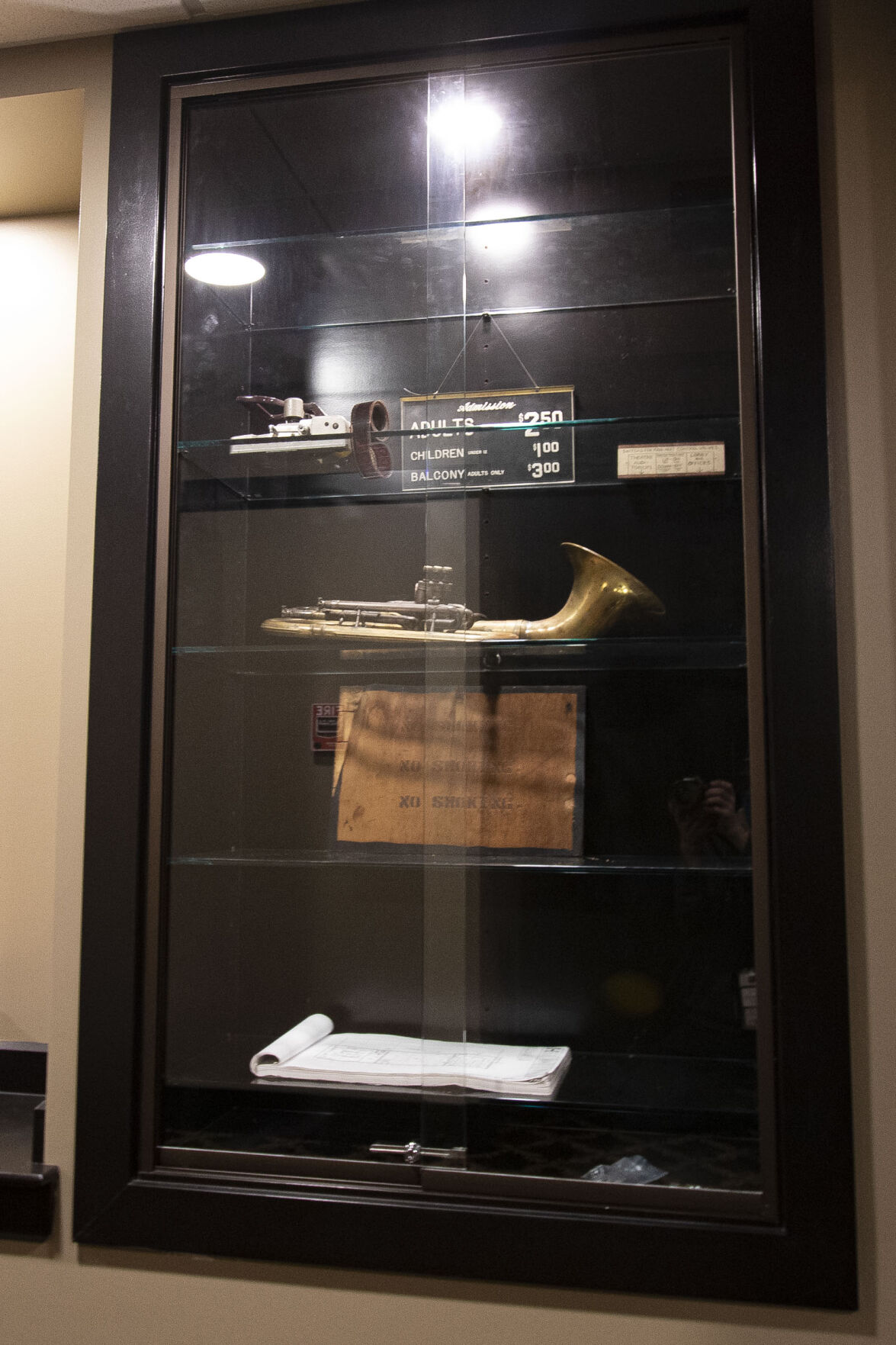 Theater artifacts sit on display near the restrooms Monday in the basement of the Goshen Theater. 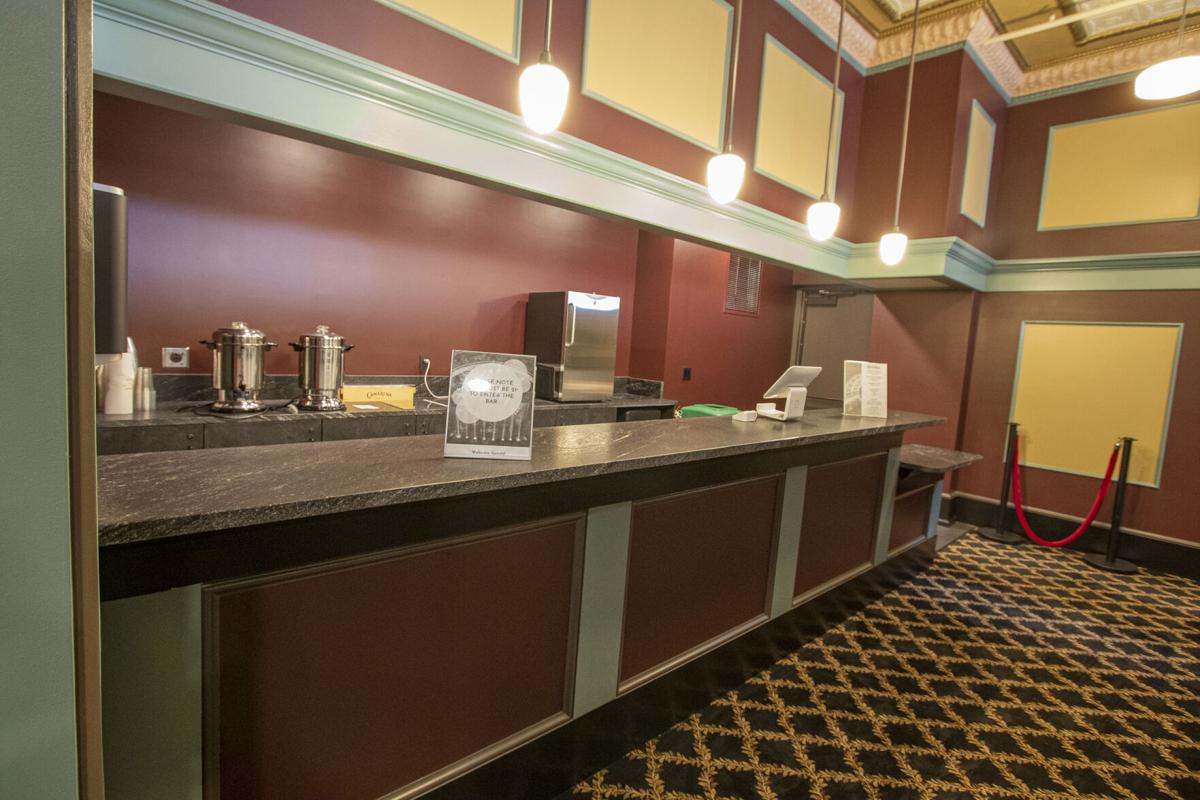 The bar on the right side of the main lobby of the Goshen Theater is illuminated  Monday. 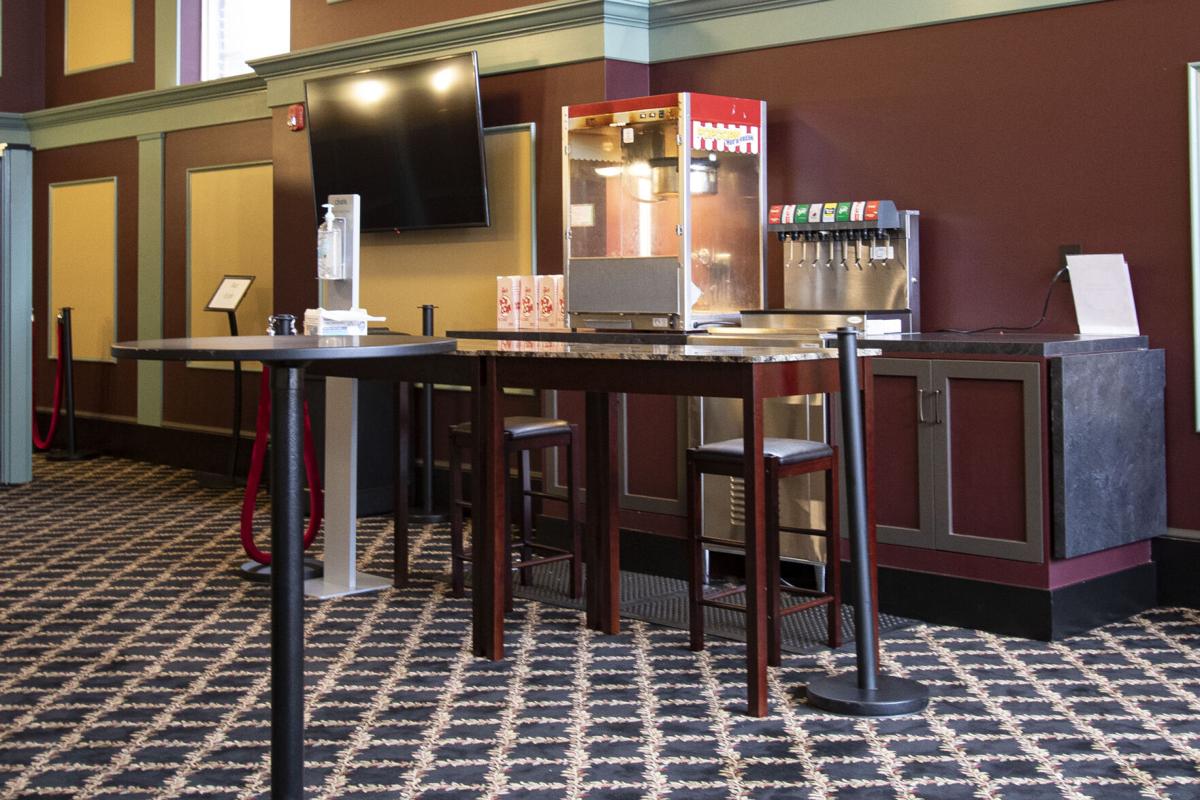 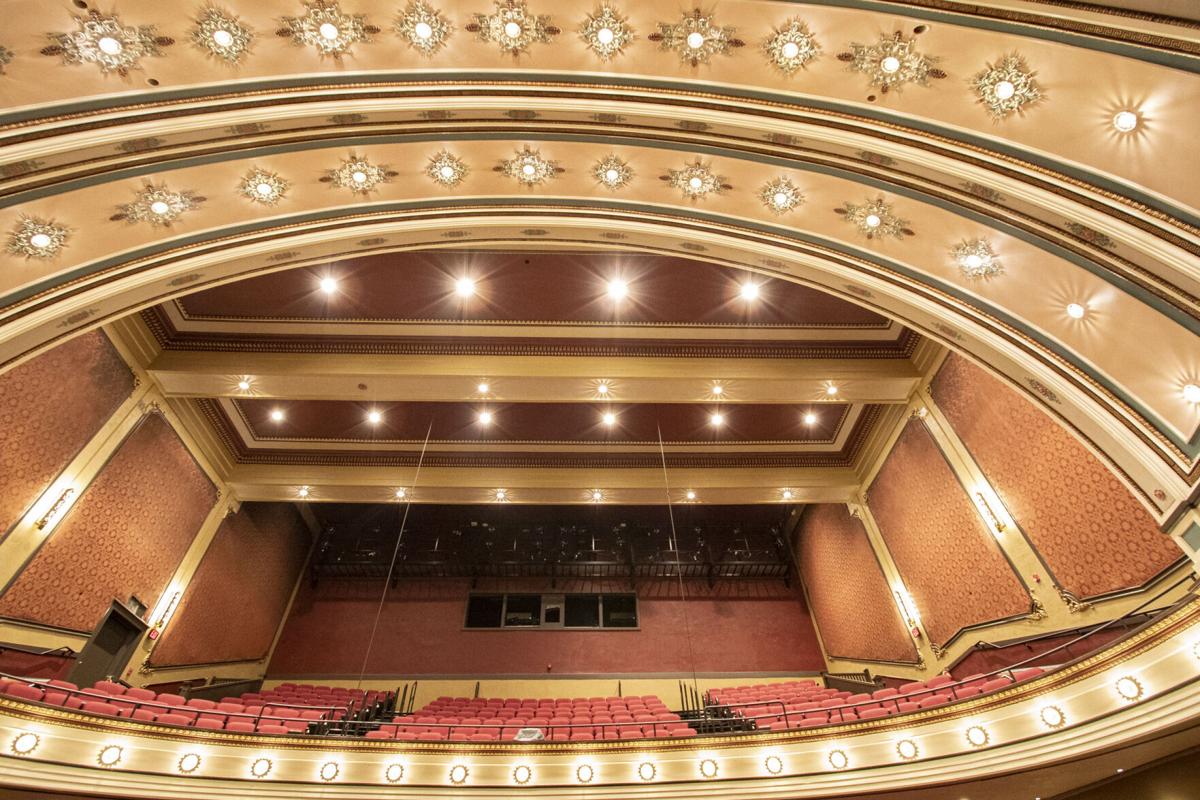 Lights shine down on the balcony seating in the auditorium. 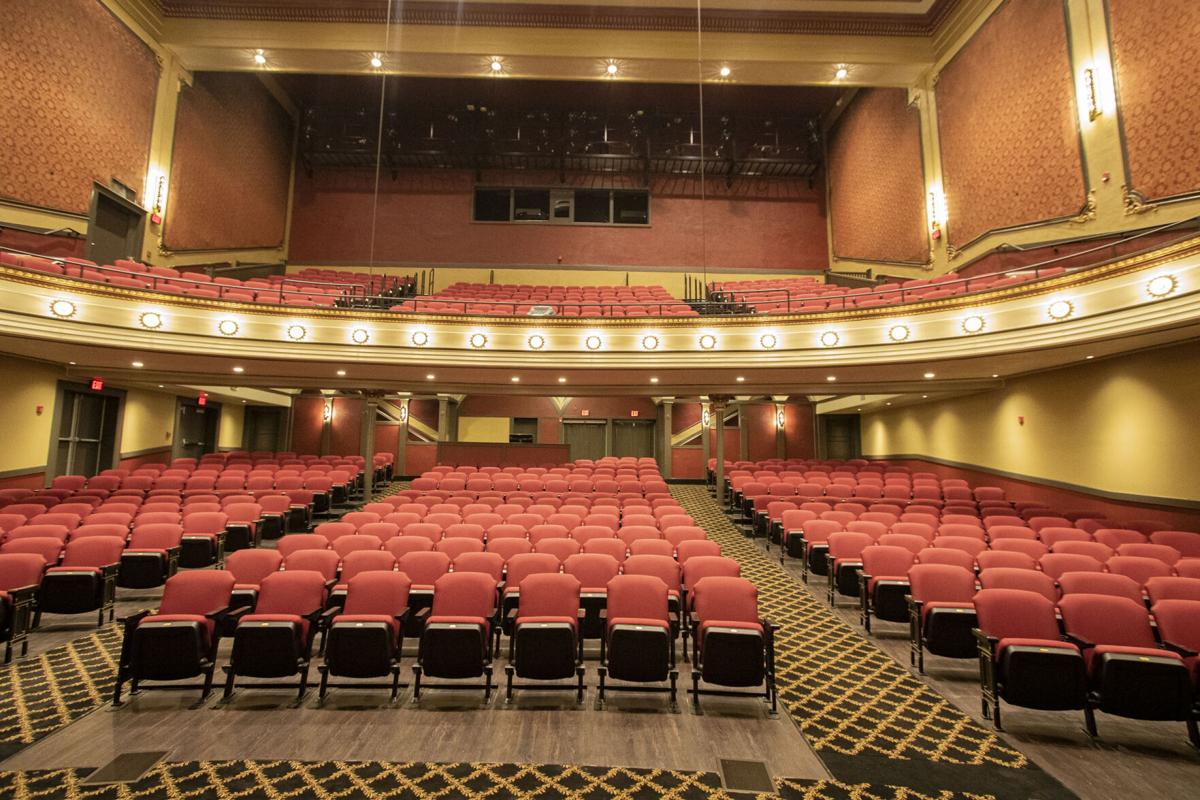 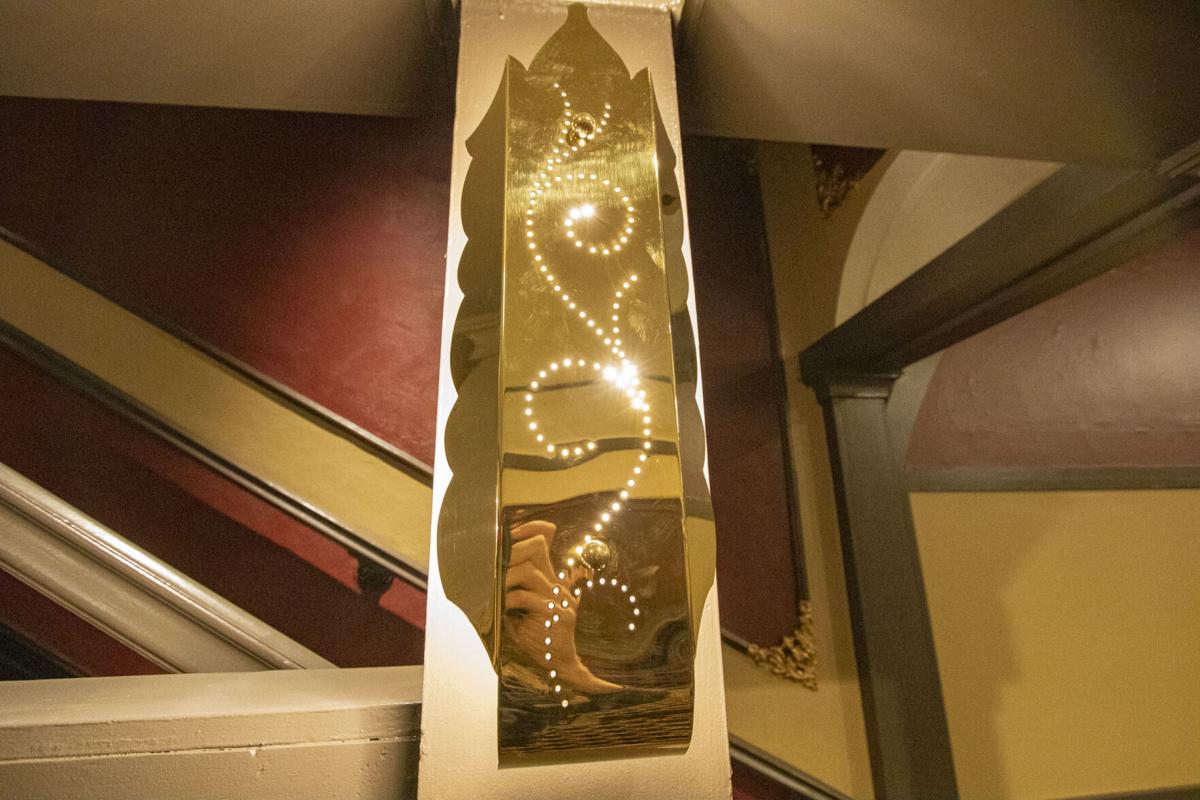 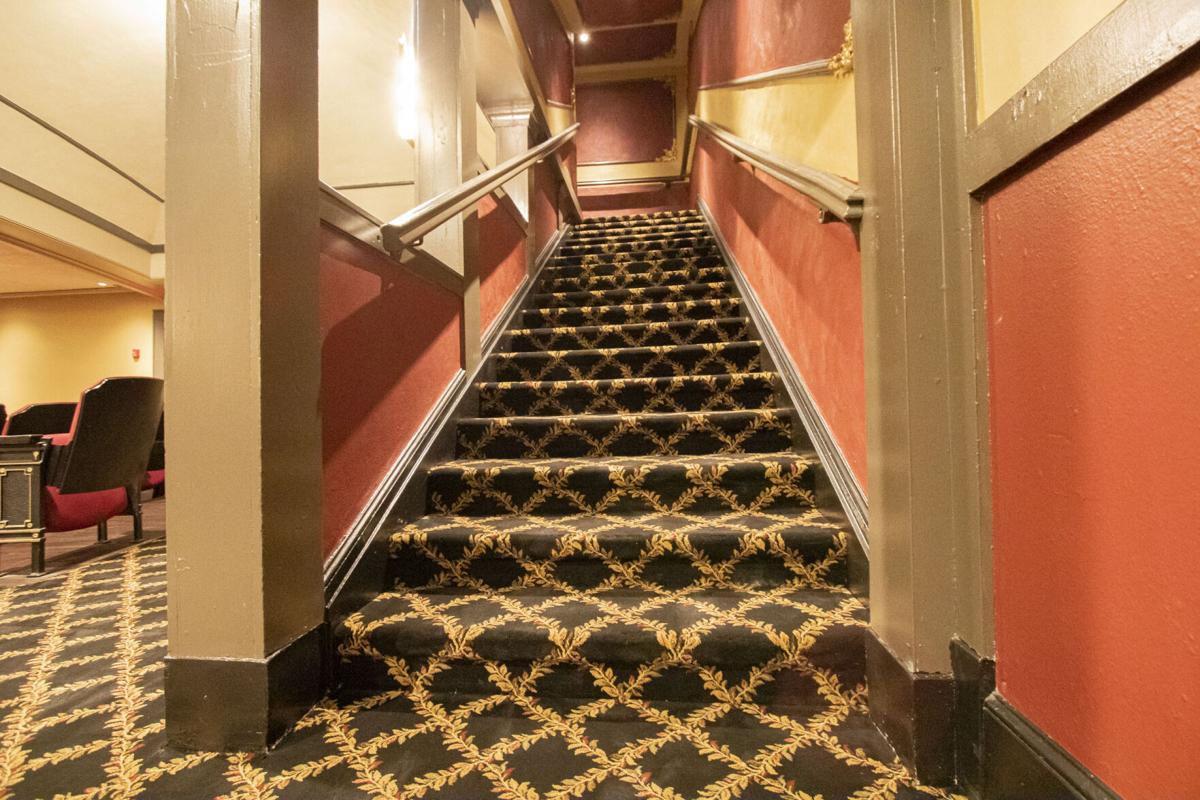 New carpet was installed throughout the theater. 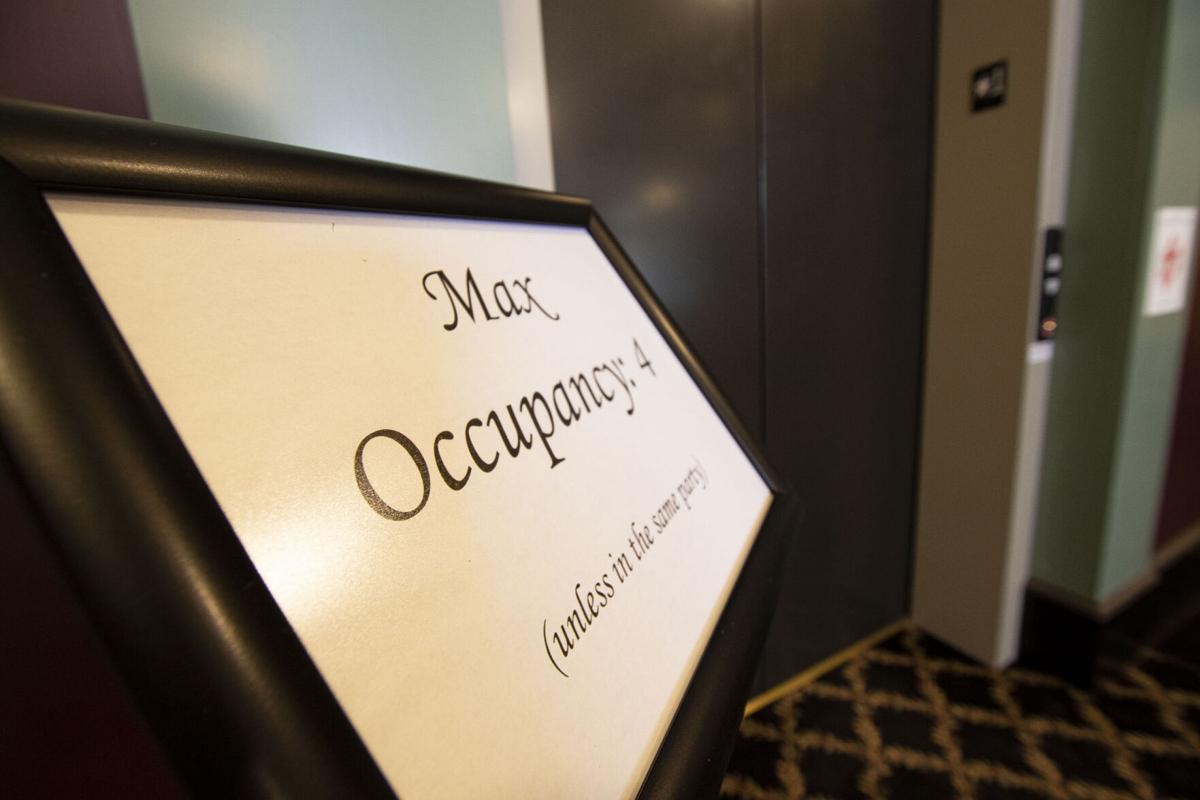 An elevator was installed in the theater. 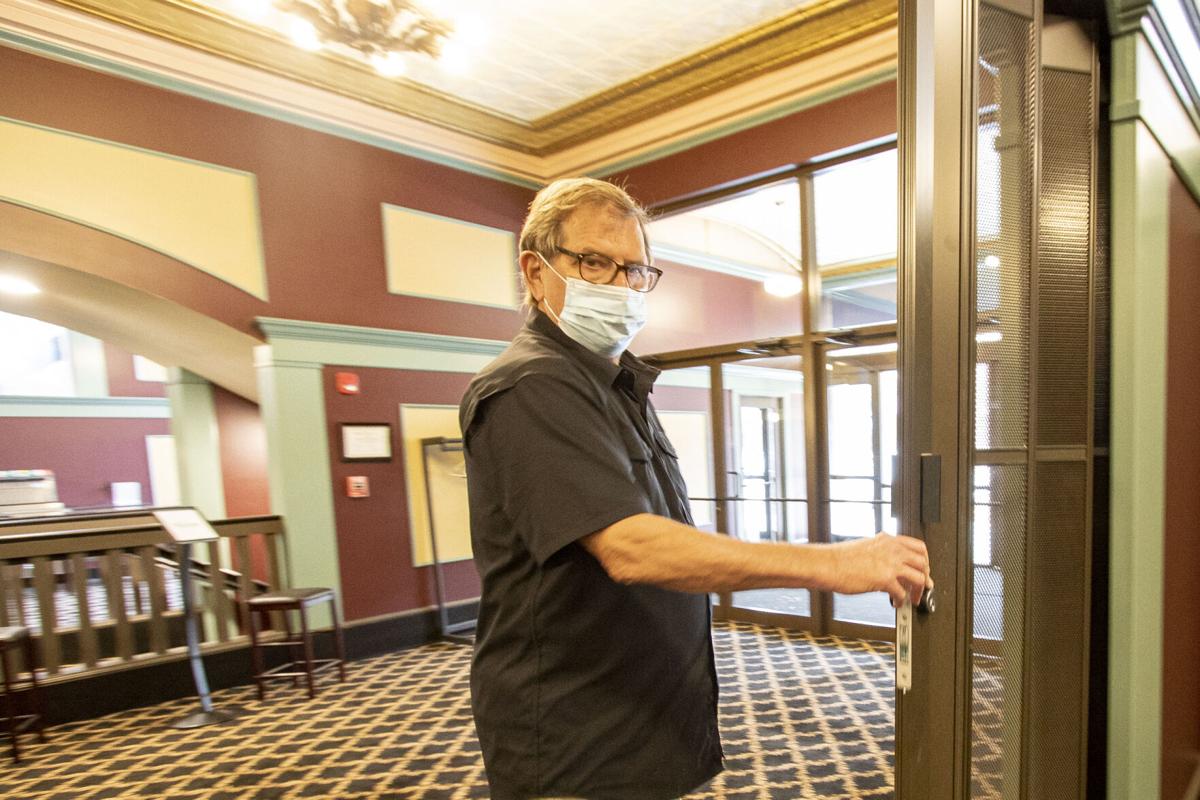 Thomas closes a retractable wall in the main lobby Monday.

The interior of the newly renovated lobby of the Goshen Theater is illuminated Monday.

Thomas gives a tour of the ballroom Monday on the third floor.

The lighting and sound control room can be seen Monday on the third floor.

An interior view of the Goshen Theater auditorium can be seen Monday.

Theater artifacts sit on display near the restrooms Monday in the basement of the Goshen Theater.

The bar on the right side of the main lobby of the Goshen Theater is illuminated  Monday.

Lights shine down on the balcony seating in the auditorium.

New carpet was installed throughout the theater.

An elevator was installed in the theater.

Thomas closes a retractable wall in the main lobby Monday.

The Goshen Theater is back in business after undergoing more than a year of renovations. But fully getting back to business will be a struggle as COVID-19 continues playing the villain of 2020.

The approximately $6 million project wrapped up in August with a list of dozens of improvements completed on all levels of the building in downtown Goshen.

The challenge now, however, will be weathering the pandemic before the historic theater can open its doors to audiences en masse for the first time since the renovations began in May 2019. Theater leaders say they hope to resume programming sometime next year, but they’re moving forward carefully. In the meantime, managing director Amber Burgess said the venue can be made available to rent for small, private events where social distancing can be maintained.

“We roll with the punches. We’re very flexible with how we’ve been approaching public events,” Burgess said.

She said the initial plan was to have events resume at the theater by July. But the coronavirus hit with effects that included temporary business closures, a disruption of the entertainment industry, and a delay in renovation work at the theater. The annual River Bend Film Festival, which holds screenings at Goshen Theater as part of the event, was pushed back to the beginning of this month and held virtually instead.

Actor Ed Asner was also scheduled to appear at the theater as part of the touring show “God Help Us!” in September, but that event ended up being canceled in August, Burgess said. She added Asner and stand-up comedian Christopher Titus are expected to reschedule their local dates.

“We’ve got quite a few people that are slated, like ready, to come back as soon as things are back to normal,” Burgess said.

When the theater does reopen to audiences, she thought the Free Friday Movies program would be the first to resume. Fans can watch classic films at no price of admission since local businesses help pick up the costs for those days. Burgess was excited to bring that event back.

“Something to just say sort of like, ‘Thank you to the citizens of Goshen.’ We love doing free films here too,” she said, slipping in a call for financers. “And we’re looking for underwriters for 2021 if people are interested. It’s’ very reasonable, it’s a great gesture.”

Dozens of updates and upgrades were made as part of the renovation project. The women’s restroom on the first floor near the auditorium was among the stand-out improvements.

“We went from that room back there with two stalls in it to 14 stalls in the women’s and two for the men. And it’s beautiful,” said Everett Thomas, theater board president.

Burgess added that each floor of the building now has a family restroom. They were also excited about the installation of an elevator for the first time, which runs from the basement to the third-floor ballroom.

Stage lighting and sound improvements were also made, including a new catwalk and lighting truss above the balcony and a new floor-level control booth. The previous seats were also replaced with new wider seats and more space between rows. Thomas and Burgess said the auditorium lost about 100 seats in the process, with now about 598 total.

Burgess pointed out a lot of the renovations were designed to improve comfortability.

“There’s so many things about the theater too that, when someone comes in they’ll be excited or impressed with. But so many of the improvements that we’ve made have been just about comfort, accessibility and usability. So, that’s not maybe the first things that people think of, like the ladies’ restroom or the elevator. And I think the things they’ll be truly impressed and dazzled by are things like the arch, and the new seats and the paint. It really is a new and improved space for Goshen,” Burgess said.

Other improvements included widened lobby areas with the bar and concession stand together on one side; the installation of a fire suppression system; fresh paint jobs; gold leaf painted by hand; new carpeting; new stage curtains; repairs to the tin ceilings; repairs to the ballroom on the third floor; a green room for performers in the basement; a new backstage dressing room; new heating and air conditioning units; and new connections to city utilities.

A news release from the Goshen Theater board announced the renovated auditorium has been named Miller Auditorium after Galen Miller and Sue Neeb of Miller Poultry. The board thanked Miller and Neeb for supporting the fundraising campaign that led to the renovation to a level where the project was expanded to include auditorium improvements.

The release describes the project as costing $6 million, which included an $850,000 endowment to support operational expenses.

“We paid all of our bills, and there’s not debt on the building. So the only thing we have to do is generate the funds to pay staff, and pay the insurance and pay the utilities. It feels really good to have gotten to this point,” Thomas said.

But the work’s not done yet. This project was considered the first phase of producing improvements and upgrades, and now a Phase 2 is being planned. Needs include additional fire-suppression system work, permanently installing a new film projector in the third-floor booth, and better dressing areas under the stage.

“Our under-stage area and dressing rooms will need to be addressed at that point as well. Be nice to have some new plumbing, maybe some actual rooms for people to get dressed in under the stage,” Burges said.

She estimated the theater would need about $2 million for the next round. She anticipated the new work starting in approximately five years.