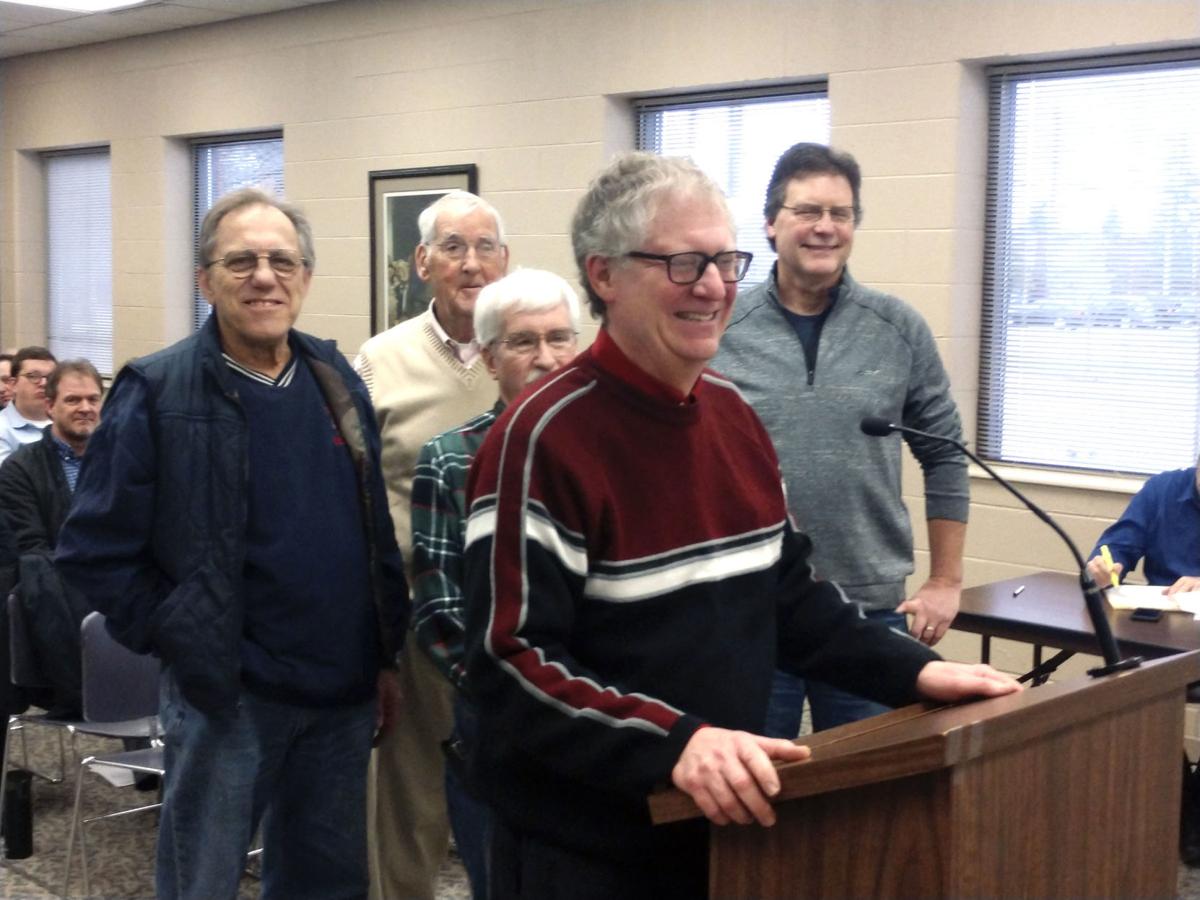 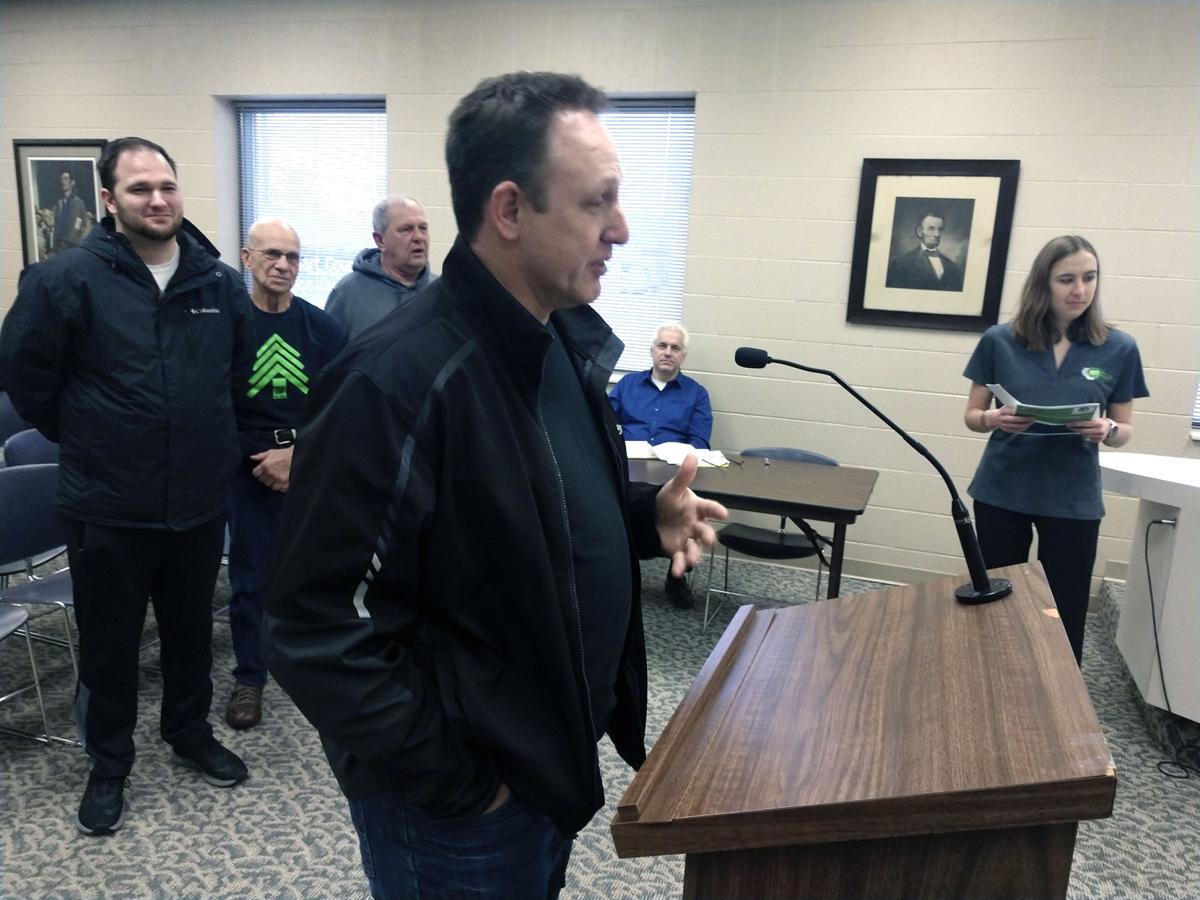 Ben Hahn, director of Prairie Camp, speaks to the Elkhart County Commissioners after his team won $8,694 from the second annual leaf collection competition. The team finished third. Behind him are team members, from left, Adam Wachtman, Dick Holdeman and Dave Hahn. 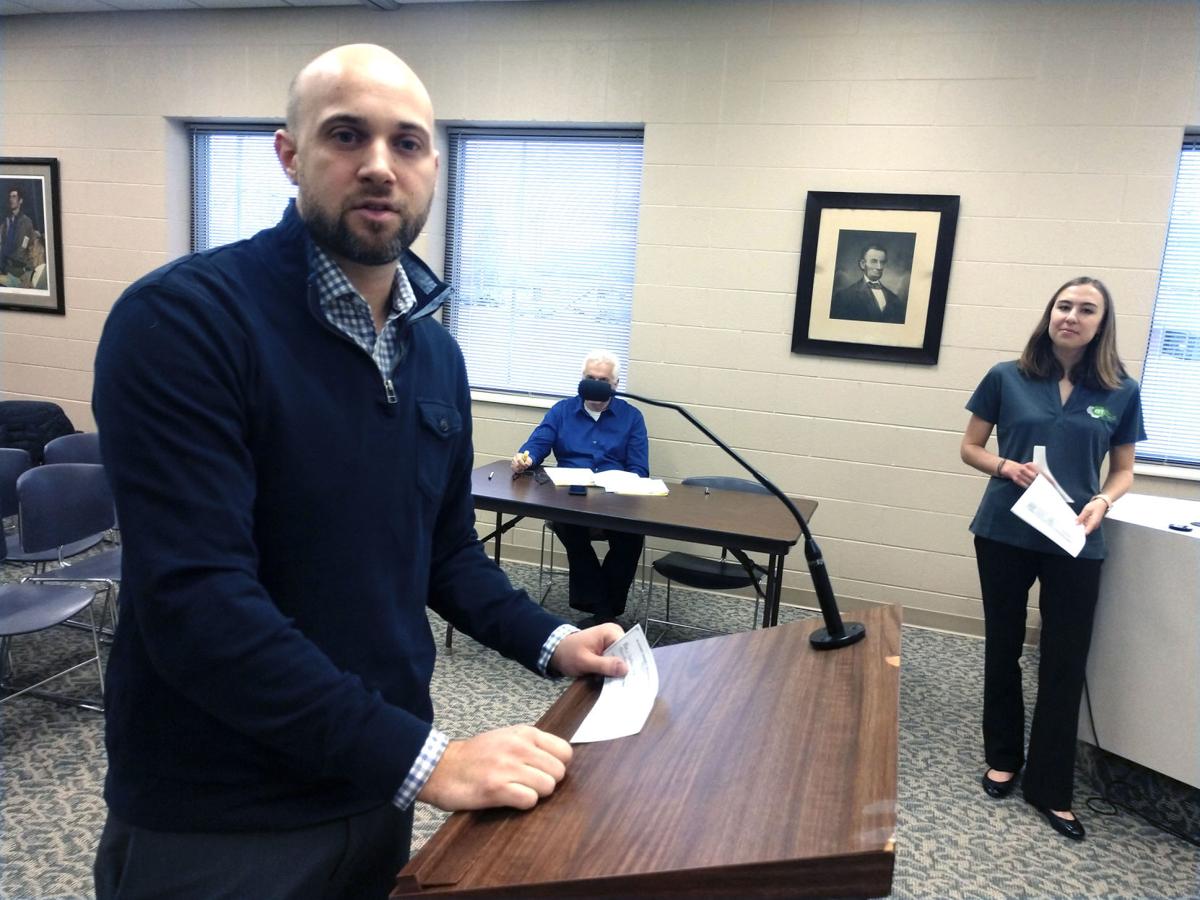 Weston Troyer of Yellow Creek Mennonite Church speaks to the Elkhart County Commissioners after receiving a $9,215 check from the second annual leaf collection competition. His team finished second in the program.

GOSHEN — Though fewer teams participated, they succeeded in dumping more leaves at the landfill in the second year of a county-sponsored leafcollection competition.

Checks were handed out to winning teams during the Elkhart County Commissioners meeting Monday. They each claimed a share of $50,000 the county, through the solid waste management district, put up again for the competition last fall.

The program, which launched in 2018, encourages residents to gather leaves in a bid to reduce leaf burnings in the county.

“Before this started, we would have a haze of smoke, and it would stink for weeks,” Armon Kauffman of team Sunnyside Mennonite Leaf Relief told the commissioners.

Kauffman believes the competition has made a difference.

Nearly 218 tons of leaves were collected and taken to the landfill by 13 teams during the competition, which ran from Sept. 16 through Dec. 6, Allison Egan of enFocus said as she presented the results. Through the South Bend-based civic consulting firm, she helped the county implement the program.

By comparison, the program’s inaugural run in 2018 had 21 teams, of 26 that signed up to participate, dump about 181 tons of leaves in the landfill.

So while participation decreased, the amount of gathered leaves jumped by about 20%, the numbers show.

Egan also noted 15 teams signed up for the 2019 competition, but two ended up not participating, leaving the other 13 teams to reach the one-ton threshold for qualifying for the prize money.

Several of them had returned in 2019 after participating in 2018.

The group from Central Christian Church in Elkhart took first place after collecting 70.64 tons of leaves and making 136 trips to the landfill. They far surpassed the 17.66 tons they collected to finish fourth in 2018.

Pastor Doug Cripe told the commissioners the church had a lot of participants young and old step up to participate last fall. The competition also fits the church’s mission.

“We’ve been a green church for many, many years, trying to reduce our disposable items,” Cripe said. “We do recycling, we’ve done scrap metal collection, and so collecting leaves fits real well into who we are at the church.”

At first place, the team took the greatest share of the prize funds with a check for $15,292. Cripe said the winnings from 2018 were used to replace the aging furnace at the church along West Franklin Street. He plans to put the new check toward air conditioning maintenance.

The Yellow Creek Mennonite Church’s youth team in Goshen finished second again, collecting 42 tons of leaves to beat their total from 2018 by 11 tons. The effort earned the team a $9,215 check.

Weston Troyer, a youth sponsor at the church, said the competition was a great opportunity for the youth and adults who participated to help the community and build relationships.

“Getting the youth together, doing that service, and getting to know each other a little better,” Troyer said.

The church used part of the 2018 winnings to help run a summer camp for refugee children in Lancaster, Pennsylvania, Troyer said. A similar project is planned with the new money this year, he said.

The inaugural year winner, Prairie Camp, finished third after the 2019 competition with 39.58 tons of leaves collected. The group’s total was similar to 2018 as they gathered leaves from the camp’s 36-acre property along C.R. 9 west of Goshen, said Ben Hahn, camp director.

Hahn plans to put the team’s $8,694 check toward scholarships for summer camps and building maintenance.

“Our camp is going to be 140 years old this year. So, it’s really old, and some of the buildings look like it. We’re always remodeling, and it’s going to help with that too,” Hahn said.

The camp, as part of the Missionary Church’s north central district, serves as a retreat ministry with programs for children and adults.

Not all of the teams last year came from churches. Egan said a variety of people participated, ranging from individual efforts to larger groups that had different reasons for volunteering.

Seven of the winning teams appeared at the commissioners meeting to collect checks.

The competition so far only covers unincorporated areas of the county.

The county’s solid waste management district has further details about the competition online at www.ElkhartCountySWMD.com/leaf-collection-competiton.