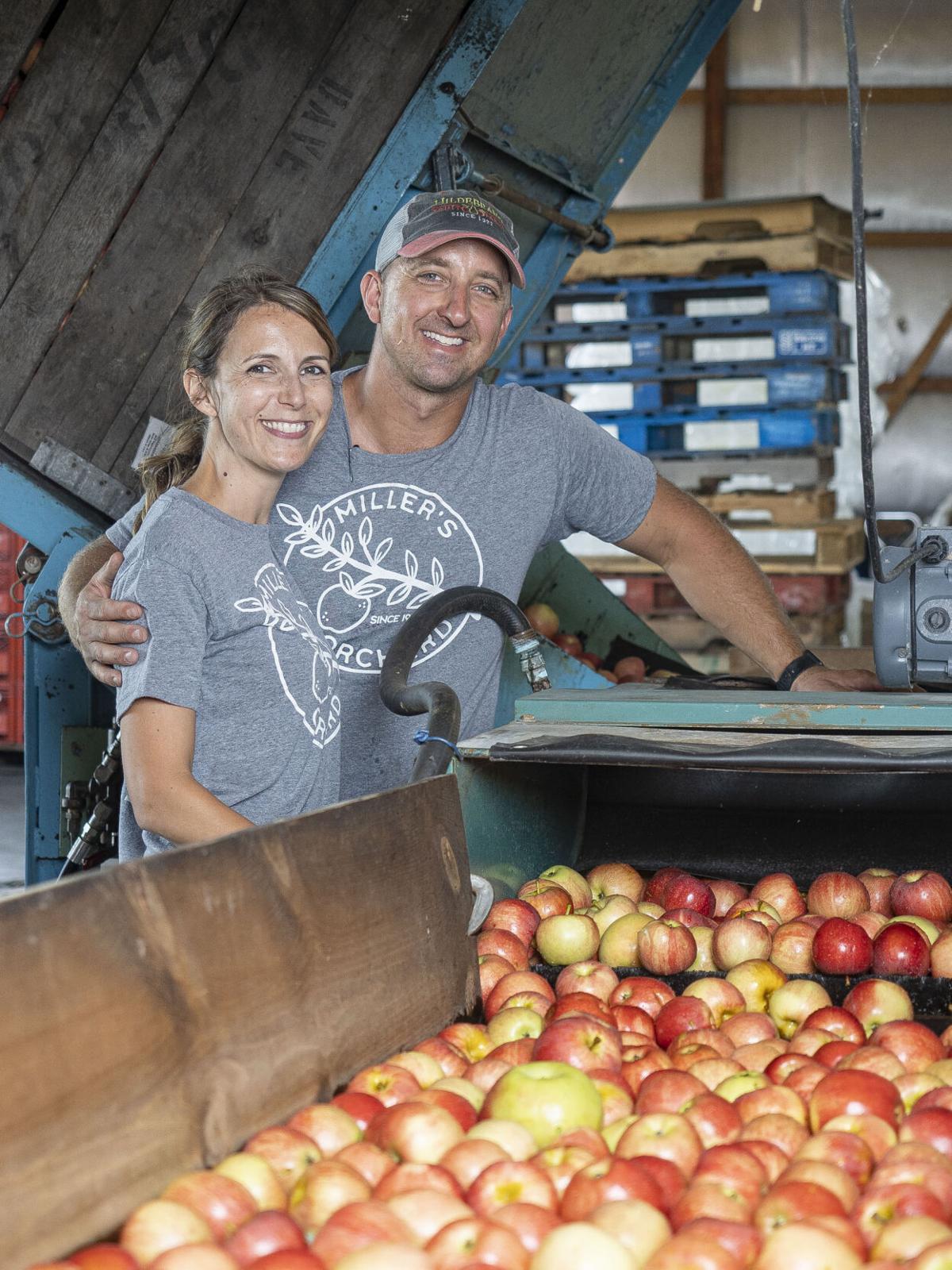 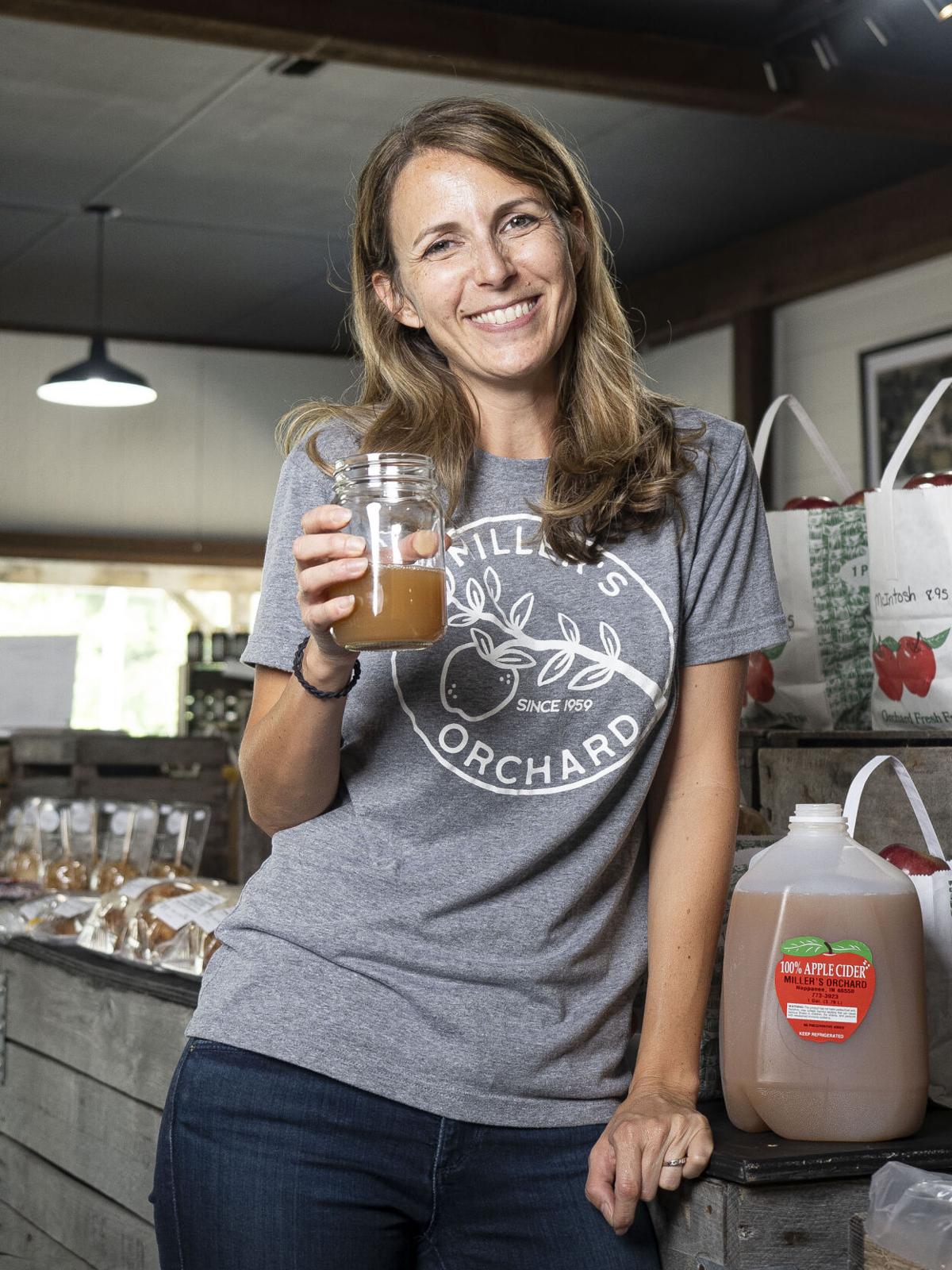 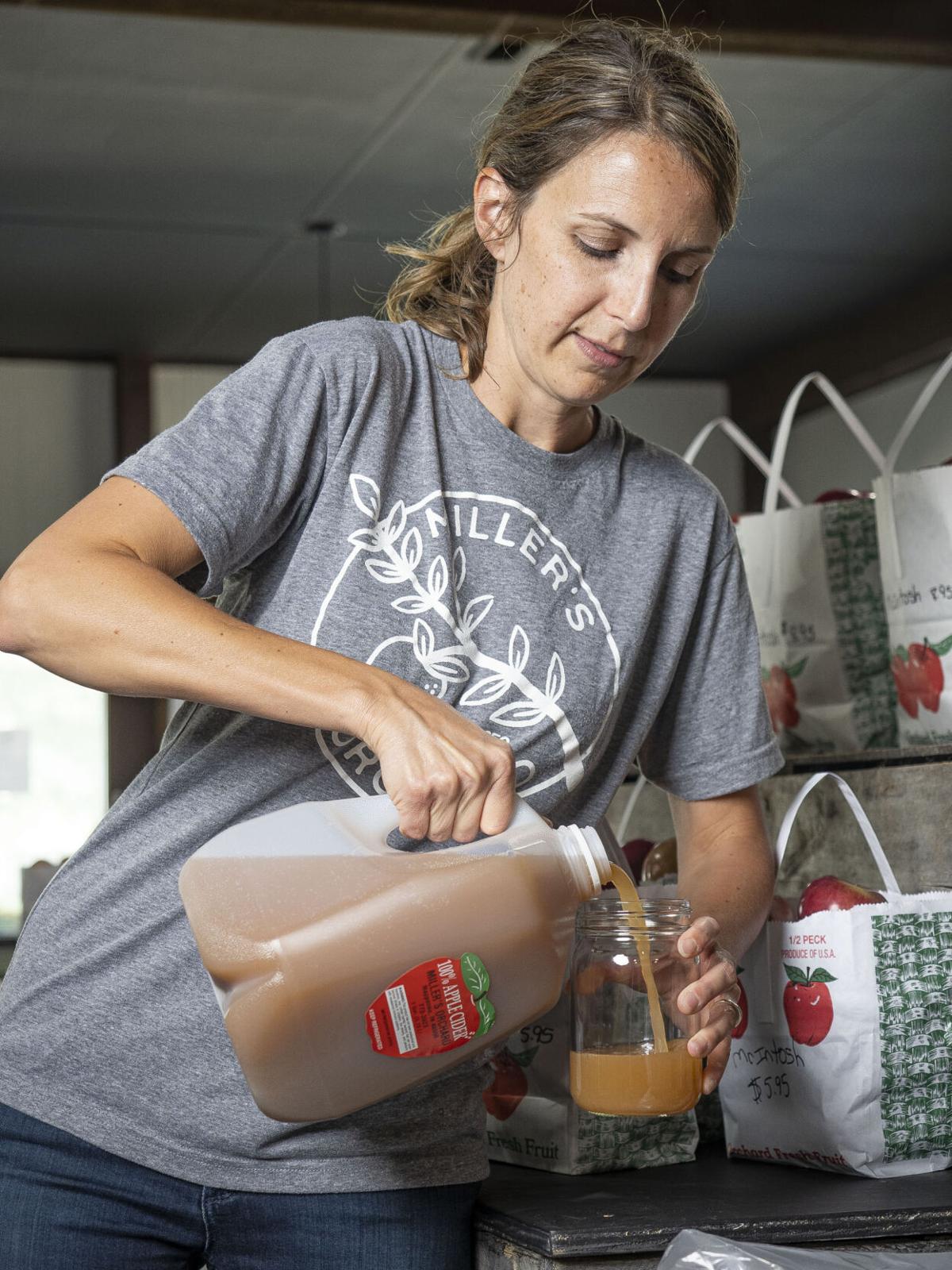 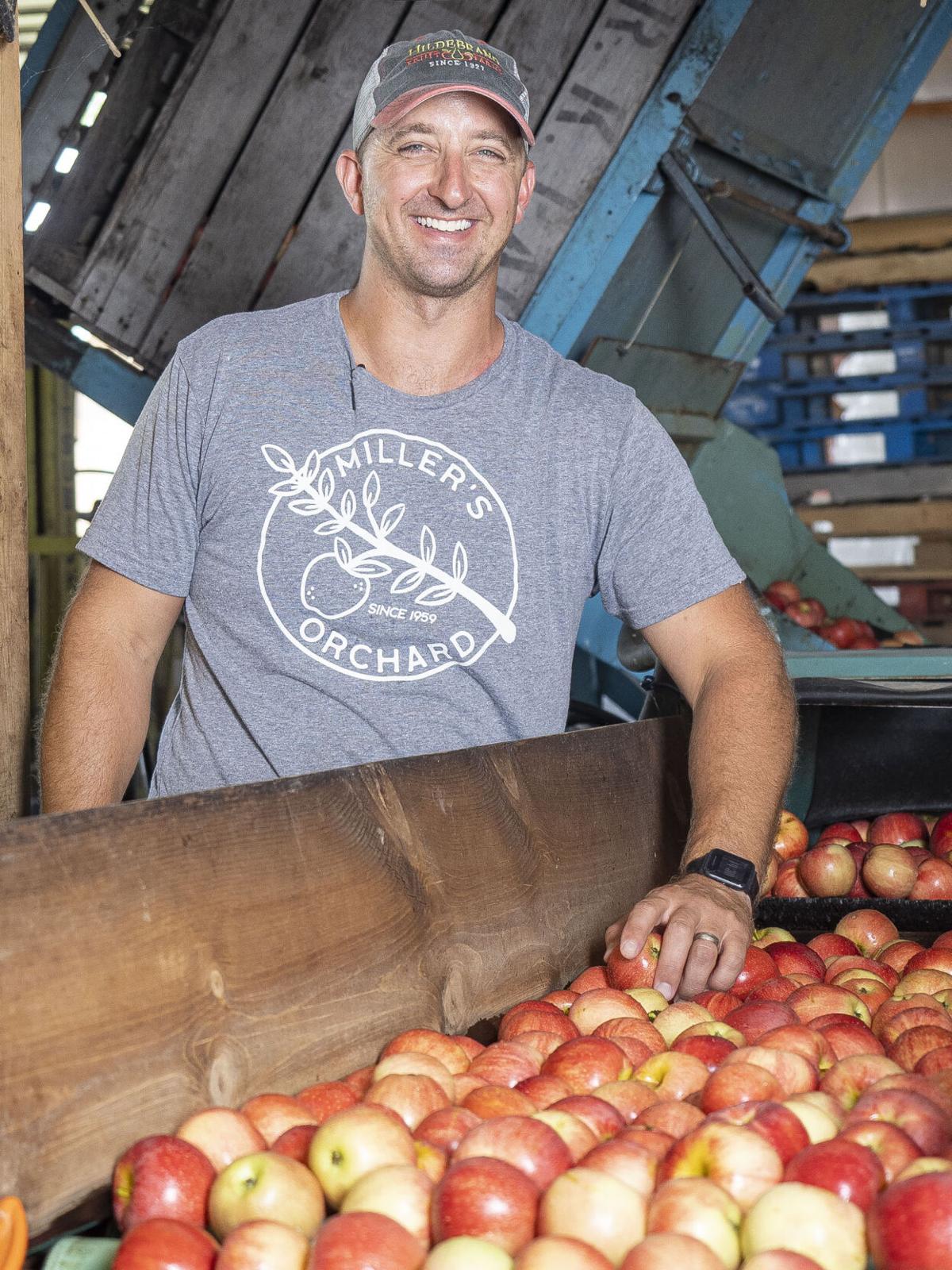 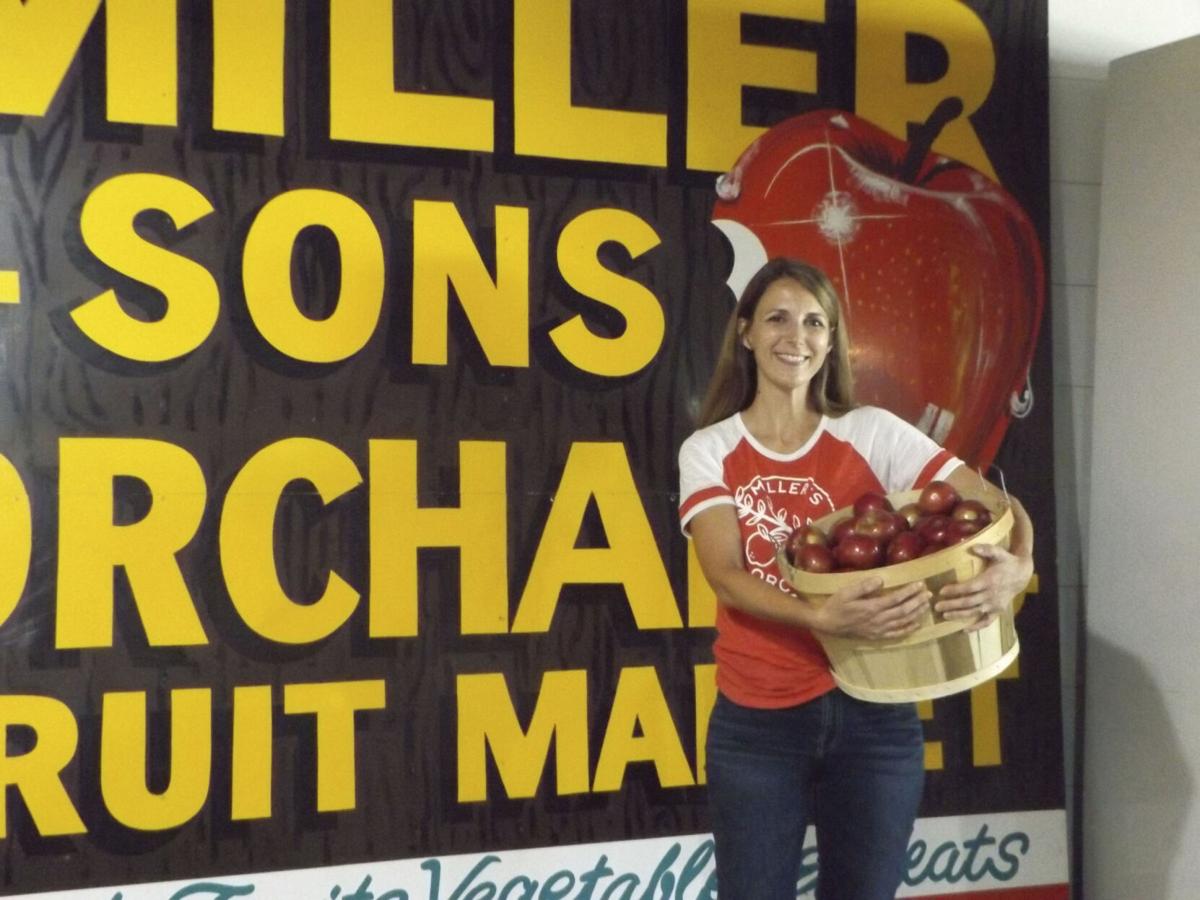 Nikki Beer stands in front of the sign from the days when her grandfather, father and uncle had the market and orchard. Nikki and her husband Jake reopened the market last September and are planning on replanting the orchard. 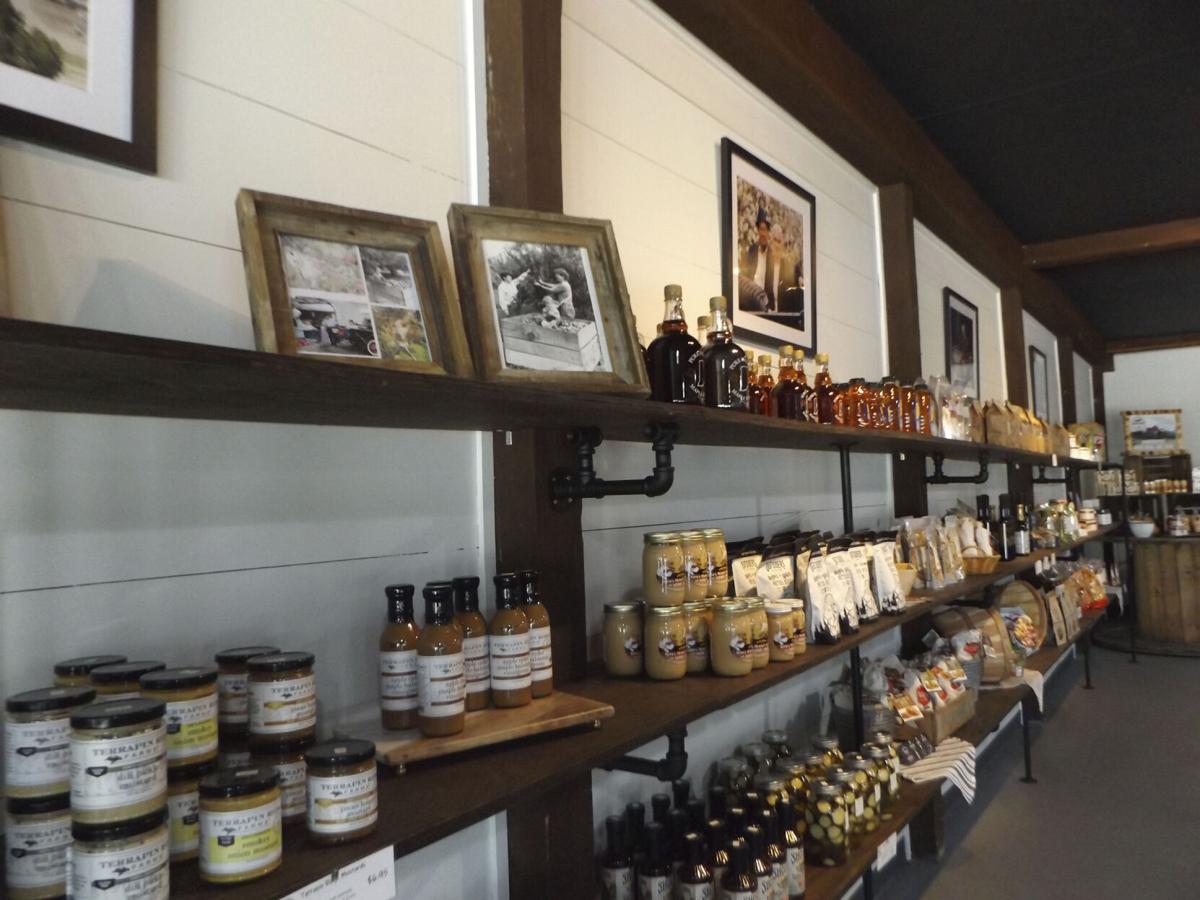 Some of the shelves of locally sourced products are shown at Miller’s Family Market in Nappanee with family photos displayed about the shelves. 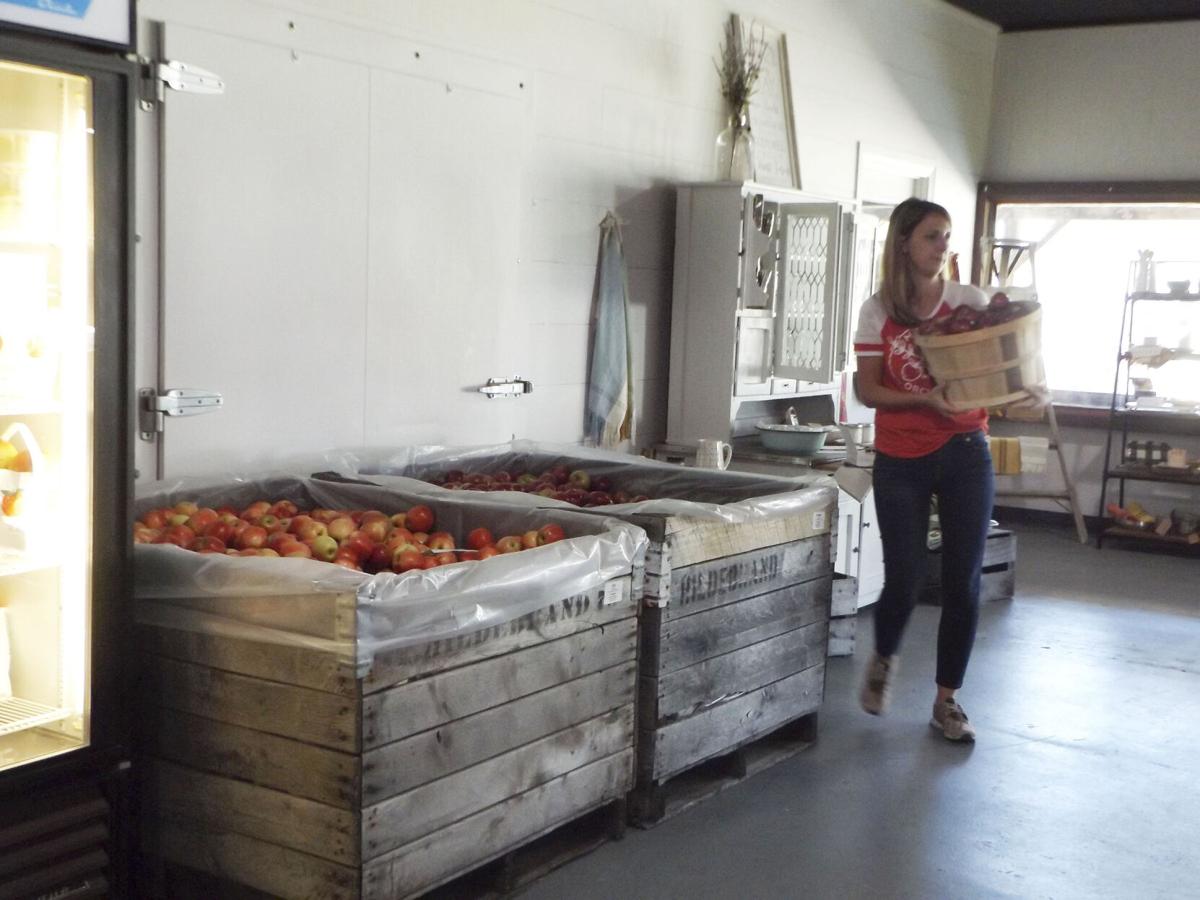 Nikki Beer, granddaughter of founders Harley and Mary Miller, carries a bushel of apples in the market that she and her husband Jake reopened last September. 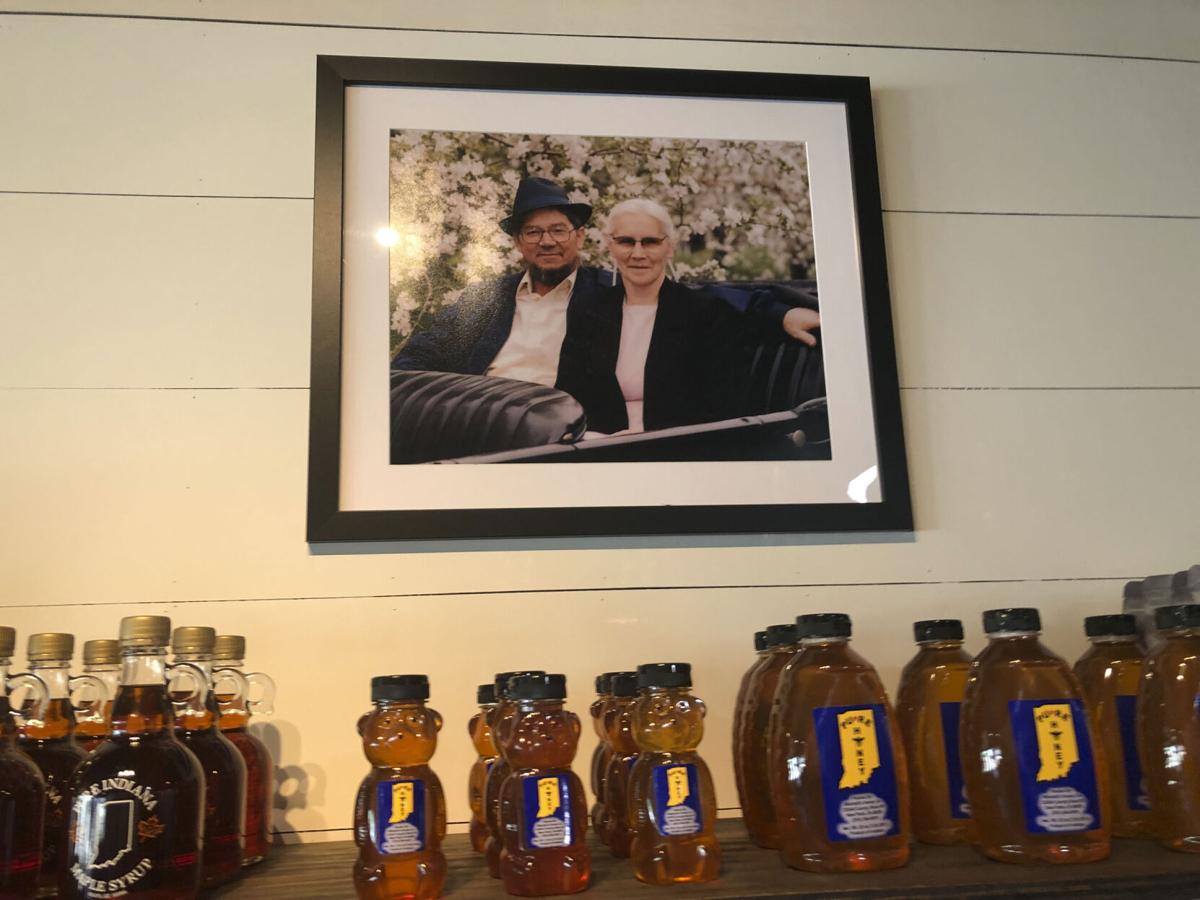 Founders of Miller’s Orchard, Harley and Mary Miller, are pictured above this display of honey, which once was produced by Jake Beer’s grandfather. 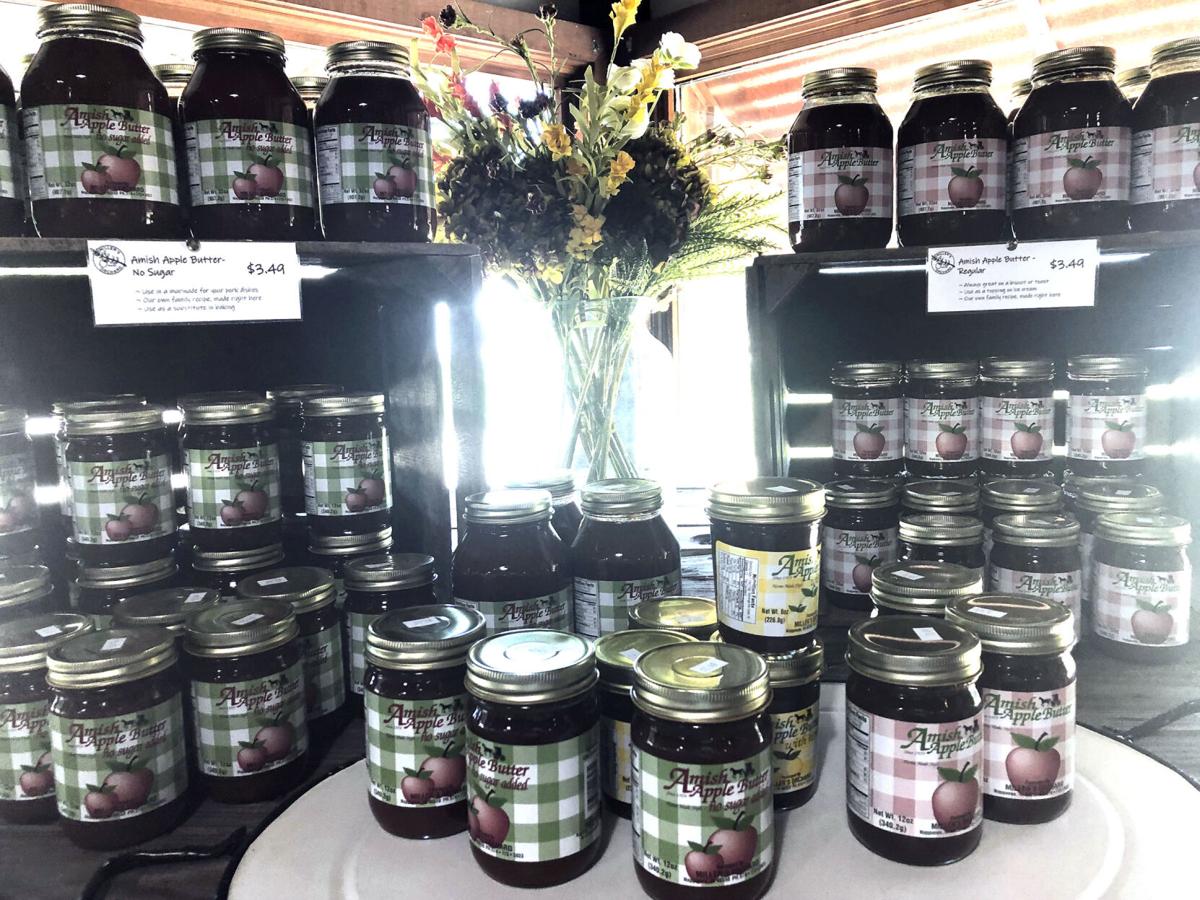 This display of Miller’s apple butter at Miller’s Family Market has been a family tradition for decades.

Nikki Beer stands in front of the sign from the days when her grandfather, father and uncle had the market and orchard. Nikki and her husband Jake reopened the market last September and are planning on replanting the orchard.

Some of the shelves of locally sourced products are shown at Miller’s Family Market in Nappanee with family photos displayed about the shelves.

Nikki Beer, granddaughter of founders Harley and Mary Miller, carries a bushel of apples in the market that she and her husband Jake reopened last September.

Founders of Miller’s Orchard, Harley and Mary Miller, are pictured above this display of honey, which once was produced by Jake Beer’s grandfather.

This display of Miller’s apple butter at Miller’s Family Market has been a family tradition for decades.

NAPPANEE — A seed of an idea planted at a funeral has come to fruition.

In 2008, while attending her grandma Mary Miller’s funeral, Nikki (Miller) Beer was reminded of how much her grandparents and their business, Miller’s Orchard, touched the lives of so many people and how much it meant to their family.

Miller’s, located at 501 W. Randolph St., was an iconic part of the Nappanee community and most would say the reason Nappanee has an apple festival. So there was a sadness when the orchards were sold off. Now a third generation of the family is resurrecting the Miller family legacy.

Beer and her husband Jake re-opened the market about a year ago and have plans to replant the apple orchard. Nikki is the daughter of Maynard and Tammy Miller and Maynard is the youngest son of founders Harley and Mary Miller. They opened Miller’s Orchard in 1958.

The couple had four children — Nelson, Marilyn, Lyle and Maynard. Beer said the apple orchard was actually planted in the 1930s and had changed ownership a couple of times before her grandparents bought it.

“There was no market then, no produce, no building — the footprint was different,” she said.

The Millers built the market to sell the apples and cider, but eventually they included more items. As the children grew up, Lyle moved to Fort Wayne and Nelson and Maynard got involved in the family business. It became Miller and Sons Orchard and Fruit Market. They began adding other produce and some of Mary’s recipes, including pies and potato salad.

Beer said her grandfather took care of the trees, Uncle Nelson made the cider and apple butter and her dad had the market from the 1970s until the late 1990s. At some point during that time her dad bought out her grandfather and Miller’s Market and Miller’s Orchard became two separate entities. By the time the market was closed, her grandfather had already sold off most of the orchard and a small salesroom moved to another building.

“This building had been vacant since the late 1990s,” she said.

When asked if she always wanted to revitalize the family business she shook her head. “Honestly, I was the girl who wanted to be on the first train out of here and never come back,” she laughed.

She and her husband Jake, also a Nappanee native, lived in Indianapolis for 10 years. They have two children, 8-year old Elijah and 6-year old Penelope.

Beer shared that her Grandma Mary died during Apple Festival weekend in 2008.

“Watching all the lives she poured into — I was so involved in her pouring into me as my grandma, I never really realized all the people she touched,” Beer said. “That’s when I realized it was never about the apples in the first place. The apples were just the vessel that brought people into the market. That was the moment the Lord used to bring me back here.”

Beer said that started a decades-long wrestling back and forth with her husband about whether they should move back and try to restart the orchard.

“It took a decade to get to that point,” she said.

They moved back seven years ago and said it didn’t work out to buy it then, “but the thought never went away,” she said.

Beer said when her family sold the rest of the orchard to Thomas Mast at the end of 2019, Thomas and Linda Mast called the Beers in for a meeting. Thomas said he’d heard that they wanted to have an orchard.

“It was an unbelievable moment,” she said. “Two people who barely knew us were willing to make an investment in us to get this up again and to breathe life into it — because it takes a lot.”

Beer said it’s been so rewarding to watch the faces of the customers.

“All the people coming in and reminiscing about how they used to come in with someone they love,” she said.

“I lived my whole life here but the memories of the people coming in here and reminiscing; that part’s been overwhelming to me,” she admitted, adding she never realized how much her family’s business meant to others.

People like Lavera Auer, who was shopping, said, “It brings back a lot of memories. I used to come here as a little girl. Now I really like that they’ve opened up and carry all these fresh choices.”

Beer said they opened up last year on Apple Festival weekend, even though there wasn’t a festival. “What better time?” she said with a shrug.

The rest of the family has been incredibly helpful, she said.

“When the matriarch and patriarch of a family die, families sometimes drift apart as they were the glue that held you all together,” Beer said. “One of the most beautiful things happened last year. We went to do the apple butter and Uncle Nelson was there and my husband and our son, all lined up. It was so incredible. I felt the spirit of my grandma. She wanted the family together.

“In that moment I thought, ‘This is why.’ We haven’t done a batch of apple butter yet without Nelson. He’s always here to help. My Aunt Marilyn drops in to see how we’re doing. These are the moments that are special.”

Beer said the family had a big pizza party at her grandmother’s house and they all reminisced. It was the first time all of the family had been together since she passed away.

Beer said they moved the market back to the original location so she could increase the product assortment they carry. She wants it to be a market that carries local goods from Indiana, Michigan and Illinois. She said the market has been developing in areas she hadn’t planned on.

“I kept getting asked if I’d carry Mary’s potato salad,” she said. “It’s her original recipe.”

Dutch Village Restaurant is making those items from her grandma’s recipes — scalloped potatoes and poppy seed chicken were two examples.

Beer asked Marilyn Hochstetler at Nappanee Bakery to make a special apple butter cookie that will be in soon and said she approached Wabash Donut about making apple cider donuts using their cider. She said at first they said no but after tasting the cider agreed to do so.

“It’s been fun to partner with these businesses, especially the locals here in town,” Beer said. “We lift each other up and create a neat bond.”

They carry honey with a family connection, too. After going through old orchard documents from the 1960s, the Beers discovered that her grandfather bought honey from Jake’s grandfather. When Grandpa Beer sold the business, he sold it to Ethan Mitchell where they’re now buying the honey from.

The market carries special apple-flavored popcorn from Dutch Kernel in Nappanee, local artisan cheese, local bouquets of flowers, Big Daddy Salsa, homemade guacamole from Goshen and more. Beer said as a grocer’s daughter she’s a foodie and is always on the lookout for unique food items locally made.

She shared that one of the favorite things she hears is when someone comes in and says “today’s applesauce day and the whole family’s getting together to make it.”

“To be a vessel to fuel that family tradition is touching,” she said.

Beer said part of the meeting with Mast was to determine how much room they’d need to be able to replant the orchard. She said they determined they’d need a minimum of 600 trees.

“We feel that’s just enough to be able to operate as a U-pick orchard so people can come and have an experience like they used to,” she said.

Once the trees are planted, Beer said it would take two to three years to produce fruit, and it would be five years before they could open as a U-pick. They plan to plant this April. She said a lot of people didn’t realize the previous orchard was an old-fashioned orchard with just red and gold delicious apples.

“There was no Fiji, no Gala, no Honeycrisp,” Beer said. So they are bringing in other varieties from another generations-long orchard and said that relationship is still intact.

“We’ve made so many friends and they’ve poured into us, advising us what varieties we should or shouldn’t plant,” she said. “It’s been a real help and a blessing.”

Beer said they won’t have an apple butter demonstration uptown this year because it’s their first year.

“We want to make sure the festival has enough cider,” she explained.

In the future, Beer would like Miller’s Market and the orchard to be a stop for the festival so they can create that educational aspect where visitors can learn how to make the cider and apple butter and U-pick but that will be several years down the road.

But they are planning what she called an “apple extravaganza” at the market for the Apple Festival weekend and their first anniversary. She said they’ll have lots of apples and they’ll be debuting some new products that weekend. For September, they’ll rolling out special baked goods and have partnered with Pretty Cakery, The Nappanee Bakery, Dutch Kernel and Dutch Village to make them.

Beer said while the rise in big box stores forced her dad to close the market, she feels things are changing and people want to know where their products are made and with the supply chain issues during COVID have appreciated local businesses more. She pointed out it’s the local businesses who support events like the Apple Festival.

“Jake and I are just overwhelmed by the kindness of others,” Beer said. “We couldn’t do this without my dad and his 40 years of experience in produce and marketing and displays or without Uncle Nelson standing beside us making sure we’re making the apple butter properly. We live in such a great community who’ve embraced us and we just ask that they’re patient with us as we rebuild.”