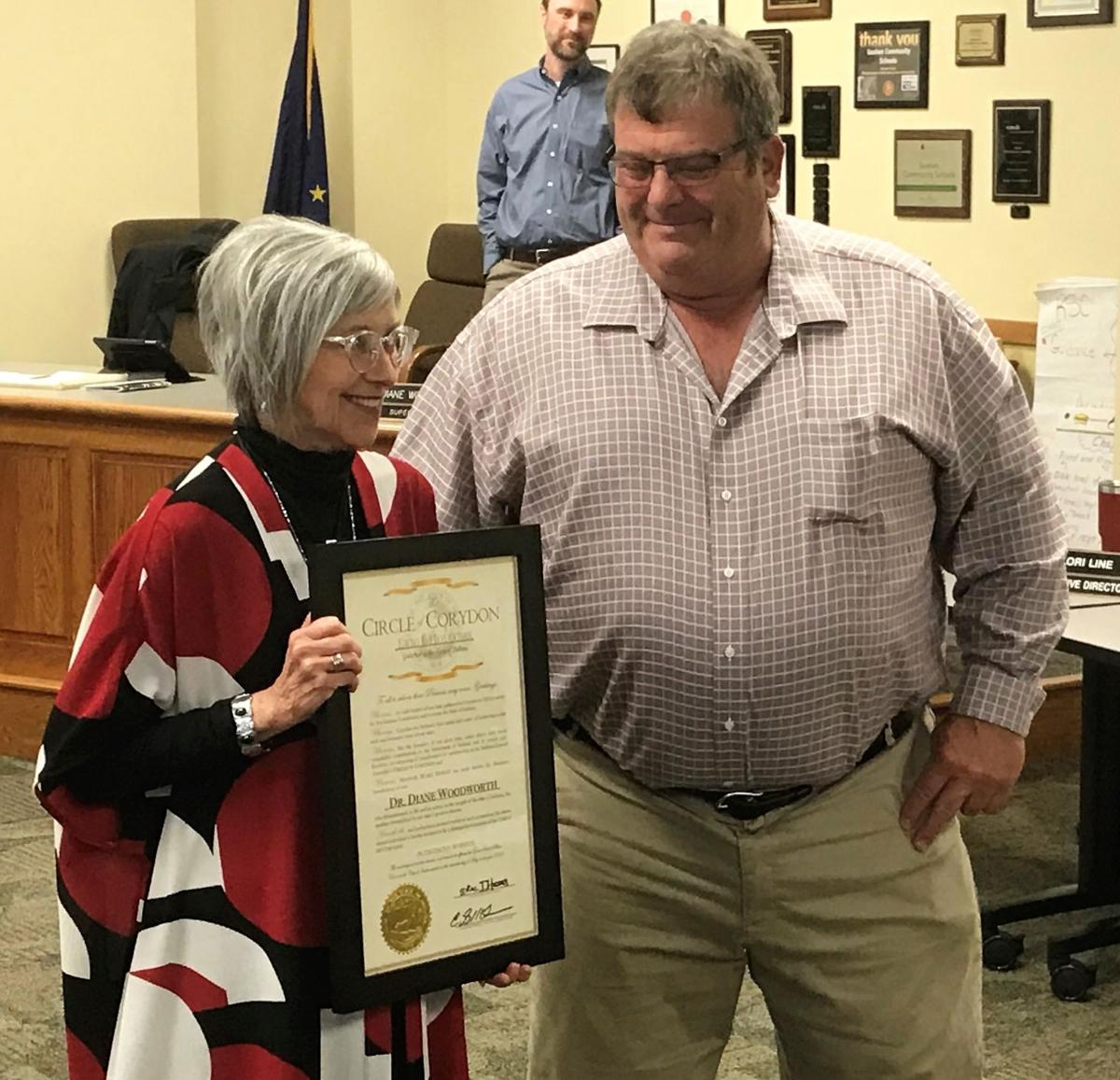 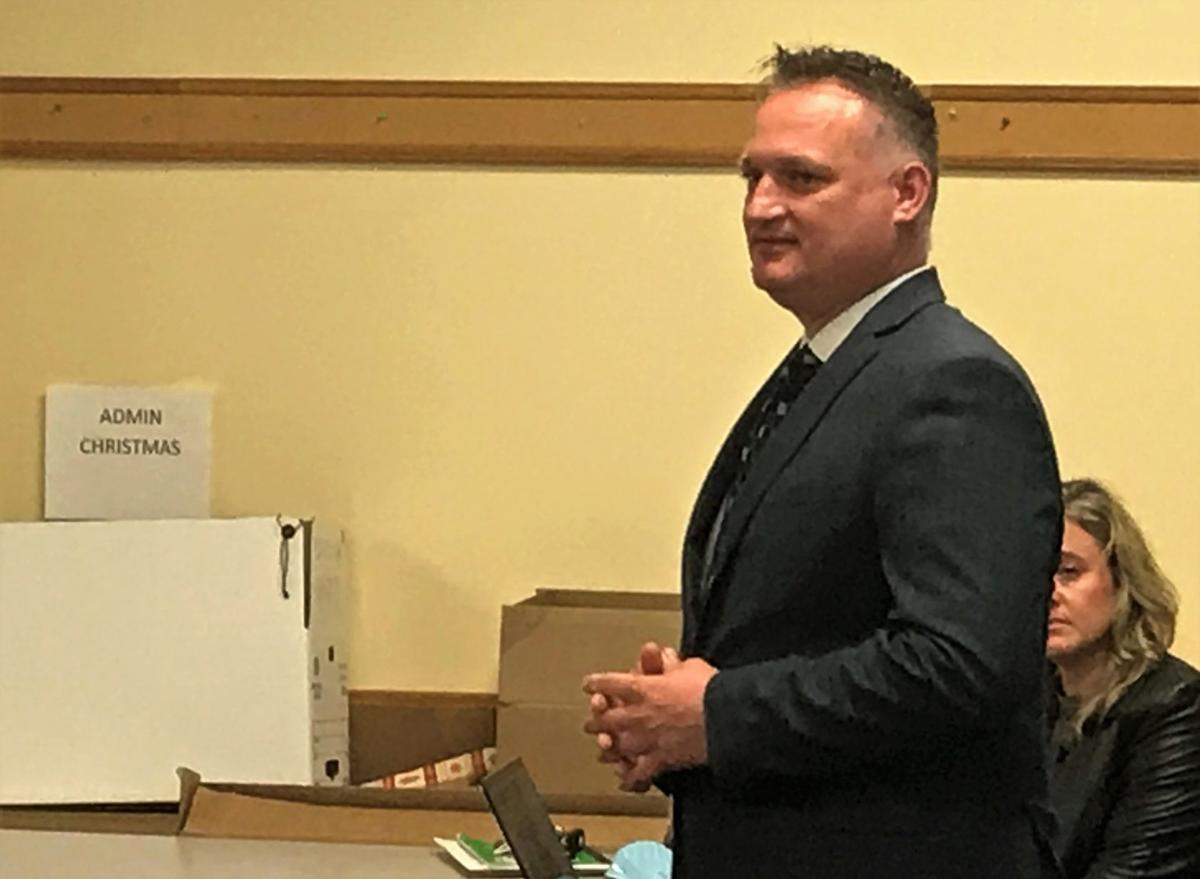 Matthew Johns thanks the Goshen school board for its support following his appointment as new director of the Elkhart County Special Education Cooperative Monday evening.

Matthew Johns thanks the Goshen school board for its support following his appointment as new director of the Elkhart County Special Education Cooperative Monday evening.

GOSHEN — Retiring Goshen Community Schools Superintendent Diane Woodworth was awarded a special honor during a meeting of the Goshen school board Monday evening.

Woodworth, who was hired to replace outgoing GCS Superintendent Bruce Stahly in 2012 after having served seven years with the school corporation in other administrative capacities, announced earlier this year she plans to retire as superintendent June 30.

In recognition of her many years of service to the Goshen community and beyond, Indiana Sen. Blake Doriot, R-Syracuse, surprised Woodworth Monday by announcing she was being honored with Indiana’s Circle of Corydon award.

“We talked about Diane leaving, and what could be done for her. So, I applied to the governor for a Circle of Corydon award. That’s a relatively new award that is given out by legislators,” Doriot said of Woodworth’s honor.

The award, established by Gov. Eric Holcomb in 2017, recognizes Hoosiers who have made remarkable contributions to the betterment of Indiana and its people, demonstrating through life and service qualities exemplified by the state’s greatest citizens.

Indiana General Assembly members can present two Circle of Corydon awards each year, which are jointly drafted by Holcomb and the state legislators making the nominations.

“Wow. Thank you so much. I knew something was going on!” Woodworth said after receiving her award, noting she realized something was up when she recognized several members of her family sitting in the audience at Monday’s meeting. “Oh my word. I am so surprised. Thank you!”

With more than 30 years in education under her belt, Woodworth taught math at Northridge High School for 17 years, served as principal at Westview High School for three years and spent time as a guidance counselor before beginning her service with Goshen Community Schools.

A graduate of Goshen College with a bachelor’s degree in math education, Woodworth received a master’s degree in guidance and counseling, as well as her principal’s license from Indiana University South Bend. She also holds a doctorate degree in educational leadership from Purdue University.

Woodworth is married to her husband, Todd, a former Spanish teacher and coach at Northridge High School. Together they have three children.

Also Monday, board members approved the appointment of Matthew Johns as director of the Elkhart County Special Education Cooperative.

Known as ECSEC, the special education cooperative has provided services to students ages 3 to 22 in six participating school corporations in Elkhart County since the late 1960s.

“It is my pleasure to introduce Mr. Matthew Johns. He interviewed with all of the participating districts in ECSEC — Baugo, Concord, Syracuse, Goshen, Middlebury and Wa-Nee. He was our unanimous choice,” said Steve Hope, deputy superintendent in charge of secondary education for GCS.

Johns is coming to GCS from the South Bend Community School Corp., where he has served as director of special education since late 2015.

“He is a tireless and endless advocate for students, especially those students with special needs,” Hope added of Johns. “So, we’re recommending you approve the appointment of Matthew Johns as the new ECSEC director.”

The board’s members agreed, and the appointment was approved unanimously.

Following the vote, Johns took a few moments to address the board regarding his new position.