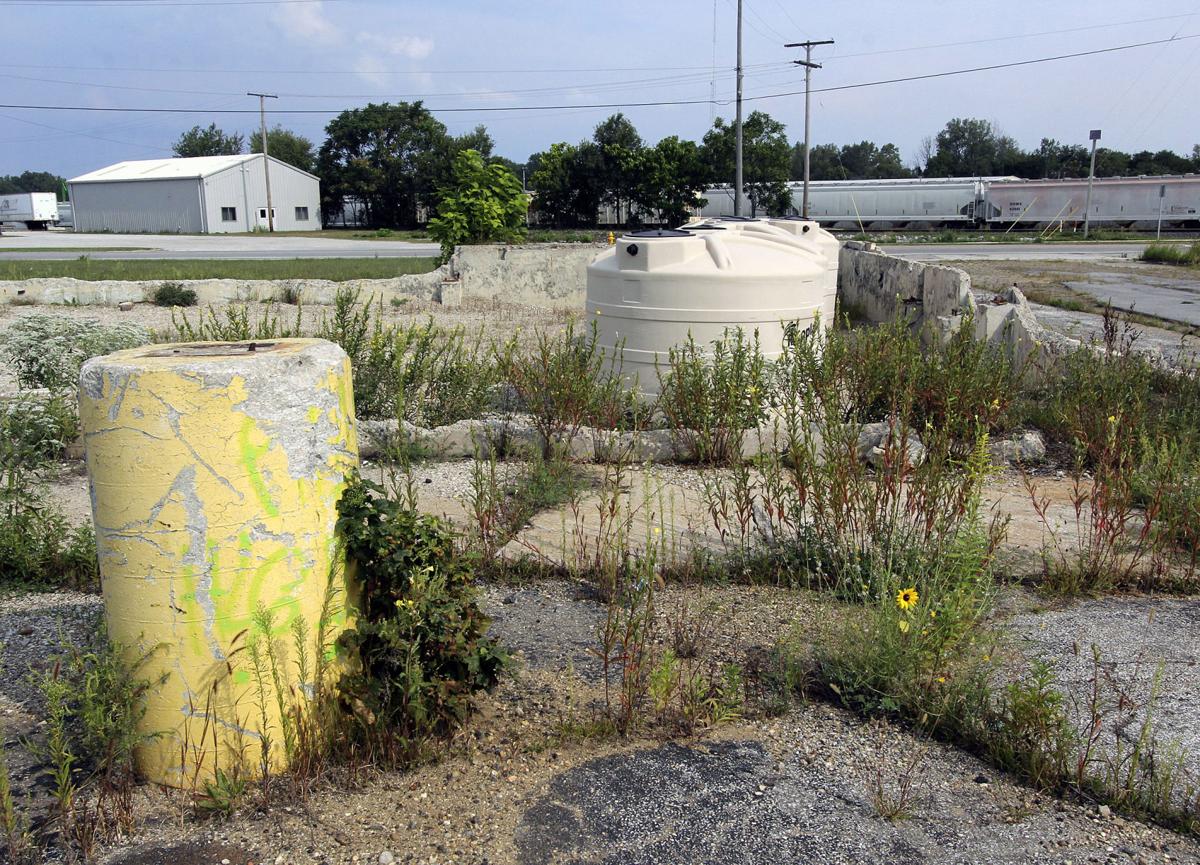 Weeds and wildflowers grown in the rubble that was once the Johnson Controls office building. Storage tanks from a previous cleanup effort are in the background. Neighbors of the former factory were presented with a plan Tuesday night for the continued cleaning of the site. 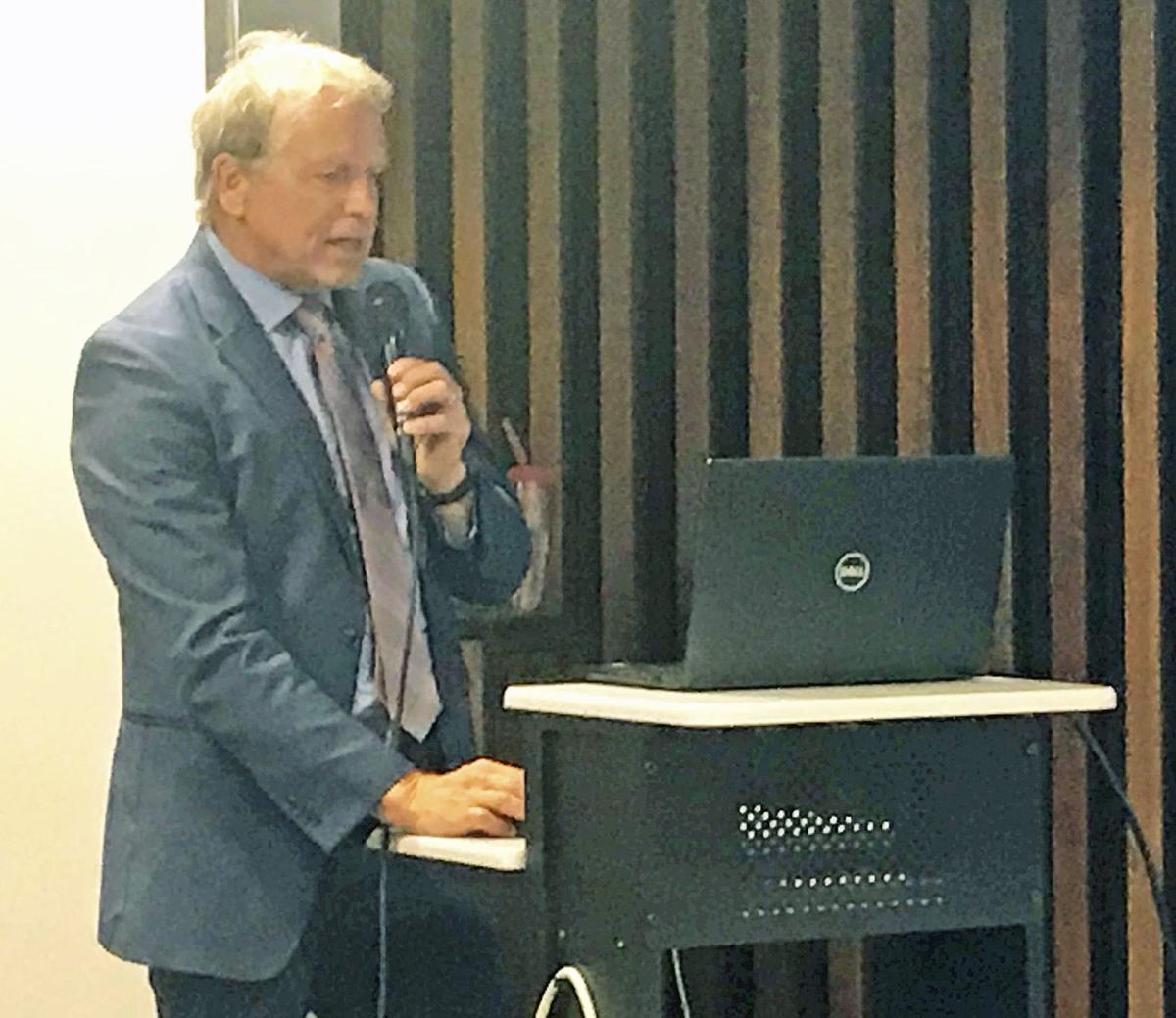 Weeds and wildflowers grown in the rubble that was once the Johnson Controls office building. Storage tanks from a previous cleanup effort are in the background. Neighbors of the former factory were presented with a plan Tuesday night for the continued cleaning of the site.

GOSHEN — More efforts to reduce groundwater contamination at the former Johnson Controls plant site and the escape of vapors from that contamination, will continue this fall and into next year.

A small group of concerned residents and community leaders gathered at the Goshen Public Library Tuesday evening for an update on the ongoing and planned environmental remediation work at the former Johnson Controls property at 1302 E. Monroe St.

Providing Tuesday’s update was John Osborne, principal hydrogeologist and senior vice president of GZA GeoEnvironmental Inc., the consulting firm that has been working with Johnson Controls on its groundwater pollution remediation efforts at the site.

According to the Indiana Department of Environmental Management, the 13.5-acre site was historically owned by the Penn Electric Switch Co., who in 1937 initiated construction of the site’s main facility and began manufacturing a variety of control devices as a supplier to other equipment manufacturers.

Penn’s component manufacturing eventually included operational devices for the heating and air-conditioning industry, including Johnson Controls Inc., which lead to JCI’s acquisition of Penn in the early 1970s.

Johnson Controls operated the factory until 2007, when it sold the property to TOCON Holdings, the site’s current owner. TOCON briefly operated a gel coating and fiberglassing plant at the site until going out of business shortly after the recession hit in 2008.

According to Osborne, both Penn and Johnson Controls had used a common industrial chemical called trichloroethylene (TCE) to degrease metal parts at the facility. The chemical, the use of which was discontinued in 1998, has since been characterized as carcinogenic to humans by all routes of exposure by the U.S. Environmental Protection Agency.

Back in 1991, Osborne noted that Johnson Controls discovered TCE contamination in soil and groundwater at the plant property, and in 1992 the company traced the TCE to groundwater flowing off-site to the west.

According to IDEM, the department approved a Remediation Work Plan (RWP) for the Johnson Controls property in November of 2001 in response to the environmental contamination findings. In addition, Osborne explained that Johnson Controls entered into IDEM’s newly-created Voluntary Remediation Program, or VRP, in 1996, and has been working with the department on an ongoing basis to investigate and remediate the contamination at the site.

According to Osborne, Johnson Controls recently volunteered to conduct additional remediation work at the site at the behest of GZA, and thus IDEM required a revised RWP to be created.

The need for that revised RWP, according to IDEM, was due to the fact that while prior remediation efforts have taken place at the site in past years, chlorinated volatile organic compounds exceeding permitted levels for drinking water and vapor intrusion have continued to travel off-site.

As such, IDEM has been working with Johnson Controls to complete a revised RWP which builds upon previous remediation measures implemented at the site.

According to Andrew Skroback, senior counsel with the law firm Norton Rose Fulbright, who has been working with Johnson Controls throughout the remediation process, IDEM gave GZA its initial technical approval of the revised RWP last summer before putting the plan out for public comment.

According to Osborne, Johnson Controls has spent approximately $15 million to reduce the environmental contamination levels at the site since 1991.

Such work, he said, has included, but is not limited to: installation of more than 50 wells to monitor groundwater conditions twice a year; hundreds of soil borings to investigate soil conditions; removal of contaminated soils from the site; operation of a “pump and treat” system on and off the site to clean groundwater; treatment of soils at the site with EZVI, or emulsified zero valent iron; and the testing of 44 buildings to investigate the possibility of vapor intrusion and determine whether ventilation is needed.

Of the 15 buildings that required vapor mitigation systems, Osborne said venting system maintenance is ongoing, and includes twice-yearly inspections, sampling every two years, ongoing confirmation of pressure and replacement of fans and systems, and payment of the electricity needed to run the systems.

As for the buildings determined not to need ventilation systems, Osborne said sampling continues at those buildings every two years just to make sure vapors do not become an issue down the line.

In addition, Osborne noted that new work to reduce on and off site groundwater contamination began in 2017, and Johnson Controls continues to evaluate progress and sufficiency of proposed remedies in consultation with IDEM.

In discussing the basic components of the plan, Osborne began first with soil contamination at the site.

According to Osborne, JCI plans to begin removing the building slabs, remaining concrete and paved areas at the site beginning this fall. Once that is completed, the company will begin looking for additional “hot spots” in soils, if any, and treat them beginning in the spring of 2020, with the ultimate goal of creating green space by covering the site with new soil and planting grass.

Moving on to vapors, Osborne said the company will continue operation and maintenance of the vapor mitigation systems at the site with the goal of eventually being able to eliminate the need for such systems through lowered contaminant concentrations in groundwater. Also currently being explored by the company, Osborne said, is the use of naturally-occurring bacteria in the groundwater to transform TCE into the harmless end product, ethlene, through a process known as anaerobic reductive dechlorination.

Speaking specifically to groundwater contamination at the site, Osborne noted that in 2017, Johnson Controls began a pilot test consisting of ERD, or enhanced reductive dechlorination, injections along several sections of the property, the results of which showed significant results in reducing TCE concentrations in the test areas.

According to Osborne, groundwater flows west through these treatment walls, carrying the ERD remedy through neighborhood groundwater, and the results have been promising.

Moving on to the next steps planned by the company in addition to the ongoing ERD treatments, Osborne noted that the company plans to:

• Continue monitoring and maintenance of vapor mitigation systems until contaminant concentrations are lowered sufficiently, with the goal being to eliminate the need for such systems altogether;

• Place clean soil over the site, seed and establish grass surface beginning in the spring of 2020;

• Sample groundwater and report to IDEM twice a year — on and off site for at least the next 10 years;

• Establish engineering and institutional controls such as prohibiting the use of groundwater for drinking and notification of IDEM if the site is to be redeveloped;

• Monitor groundwater for progress toward meeting remedial objectives, and, based on monitoring results, recharge the ERD treatment walls as necessary to maintain ERD conditions;

• Complete any additional remediation work determined to be necessary in collaboration with IDEM; and

• Document achievement of remedial objectives and request closure of the site from IDEM.

“This right now is on a nice course for kind of what IDEM and we like to see in progress toward cleanup,” Osborne said in concluding his update Tuesday. “So that is our summary of the site.”

Before IDEM can sign off on the revised pollution remediation plan for the former Johnson Controls site in Goshen, the plan must first go through a period of additional public comment.

As part of that process, IDEM will be accepting public comments on the revised plan through Sept. 19.

GOSHEN — An updated environmental remediation plan has been created for the former Johnson Controls property on the city’s southeast side, and…