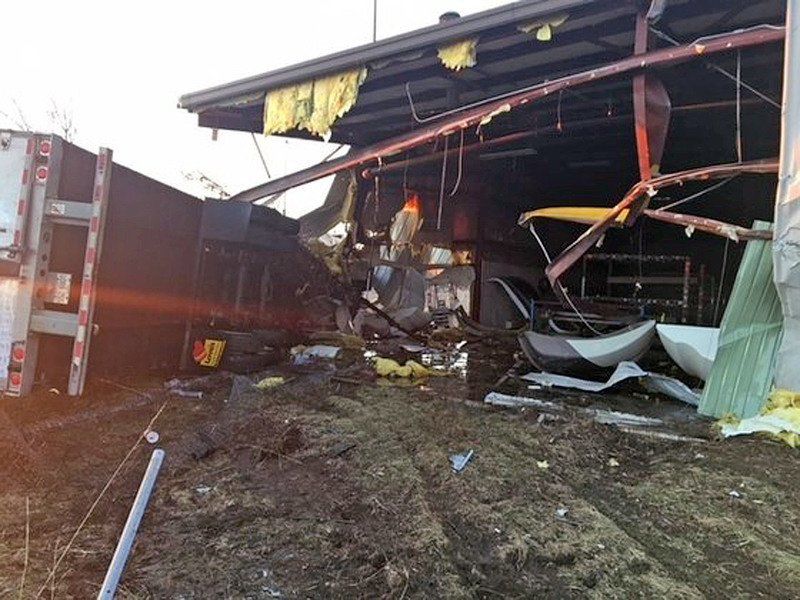 Photo contributedThe trailer portion of a tractor-trailer juts from what's left of a building that the vehicle plowed through Monday morning. The building is owned by Altec Engineering, 2950 Gateway Drive. 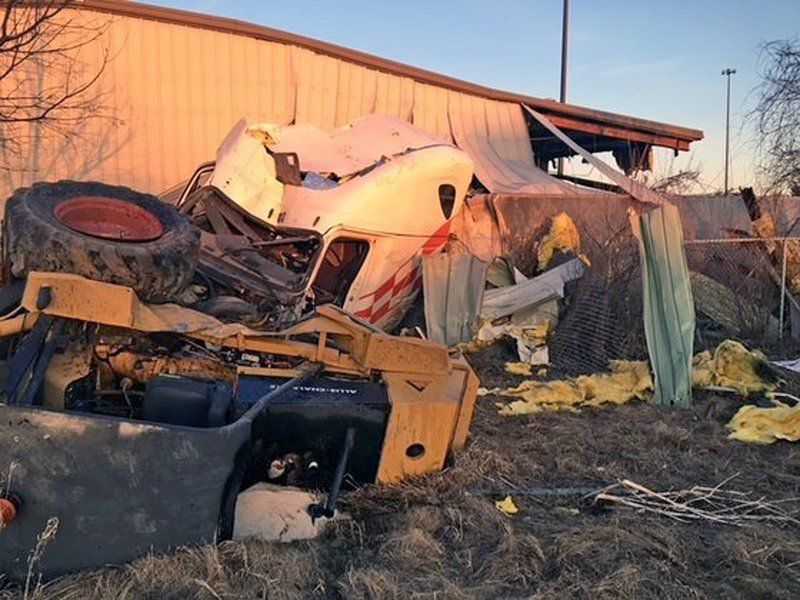 Photo contributedThe cab of a tractor-trailer pokes through a building owned by Altec Engineering at 2950 Gateway Drive, Elkhart, after the truck plowed through it Monday morning after the rig struck an abandoned pickup on an entrance ramp to the Indiana Toll Road.

Photo contributedThe trailer portion of a tractor-trailer juts from what's left of a building that the vehicle plowed through Monday morning. The building is owned by Altec Engineering, 2950 Gateway Drive.

Photo contributedThe cab of a tractor-trailer pokes through a building owned by Altec Engineering at 2950 Gateway Drive, Elkhart, after the truck plowed through it Monday morning after the rig struck an abandoned pickup on an entrance ramp to the Indiana Toll Road.

A tractor-trailer driver survived a crash, and nobody else was injured, after the vehicle plowed through a building near the Indiana Toll Road in Elkhart Monday morning.

The driver, Kazmierez Kisiel, of Westfield, Massachusetts, crashed into an abandoned pickup truck on the entry ramp to the closed service plaza near mile-marker 90 on the Toll Road. Kisiel’s Freightliner tractor-trailer kept going, driving through a ditch and a fence before slamming into a building operated by Altec Engineering at 2950 Gateway Drive around 7:15 a.m., the Indiana State Police said.

A couple walls of the building were shredded, a forklift was toppled and the tractor-trailer overturned, photos provided by police show.

Firefighters pulled Kisiel from the vehicle and took him to Elkhart General Hospital where he received treatment for minor injuries. No workers in the building were injured, police said.

Police are investigating what led to the crash.

Ronald Knauss, 57, Bristol, died at Witmer Lake near Wolcottville over the weekend.

Firefighters from the Johnson Township Fire Department found Knauss about 30 yards from an overturned anchored canoe on the lake’s southeast corner Sunday, Indiana conservation officers said in a news release Monday. Witnesses said they saw Knauss fishing in the lake earlier in the day.

The cause of death remains under investigation, conservation officer said.

• Erick Burton, 45, 1775 Westplains Drive, Goshen, was arrested by Goshen police and jailed on charges of domestic battery, intimidation, criminal confinement and interference with the reporting of a crime following a fight at a home in the 1700 block of West Plains Drive around 6 p.m. Sunday. The victim complained of pain, but had no visible injuries, police said.

• Sarah White, 25, and Jasmine Tabler, 19, both of 1708 S. Sixth St., Elkhart, were arrested by Goshen police on a charge of theft at Walmart, 4024 Elkhart Road, around 3:30 p.m. Sunday. The two women were then released with citations to appear in court, according to a police report.

• Avido Lucas, 22, 309 W. Central Ave., LaGrange, was arrested by LaGrange County police and jailed on a charge of driving a vehicle without a license following a traffic stop on U.S. 20 and C.R. 900 East in LaGrange County Friday.

• Goshen police arrested a 16-year-old boy on a charge of possession of marijuana in a parking lot at 1213 W. Lincoln Ave. around 7:15 a.m. Sunday. The boy was later released to his mother with a citation to appear in court, according to a police report.

• Goshen police arrested a boy after his mother reported him as incorrigible for leaving home without permission and stealing a watch in the 2000 block of Alpine Fir Lane around 4 p.m. Saturday. The boy was released back to his mother.

• Dakota Lewallen, Goshen, reported to Goshen police his Jeep Cherokee was stolen from a home, 1310 Cedarbrook Court, sometime between Saturday morning and Sunday.

• Elkhart County police found a stolen trailer after being called to check the vehicle’s identification number at Timberbrook Mobile Home Park, 54686 C.R. 19, in Bristol around 10:15 a.m. Friday. The trailer was stolen from Elkhart, police said in a report.

Elkhart County police located a vehicle that was involved in a shooting in Syracuse after a man reported to police the vehicle was in his driveway in the 15000 block of South County Line Road in Syracuse around 7:30 a.m. Sunday. The vehicle was released to the Syracuse Police Department, police said.

Leonard Miller, Goshen, reported to Goshen police a hit-and-run crash in the 500 block of Lincolnway East around 4:30 p.m. Sunday.

• A discarded cigarette caused a fire at a house, 1666 W. Franklin St., in Elkhart Sunday.

Elkhart firefighters were called to the home around 1 p.m. Sunday. The fire was brought under control in about 20 minutes, according to a news release from the Elkhart Fire Department.

The fire damaged the rear exterior of the building and burned some of the area inside the back door, the department said. Nobody was injured.

• Fire damaged a fence and the rear of a detached garage at a house, 506 Sherman St., in Elkhart Sunday.

Firefighters brought the blaze under control around 2:10 p.m. after receiving a call about 20-minutes earlier, a news release from the Elkhart Fire Department shows.

A fire from burning wood and brush on a neighboring property apparently spread to the fence and garage, the fire department said.

A power outage put much of the Middlebury area in the dark for a little over an hour and a half early Monday morning.

The outage affected about 2,500 customers when it started around 4:50 a.m. Electricity was restored around 6:15 a.m., a NIPSCO representative said.

Crews were still working to learn the exact cause of the situation as of 11 a.m. Monday.