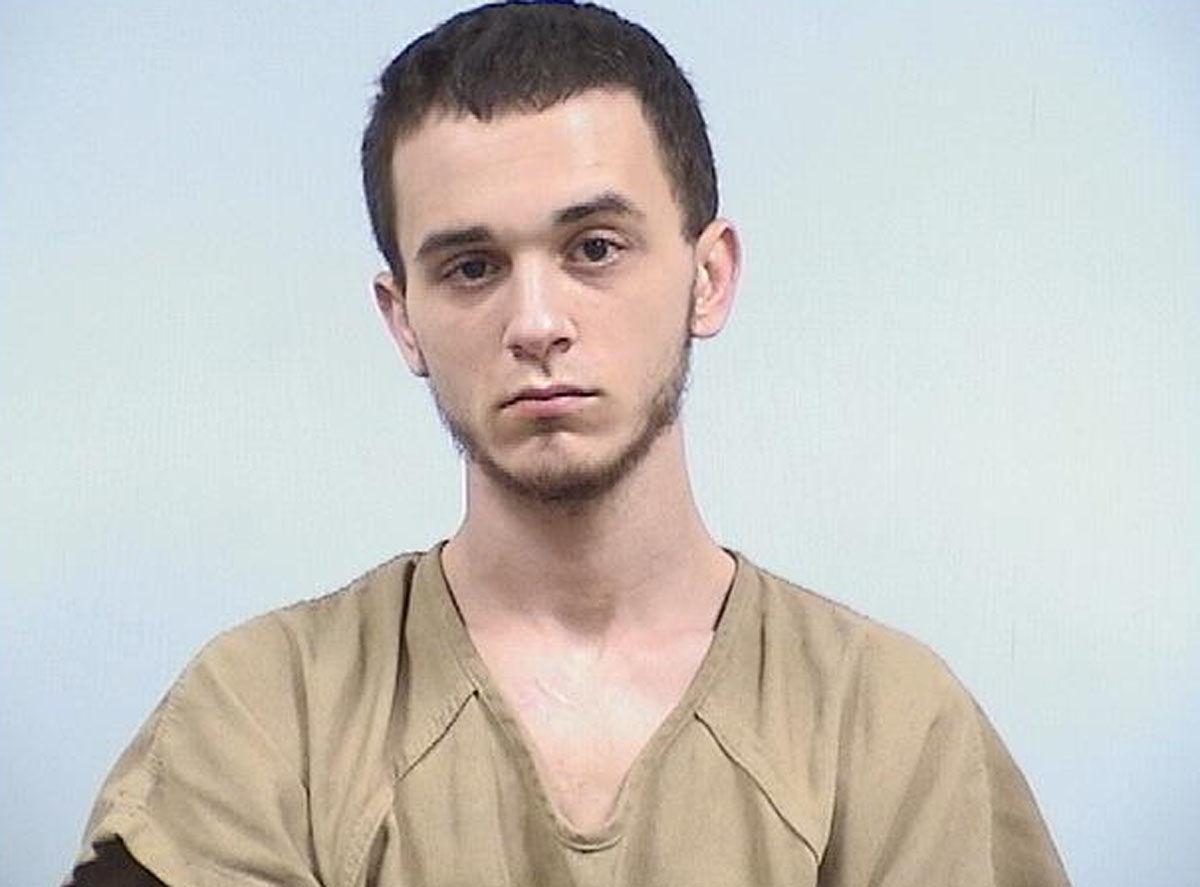 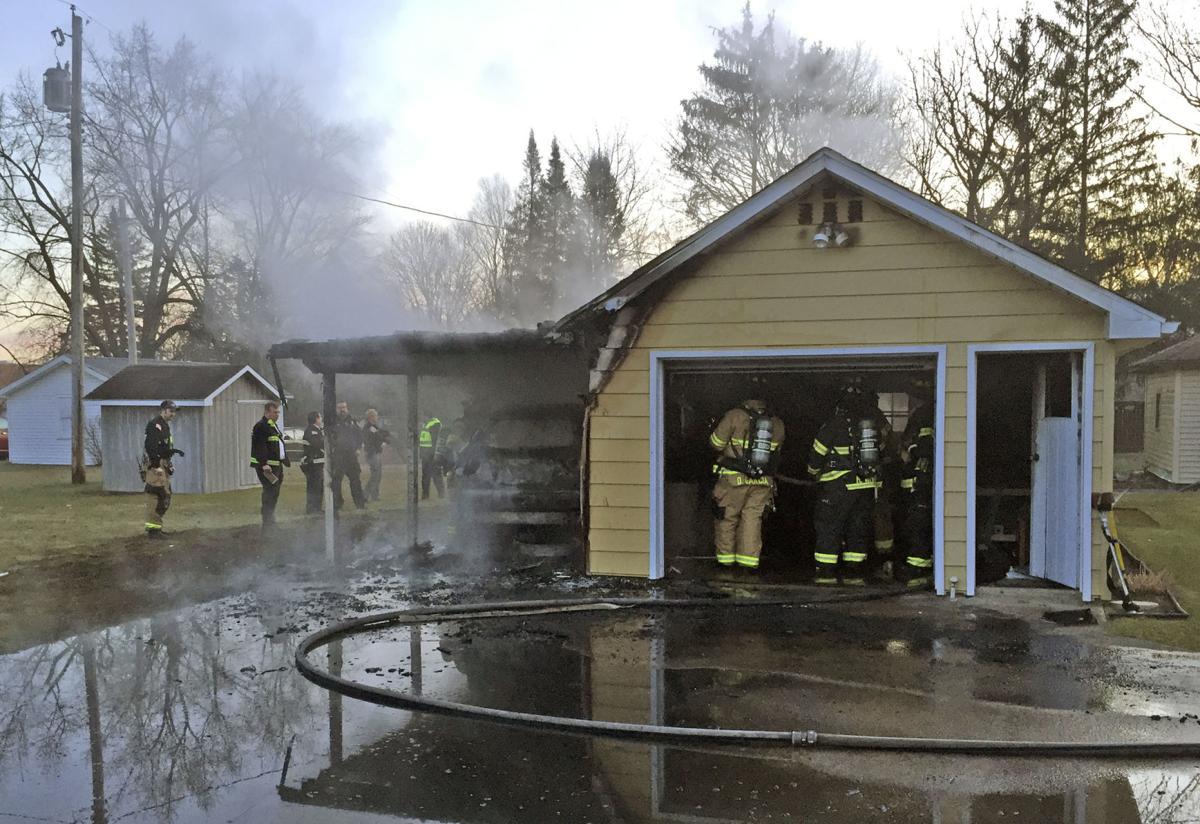 Goshen firefighters work to extinguish the remaining hot spots during a garage fire at 1107 Baker Ave. Tuesday morning. A suspect allegedly parked a stolen vehicle in the carport and set it on fire.

Goshen firefighters work to extinguish the remaining hot spots during a garage fire at 1107 Baker Ave. Tuesday morning. A suspect allegedly parked a stolen vehicle in the carport and set it on fire.

An Elkhart man reportedly admitted he had a propane torch for smoking methamphetamine with him in a stolen vehicle that caught fire at a Goshen woman’s home Tuesday. The fire was one incident in an alleged one-man crime spree that included a burglary at a business in Dunlap and the theft of another vehicle.

Joshua Craigo, 20, faces burglary, theft and resisting arrest charges. He was taken into custody after he tried to elude Goshen police by swimming across the Elkhart River near Linway Plaza.

Under questioning, Craigo told a detective he first pried open a door to break into the Legendary Ink tattoo parlor, 23631 U.S. 33, then stole cash early Tuesday morning, the probable cause affidavit in the case shows.

The business was hit around 1 a.m., about three-and-a-half hours after a burglary attempt at that address was reported, Elkhart County police reports show. In the earlier attempt, a storage shed had been broken into and drywall was cut open to get into the business, but an alarm thwarted the suspect, reports show.

Craigo then told the detective he was high and “just wandered around the area” after the burglary. Hours later, around 7 a.m., he found an SUV running and unlocked at Christopher Decker’s home, 58768 Chase Trail, in the River Manor subdivision. While Craigo told police he didn’t intend to steal a vehicle, he drove off in the SUV toward Goshen, the affidavit and police reports show.

On a GoFundMe page, Decker said his wife was warming her SUV up in their driveway when it was stolen.

Craigo then allegedly ditched the SUV under a carport at a home, 1107 Baker Ave. — he apparently left it there randomly — where the vehicle caught fire around 7:40 a.m. The vehicle was destroyed and the house was damaged.

Suspect arrested in vehicle thefts; one burned the other was found

GOSHEN — An Elkhart man, suspected of torching a stolen vehicle and then stealing a Jeep in Goshen, found himself confronted by a victim deter…

Craigo told police the fire wasn’t intentionally set, speculating a cigarette he smoked could have caused the fire. When asked about a propane torch that was found in the vehicle, he admitted to the detective he used the torch to smoke meth, but denied he used it to start the fire, the affidavit shows.

Craigo also admitted he tossed an iPhone out of the SUV. The device was found in the Baker Avenue area, the affidavit shows. Decker said the phone was burned beyond recovery on the GoFundMe page.

As police and firefighters responded to the blaze, Craigo admitted he took a Jeep Wrangler belonging to Jason Sharp while it was running and unlocked at Sharp’s home nearby, 311 S. Indiana Ave. He claimed he had permission to take the vehicle, which the detective indicates was a lie, and then drove it around Shanklin Park, striking a telephone pole in the process, the affidavit shows.

Sharp reported the theft while police were at the fire scene. He found Craigo at Shanklin Park later in the day, saying on Facebook he used his nephew’s car to block the entrance. As Craigo approached him, Sharp wrote he shouted at him to stop and drew a gun, but Craigo then jumped a curb and drove back toward the river.

Craigo was taken into custody and treated at Goshen Hospital before he underwent questioning.

• Ronald Hershberger, 59, 113 S. 29th St., Goshen, was arrested by Goshen police and jailed on charges of driving with a suspended license and resisting arrest following a traffic stop in the 2000 block of East Lincoln Avenue around 9:30 p.m. Wednesday.

• Timothy Poertner, 31, Garrett, was arrested by LaGrange County police and jailed on a charge of driving without a license following a traffic stop on C.R. 450 East near C.R. 450 South around 9:15 p.m. Wednesday. Poertner was also cited for speeding and failing to yield to an emergency vehicle, police said.

• Kristi Miller, 29, 907 Zollinger Road, Goshen, was arrested by Goshen police on a charge of possession of marijuana following a traffic stop at North Ninth and Cross streets around 1:15 p.m. Wednesday.

• Erika Camacho-Vergara, 28, Sturgis, Michigan, was arrested by LaGrange County police and jailed on a charge of driving without a license following a traffic stop at 6505 N. Ind. 9 around 1:30 a.m. Wednesday.

Harold Buck, Goshen, reported to Goshen police his pickup truck was damaged while it was parked at Menards, 1925 Lincolnway East, around 4 p.m. Wednesday.

Goshen police reported finding graffiti on the Northside Neighborhood sign in the 100 block of Mill Street around 5:45 p.m. Wednesday.

Staff at Kohl’s reported to Goshen police Wednesday a theft from the store, 3802 Midway Road, that occurred Dec. 3.