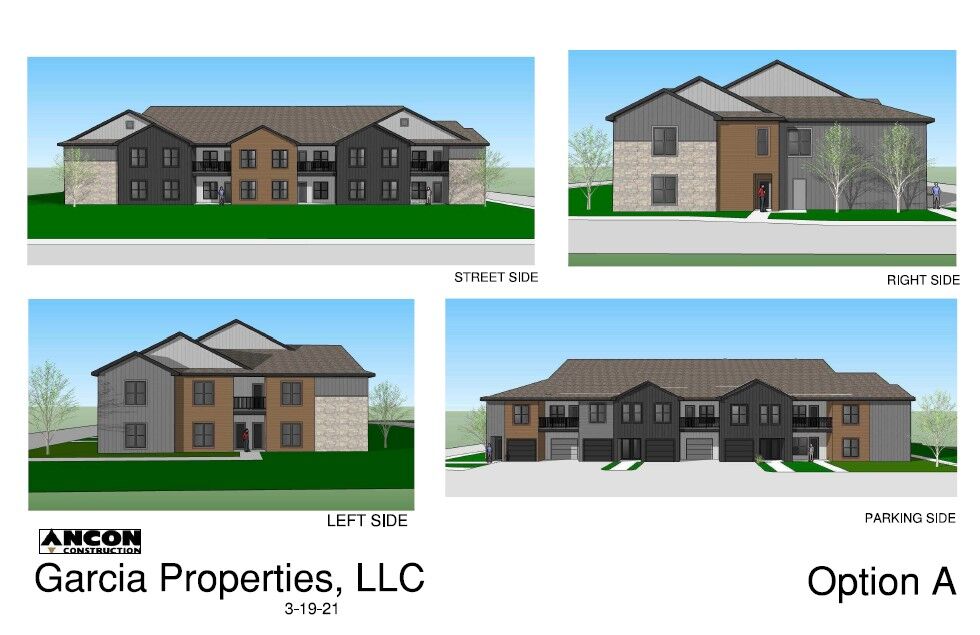 This provided rendering shows some examples of what the buildings of a proposed new 60-unit apartment complex planned for the northeast corner of the intersection of Indiana and Plymouth avenues on the city’s southwest side might look like. 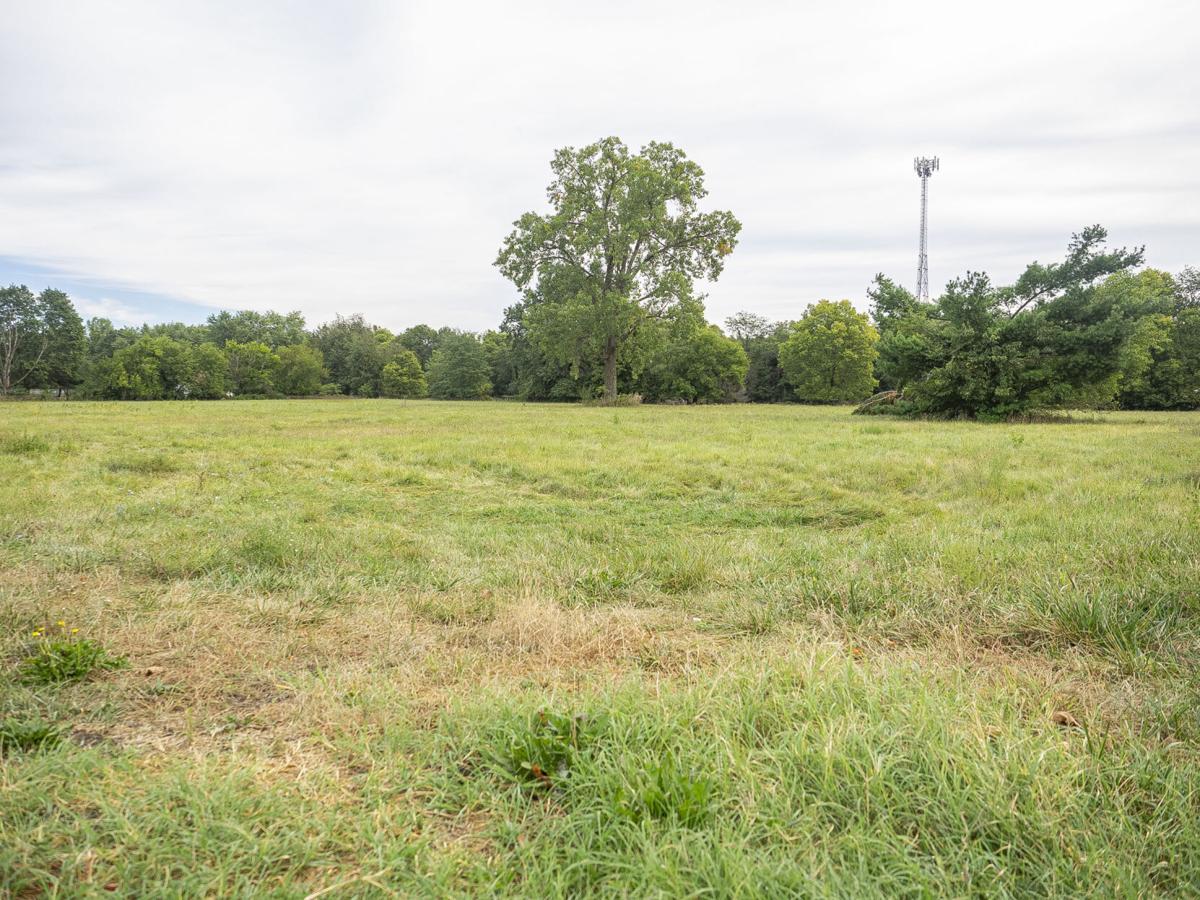 This undeveloped site, located on the northeast corner of the intersection of Indiana and Plymouth avenues on the city’s southwest side, is the proposed location of a new 60-unit apartment complex.

This provided rendering shows some examples of what the buildings of a proposed new 60-unit apartment complex planned for the northeast corner of the intersection of Indiana and Plymouth avenues on the city’s southwest side might look like.

This undeveloped site, located on the northeast corner of the intersection of Indiana and Plymouth avenues on the city’s southwest side, is the proposed location of a new 60-unit apartment complex.

GOSHEN — Goshen Redevelopment Commission members Tuesday approved a financing agreement with the developers of a new 60-unit apartment complex planned for the city’s southwest side which the developers say is needed in order to move the project forward.

Central to the agreement is Greenwood Rental Properties LLC, a Goshen-based development company led by local business owner Mayra Garcia. The company purchased property at the northeast corner of Plymouth and Indiana avenues back in early 2020 with plans to construct a 48-unit apartment complex at the site.

In late 2020, the developers decided to bump up the scale of the plan after purchasing additional land at the site, increasing their proposal to 90 units.

However, according to Goshen Redevelopment Project Manager Becky Hutsell, keeping the project financially stable in recent months has proved to be a struggle for the developers, particularly as construction costs have increased substantially.

As such, she noted Tuesday that the developers and their general contractor have been working to reduce the overall cost of the project, and are currently proposing construction of a 60-unit market-rate apartment complex at a cost of $11.5 million.

Yet even with rents set at the high end of the market rate, Hutsell noted that the complex under the current proposal would not be able to generate enough revenue to meet commercial lending standards, thus putting the commercial loan needed by the developers to construct the complex in jeopardy.

In an effort to keep the project moving forward, is was suggested that a financing agreement with the commission involving the use of a TIF/EDC bond to cover the financial gap might be an option.

“This is a new concept for the Redevelopment Commission to partake in residential projects,” Hutsell said. “However, there is a housing shortage in Goshen.”

According to Hutsell, such bonds have been used by a number of Indiana communities to provide gap funding for multi-family residential projects, and commission members back in September of 2021 voted to allow city staff to begin negotiations with Greenwood Rental Properties LLC regarding the issuance of such a bond.

It was that financing agreement that was finalized and approved by the commission Tuesday.

Under the approved agreement, the commission will create a new tax increment finance district allocation area for the specific site of the apartment complex. The city will then sell a TIF/EDC bond to Greenwood Rental Properties LLC, the proceeds of which will be used to finance a portion of the development project.

Once the bond has been sold, the developers agree to repay the bond over a 20-year period, at no interest, through a promissory note. The commission in turn will pledge 75% of the TIF revenues generated by the project to repayment of the bond, while the remaining 25% will be retained by the commission for future projects within the immediate area.

According to accounting firm Bakery Tilly, the estimated tax increment that will be generated by the new TIF allocation area over the course of the 20-year bond agreement comes to about $2.2 million, which will allow the project to meet commercial lending criteria.

In addition, the developers have agreed to guarantee that 20% of the dwelling units within the development will be reserved for essential workers — first responders, health care workers and teachers — with the understanding that if available units are not occupied by an essential worker within 30 days from vacancy, they can be offered to other potential tenants.

NOT ALL ON BOARD

While discussing the proposed agreement Tuesday, commission member Brian Garber said he personally would like to see at least 5% of the project’s available rental units be reserved for low- to medium-income tenants, given that the city is currently experiencing a significant shortage of all types of housing options, not just market rate.

In responding to that suggestion, Goshen Mayor Jeremy Stutsman, who is a major supporter of the project, noted that he’d be all for such a suggestion, but only if it didn’t negatively impact the prospects of the overall project.

“This one is pretty last minute,” Stutsman said of Garber’s suggestion. “It’s not that I disagree with it, like I said, but it is very last minute for the project.”

Commission president Vince Turner offered a similar sentiment, noting that while he wouldn’t be opposed to having such conversations for future projects, he didn’t feel such a suggestion was the right fit for the Greenwood project.

“We have discussed this,” Turner said. “And it’s going to be discussed more at City Council, and I like having that as kind of a backstop to consider more of what we have here. That’s one of the reasons that we’re set up the way we are, that the City Council can ask more questions, and dive a little deeper. But given what is almost an emergency situation that we have for housing in our community, I think it’s important that we move forward.”

Commission member Andrea Johnson said the fact that the project’s developers and contractors are local made her feel better about the project, though should would like to see suggestions such as Garber’s considered for future projects.

“The fact that this is all local, that these are local developers, and these are local companies, that means a lot to me,” Johnson said. “So, I will support the project with the understanding that I would like that to be considered in the future.”

For his part, commission member Brett Weddell reiterated his belief that allowing the bond issuance to proceed would set a bad precedent resulting in the city bailing out developers who find they don’t have the wherewithal to pay 100% of their project costs.

In the end, a slim majority of the commission’s members came down on the side of approval, and a motion to approve the financing agreement with Greenwood Rental Properties LLC was passed in a vote of 3-2 in favor.