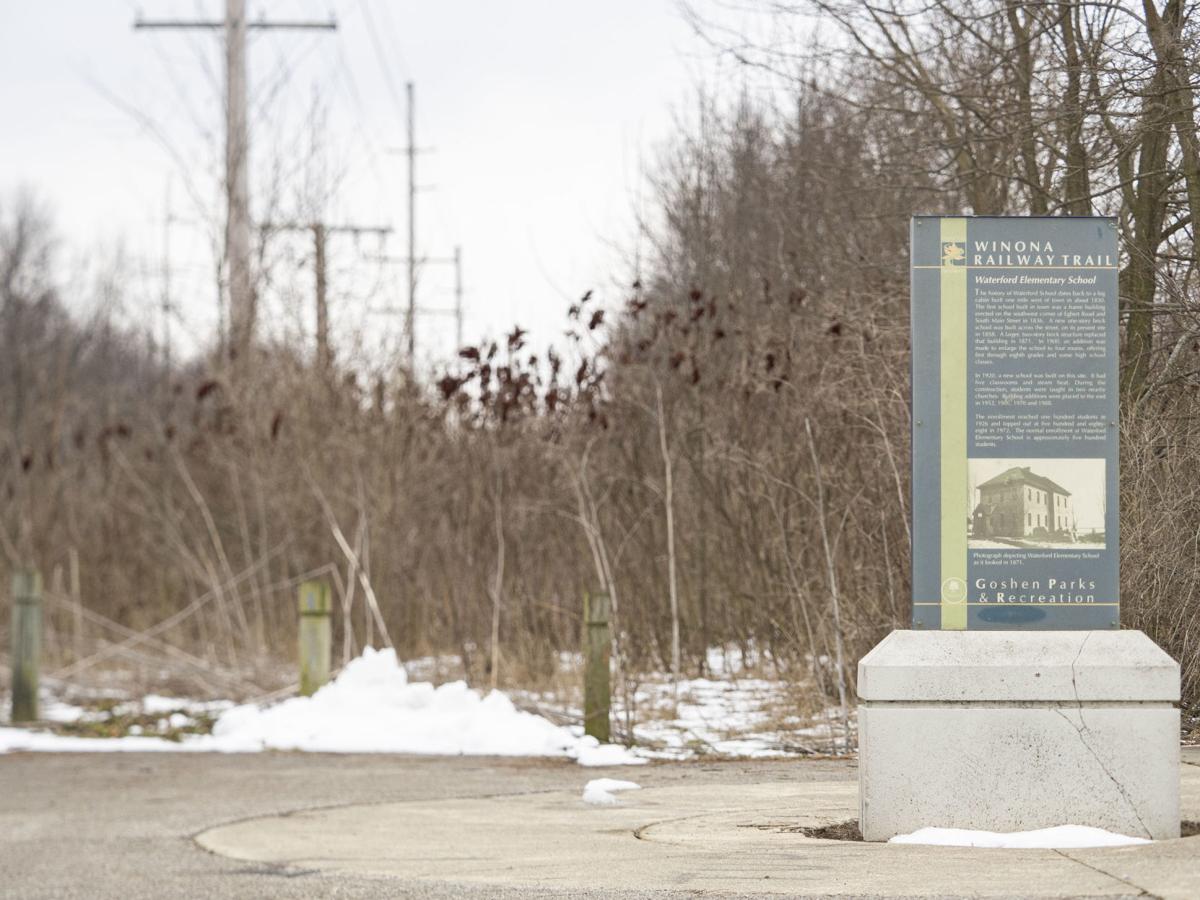 Plans for an extension of the Winona Railway Trail, which currently ends just prior to Waterford Elementary School on the city’s south side, got the initial go-ahead from Goshen Redevelopment Commission members during their meeting Tuesday afternoon. 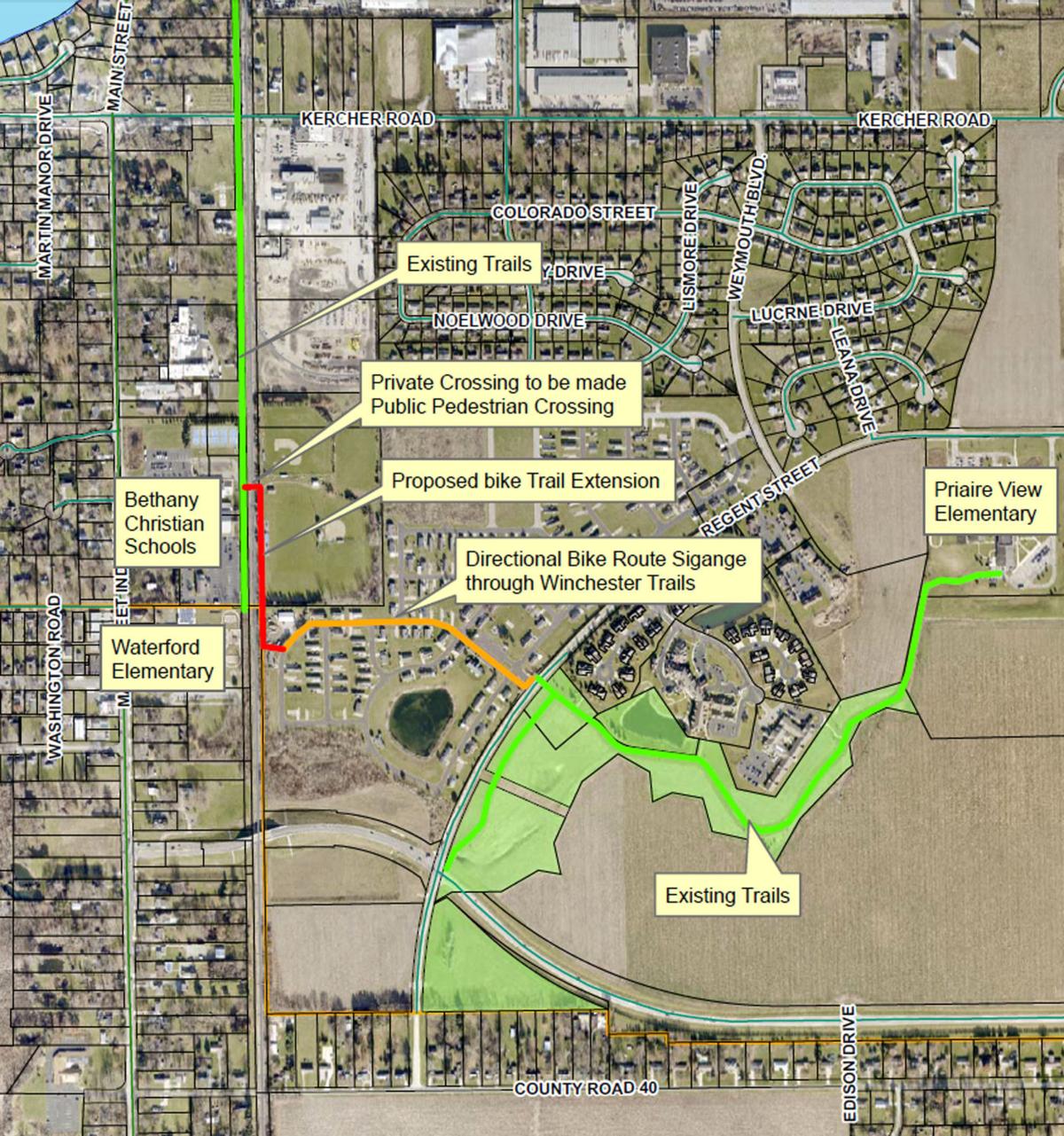 This provided map shows the location of a planned extension of the Winona Railway Trail, outlined in red, the design of which received initial approval Tuesday by the Goshen Redevelopment Commission.

Plans for an extension of the Winona Railway Trail, which currently ends just prior to Waterford Elementary School on the city’s south side, got the initial go-ahead from Goshen Redevelopment Commission members during their meeting Tuesday afternoon.

This provided map shows the location of a planned extension of the Winona Railway Trail, outlined in red, the design of which received initial approval Tuesday by the Goshen Redevelopment Commission.

GOSHEN — Plans for an extension of the Winona Railway Trail on the city’s south side got their initial start Tuesday during a meeting of the Goshen Redevelopment Commission.

At the meeting, commission members approved a request by Leslie Biek, civil traffic engineer for the city, to enter into an agreement with consulting firm Jones Petrie Rafinski for the design of the Winona Trail extension project at a not-to-exceed cost of $16,750.

“Currently, the Winona Trail ends at Waterford Elementary School,” Biek told the commission in presenting her request Tuesday. “There is also an existing trail that goes along Regent Street from Waterford Mills Parkway to Prairie View Elementary School, but the two trails do not connect and there is a railroad between them. It has been desired by the city and the public to connect the two trails.”

According to Biek, talk of the trail extension first arose in July 2018 when representatives of Bethany Christian Schools met with city officials to inform them of their plans to make improvements to the school’s athletic complex east of the railroad.

“During the meeting, they told the city they desired to make the school’s existing private (railroad) crossing a pedestrian crossing and have an emergency and maintenance drive through Winchester Trails,” Biek said of the discussion. “The city expressed the desire to also connect Winona Trails to the trail along Regent Street. In discussions with Bethany Christian Schools and Yes Communities, who manages Winchester Trails, it was discussed that the city would convert the existing private vehicular crossing to a public bike and pedestrian crossing and install a trail along the east side of the railroad tracks south to Winchester Trails.”

From that point, Biek noted the bike route would be signed and would connect to the existing trail on Regent Street. She also noted that, as planned, the trail would be wide enough and thick enough for emergency vehicles and maintenance vehicles that might need to access the trail in order to service Bethany’s athletic complex.

“The city asked JPR to provide a price and scope of service to design the path and prepare legal descriptions for the easements that would be required for the trail,” Biek said of Tuesday’s request. “The cost for surveying, easement descriptions, design, bidding services, and construction administration ... is a not-to-exceed price of $16,750.”

According to the contract, JPR has already performed and provided the topographic survey of the Bethany Christian property.

“As part of this proposal, JPR will collect and develop the additional topographic survey required in the YES Communities property ... and provide the design, engineering, bidding, and construction administration services required to complete the extension,” the contract states.

Given the planned trail extension’s close proximity to Bethany Christian Schools, commission member Brett Weddell asked whether it might be possible to come to some type of cost-sharing agreement with the school when it comes to the building of the trail, which, as currently proposed, would be solely the responsibility of the city.

“I’ve walked this countless times, and there’s always been that disconnect on being able to get across the tracks there,” Weddell said. “So, I think it’s important and, whether or not it should be solely the city’s responsibility, we can have that conversation later. But the idea of this trail connection is important.”

Biek responded by noting agreements with Bethany and Yes Management still need to be hashed out before the project can proceed, so there is still a possibility that some form of cost-sharing option could be included as part of the overall trail extension project.

“We’ll get legal on that to start those conversations,” she said.

The requested contract with JPR was approved unanimously, pending final review by the Goshen legal department.