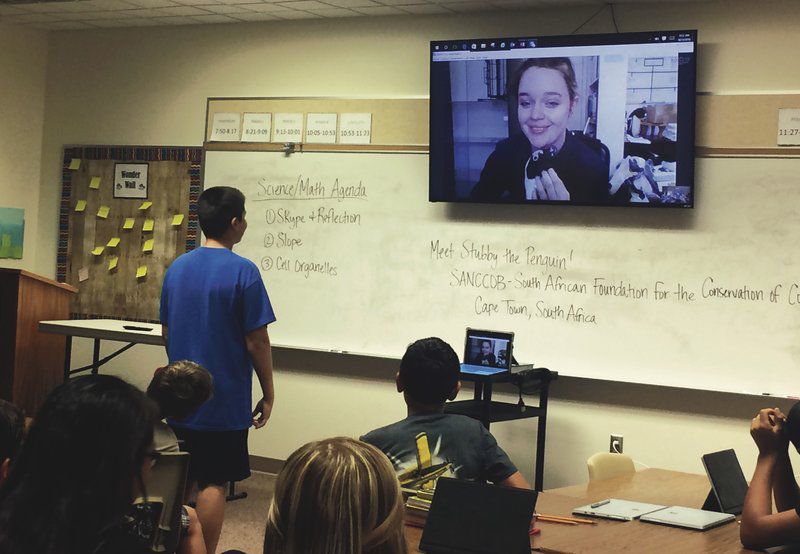 PHOTO PROVIDED. Seventh-grader Wesley Steiner asks a question to Tamlyn Hardy, an instructor with SANCCOB, a penguin rescue located in Cape Town, South Africa. The question was asked during a Skype virtual field trip held in a STEM class that integrates science and math activities at NorthWood Middle School in Wakarusa. 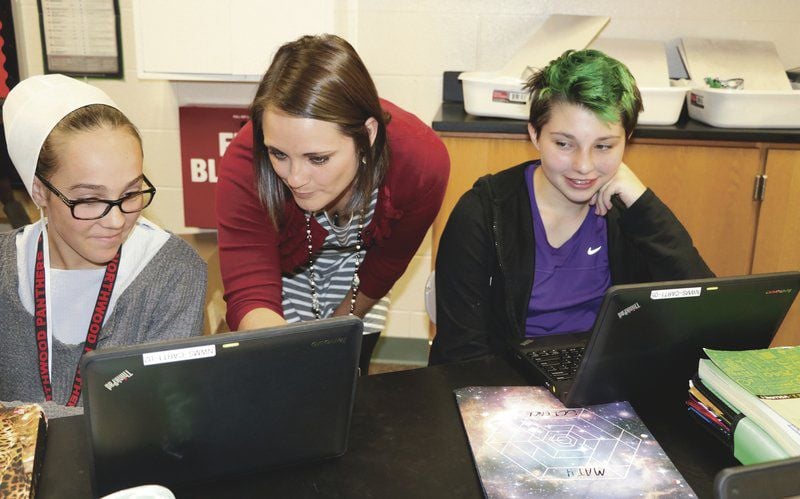 PHOTO PROVIDED. Seventh-grader Wesley Steiner asks a question to Tamlyn Hardy, an instructor with SANCCOB, a penguin rescue located in Cape Town, South Africa. The question was asked during a Skype virtual field trip held in a STEM class that integrates science and math activities at NorthWood Middle School in Wakarusa.

WAKARUSA — With the help of Skype and a little creativity from their teacher, a group of seventh-grade students recently took a virtual field trip to a penguin rescue 8,400 miles miles away in Cape Town, South Africa, from the comfort of their NorthWood Middle School classroom.

The 44 students are part of a pilot Science, Technology, Engineering and Mathematics, or STEM, program taught by Jaime Martin, a seventh-grade science and math teacher.

Martin has the students for two periods each day in a double math and science block period during which she uses a STEM curriculum focusing on integrating more technology-based math and science activities.

“It’s nice to have the extra time with the kids. We are trying to combine them together with projects as often as we can,” Martin said. “It’s a curriculum we are working on so it’s always ever changing. We have done a lot of great activities so far.”

After using the pilot program for only a couple months, Martin said she has noticed a definite difference in student learning.

“The students are really engaged even when we’re not doing specific STEM activities,” Martin said. “My classes are very project-based, very group oriented and find they work well together. They are actively participating whatever the activity is, whether it’s a problem out of a math book or Spheros. It’s been a positive experience.”

Principal Bart Rice said Martin was approached to help pilot the STEM program and she accepted the challenge with open arms.

“This is the quality that I see in her — to accept the challenge. She took this on because she is always looking for opportunities to improve what she is doing,” Rice said. “She has an interest in science and welcomed the opportunity to extend what she was doing with her students and make it more applicable and when I threw in the fact that this would be a benefit for the school, she said, ‘Let’s do it.’ She worked all summer working on the curriculum, doing the research, putting it all together while raising two small twins. This is one of the most energetic people you will meet. She’s incredibly positive and takes everything with a positive attitude and we are very grateful and fortunate to have her here.”

Martin said she’s enjoyed the challenge, explaining that her time in the classroom seems to go by much faster than before.

“The content is fun and how we are doing it is fun,” she said.

About the field trip

During the virtual field trip, Southern African Foundation for the Conservation of Coastal Birds instructor Tamlyn Hardy told students about their organization and what they do with the penguins after being brought to the rescue for treatment after being exposed to an oil spill.

“They showed us around their facility and all the penguins they have there. It was a really neat experience. They thought it was neat to see and talk to someone in Cape Town, South Africa. The kids had fun watching the penguins waddle around and swim,” Martin said. “The kids got to learn not only about penguins but also about the environmental effect of oil spills. It was something they had never done before and they never left the classroom.”

The field trip lasted about 35 minutes — short enough to fit into a class period, Martin said.

Students also learned that there was a four-hour time difference between their countries and also discussed distance, mileage and location on a map.

Martin's students tested the speed the robots compared to the distance traveled, and then graphed their data to determine whether or not it was proportional.

Seventh-grade Amanda Borkholder said using the Sphero was fun and learned the way time and speed interact and affect each other. The programming wasn't too difficult and gave an idea of how a robot is programmed and how technology works, she added.

"We were starting to learn about proportional relationships at the same time. We graphed our data then used those graphs to determine a proportional relationship," Borkholder said. "I like the challenge we did at the end. We had to figure out how to make the Spheros move in a line then turn around and come back to us without stopping and us giving it another command."

The robot activity blended pieces of engineering, science and math together and the students had fun in the process, Martin explained.

"It’s a really great way to get extra technology skills and still incorporate math and science standards," she said. "We hope to do more coding with Spheros and find percentages of speed.”