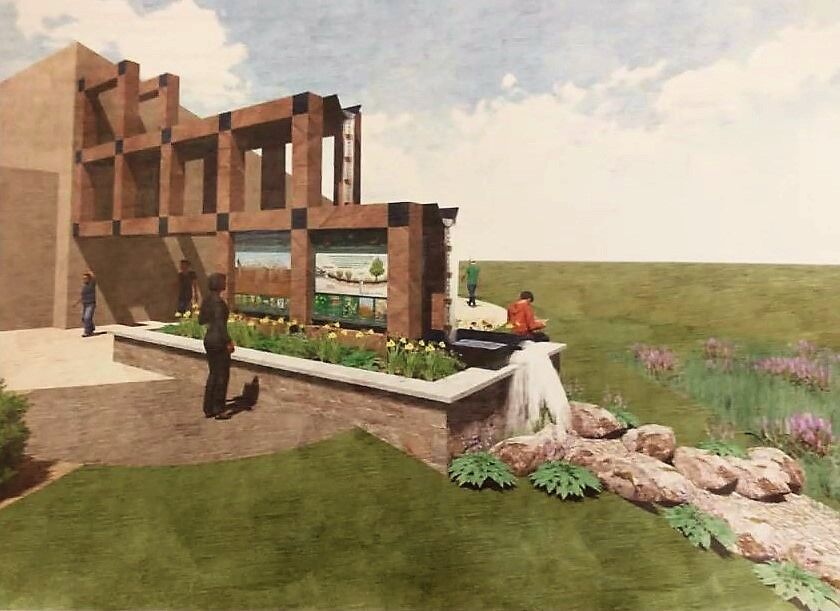 This provided rendering shows an example of what a new water feature planned for the city’s Ashley VanVurst Sensory Trail will look like. A contract connected to the project was approved by the Goshen Board of Public Works and Safety Monday afternoon. 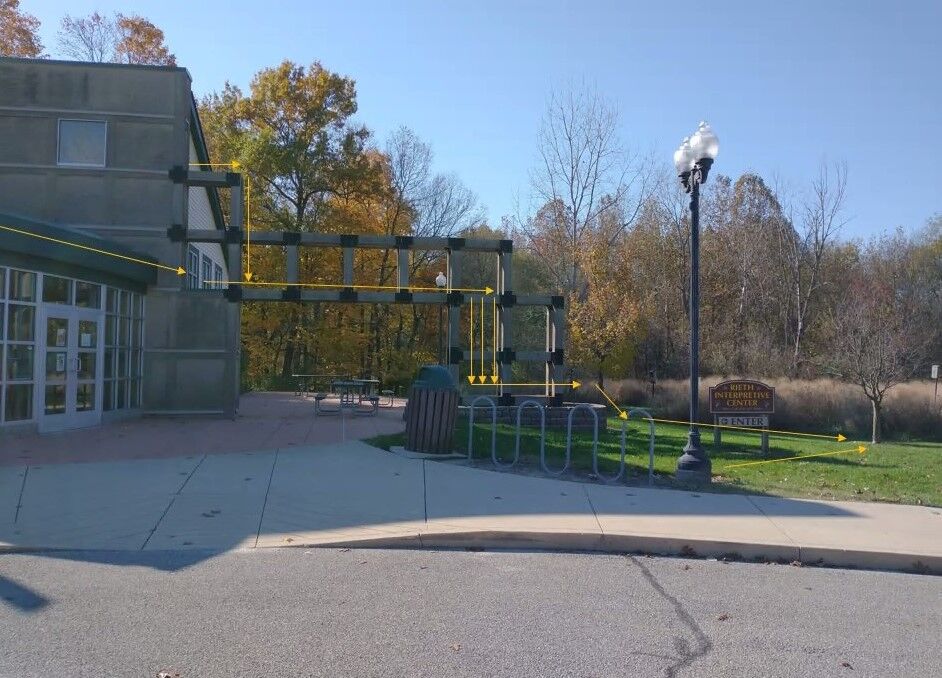 This provided photo shows the path collected rainwater will take from the roof of the Goshen Rieth Interpretive Center to a new water feature planned for the city’s Ashley VanVurst Sensory Trail.

This provided rendering shows an example of what a new water feature planned for the city’s Ashley VanVurst Sensory Trail will look like. A contract connected to the project was approved by the Goshen Board of Public Works and Safety Monday afternoon.

This provided photo shows the path collected rainwater will take from the roof of the Goshen Rieth Interpretive Center to a new water feature planned for the city’s Ashley VanVurst Sensory Trail.

GOSHEN — A new water feature will soon be added to the city’s recently dedicated Ashley VanVurst Sensory Trail following action by the Goshen Board of Public Works and Safety Monday afternoon.

At the meeting, board members approved a contract not to exceed $24,000 with Aquascapes Consulting LLC for on-site consulting services connected to the construction of a new water feature for the sensory trail at the Goshen Rieth Interpretive Center, 410 W. Plymouth Ave.

According to Theresa Sailor, project manager for the trail, the plan is to have Aquascapes consult for the overall design and look of the project, while Goshen Parks and Recreation Department staff will do the actual construction work in-house.

As for the proposed water feature, Sailor noted that the plan includes constructing some additional gutters on the roof of the Rieth Interpretive Center that will be able to capture rain water and feed it into a system of troughs and rain chains that will eventually deposit the water into a shallow pond-type water feature to the side of the building.

“Aquascapes actually does rain reclamation, which is what we’re doing here,” Sailor told the board. “We’re grabbing that rain water, and then it will just kind of circle around all the way down to the bottom of the pond.”

Sailor described the new water feature as being shallow, filled with small rocks, with larger rocks lining the sides that will help direct the water as it flows over the smaller rocks. A set of pumps at the bottom of the feature will then recirculate the water back to the top of the building, creating an always-moving water cascade to the water feature.

“It will continually be moving all the time,” Sailor said of the water. “So, when you go and visit, it will be moving water. ... So, it will capture anything that falls on it, but it will also capture from the office area where we attach that extended gutter, and we’ll put water in there.”

Sailor said the idea behind the recirculation system is that there shouldn’t be a need to physically add water to the system unless the city has an extended dry period.

“This is a biofiltration system, so that there’s no chemicals,” Sailor said. “It means that wildlife can drink out of it. You can play in it. If you have kids, they can take their shoes off, or don’t, and get in there and rearrange rocks. That’s fine.

“The point was that you should be able to touch the water, because we have great waterways along the trail, but we don’t have anything where you can actually touch the water,” she added. “And then, of course, you could just sit and listen to it. So, it was going to be for mental health. That was one of the things that ADEC stresses as one of the most important things we could do for persons with disabilities, and helping to improve mental health, would be to have the sound of water.”

As for a timetable for the project, Sailor said barring any unforeseen issues, the plan is to have the new water feature completed by the Thanksgiving holiday.

The requested contract was approved unanimously.

The trail is a collaborative effort between the city and Bristol-based ADEC Inc., a local nonprofit organization that advocates for and serves people with developmental and intellectual disabilities in Elkhart and St. Joseph counties.

Plans for the new trail were first announced back in January with the goal of helping to connect people with disabilities to the health benefits of nature through the development of a new sensory trail. Such trails are built to have a series of experiences along a route designed for users to engage with their different senses. Varied surfaces and stations housing different smells and sounds are often features of sensory trails.

To fund the project, the city joined with ADEC in applying for a $200,000 Community Connections for People with Disabilities Grant, which is offered through the Indiana Office of Community and Rural Affairs in partnership with the Indiana Division of Disability and Rehabilitative Services.

An app for the public to use while navigating the trail is currently in development. For more information visit www.ADECinc.com.

In other business, board members approved:

• The promotion of Travis Peak to the rank of fire captain with the Goshen Fire Department effective Monday.

• The promotion of Matthew Dunithan to the rank of fire lieutenant for the Goshen Fire Department effective Monday.

• The promotion of Camden Bontrager to the rank of fire sergeant for the Goshen Fire Department effective Monday.

• A $3,600 contract with Chad Cripe to paint the walls and trim of the lower area of Goshen City Hall.

• A $9,609 contract with Newbury Square Construction LLC for the installation of a new steel roof over the existing shingle roof at Violett Cemetery, 2818 Violett Road, that was damaged by hail.

• A grant agreement with Indiana Public Employers’ Plan Inc. for the purchase of a drone for the Goshen Fire Department. As an 80/20 grant, the total purchase price for the drone is $7,273, with the city responsible for 20% of the cost, or $1,454.

• A conditional offer of employment to Anthony Reese as a probationary patrol officer with the Goshen Police Department. Confirmation of employment will occur once a position opening becomes available at the department.