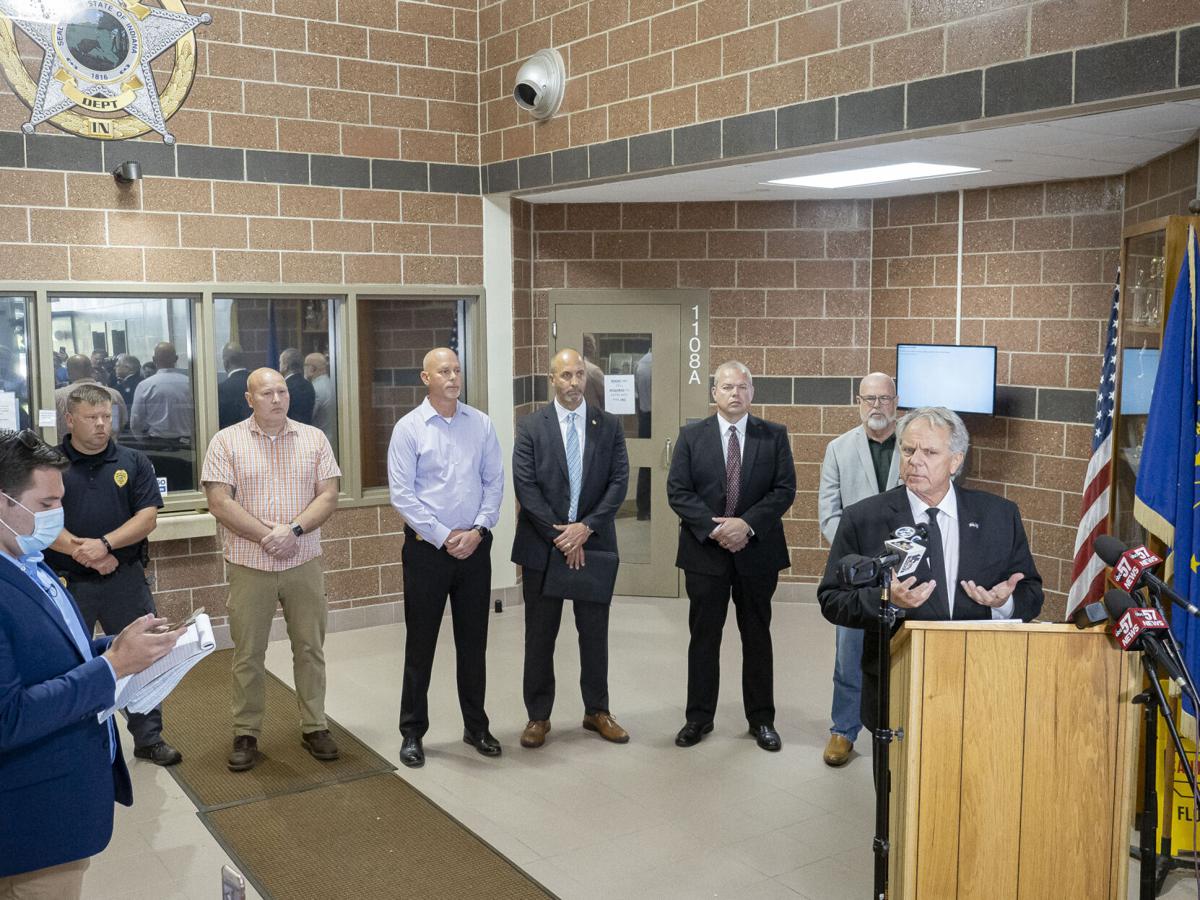 Marshall County Prosecutor Nelson Chipman, at podium, speaks to the media at a press conference regarding Mercedes Lain, 11 months, Thursday at the Marshall County Sheriff’s Office in Plymouth. Mercedes was reported missing Sunday and was found deceased Wednesday night in a wooded area near the intersection of 1025 East and 50 North in Starke County. 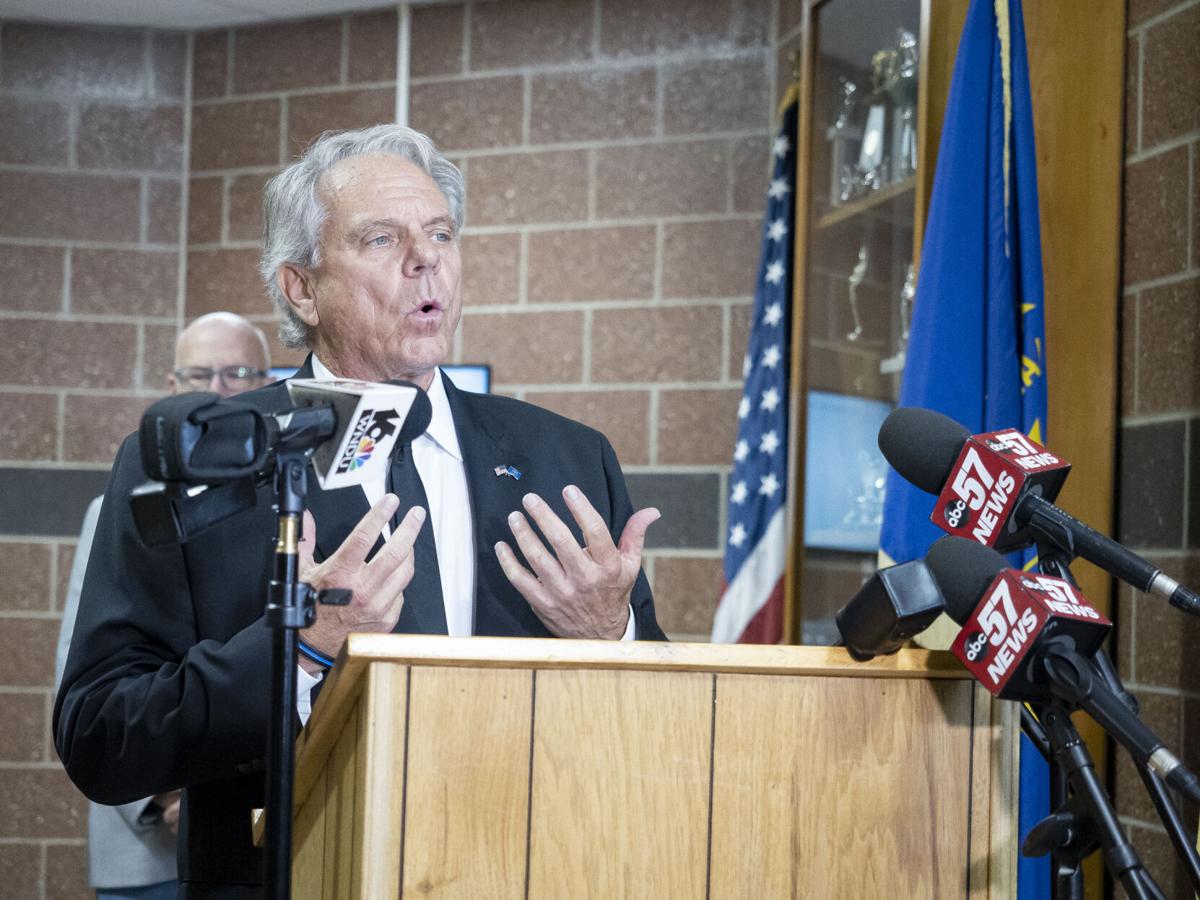 Marshall County Prosecutor Nelson Chipman, at podium, speaks to the media at a press conference regarding information of Mercedes Lain, 11 months, Thursday at the Marshall County Sheriff’s Office. Mercedes was reported missing Sunday and was found deceased Wednesday night in a wooded area near the intersection of 1025 East and 50 North in Starke County. 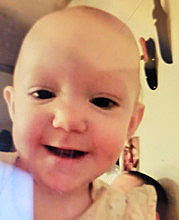 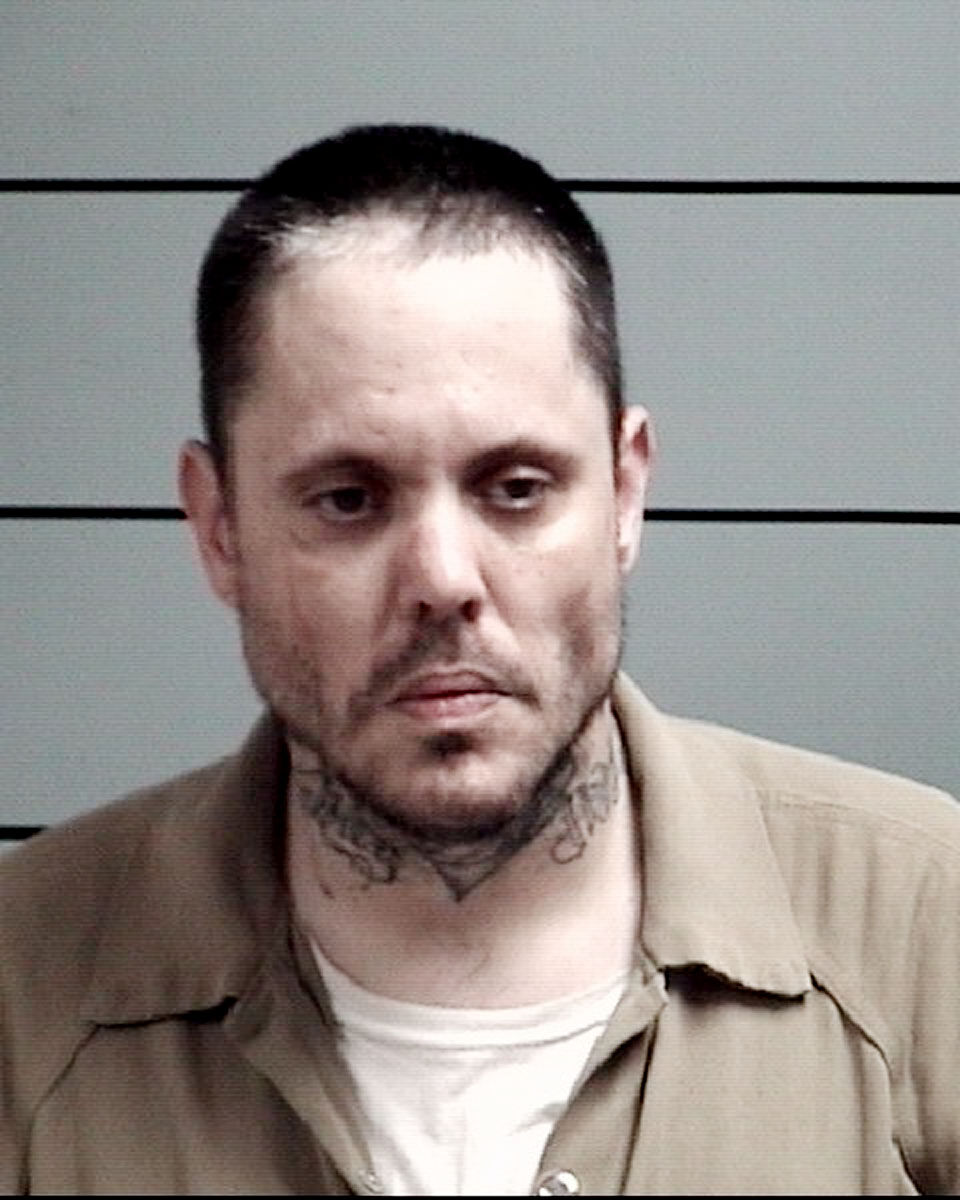 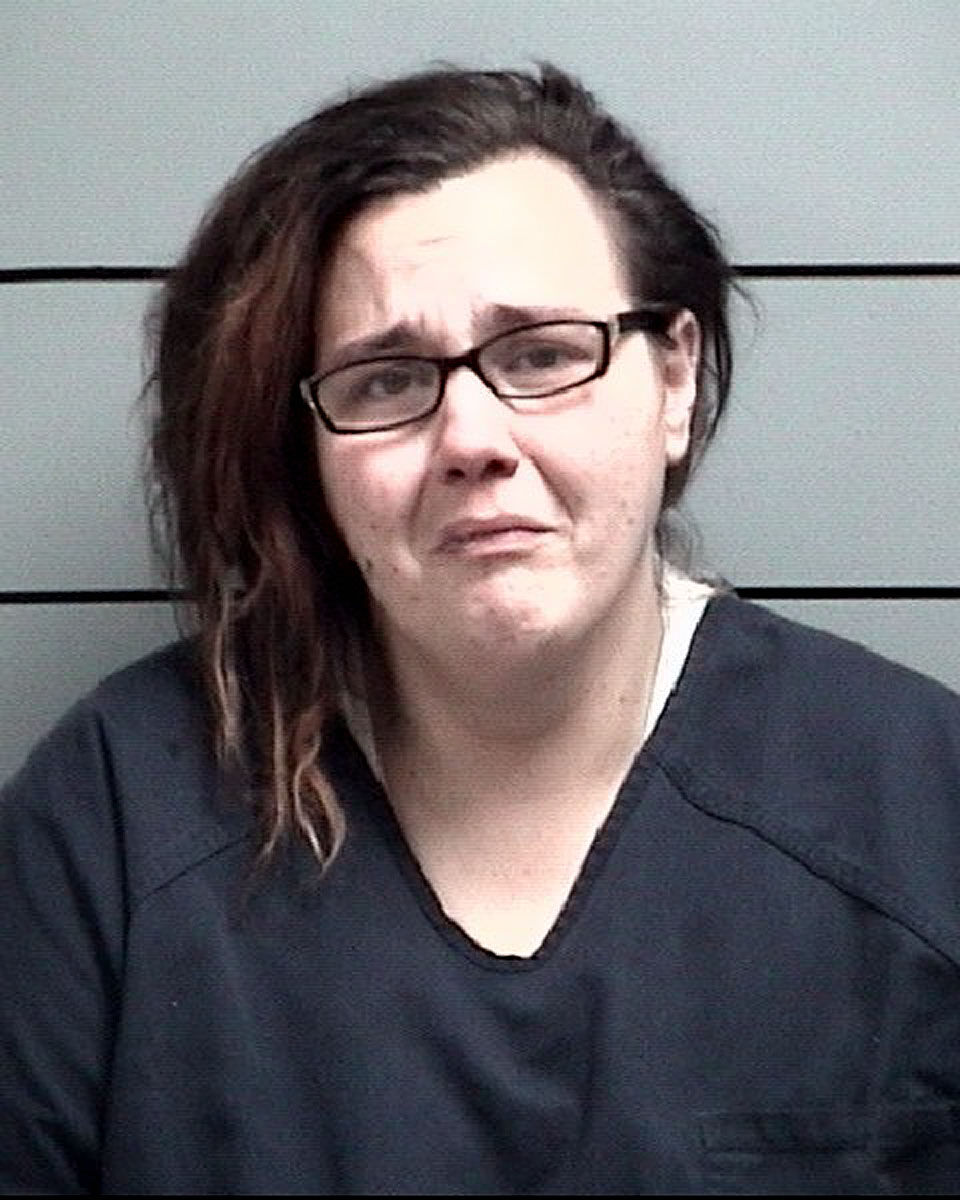 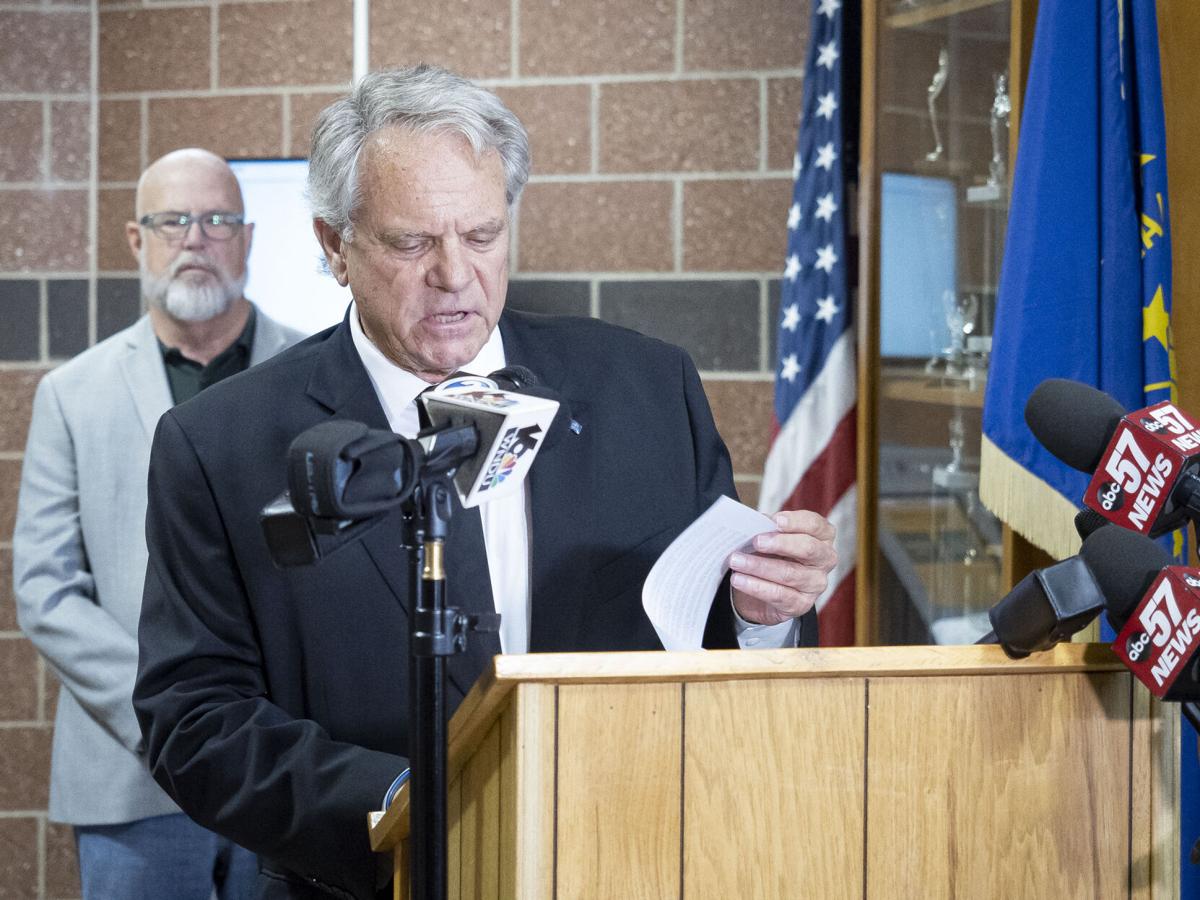 Marshall County Prosecutor Nelson Chipman, at podium, speaks to the media at a press conference regarding information of Mercedes Lain, 11 months, Thursday at the Marshall County Sheriff's Office in Plymouth. Mercedes was reported missing Sunday and was pronounced diseased Wednesday night in a wooded area near the intersection of 1025 East and 50 North in Starke County. 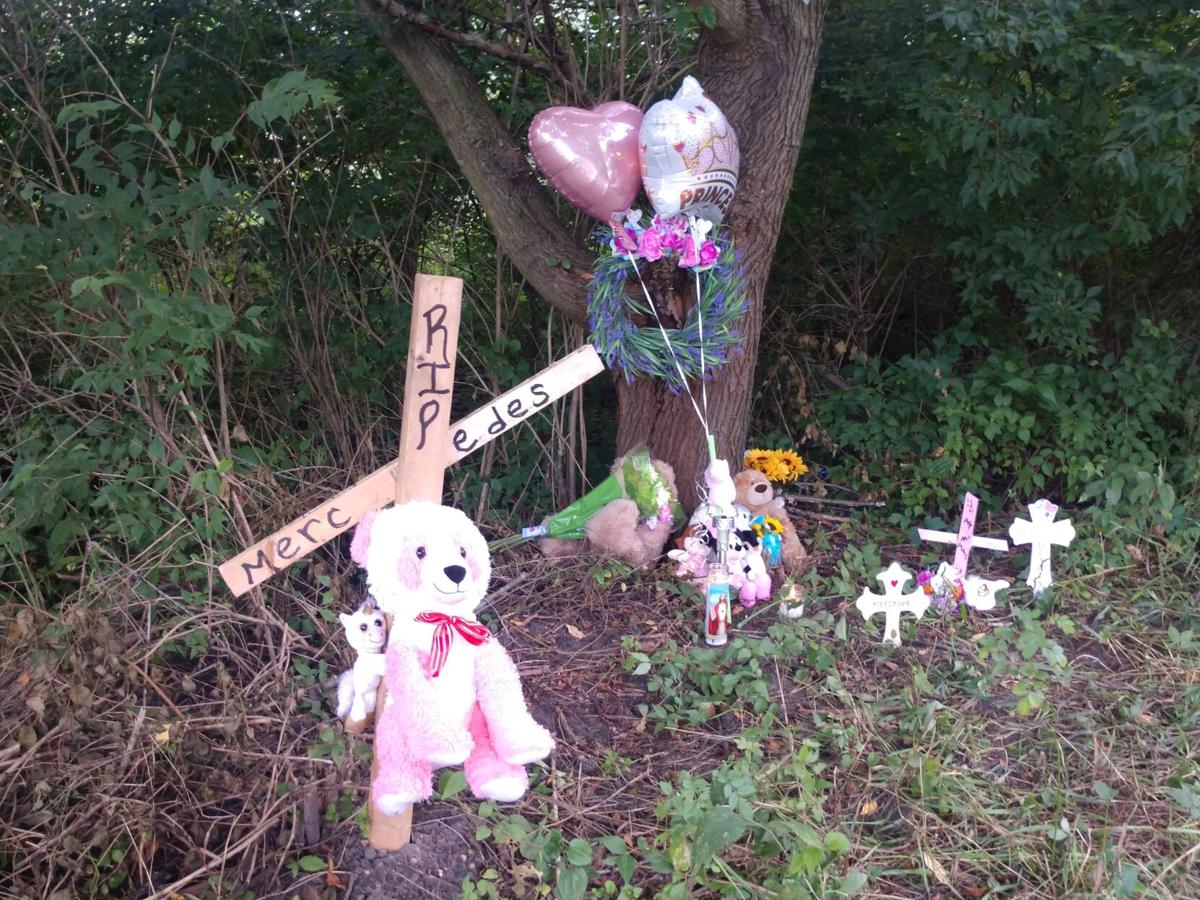 Crosses, balloons, stuffed animals and flowers make up a small memorial that was set up for 11-month-old Mercedes Lain in Starke County on Thursday. The site is at the mouth of a wooded area, across a t-intersection where C.R. 50 North meets C.R. 1025 East, where Lain's body was found after she was reported missing Sunday. 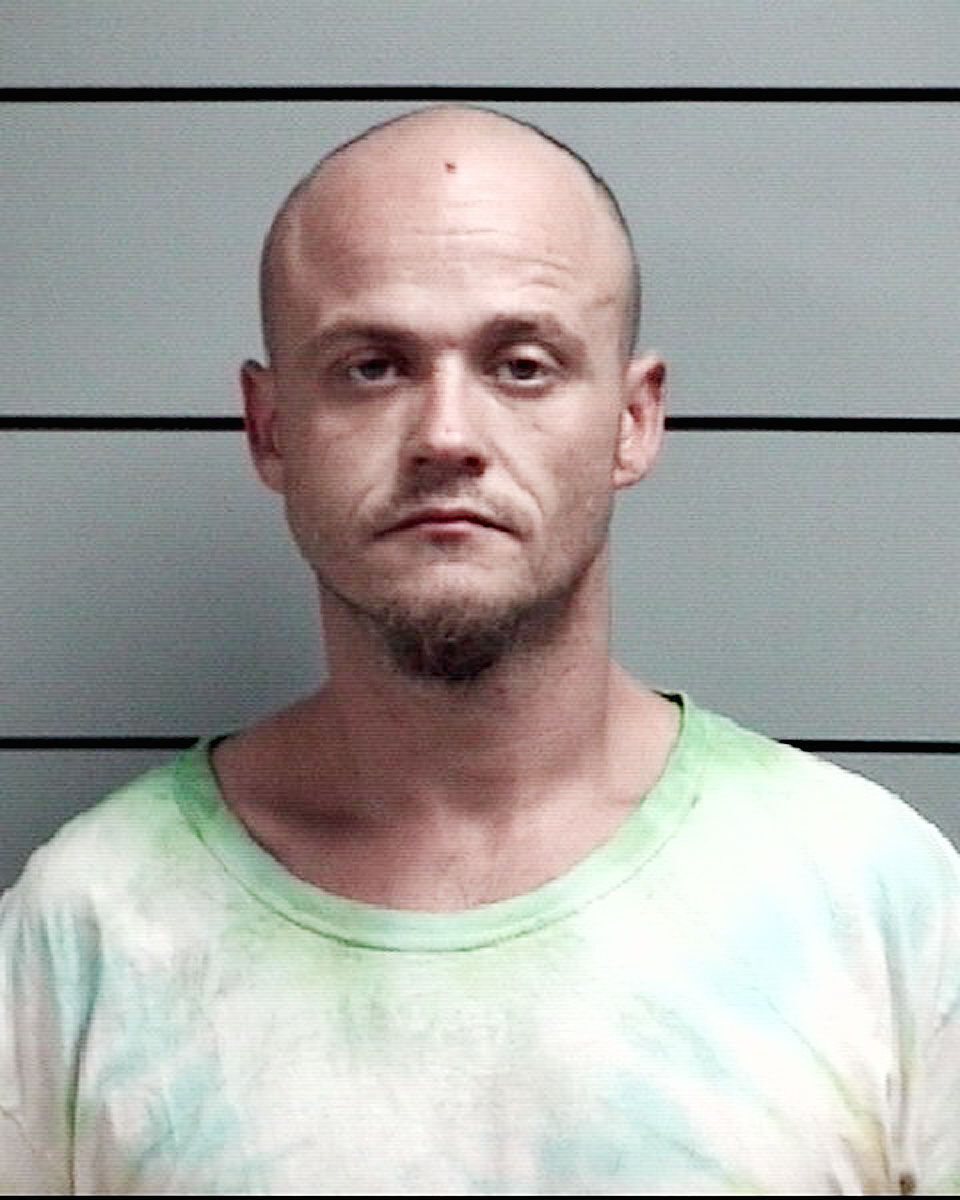 PLYMOUTH — The search for a missing Marshall County baby has ended tragically with investigators confirming she had died during the ordeal – and the man who last had the girl in his custody now faces a felony criminal charge in the case.

The body of 11-month-old Mercedes Lain was found around 9 p.m. Wednesday in what Marshall County Prosecutor Nelson Chipman described as, “a remote, obscure, densely forested area not far from the Starke County-Marshall County line” during a news conference in Plymouth Thursday.

The primary suspect in the case, Justin Miller, 37, Hamlet, had led investigators to the site somewhere near the intersection of C.R. 1025 East and C.R. 50 North in Starke County, according to Chipman. The area is apparently west of Plymouth, near the Starke County Forest.

The cause of Lain’s death had not yet been determined Thursday morning, as Chipman said an autopsy was still scheduled to be performed. Evidence gathered during the investigation indicated the girl may have died Saturday, about a day before her parents called 9-1-1 to report her missing, though Chipman pointed out it wasn’t clear yet when Mercedes died.

Miller is jailed in Marshall County facing a Level 1 felony charge of neglect of a dependent resulting in death. Chipman noted the case was in the process of being filed Thursday.

The girl’s parents, Kenneth Lain, 41, and Tiffany Coburn, 32, were also jailed and facing Level 6 felony counts of neglect of a dependent. Police said Lain and Coburn were in custody each on $15,000 bonds. Miller was being held without bond, possibly still awaiting a judge to set an amount.

Lain and Coburn reported Mercedes’ disappearance Sunday, telling police she was last with Miller. According to details in the probable cause affidavit filed in the case, Miller, a relative, had offered to watch the girl, starting around Thursday Aug. 12 or Friday, Aug. 13, to give the couple a weekend break from parenting, and they agreed.

Miller was supposed to bring Mercedes back Sunday, but contact with him apparently became sporadic, and they called 9-1-1. The investigation then prompted an Indiana Silver Alert, while officers from multiple agencies, including the FBI, aided in the search.

Investigators, though, worked through an apparently frustrating and, at times, confusing series of challenges to not just find Mercedes and Miller, but Lain and Coburn, as well. The affidavit describes a lack of cooperation by the parents, alleged drug use by all three suspects during the weekend, and conflicting information provided by Miller after he was taken into custody.

“The conversations and the timelines that were provided are so garbled, you will also see that there’s evidence of drug use,” Chipman said, pointing to the affidavit.

The timeline in the document shows Miller was found first, but without Mercedes, around 3:30 a.m. Monday at a man’s home in Starke County. Miller was then taken into custody.

During an interview with police, Miller allegedly said Lain had contacted him Thursday about purchasing synthetic marijuana. After Miller helped watch Mercedes for the parents, he allegedly told police differing accounts about his whereabouts, with the affidavit stating his, “recollection of events changed several times.” Miller had also allegedly admitted he smoked synthetic marijuana “numerous times” while he had Mercedes.

The man Miller was found staying with told police he saw Miller with Mercedes on Friday, they left, and when Miller returned Sunday, he returned alone.

The affidavit goes on to describe how investigators struggled to contact Lain and Coburn on Sunday while the search for Mercedes was underway.

Coburn was eventually found by police around 1:30 p.m. Monday at an Economy Inn motel in Plymouth and taken into custody. While she was interviewed, Coburn allegedly told police she and Lain had chatted numerous times with Miller via Facebook Messenger over the weekend. Coburn also allegedly admitted she’d used methamphetamine several times, the affidavit shows.

Lain was found at a different motel, the Red Rock Inn, around 6 p.m. Monday and allegedly under the influence of a substance, the affidavit shows. During his interview, Lain was said to back up Coburn’s story that they had communicated with Miller online but didn’t know his whereabouts. 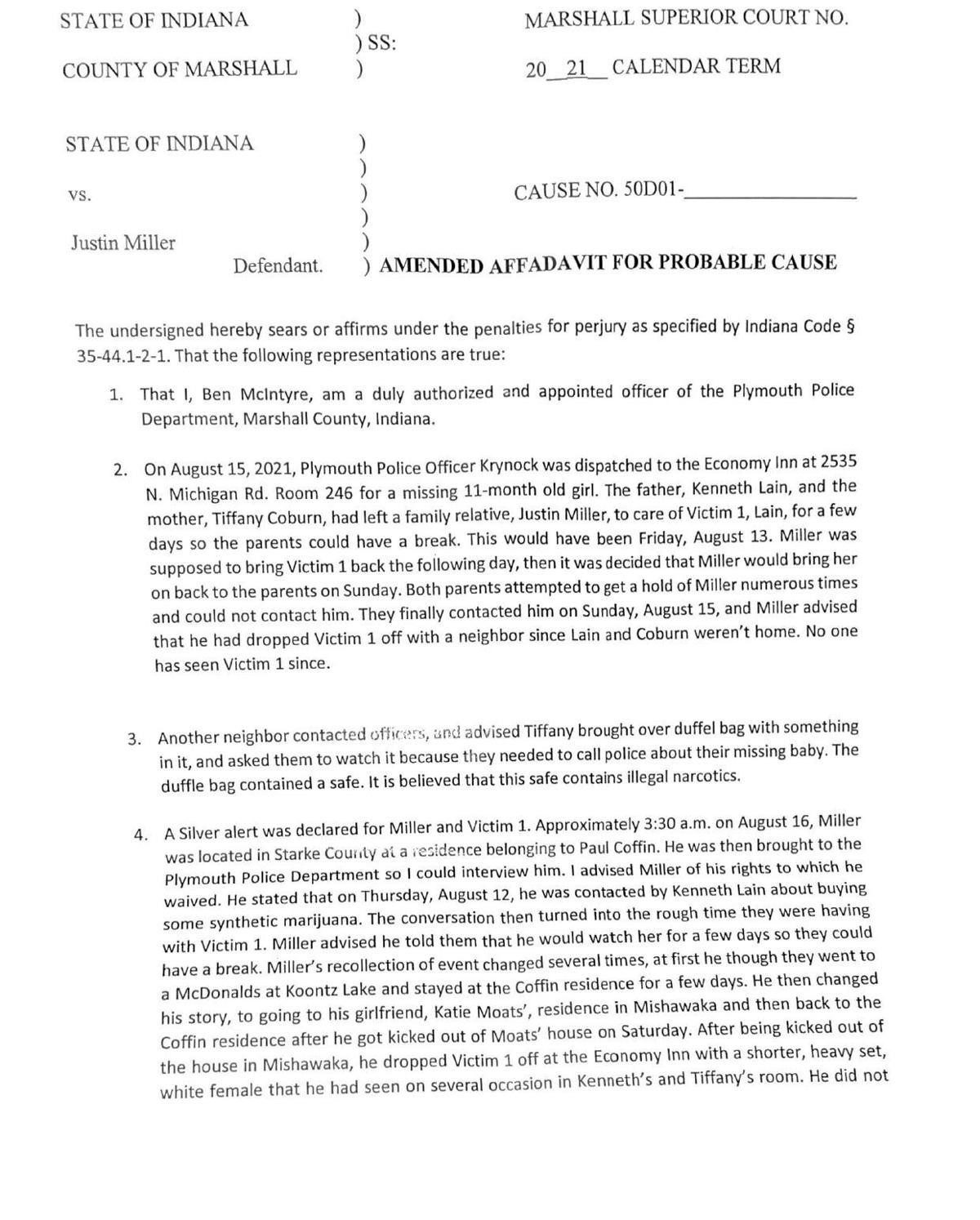 As the search continued, Miller allegedly admitted to investigators Wednesday that he’d woken up on Saturday to find Mercedes had died while they were at a house in Mishawaka. He allegedly took the child’s body from there and disposed of it in the forest in Starke County, the affidavit shows. He then led police to the site where the remains were located.

An impromptu memorial to Mercedes was set up Thursday near the site where Mercedes’ body was found. Mourners left crosses, balloons and stuffed animals on a patch of ground at the mouth of the forest across the t-intersection where C.R. 50 North meets C.R. 1025 East.

“I’m sorry it didn’t come to the conclusion that everybody wanted,” said Paul Keenan, the special agent in charge of the FBI office in Indianapolis. “It was a strong effort by everyone involved.”

The search for Mercedes involved police and investigators from Plymouth, Marshall County, the state police, FBI field offices in Indiana as well as a federal child abduction response team, and local task force officers out of Elkhart and surrounding counties, according to Chipman.

Plymouth Police Chief David Bacon thanked residents and the community for their help and cooperation during the search.

“The help that we received: It’s been outstanding,” Bacon said. “We appreciate everybody’s patience.”

Miller, Lain and Coburn could potentially appear for initial court hearings in the case in Marshall County Friday, Chipman said.