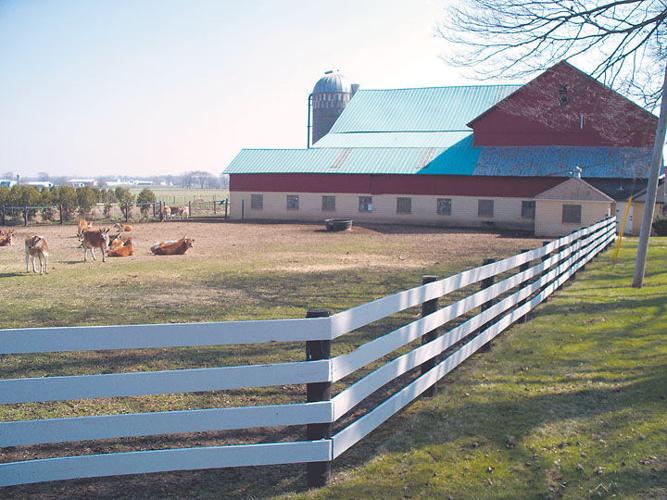 DAIRY CALVES rest in a holding area at Forest Grove Farm, Middlebury in this Goshen News file photo from March 2010. Agents from The Federal Drug Administration want to inspect the farm, owned by Amishman David Hochstetler, in wake of an illness outbreak in Michigan. FDA agents believe the outbreak was caused by raw milk produced and shipped from Hochstetler’s farm. Elkhart County Sheriff Brad Rogers told the agents they need a court order before they will be allowed on the property.

DAIRY CALVES rest in a holding area at Forest Grove Farm, Middlebury in this Goshen News file photo from March 2010. Agents from The Federal Drug Administration want to inspect the farm, owned by Amishman David Hochstetler, in wake of an illness outbreak in Michigan. FDA agents believe the outbreak was caused by raw milk produced and shipped from Hochstetler’s farm. Elkhart County Sheriff Brad Rogers told the agents they need a court order before they will be allowed on the property.

David Hochstetler of rural Middlebury distributes raw milk to people who buy into his herd of Jersey cows. That action has drawn the ire of the Food and Drug Administration, which wants to inspect his farm because it believes it is the source of a 2010 bacteria outbreak in Michigan. But Sheriff Brad Rogers has a message for the FDA, which is “get a warrant.”

The conflict between the local and federal authorities came to a head two weeks ago when Hochstetler was summoned to testify before a federal grand jury in Detroit. He declined to appear, invoking his 5th Amendment right. Sheriff Rogers also notified the Justice Department attorney that if FDA agents tried to inspect Hochstetler’s farm without a signed warrant, they would be arrested on trespassing charges.

Since then the federal subpoena for Hochstetler has been withdrawn, according to Rogers.

The sheriff sees his action as protecting a local Amish resident, who he called “an honest man,” from being harassed by federal officials.

“The thing is that if the FDA agents come in and they meet with the farmer and the farmer wants them to come in, I don’t have a problem with that,” Rogers said. “But in this case Mr. Hochstetler did not want the agents there. This is an administrative rule of the federal government and I think people are tired of the federal government walking all over everybody and it is time to take a stand for states’ rights.”

Rogers said sheriffs across the country are beginning to resist actions by federal regulatory agencies when a warrant has not been issued. He cited a 1997 Supreme Court ruling, Printz vs. The United States, that found in favor of a sheriff who did not want to enforce the federal Brady Act gun laws. That act required local law officers to enforce the federal law. The case was based on the 10th Amendment, which states that powers not specifically granted to the federal government are reserved for the states.

Ross Goldstein is the Justice Department attorney who is investigating Hochstetler’s operation. Friday he declined to comment on the case, saying federal law prohibits him from talking about grand jury cases.

“We can’t talk about it,” Goldstein said, “because there is an ongoing federal investigation.”

But Goldstein did email Rogers and warned him that interfering with a federal investigation could be prosecuted as a felony and would carry up to a three-year term in prison. Goldstein also cited the federal “supremacy clause” that the Supreme Court has interpreted as making federal rules and laws superior to local ones.

“The supremacy clause has been interpreted since the earliest days of the nation to mean that federal law trumps state law whenever the two conflict,” Goldstein wrote.

And the attorney contends that federal law specifically allows the inspection of Hochstetler’s farm without a warrant.

“Because Forest Grove Dairy manufactures, processes, packages or holds food, the provision of federal law authorizes FDA personnel to enter Mr. Hochstetler’s property,” Goldstein wrote. “Because it is a federal law, indeed an act of Congress, officers or employees of the FDA may do so lawfully without regard to any Indiana law to the contrary.”

After receiving the email, Rogers indicated he is not changing his stance. He said he has talked to county attorneys about the issue, but in the end, any action or inaction is his call.

There have been no recent attempts by the FDA to inspect Hochstetler’s farm, Rogers said. The last attempt was in March, at which time Hochstetler refused entry to the inspectors, according to the sheriff.

“He was desperate, frustrated at what he perceived as harassment,”Rogers said of Hochstetler, who contacted him for help. “This man is an Amish man, an honest man who is trying to make a living.”

When contacted by The News, Hochstetler declined to comment for this article

Rogers said he has been receiving new email in support of his action about every 10 minutes since word about his warning to the FDA spread across the Internet.

One of those supporters is Deborah Stockton, executive director of the National Independent Consumers and Farmers Association. Her agency is an advocate for small farmers who want to sell ag products directly to consumers. She sees Rogers as a brave man taking on the massive and powerful established agriculture industry and government agencies that support that industry.

“I think it was a brave thing for him to do,” she said. “This is increasingly occurring around the country.”

She said the FDA has taken a strong stance against the consumption of raw milk, which puts the agency in conflict with thousands of consumers who see raw milk as a nutritious and healthy alternative to pasteurized and homogenized milk.

Congress banned the sale of raw milk in 1987, so consumers have bought shares in cow herds to get around that ban.

“There are very few instances where it was proved raw milk was linked to illnesses,” Stockton said.

She also wondered why the FDA, which she claimed cited the lack of funds for other investigations, particularly an outbreak of illness traced to a peanut plant, has spent so much time going after Hochstetler.

“But they do have enough money to have a two-year undercover operation against an Amish farmer whose product has not hurt anyone,” Stockton said.

The Michigan Department of Health believes Hochstetler’s raw milk has caused illnesses. The department issued a health warning March 19, 2010, which claimed that raw milk from Hochstetler’s Forest Grove Dairy and distributed through a food co-op in Vandalia, Mich., was the source of campylobacter, a bacteria that sickened at least 13 people in Michigan who drank the milk.

In April 2010, Hochstetler told The Goshen News that he had an independent lab test of his milk for the bacteria and nothing was found.

On Friday, a spokeswoman for the Michigan Department of Health said her department has turned over test results from that outbreak in 2010 to the FDA.

“Our epidemiological evidence points to Forest Grove, that the milk came from Forest Grove,” spokeswoman Angela Minicuci said. “From there it was turned over to FDA for investigation.”

The issue is rights

Rogers said his whole point in confronting the FDA is to protect the Constitutional rights of local residents. He indicated he wants the federal agency to go through the court system and present its evidence to a judge, who could then decide if there was enough evidence to justify the issuance of a warrant allowing the inspection of Forest Grover Dairy.

“Due process is the important part of it... Quite frankly, we have state laws and county ordinances and so on,” Rogers said. “For example, the health department does inspections. Even with those, I am very pro health department, but on the other hand, if the store owner says ‘No, I don’t want you coming in,’ they will probably close them down, and that’s fine. But they don’t have to let them come in, in the true sense of the word. They have the right to go further with their due process.”

And Rogers’ reasoning is something Stockton finds refreshing.

“Sheriff Rogers has taken on the role that we hope every sheriff in the country will take... upholding his oath of office and protecting the inalienable rights of everyone,” she said.