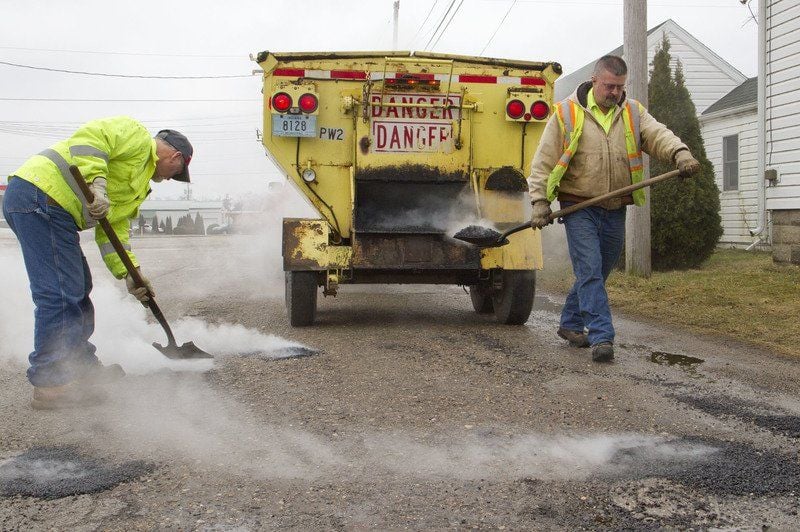 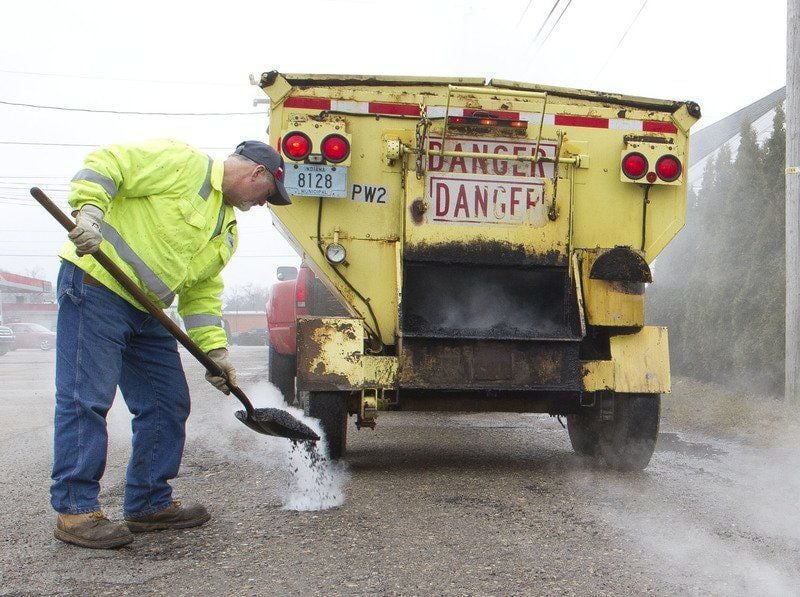 SAM HOUSEHOLDER | THE GOSHEN NEWSRICK HALL of the Goshen Street Department fills a pothole in an alley between Huron Street and Denver Avenue Wednesday. This week is Work Zone Awareness Week and the Indiana Department of Transportation is asking motorists to slow down while traveling through work zones. 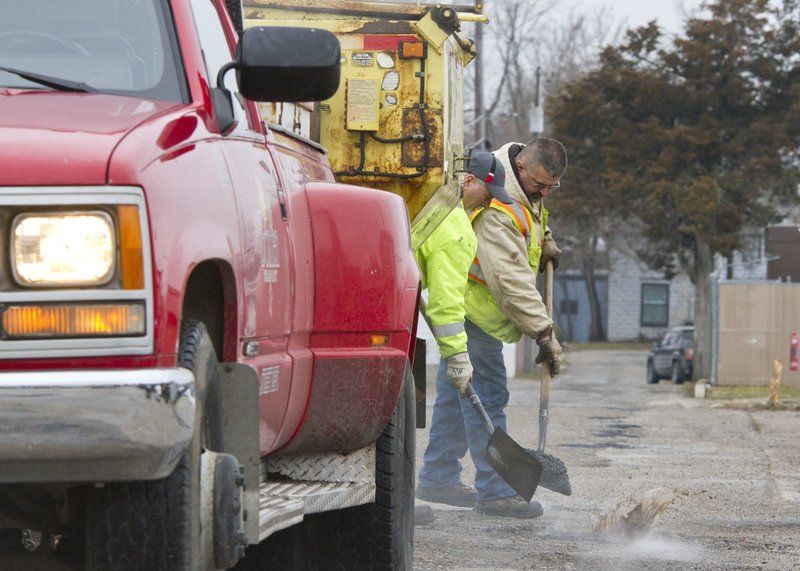 PHOTOS BY SAM HOUSEHOLDER | THE GOSHEN NEWSGOSHEN STREET DEPARTMENT workers Rick Hall, left and Todd Turner, fill a pothole in an alley between Denver Avenue and Huron Street Wednesday. Members of the Goshen Street Department have had close calls with motorists not paying attention while they work.

SAM HOUSEHOLDER | THE GOSHEN NEWSRICK HALL of the Goshen Street Department fills a pothole in an alley between Huron Street and Denver Avenue Wednesday. This week is Work Zone Awareness Week and the Indiana Department of Transportation is asking motorists to slow down while traveling through work zones.

PHOTOS BY SAM HOUSEHOLDER | THE GOSHEN NEWSGOSHEN STREET DEPARTMENT workers Rick Hall, left and Todd Turner, fill a pothole in an alley between Denver Avenue and Huron Street Wednesday. Members of the Goshen Street Department have had close calls with motorists not paying attention while they work.

When Ron Pollock got back into the Goshen Street Department truck his co-worker showed him his cell phone with the numbers 9-1 dialed.

Pollock had been filling potholes along Pike Street in front of the Goshen post office for the upcoming Memorial Day parade when a driver wasn’t paying attention and swerved at the last moment to avoid striking Pollock.

“I seen the hood go through here,” he said, holding up his arm as he had been while he shoveled asphalt out of the bed of the asphalt wagon and motioning where the car passed that day.

“When I got back in the truck, Steve (Howard), said ‘I just knew she had you, I knew she was going to hit you.’”

Fortunately, Howard did not have to press the final “1” on his phone.

Many of the Goshen Street Department workers have similar stories of close calls they have had while patching potholes, working on water mains or performing their other daily duties.

According to the Indiana Department of Transportation, Gov. Mike Pence has proclaimed this week Work Zone Awareness Week.

According to INDOT, 11 people were killed and more than 600 injured in work zones last year in Indiana.

The awareness week is aimed at alerting drivers to the start of construction season and the precautions drivers should take. INDOT said that most work zone accidents stem from following too closely or improper lane changes.

Goshen workers said that most of the near-misses they’ve seen stem from distracted drivers.

“The biggest problem is that phone,” said Bob Flect.

The other issue is that people are just in a hurry and see road maintenance and work as an obstacle.

“Even before cell phones, (to) people we’re obstacles, they just want to get where they’re going as fast as they can,” said Randy Robbins, who had a close call while closing a road more than 10 years ago.

“We were working on a water leak, I had just set up the road closed sign and I took about three steps and I heard “smack.” I look, tires screeching, a pickup truck went right through it,” he said.

“She said, ‘Oh I’ve had a bad day’ and I said ‘you almost made my day terrible,’” Robbins said.

Mike Hrynewycz, who said he’s been working for the city ‘since dirt was invented,’ recalled when a car struck one of the trailers they had behind a truck while they were working on Kercher Road.

Hrynewycz, who calls Kercher Road ‘death road,’ said he and the other guys he works with take precautions, like using trucks as a buffer between themselves and traffic and minimizing the time they are openly exposed to the traffic.

“When you’re out there on the street, you keep your head on a swivel,” said co-worker Dana Platz.

Flect said that while city workers have managed to stay out of the way of passing cars, their equipment; signs, posts, traffic barriers and cones, get struck all the time.

Many times the department workers said driver attitudes can be as much of a problem as the distracted drivers.

“They complain that the hole isn’t fixed and then they’re complaining when you’re in their way fixing the hole. It’s like you can’t please them,” Pollock said.

The workers get honked at, sworn at and see obscene gestures nearly every day.

“We’re number one all the time, every day,” Hrynewycz said, eliciting head nods and agreement from his co-workers inside the street department’s break room.

One time, Hrynewycz said he even thanked a driver who was less than enthused about his truck being in her way.

“I said, thanks for telling me I’m number one today because I’m tired of being on the bottom of the list, it’s nice to know I’m at the top of yours and have a nice day,’” he told the frustrated driver before she drove away.

The workers just ask drivers to slow down when the signs say slow down and to keep distractions away, especially when approaching work zones and orange flashing lights.

Police say they do what they can to enforce work zone speed limits, but that the things that make zones dangerous in the first place, lane restrictions and slowing cars, can make it difficult for police as well.

“Sometimes when a police officer is seen in the area of a work zone the traffic can get even more backed up,” said Goshen Patrol Division Chief Shawn Turner.

“We do try to get to the work zones when we know they are there,” he said, adding that manpower can be the single biggest issue when it comes to officers’ duties.

Elkhart County Sheriff’s spokesman Cpt. Jim Bradberry said that the high fines that come with work zone infractions should work as a deterrent for drivers.

“It’s a matter of just trying to get people to slow down because we have people out there working,” he said.

Turner added that police empathize with work crews because they can understand the danger of working with traffic when they pull vehicles over.

Both Bradberry and Turner said that their officers have been hired on their off-duty time to patrol work zones that have become problematic for workers.

All involved hope that drivers minimize their distractions and pay attention to road signs.

“Those signs mean something, it means our safety,” Howard said.