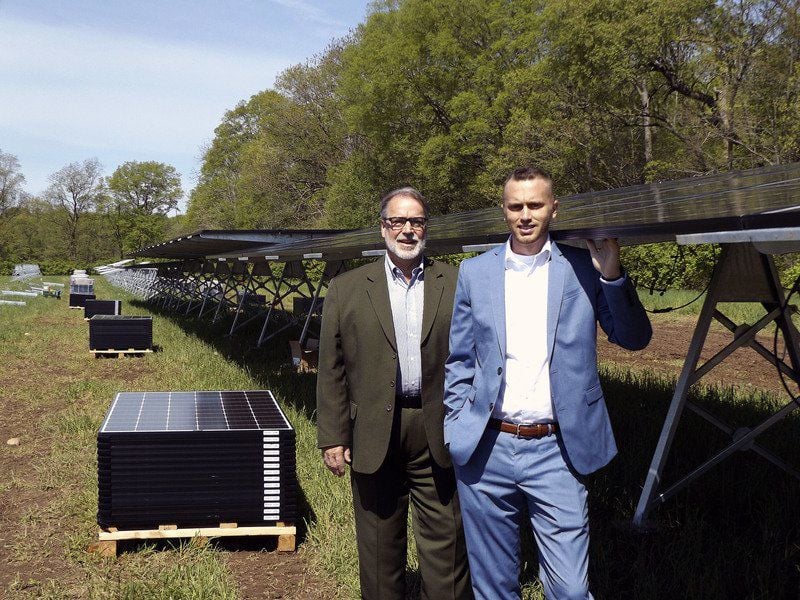 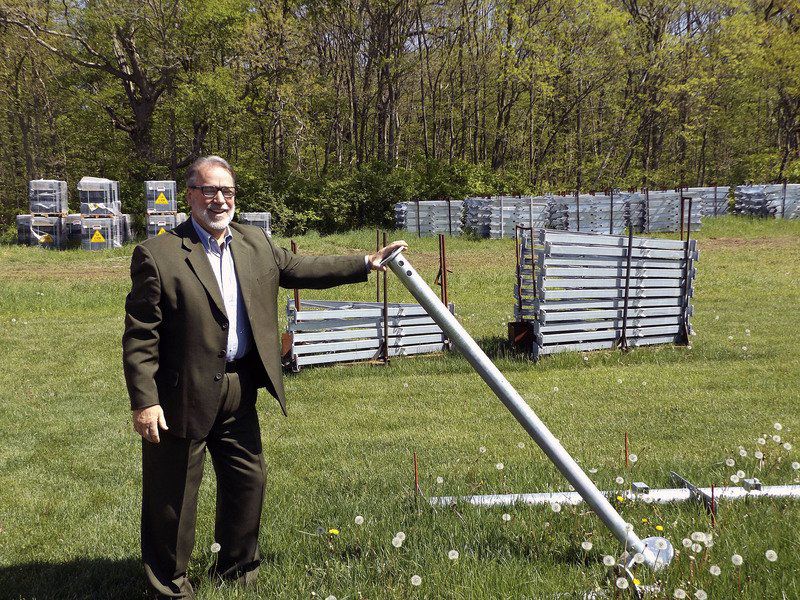 THE GOSHEN NEWS | Denise Fedorow Wawasee Community Schools Superintendent Thomas Edington holds up a pole that will be part of the framework for a solar system array behind the transportation building. In the background are stacks of solar panels. The school corporation is converting all its buildings to use solar energy.

THE GOSHEN NEWS | Denise Fedorow Wawasee Community Schools Superintendent Thomas Edington holds up a pole that will be part of the framework for a solar system array behind the transportation building. In the background are stacks of solar panels. The school corporation is converting all its buildings to use solar energy.

SYRACUSE — When budgets get tighter it sometimes calls for creative thinking and that’s what administrators at Wawasee Community Schools engaged in with their decision to bring solar energy to the school system.

Superintendent of Wawasee Community Schools Thomas Edington said, “Because of state funding lagging” they needed “to look at fixed assets and electricity was increasing each year.”

He said about six to seven years ago school officials first looked at wind-powered generators as a possible solution to reduce electrical costs and gain additional funds to be able to pay teachers. But they decided with the height of the wind turbine and its many moving parts that would need maintenance, to drop that idea.

“It wouldn’t have been economically feasible to maintain,” Edington said.

So, school board members started researching solar energy for their five schools and the transportation building.

“Even though what we do is educate children, we want to be able to actually pay our teachers a living wage,” Edington said.

James Flecker, director of personnel and legal services for Wawasee Community Schools, said the total cost of the project is $6.5 million, which includes six years of operation and maintenance. The school corporation sold bonds to pay for $5 million of that cost. The solar project was also eligible for a 30 percent tax credit. “Except the credit is not available for not-for-profit organizations and school corporations” he said.

So Flecker contacted some people who would be interested in taking the tax credits, which enabled the school board to get the other $1.5 million it needed. The school corporation contracted with Collective Sun, which works exclusively with non-profits to fund their solar projects and offers a variety of funding options. Collective Sun contracted with Ag Technologies of Rochester to provide the solar panels and D&D Electric, Etna Green.

Jim Straeter of Ag Technology, said the system the corporation has is called SolarCam and the panels have a patented system where the panels are tilted four times a year to follow the sun and maximize the energy gathered. The system has top quality Q cell panels, Enphase micro inverters and custom made stands made for Ag Technologies by Craig Welding and Manufacturing in Mentone. The framework stand with its pier and anchor system can withstand three times the force of a 90 mph wind, according to Straeter.

The Enphase micro inverters will continue to operate even if some of the cells go down. The Enphase monitoring system puts all of the system’s information on the Internet, receiving data from each micro-inverter on a real time basis. The Enphase manager provides data, including AC voltage, DC voltage, frequency, temperature and more graphs and numerical data that can be monitored by Ag Technologies personnel from their Rochester office and by school personnel from anywhere.

Straeter explained they can monitor every cell in every panel and see the daily watt hours generated. The system is guaranteed to be 90 percent efficient and if any part of the system isn’t producing 90 percent in the next six years, Ag Technologies will repair or replace it.

The system has a 25-year warranty on the panels and micro inverter. Straeter said even on cloudy days the solar system converts ultraviolet rays.

Straeter said since he started working with solar systems in 2012 the systems have improved from 235 watts then to 325 watts now. But he said the cost of the systems are about half of what they were in 2012.

ON THE GRID NOW

The school system is served by two electric utilities—Northern Indiana Public Service Co. and Kosciusko REMC. NIPSCO, as a public utility, has to offer net-zero credit. Wawasee Middle School, North Webster Elementary School and Milford Elementary are all served by NIPSCO. So if their systems are producing 100% energy and only using 50-60% they put the extra energy “on the wire” and build up credit.

Straeter said that NIPSCO will give the school corporation credit and account for any of those days that the system is not at 100%.

The high school, Syracuse Elementary and the transportation building are served by Kosciusko REMC, which is a cooperative and has different rules, so it does not offer net zero credit.

Ag Technology just began installing the systems and Straeter explained the installation is done in steps. The system for the transportation building and high school should be completed this month. The Wawasee Middle School and Milford Elementary systems will be installed over the summer.

Edington said the school corporation spends approximately $45,000-$50,000 a month for electricity. He said with flat state funding and a lot of rural districts losing students, “As a function of that we’d have no increase for the next two years. The only way to do raises was to lower expenses.”

In addition there could be an educational component as well. Flecker said, “A Science teacher can use the program to show students how it works and students can learn how solar energy works.”

Edington said installing solar systems in schools is slow but growing. Warsaw Community Schools and Tippecanoe Valley School systems added solar energy about a year ago, according to Edington.

When asked if they heard any feedback from the community Edington replied, “The only feedback I’ve heard is positive. (People) know this is the way of the future and feel it can teach kids about the future.”

Flecker said, “If there were any issues we probably would’ve heard about it during the public hearings.”

Starting next school year the school corporation should see big savings, according to Straeter, but he said there will be some immediate savings as soon as the system becomes operational.