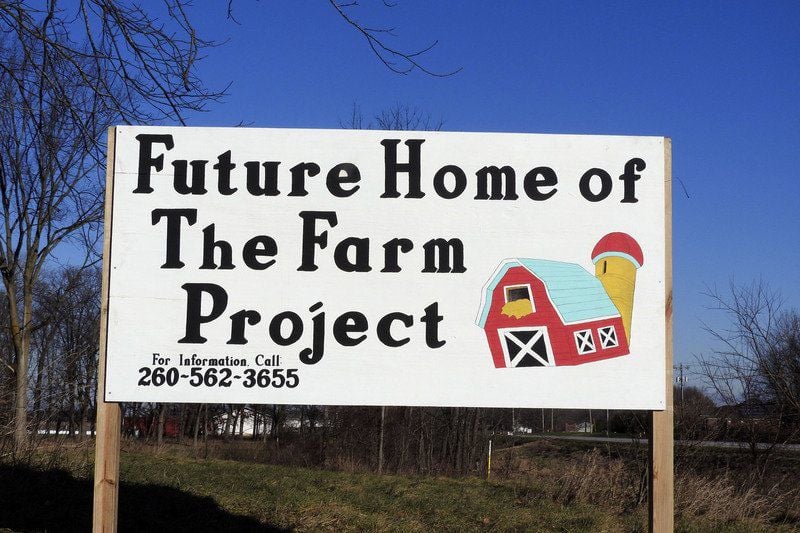 PHOTO CONTRIBUTEDThis site near LaGrange is the future home of The Farm Project. 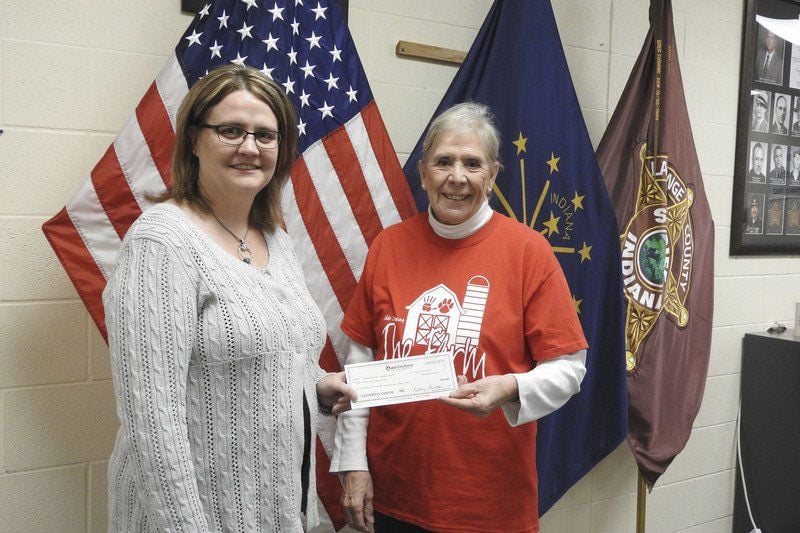 PHOTO CONTRIBUTEDAngie Kresse of United Way, left, shares a check with Margaret Malone of The Farm. Kresse said, “Our board feels it is a good initiative, it serves a need in our community. We are hoping we will be able to establish a partnership with The Farm and the services it will provide”. For more information about The Farm and ways to help, contact 260-562-3655.

PHOTO CONTRIBUTEDThis site near LaGrange is the future home of The Farm Project.

PHOTO CONTRIBUTEDAngie Kresse of United Way, left, shares a check with Margaret Malone of The Farm. Kresse said, “Our board feels it is a good initiative, it serves a need in our community. We are hoping we will be able to establish a partnership with The Farm and the services it will provide”. For more information about The Farm and ways to help, contact 260-562-3655.

LAGRANGE — A child wakes up in the middle of the night to see his or her parents taken away in handcuffs. Strangers try to explain the situation to the child, but the child already knows. Years of substance abuse and even physical abuse have led to this point.

The child watches as mom and dad are placed into a police car. They watch as more people enter their home and take their family dog, the last remaining member of the family — the only family they’ve ever known — away, to a “safe place.”

They don’t know what’s going to happen to them, or their parents, or their dog, but they do know they are alone. Regardless of the suffering they felt before, being alone is scary for a child.

“These kids have fallen through the cracks,” Margaret Malone, founder of The Farm Project, said.

In 2016, a group of concerned residents began meeting to look for solutions to help these children.

Enter “The Farm” — a place where children, who are suddenly without parents due to an arrest, can find comfort among the animals.

Children of parents who suffer from substance abuse or face physical abuse and neglect themselves, have many concerns about the future, the most prevalent being a lack of trust in other humans, Malone said.

The Farm project, she explained, is based on the premise that children will relate to an animal when they can no longer relate to humans.

This is not a new concept, she added. Courtrooms around the country have begun allowing therapeutic dogs to enter so that children have someone they can trust nearby.

“We know that having companionship helps relieve some of the hostility the child feels if they can relate to that animal,” Malone said.

The details of The Farm are still being sorted out, she said, but the land has already been purchased through donations from many people and businesses, amounting to $165,000. The group will need even more money to build the barn, the cabin and the house, which will be on the 10-acre plot of land along Ind. 9, south of C.R. 200 North, across the street and slightly north of LaGrange Country Dodge.

“Right now, there isn’t a place that is conducive to making a child feel comfortable,” she explained.

The Farm project seeks to help these children cope with the trauma of a bad situation by allowing them a safe place to work through their problems. There will be a cabin on site for meetings in a neutral place with social workers, foster parents and even birth parents looking to regain custody. Organizers even hope to allow children to visit with their pets that were taken away.

“You can have a place to break the ice,” she explained.

Malone hopes there will also be a house on the property with a foster family living there full time to help care for the small animals, which could include goats, chickens, sheep, dogs and cats.

The goal now is to raise an additional $200,000 to begin the building process, hopefully by spring, Malone said.

“It’s a challenge, but it’s a worthwhile project and we have faith that, with everyone’s help, we can get it done,” she said.

For more information about The Farm Project, call Margaret Malone at 260-562-3655 or visit The Farm project online at www.thefarmprojectinc.weebly.com.

It is estimated by the Department of Child Services that 11 percent of children in Indiana have dealt with parents behind bars at some point in their life.

In LaGrange County alone, the Department of Child Services has estimated that 1 percent of children are abused or neglected. The number increases to 7 percent when DeKalb, Noble and Steuben counties are included.

GOSHEN [mdash] Andrew Eversole, 66, of Goshen, died unexpectedly on Thursday at home. Visitation is 2 to 4 and 5 to 7 p.m. on Monday at Miller-Stewart Funeral Home and one hour prior to 10 a.m. funeral service Tuesday at Fairhaven Mennonite Church.

MIDDLEBURY - Gregory A. Packer passed away July 14, at the age of 71, at his home in Middlebury. Greg was proceeded in death by his parents, Oscar and Ann (Bates) Packer and two sons, Bradly and Ken Packer. Surviving are two daughters, Jen and Jami Packer; seven grandchildren; three great-gr…