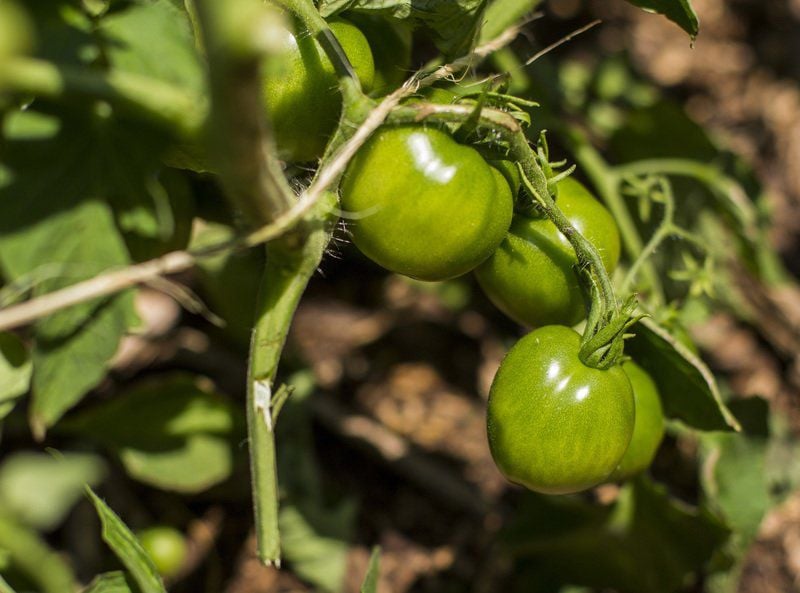 JAY YOUNG | THE GOSHEN NEWSTomatoes grow in the sunshine at Red Oak Farm in Elkhart. 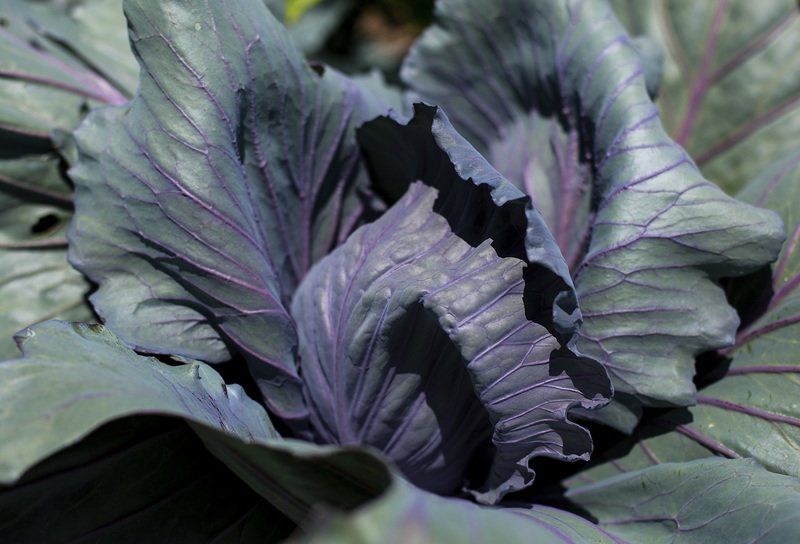 JAY YOUNG | THE GOSHEN NEWSCabbage is just one of the dozens of varieties of vegetables that are grown at Red Oak Farm in Elkhart. 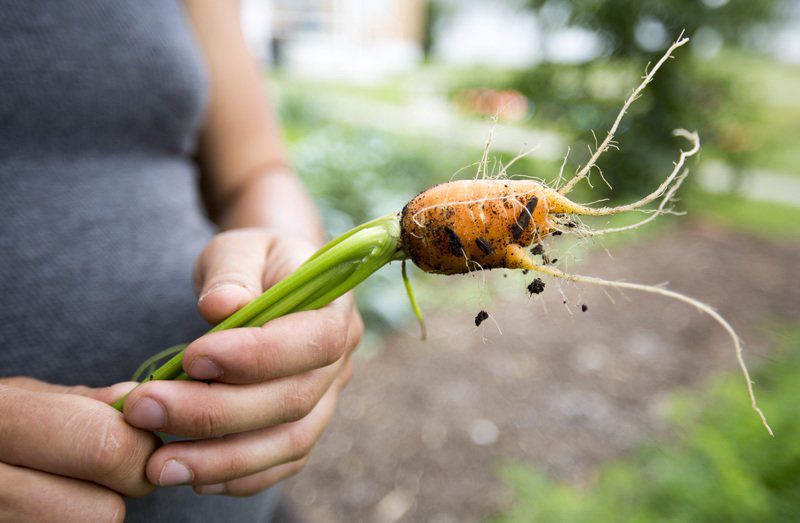 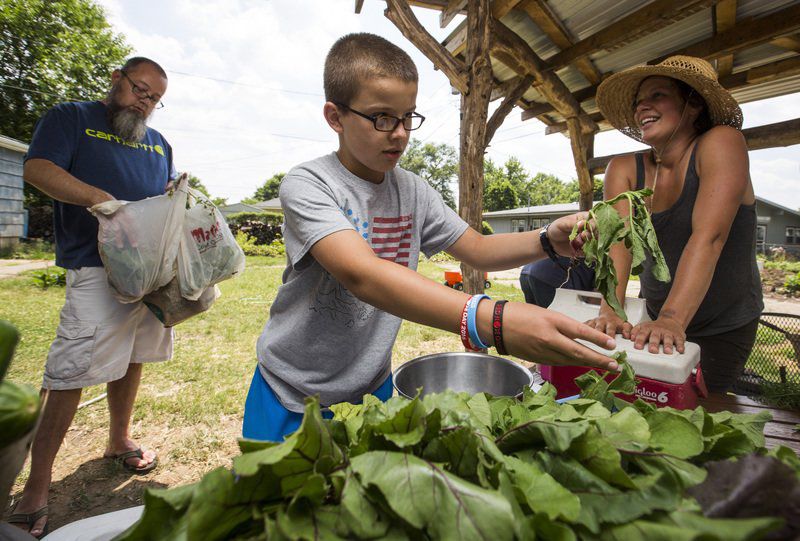 JAY YOUNG | THE GOSHEN NEWSEleven-year-old Sam Schweinzger picks out fresh radishes while his father, Bill, both of Elkhart, waits and chats with Nicole Bauman Thursday afternoon at Red Oak Farm in Elkhart. 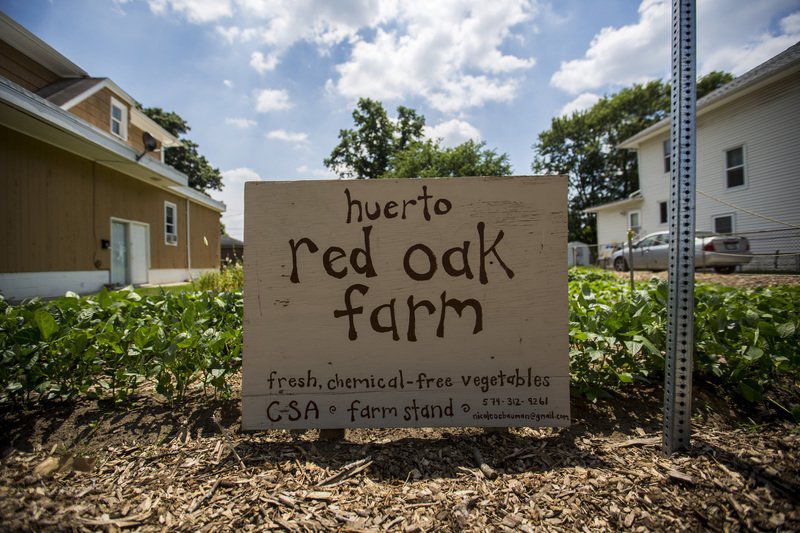 JAY YOUNG | THE GOSHEN NEWSSitting between a pair of houses, this vacant lot on Cleveland Street in Elkhart was transformed into Red Oak Farm. 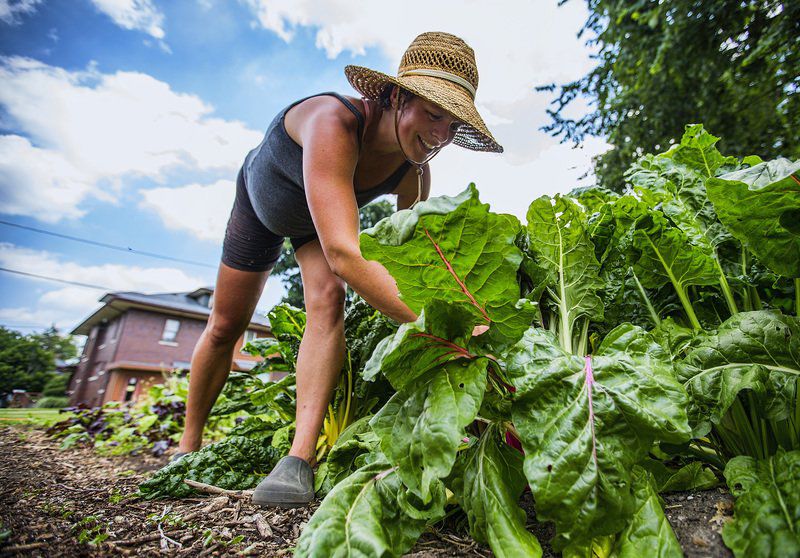 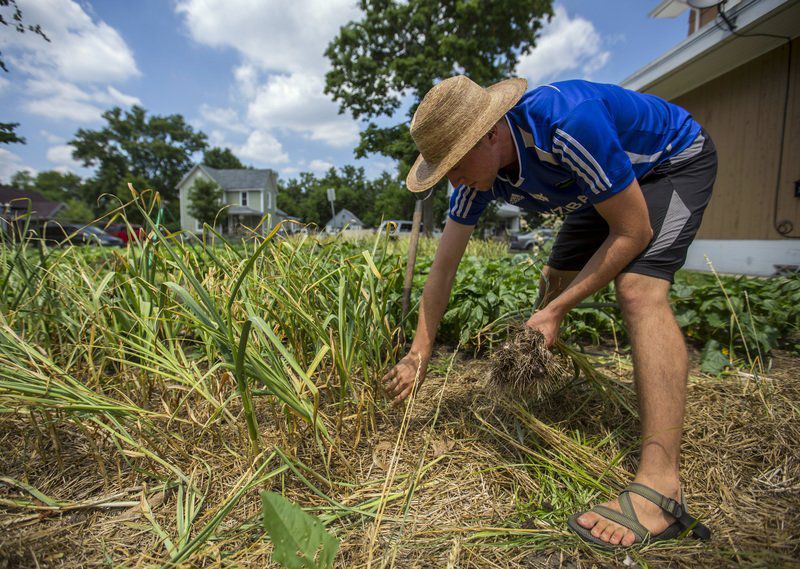 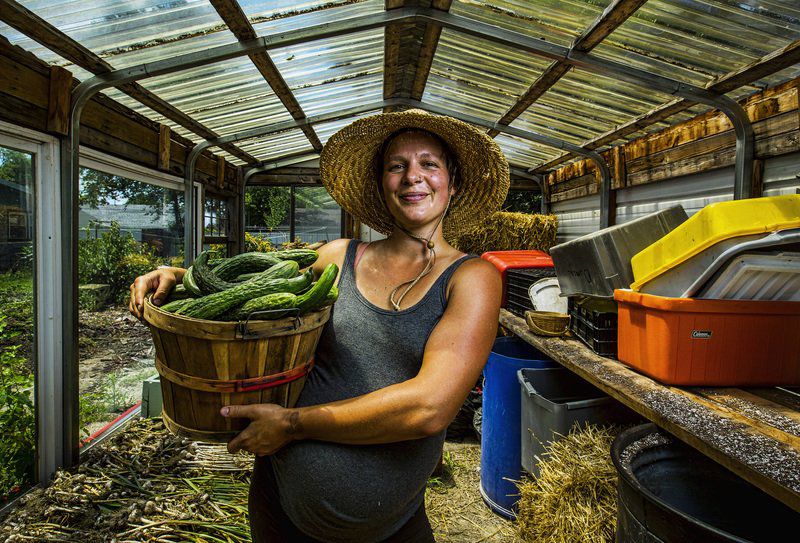 JAY YOUNG | THE GOSHEN NEWSTomatoes grow in the sunshine at Red Oak Farm in Elkhart.

JAY YOUNG | THE GOSHEN NEWSCabbage is just one of the dozens of varieties of vegetables that are grown at Red Oak Farm in Elkhart.

JAY YOUNG | THE GOSHEN NEWSEleven-year-old Sam Schweinzger picks out fresh radishes while his father, Bill, both of Elkhart, waits and chats with Nicole Bauman Thursday afternoon at Red Oak Farm in Elkhart.

JAY YOUNG | THE GOSHEN NEWSSitting between a pair of houses, this vacant lot on Cleveland Street in Elkhart was transformed into Red Oak Farm.

ELKHART — It’s confining to describe Red Oak Farm as a farm as this urban ag operation is more than planting and harvesting.

Nicole Bauman is one of six adults who live in two houses on a large city lot at 1721 Prairie St. The group of friends who call themselves the Prairie Wolf Collective due to nearby street names, divides tasks among themselves. Bauman’s task is to operate the farm.

The “farm” consists of an adjacent vacant lot that is leased from the city of Elkhart. That lot of less than 1/8th of an acre produces all sorts of vegetables and herbs for community-supported agriculture members who arrive each Thursday to fill bags and boxes. The members purchase a share in the garden in the spring and then are entitled to a box full of produce each week.

The shares can even be purchased by people using food stamps.

So far, 14 people have purchased shares this year, according to Bauman. She has several more shares available on a pro-rated basis because the garden is very productive this year.

Fresh produce is also available for purchase by the public each Thursday afternoon when the supply allows.

Such small-scale urban food producers are part of the community-supported agriculture movement that has popped up in the nation’s urban centers, according to Bauman.

“We are trying to do a little bit of intentional community and experimenting with different sustainability practices,” she said. “And trying to be connected in this neighborhood where there is a long history of organizing and community building.”

Bauman reaches out to the community by holding occasional classes on food preservation and canning. This fall, she will provide educational sessions for students at the nearby Roosevelt Elementary School. The Prairie Wolf Collective is also working on lead paint abatement projects.

Some of Red Oak Farm's neighbors have become good customers.

Kathee Kirchner lives just down the street. You can see her front porch from the collective's front yard.

“You can’t get any fresher than this,” she said of the greens she was placing in bags.

Kirchner pointed out that Bauman raises exceptional okra, which she likes to share with friends.

Kirchner said she used to get organic produce from another local farm, but that business stopped its delivery service, so she found Red Oak Farm a few doors from her home.

Organic food is a staple in Kirchner’s diet, and she enjoys Red Oak’s vegetables and herbs while they are in season.

“There was a lot of love put into it,” she said of the farm.

Out of season, Kirchner said she turns to organic foods she finds in local markets.

“There are some market chains where we can get organic food from, but it’s just not the same,” Kirchner said.

“The other aspect of that is I love supporting the horticulture in the community,” Kirchner said. “Having a farm in the neighborhood. Jason (Nicole’s partner) and Nicole do everything they can to conserve resources and to share with people in need.”

This is Bauman’s second season of gardening on the property. Before that she was employed at another local organic farm.

Organic growing is something Bauman has experience with, having grown up on a small Ontario, Canada, farm that specialized in organic products. She sold microgreens to restaurants when she was in high school.

She said Red Oak Farm is not certified as an organic producer because the cost is prohibitive for such a small producer, but the practices used are totally organic.

For instance, her technique for controlling cabbage beetles is to plant small plots of the garden staple and then patrol the plants daily and pick any bugs off by hand. She said, so far, she has only lost one small planting of tomatillos to an insect infestation.

She foregoes the use of pesticides, even those concoctions gardeners mix up themselves or purchase from suppliers of organic products.

“Even that will harm beneficial insects,” Bauman said. “Like pollinators. So I just keep trying to build my soil. The healthier your soil is the healthier your plants are and the less the bugs are going to harm them.”

The community-supported agriculture movement is ideal for small ag operations such as Red Oak Farm, according to Bauman.

“People can go to the grocery store and buy a whole lot more for the same amount of money than purchasing here,” Bauman said. “Which has to do with farm subsidies, which is why that food is really cheap and also is not the same quality. Yes, it is a challenge for sure.”

For small food-production operations like hers, Bauman said she can’t afford to subsidize the cost of food for her customers as she is barely making minimum wage now. So she relies on the her payment plan through the CSA program to make it easier for people to purchase her fresh produce.

She is also optimistic that local low-income residents will see the value in Red Oak Farm products.

“It is an opportunity for there to be truly fresh organic produce right here,” Bauman said. “I am set up to accept SNAP benefits, often called food stamps, WIC vouchers and seniors farmers market nutrition program vouchers. So people on those programs can come and purchase stuff.”

Eight years ago the city of Elkhart demolished a vacant house at where the garden is now, Bauman said. She believes Red Oak Farm’s repurposing of the lot is sending a positive message to the south side neighborhood.

And people in the neighborhood seem to have noticed the garden, according to Bauman.

“I have experienced a lot of community building around it to,” she said. “By being out here all the time I get to know our neighbors better. ... I see neighbor kids and they stop by to see what I am doing and try a radish or a carrot. It builds a lot of connectedness.”