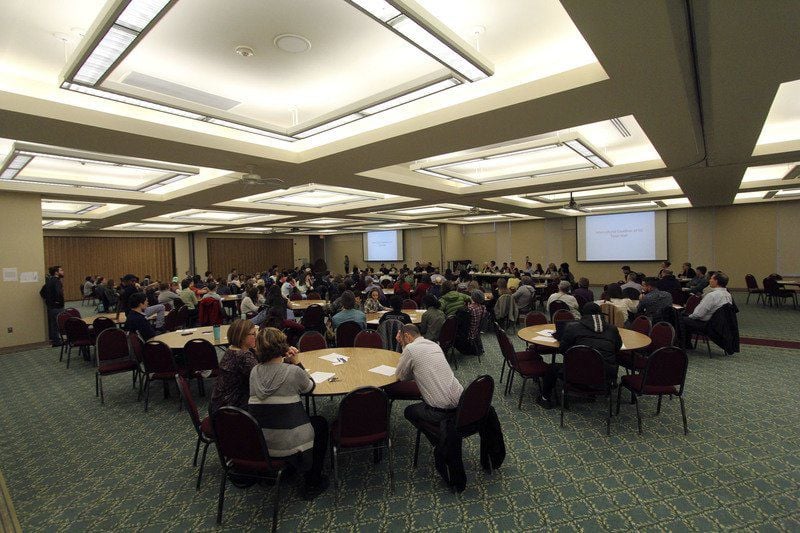 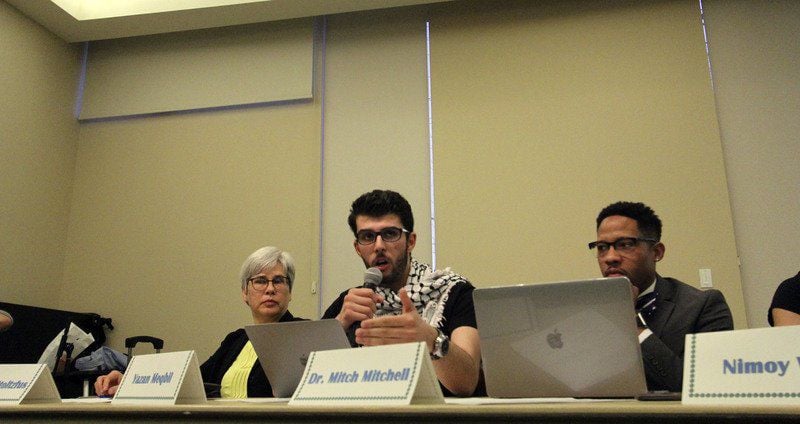 GOSHEN — Change may be coming to Goshen College’s policies regarding race and diversity.

The ICGC presented the school’s president, Dr. Rebecca Stoltzfus, with multiple requests during a chapel walkout March 21 wherein students asked administrators to address the issue of racism on campus.

“The Intercultural Coalition of Goshen College (ICGC) was started by a group of students who were tired of feeling like they did not belong on campus due to the color of their skin,” junior Alia Byrd said as students gathered March 21 at the Adelphian Fountain on campus.

“They are tired of seeing the college sell diversity to prospective students, only to not deliver what was paid for. … They wanted to see a campus that didn’t just ignore racial issues because they have this many Latino, Black, Asian, etc. students, so they must be diverse, right? ... We want to hold administration responsible for the things they say they are going to do."

That rhetoric carried forward to Wednesday's meeting as students called for administrators to "deal with" the situation.

ICGC asked that the requests included in "A Resolution to Reform the Goshen College Policies on Diversity and Race" be implemented by the fall 2018 semester, a timeline Stoltzfus called “ambitious.” Wednesday’s meeting served as a chance for the administration to respond and students to expound upon their requests and concerns.

“It’s not just a conversation, because I am, we — all of us are — sick of just having conversations and talking,” ICGC member and panelist Yazan Meqbil, a junior from Hebron, Palestine, said during the discussion.

In referencing a story he’s shared “multiple times,” Mequil described being “racially assaulted” on campus, an incident he said was “the worst experience I’ve ever had.”

“To my knowledge, it was verbal,” ICGC member Elijah Lora said of Mequil’s experience, following the meeting. “It was putting fear on that person and threatening them.”

Lora added of the group’s origin, “We talked about these problems and we came together and decided with the resolution these are certain things we need to deal with. So it was in response to that incident, but also looking at all the incidents before that.”

Of the requests, mandatory anti-racism training for professors, coaches, teachers’ assistants, “student leaders” such as student-athletes and student-government members, and anti-racism training within in the school’s Identity, Culture and Community curriculum were the first addressed by Stoltzfus in her closing remarks.

“In terms of the anti-racism training, we had a number of discussions of how to make this possible,” she said. “The ambitious timeline is around the decision-making that has to happen, and all the people who are going to participate and need to participate in that decision we need to make it effective. So there are many decisions to be made to pull this off, but I agree with you, it is possible. …”

Another ICGC request was for the campus to have “student representation in meetings with the Racial Misconduct Team for matters of transparency. Campus will provide the annual publication of the racial misconduct report and will make any racial-related incident with the same severity as a student conduct violation.”

Without offering a solid funding proposal, the ICGC also asked for the creation of a director of diversity, equity and inclusion position within school’s administration, a staffing concern Stoltzfus said she supports and will be discussed in official conversation “in a timely fashion over the next few months.”

“We want the racial misconduct team to have the same weight as the sexual misconduct team has on campus,” Lora said during the discussion. “And all the student representatives on this team will be reporting to the director of diversity, equity and inclusion.”

In response, Stoltzfus said, “… We will look into having a student on that team. I think both Gilberto and I are positive on that, to think more deliberately about reporting, to think about an annual racial climate and progress report that is actually discussed, and that we assess how we’re doing on this, and mutually hold one another accountable to what we have committed.”

Of the request for an intercultural resource center, Stoltzfus continued, “We have discussed the space and there is no immediate solution, an immediate action on that, except that we have ongoing conversations. … We are hearing your need for more supported space.”

In closing remarks, Meqbil said the ICGC would return to the administration in the fall “to make sure everything was implemented.”

“One of the main reasons why we’re doing this is to hold everybody accountable,” he said.

Below is a copy of the ICGC’s resolution:

WHEREAS, Goshen College has an ongoing commitment to supporting diversity and students of color; and WHEREAS, Due to ongoing complaints regarding a lack of racial awareness, the coalition of Intercultural Students has noticed a need to address issues of race and ethnicity on campus; and WHEREAS, A reform in college programs addressing issues of race would be beneficial in making campus a more welcoming community; now therefore, be it RESOLVED, That the Goshen administrative body enact the following steps to reform campus policies toward diversity and race:

Section 2. Student leaders, including student-athletes, will receive anti-racism training at the start of the fall semester.

Section 5. Campus will revisit the recruitment process as it pertains to Athletes and International students to increase transparency concerning campus culture.

Section 6. Campus will create an intercultural resource center where minorities and other students can ... .

Section 7. Campus will implement anti-racism training into the Identity, Culture, and Community curriculum.

Section 8. Campus will have student representation in meetings with the Racial Misconduct Team for matters of transparency.

Section 9. Campus will provide the annual publication of the racial misconduct report and will make any racial-related incident with the same severity as a student conduct violation.

Section 10. Campus will create a common reading experience for GC faculty to read and discuss issues of race together. gather to promote a common community.

Section 11. These revisions shall take effect in preparation for the 2018 fall semester.

Section 12. All policies in conflict with this resolution are hereby declared null and void.