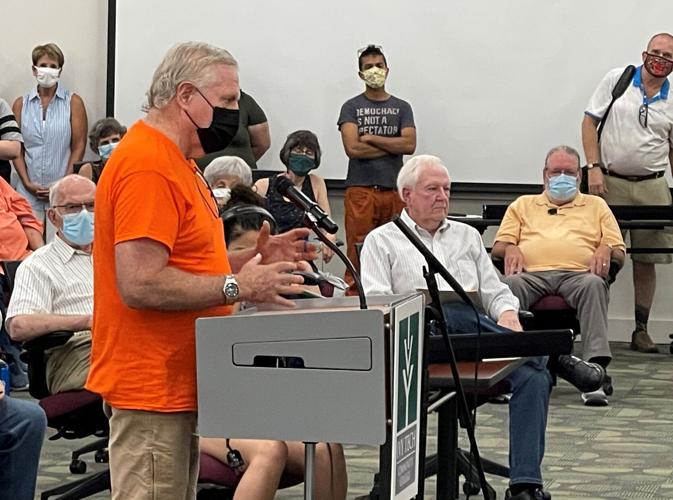 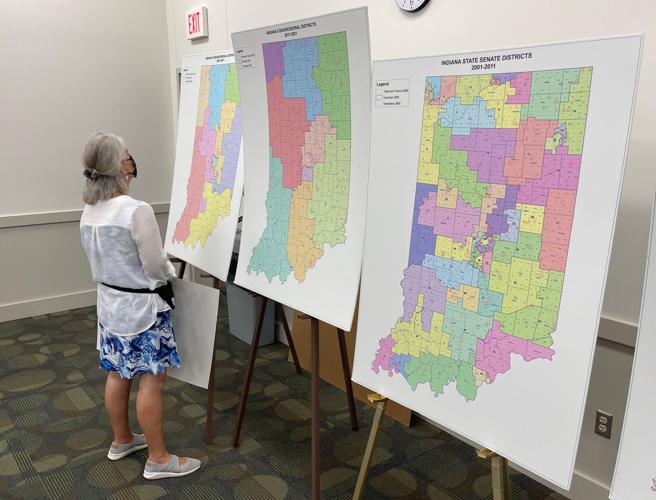 Michelle Livinghouse, of Plymouth, looks at congressional and legislative district maps during a public meeting to discuss redistricting at the Ivy Tech campus in Goshen Saturday afternoon. 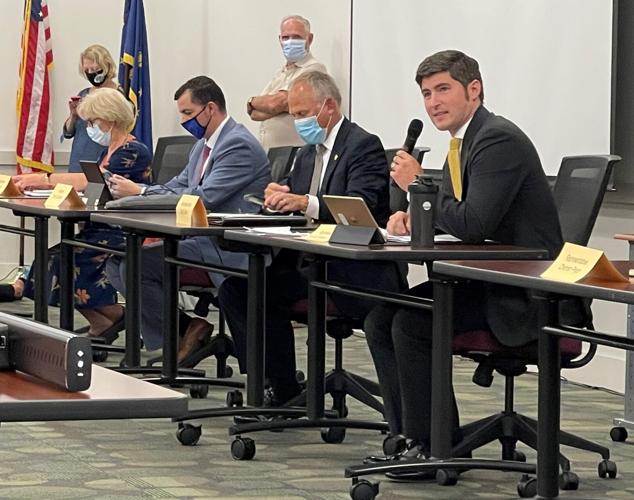 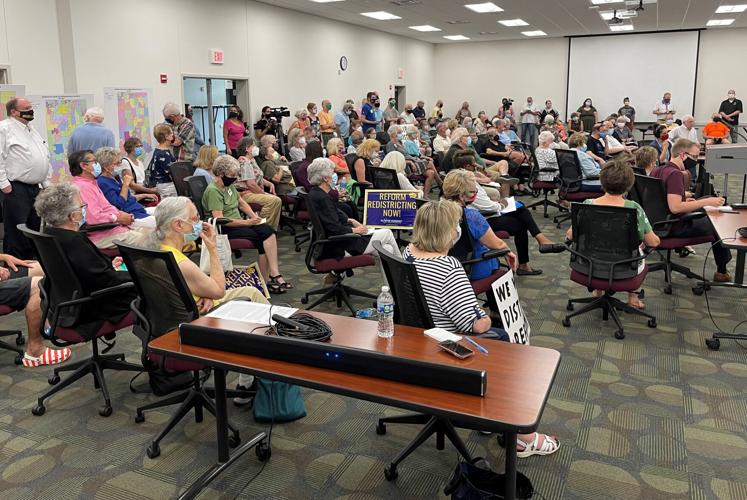 A standing-room-only crowd fills the Community Room of the Ivy Tech campus in Goshen Saturday afternoon during a public meeting aimed at gathering feedback related to the state’s current redistricting process. 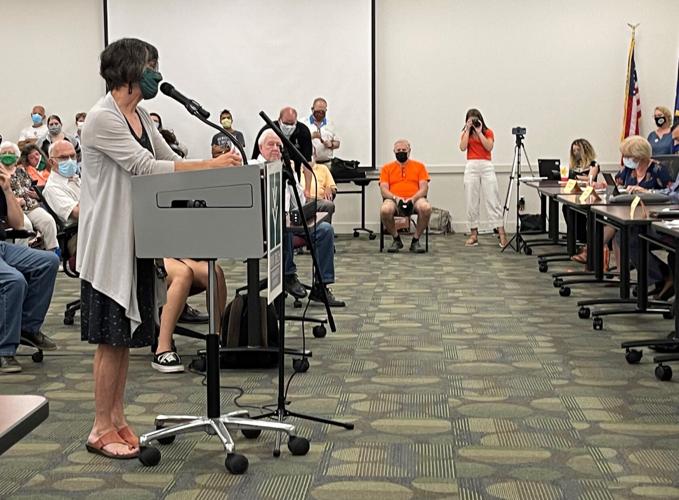 Michelle Livinghouse, of Plymouth, looks at congressional and legislative district maps during a public meeting to discuss redistricting at the Ivy Tech campus in Goshen Saturday afternoon.

A standing-room-only crowd fills the Community Room of the Ivy Tech campus in Goshen Saturday afternoon during a public meeting aimed at gathering feedback related to the state’s current redistricting process.

GOSHEN — A standing-room-only crowd filled the Community Room of the Ivy Tech campus in Goshen Saturday afternoon as citizens from across northern Indiana gathered to provide feedback on the state’s redistricting process.

While the Indiana General Assembly initially planned to address redistricting in the spring, delays at the U.S. Census Bureau due to the COVID-19 pandemic have pushed the expected arrival date of the data needed to move forward with the redistricting process to Aug. 16.

Once that data is available, the Republican-led General Assembly will meet to discuss potential changes to the existing districts and ultimately adopt new statewide maps for both legislative and congressional districts.

However, before legislators are expected to return to the Statehouse in mid-to-late September to redraw the district boundaries, public meetings have been scheduled in each of Indiana’s nine congressional districts to gather public input on the redistricting process.

As designed, the meetings have been grouped into geographic areas, including north, south and central Indiana, with Saturday’s meeting at Ivy Tech representing the northern part of the state.

“We want to get peoples’ feedback on how they feel about the maps presently as we go forward and prepare to fulfill our constitutional and statutory obligations of redrawing the districts proportionally to population following the decennial U.S. Census,” Wesco said of Saturday’s meeting. “Then later this month, the official census data will finally be released, and it will take a couple of weeks for that data to be synthesized for the redistricting software. We anticipate, then, having session toward the middle or end of September to pass the new maps, so we’re looking for as much public input as possible in this process.”

Those in attendance Saturday were more than willing to answer that call for input, as more than 30 people chose to provide feedback over the course of the two-hour gathering.

Of those who chose to speak, nearly all voiced concerns that the state’s current redistricting process is moving too quickly, without enough transparency, and urged Wesco and the other representatives in attendance to consider waiting to make any final decisions on the redistricting maps until all of the data has been provided to the public and they’ve been given time to provide feedback on any proposed changes.

By the conclusion of Saturday’s gathering, four key points had come to the forefront regarding the crowd’s suggestions for how best to move forward with state’s redistricting process. They included:

• A desire to see nonpartisan districts that are drawn to encourage competitive elections and not to benefit one party over another;

• A desire to see communities of interest kept together;

• A desire to have the state’s cities, towns, counties and townships divided into as few districts as possible, and;

• A desire for transparency, such as providing the public access to all data used in the redistricting process, having all redistricting proceedings in public, and offering additional public hearings around the state after the proposed maps are released so the public can weigh-in, analyze the maps and provide feedback.

Included among those to share their thoughts on the redistricting process Saturday was Julia Gautsche, a Goshen resident and former member of the Goshen City Council.

“I will just say simply — and I think probably a lot of people will say — it’s important to redistrict so that the districts do not unfairly benefit one particular party,” Gautsche said. “I think they should be contiguous, I think they should represent their communities, and I would encourage you to have a nonpartisan group of community people to look at the census data, and to redraw them in the most fair way possible.”

Allan Kauffman, former mayor of Goshen, noted that while there has been quite a bit of talk of nonpartisan redistricting in the Republican-led Legislature in recent years, such proposals either don’t get a hearing in committee, or they don’t get out of committee.

As such, he said he wouldn’t be surprised if most of those in attendance Saturday felt the public hearings being held to discuss redistricting are just window dressing, and will have little impact on how the redistricting process actually plays out.

Daniel Grimes, also a former Goshen City Council member, said while he believes democracy can be a powerful force, he feels that few people in Indiana actually believe in democracy anymore.

“They believe that it’s a lost cause, that the Legislature doesn’t really care, and that the gerrymandered districts aren’t designed to be representative,” Grimes said, noting that many feel the state’s districts are currently drawn so those in power continue to hold power. “So, my plea today is that there be nonpartisan districts throughout the state, that they be as compact as possible, and that they follow the municipal lines that are already established in a county or township.”

For her part, Janet Evanega, president of the League of Women Voters of Elkhart County, said it is becoming increasingly difficult to get candidates to even participate in league-hosted debates, given that many election outcomes are virtually assured due to the way the state’s districts are currently drawn.

“One of the things that we have, because of these very, very safe, gerrymandered districts, we have a heck of a time getting people to agree to our debates,” Evanega said. “This is such a problem, and it’s just a symptom of the fact that they feel so safe that they don’t have to come and speak at our debates. And, they’re like, ‘What’s in it for me? The only thing that a debate can do now is hurt me, because I’m going to win this election anyway.’ We run into that with so many people that I really hope you can do something about this.”

One of the best ways to go about that, she suggested, is for the General Assembly to be as open and transparent as possible when it comes to the current redistricting process.

“I really think that first of all, you have got to be transparent,” she said. “It’s wonderful that you’re talking to us today, but you’ve got to talk to us after the fact, after you’ve gone behind your closed doors, and after you have drawn your lines. You’ve got to come back, and you’ve got to face us. ... You’ve got to look us in the eye and say, ‘This is why we did this.’ ... We are upset, we’re scared, and we want to have faith in you. We do. But you’ve got to show us that that faith is not misplaced.”