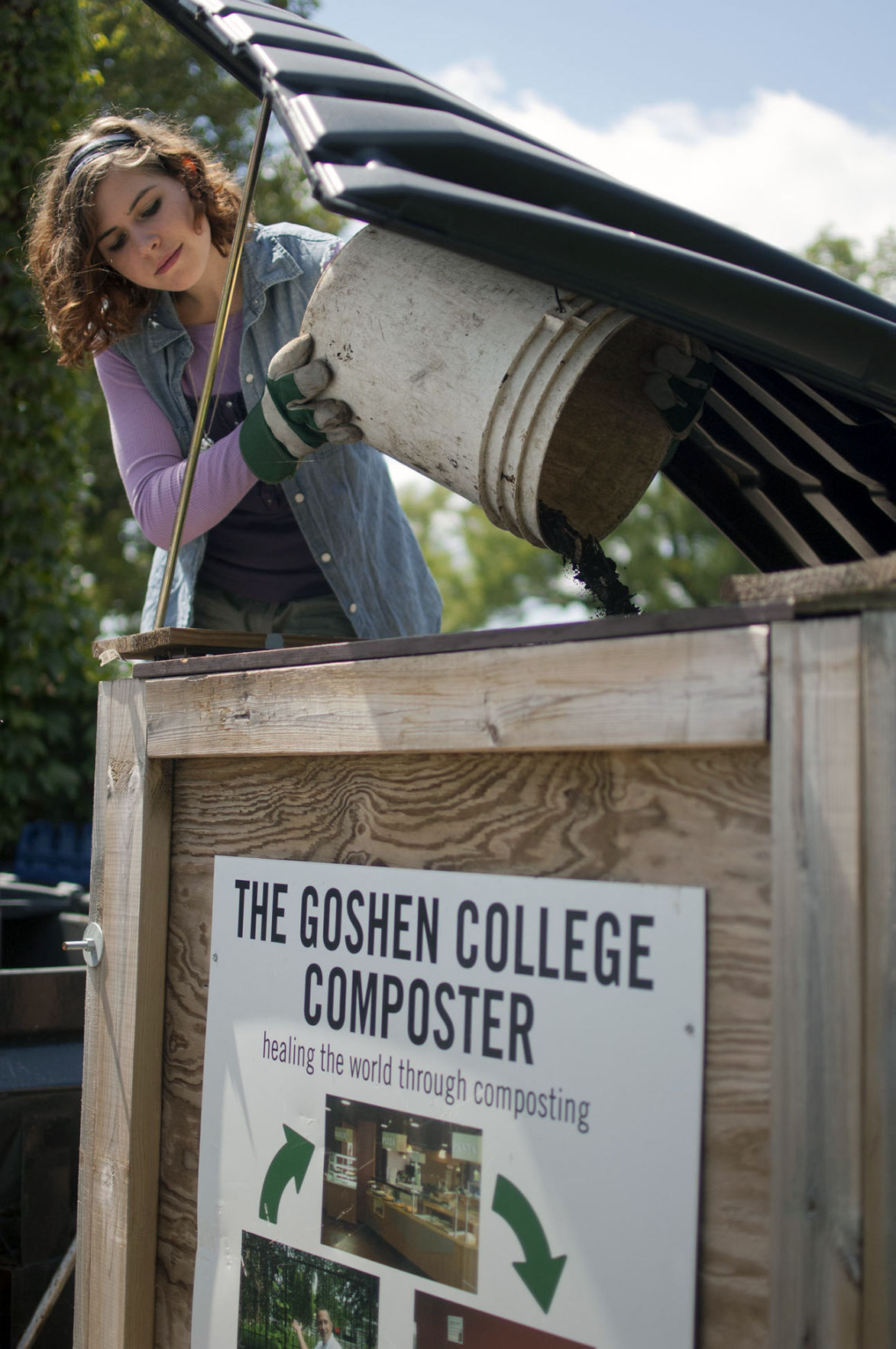 Goshen College student Natasha Weisenbeck (Class of 2014) dumps material into a composting bin at the college in this 2013 photo. A student-driven composting project is one of many sustainability efforts underway at GC. 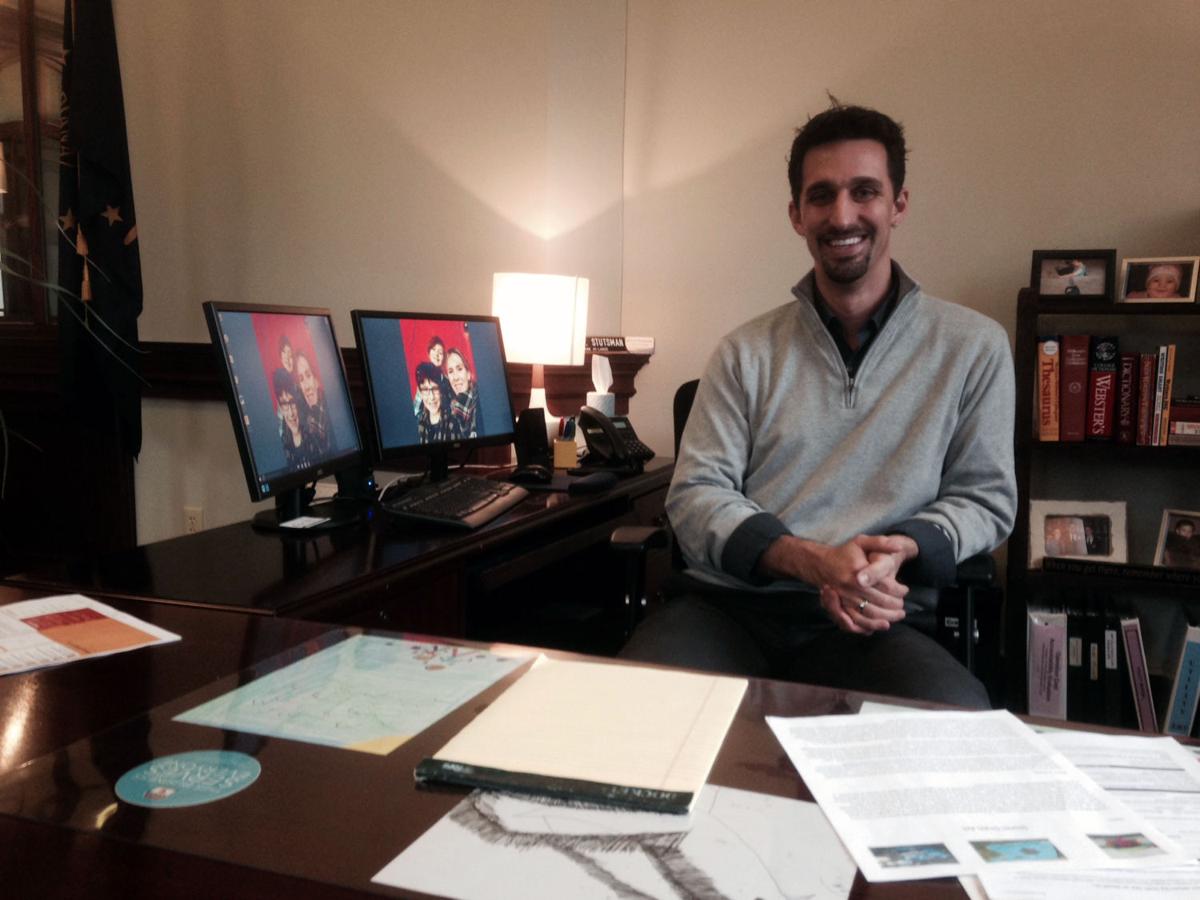 Goshen Mayor Jeremy Stutsman is shown in his office. Stutsman promoted sustainability in his election campaign, and has outlined sustainability-related goals for Goshen. One possibility is a curbside recycling program.

Goshen College student Natasha Weisenbeck (Class of 2014) dumps material into a composting bin at the college in this 2013 photo. A student-driven composting project is one of many sustainability efforts underway at GC.

Goshen Mayor Jeremy Stutsman is shown in his office. Stutsman promoted sustainability in his election campaign, and has outlined sustainability-related goals for Goshen. One possibility is a curbside recycling program.

GOSHEN — For Jeremy Stutsman, the “Why?” of sustainability is easy.

“The future, plain and simple,” Goshen’s newly elected mayor said in his office recently. “My kids. My kids’ kids. …Just to be good stewards and pass on something better, hopefully, than what we have.”

As for the “What?,” we can do worse for simplicity than the definition offered UN Brundtland Commission Report: “Sustainable development is development that meets the needs of the present without compromising the ability of future generations to meet their own needs.”

Talk to Goshen supporters of the sustainability concept and a common theme emerges: looking ahead. For Stutsman, it also involves starting relatively small and simple.

“At the city government level, a lot of the buildings are getting automatic lights put into the bathrooms,” he said. “Simple stuff like that — new switches, shifting bulbs from incandescent to at least fluorescent, if not LED where we can.”

City traffic lights are also being converted to LED, he said.

“Employees shutting lights off when they leave their offices, turning their computers off at night. Some really simple things you can do immediately.”

At the same time, city officials are eyeing potential bigger changes that would require bigger budgets. More efficient furnaces in government buildings are on the list. The mayor is also enthusiastic about recycling.

“Something I’d love to work into the city here in the very near future is finding a way to bring curbside recycling to town,” Stutsman said. “I think that would be absolutely essential. Obviously, that’s one where we’d have to make the budget work.”

Stutsman is also proposing a Goshen Sustainability Board, which would be made up of local volunteers interested in improving the environment. In Stutsman’s view, the board would also take a look at business.

Goshen’s mayor wants the board to set up a program for local contractors and remodelers to voluntarily submit their projects to the city Building Department and, after a review, earn a Goshen Green Building certification. The Green Building designation would be similar to LEED (Leadership in Energy and Environmental Design) certification recognizing building practices that are energy-efficient and have a low environmental impact.

Applying for the certification would cost nothing, and the paperwork would be limited to a one-page checklist.

“It wouldn’t be any new regulation on businesses whatsoever,” Stutsman said. “It’s just recognizing the efforts of businesses that go that far with their own projects.”

Stutsman’s focus on sustainability also has an education component. He’d like the conversation to continue in Goshen about sustainability.

“And not being afraid to talk about those ideas that some people may think are ‘out there,’” he added. “Because even when you’re talking about an idea you might not be able to accomplish, or that most people won’t support, you find creative ways to do something else. Something will come out of that.”

Stutsman isn’t the only one interested in education and discussion. Count local sustainability advocate Paul Steury in that camp, too.

Much of Steury’s teaching career has focused on environmental education; his resume includes a stint as the education coordinator at Goshen College’s Merry Lea Environmental Center, as well as teaching future elementary educators how to work with their kids “on the trail,” i.e. “outdoors.” He also organizes the local “Green Drinks” gatherings where folks talk about issues related to sustainability, and writes the “Shades of Green” column for The Goshen News.

Time living in California around 1990 helped inspire Steury’s interest in the environment and sustainability. At that time, Steury lived in the mountains by Antelope Valley near Lancaster.

“I would drive down into the valley every day, so I would go from pristine blue sky down to brown smog,” he recalled. “And I thought, ‘What can I do to change things?’ I thought, ‘I need to go back and get an environmental education degree and work at teaching kids about taking care of their earth.’”

And that’s what he did, earning a master’s in outdoor resources management with an emphasis on environmental education.

For Steury, sustainability involves people thinking of ways they can lessen their environmental impact. It involves thinking 200 years ahead instead of a couple of weeks or a year. It’s about rethinking consumption and energy usage — and about combatting apathy.

According to Steury, there are relatively easy activities families can do in their households to promote sustainability. Among other things, they can recycle, and compost food waste that would otherwise wind up in a landfill.

“It’s a little bit, a tiny bit inconvenient,” Steury said of those efforts. “If we just give ourselves 15 minutes a week, we could do all these things.”

Steury also suggests buying as much food as possible from the farmers’ market as opposed to a box store. There’s less transportation involved in getting the food to the store, and that means less fuel emissions.

In other words, keep it local. And right here in Goshen, the mayor can cite examples of forward thinking when it comes to sustainability.

Stutsman touted the green efforts of local businesses and institutions. One of those comes courtesy of Everence, a Christian-based, member-owned financial services organization.

In 2013, Everence was certified Gold LEED for the addition to its corporate office at 1110 N. Main St. The project, completed in late 2010, was designed by the architectural firm Arkos Design of Niles, Mich., and built by DJ Construction of Goshen.

Gold LEED is the second-highest certification awarded by the Green Building Council. According to Everence staff, the addition was the first Gold-certified building in Goshen.

“This Everence corporate facility is a dual delight,” said Ken Hochstetler, president and chief executive officer of Everence Financial. “It’s a modern, energy-efficient building that honors our earth and it’s a pleasant place for our Goshen staff to work together for the good of our clients.”

First and foremost, the crew at DJ Construction considers sustainable/green projects to be important because they’re better for the environment.

“We believe it is important to be good stewards of all our resources, and that would include construction projects,” said Matt Schrock, who works with business development for the firm. Schrock also pointed out that many of the practices that used to signify a green project have now become much more available, affordable and in some cases are considered standard operating procedure.

Sustainability is one of building blocks of Adam Scharf’s Rethinking Buildings. The Goshen-based business handles remodeling, design, maintenance, landscaping and other work, and multiple Rethinking projects have fit the green bill.

Scharf said he sees sustainability in building as an approach and skill set, recognizing and utilizing qualities that will make a building last: durability, usefulness and beauty. He also pointed out that for most of human history, people built what they could with what they had — tall tulip trees for log cabins in Indiana, buffalo hides on the Great Plains for teepees, etc.

“In my own work I often use what I call ‘materials-driven design’ in the same spirit as historical builders,” Scharf said via email.

With Rethinking Buildings, this inspiration has led to projects, including Blank Space in downtown Goshen. The starting point was a 140-year-old building in need of maintenance. The design challenge, Scharf said, was fitting modern needs and aesthetics into an old shell — and honoring history in doing so.

“The project, first and foremost, works,” Scharf said. “As for the details, it incorporates trim milled from yard trees taken down from Goshen High School, a courtyard built with reclaimed Goshen street bricks, and hand-cut foundation stones from the old Troyer & Associates Queen Anne house that burned down several years ago.”

Stutsman also highlighted green practices at Goshen College, and he’s not the only one who’s taken notice. The Princeton Review and the Sierra Club have both named GC one of America’s greenest colleges.

For the past several years, the GC community has taken many steps toward reducing its carbon footprint. These include converting 20 percent of lawn space to native plants and prairie restoration, and constructing a solar hot-water collection system for the Roman Gingerich Recreation-Fitness Center. Glenn Gilbert, utilities manager and sustainability coordinator at the college, also pointed out that recycling efforts are “ratcheting up” at GC.

Goshen College is home to a student-driven composting project, as well as the EcoPax environmental club. GC also boasts the Merry Lea Environmental Learning Center, 1,189-acre natural sanctuary near Wolf Lake. In 2007, buildings at the Merry Lea site were the first in Indiana to be certified LEED Platinum.

That same year, GC President Jim Brenneman signed the President’s Climate Initiative, committing the college to climate neutrality. Gilbert views the signing as a turning point for sustainability at the college.

“(That) kind of had a trajectory for us to do some intentional work at reducing our carbon footprint and consequently work on sustainability,” he said. “That’s not to say we weren’t doing anything before. We certainly had been for many years.”

GC offers academic programs focused on sustainability, and ecological stewardship issues factor into other curricula as well. Jonathon Schramm, an assistant professor of sustainability and environmental education at Merry Lea, identified key lessons Goshen College students hear about sustainability, regardless of their major.

“First, (sustainable) choices are a personal moral imperative and for Christians, should be a part of our daily ethical approach to the world,” Schramm said. “Second, they hear on many occasions that institutions like the college can also make choices that are more or less sustainable. … And third, I think that in more and more ways, students are learning that regardless of the field of work they are heading into, sustainability thinking is going to be pertinent, and will be fertile grounds for collaboration in every area of work.”

In terms of sustainability in action, Schramm views local approaches as crucial. One reason is that “local” is the level at which all of us live, and is the arena where we contribute to either problems or solutions.

“We can march for climate action in New York or D.C., for instance, as millions of folks have recently, and that does pressure the powers-that-be to notice a demand for action,” Schramm said. “But without the more intricate and creative work of building sustainability here, those actions aren’t enough.”

Local action is part of Jeremy Stutsman’s approach. He also recognizes a need to take in the broad view.

“You’ve got to step back and look at the overall picture once in a while and see what’s going on.”

ABOUT THE AUTHOR: Scott Weisser is a veteran freelance journalist who worked 20 years at The Goshen News. He is a native of Milford and graduate of Wawasee High School.