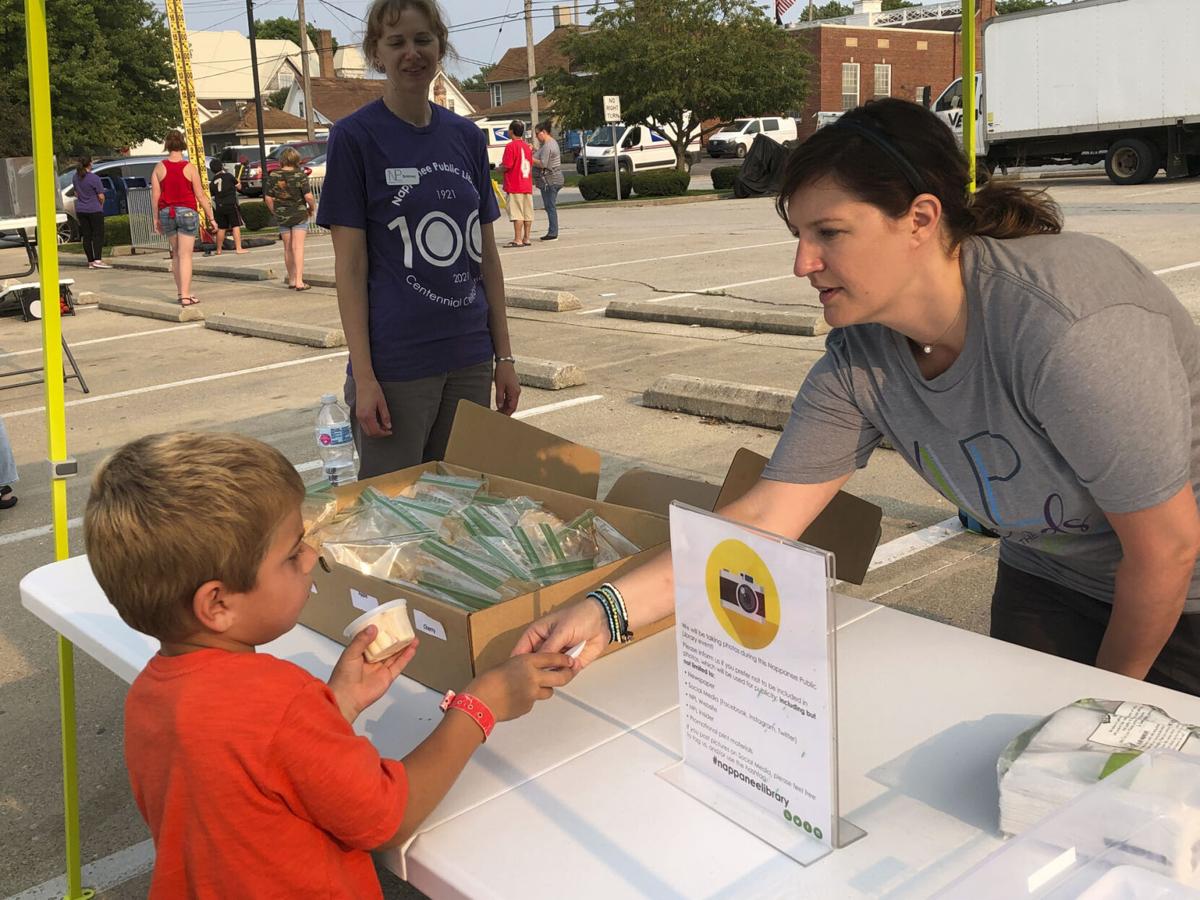 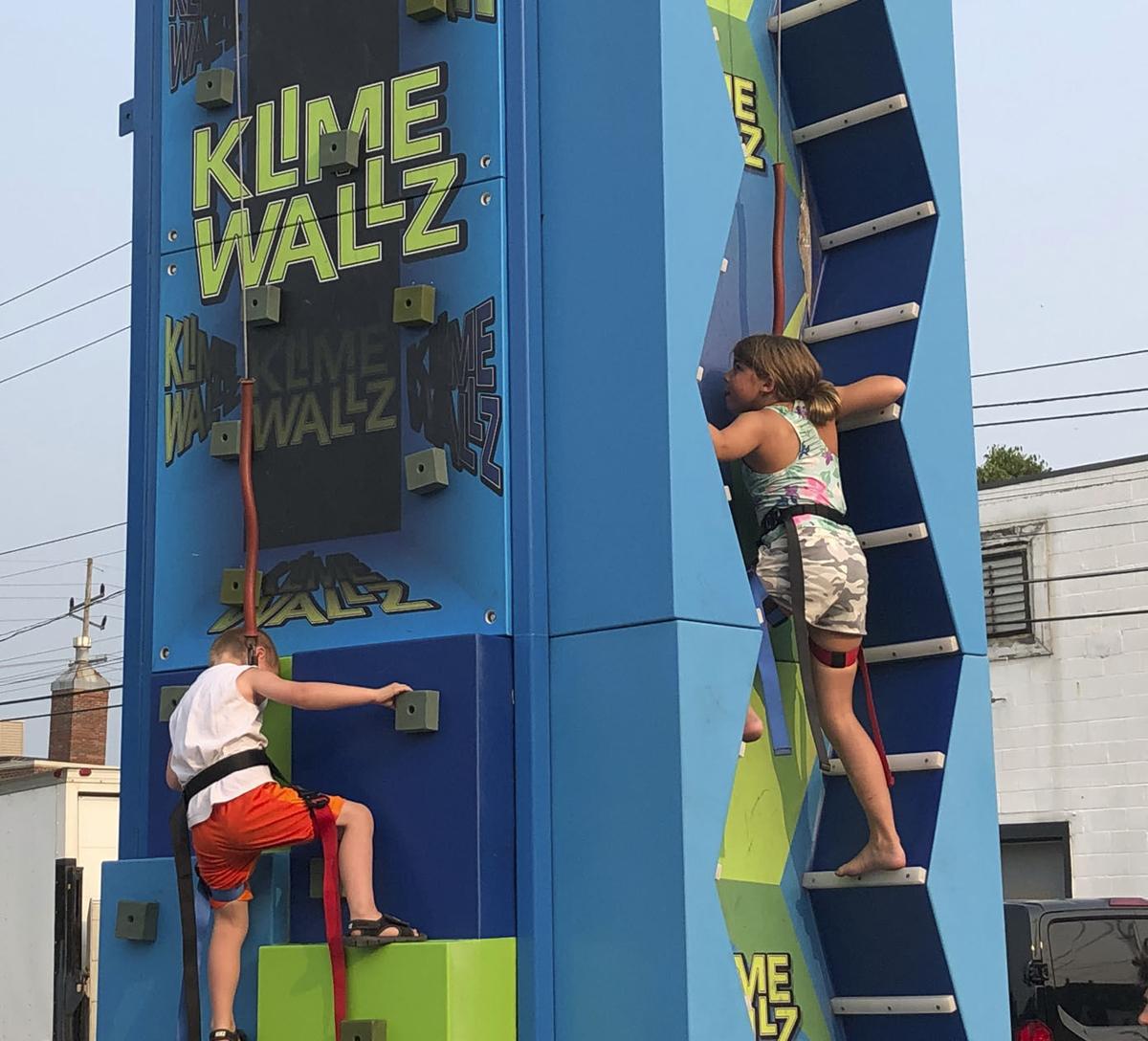 Four-year-old Jensen Harrold, at left, and Natalie Mattern descend the rock wall set up at the celebration on Monday evening.

Four-year-old Jensen Harrold, at left, and Natalie Mattern descend the rock wall set up at the celebration on Monday evening.

NAPPANEE — Community has always been a main focus for Nappanee Public Library staff and board, and Monday they hosted a block party style open house to celebrate the library’s centennial.

Nappanee Public Library Director Jason Fields said the actual anniversary was February 5, but with the pandemic they couldn’t do much so they decided to celebrate in small ways all year long, culminating in the community celebration Tuesday.

The library parking lot was transformed into a mini-carnival with a dunk tank, rock wall, high strikers ring the bell game, corn hole and musical entertainment. Holy Smokes BBQ & Kona Ice were on hand for concessions and the Friends of the Library were giving out fried pies and ice cream and centennial book bags.

Visitors to the event were also encouraged to participate in a new time capsule by sharing memories of the library that would be added to the time capsule.

“According to our resident historian, Martha (Owens) there’s a time capsule in the original cornerstone but it can’t be opened until the building is demolished so I had the idea of doing another time capsule to be opened in the next 100 years,” Fields said.

He said they’d seal the capsule later this year and buy a plaque that will say when it should be opened.

In 1916 the Thursday Club, a woman’s group, organized an art exhibit and raised $31.50 that they gave to start a fund for a public library in Nappanee. Other fundraisers were held over the next couple of years, according to information from the library.

In 1919, Belle Stauffer decided despite many discouragements Nappanee should have a library and obtained “enough signatures”. The first library board was formed and met for the first time on May 6, 1919. Charles Miller, Myrtle Rickert, Claude Stoops, Jacob Hartman, Nora Shively, N.A. Lehman and Bessie Brown were the first library board members. In 1920 residents raised enough money to purchase a property on the southeast corner of North Main and East Walnut Streets for $9,500. The house would be the first home for the library.

In September 1920 the library board held a book shower and brought in over 500 books. They hoped to open Oct. 1, 1920 but the first librarian, Rachael Stier from Aurora, wasn’t available until January 1921. The Nappanee Public Library opened its doors Saturday, Feb. 5, 1921, at 10 a.m. 200 children attended the first story hour. Eleven-year old Harold Reprogle was the very first registered borrower and by end of the day there were 231 registered borrowers.

The library board then began fundraising for building a library building. Library Board Member Claude Stoops went to New York in 1921 to see if Nappanee would be able to receive funding to be a Carnegie Library but found out the Carnegie fund had changed focus to help with the war effort. He reportedly returned confident that Nappanee would be considered if they decided to fund libraries again.

In 1936 the library received a grant for $15,728 from the Public Works Administration and with that grant and other funds raised were able to build the 1936 library building. The cornerstone was set on December 14 with a “copper coffin” placed inside that included the history of the building, names of the library board and city officials, comments from F.W. Logan, who was in charge of the PWA and a copy of The Advance News from Dec. 10, 1936. That “copper coffin” (aka time capsule) is still inside the cornerstone. The new library building opened April 26, 1937.

In 1985 Mr. Richard (“Dick”) Pletcher introduced his plan for the front addition. His design for preserving the original library by wrapping the front and side of the building in new construction and will “always remind us to look forward to the future yet embrace our historical past.”

While the new addition was being built, volunteers moved the collection to a storefront on East Market Street. When it was time to move the collection back they loaded it up in a horse and wagon to take it back to the library.

In 2000 the Nappanee Public Library added on again to the back of the library. This addition added the current children’s department, meeting rooms for community use and a new entrance from the parking lot with a large check-out desk. The room that houses The Cube was originally created for the use of the Heritage Collection before it was moved to the Nappanee Center. This addition was completed in 2001.

John Leavitt, also a longtime board member, shared his views.

Fields, who came on as director during the pandemic said as he’s gotten to know the library and learn about its history during this centennial he realized the library “is very important to this community. Today is about giving back to them and having a good time.”