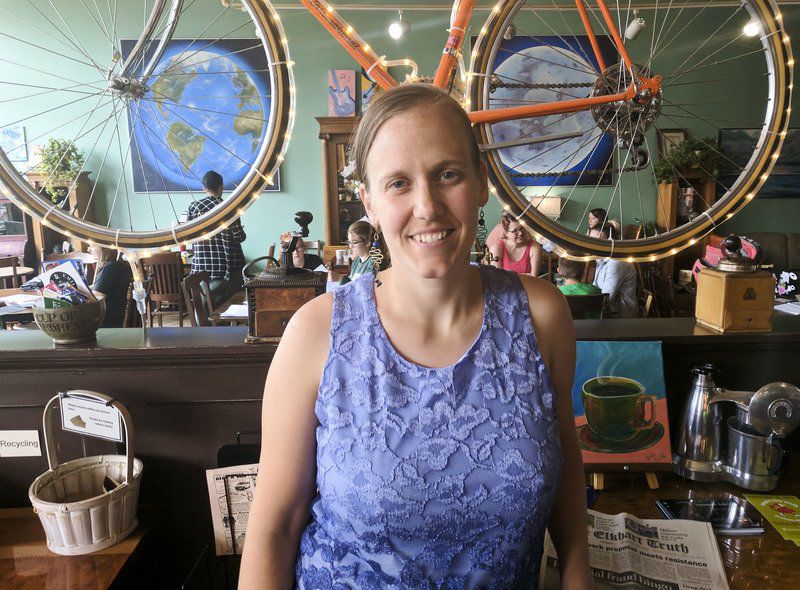 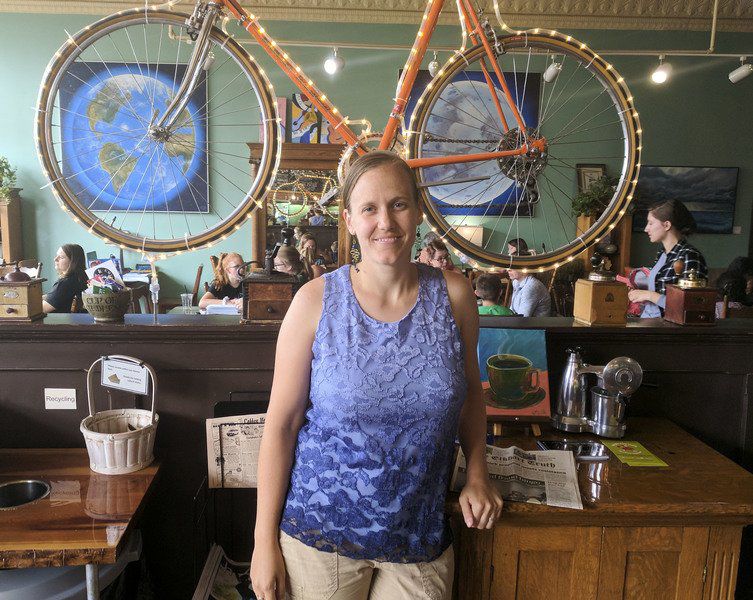 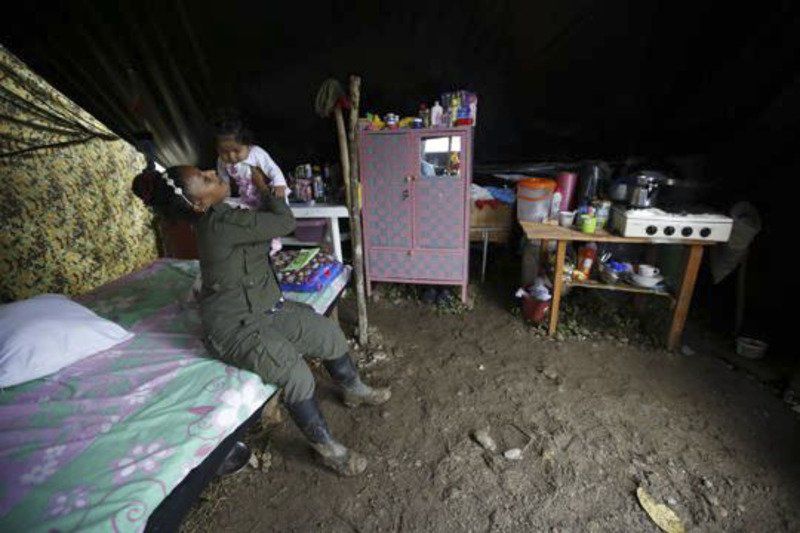 AP PHOTO | FERNANDO VERGARAIn this Feb. 28, 2017 photo, FARC rebel Sandra Saez plays with her 4-month-old daughter Manuela inside their tent at a rebel camp in a demobilization zone in La Carmelita, in Colombia's southwestern Putumayo state. The birth of babies at rebel camps and the arrival of older children who had been left with relatives during the conflict has injected a sense of optimism into camps where war-hardened rebels were beginning their transition to civilian life. 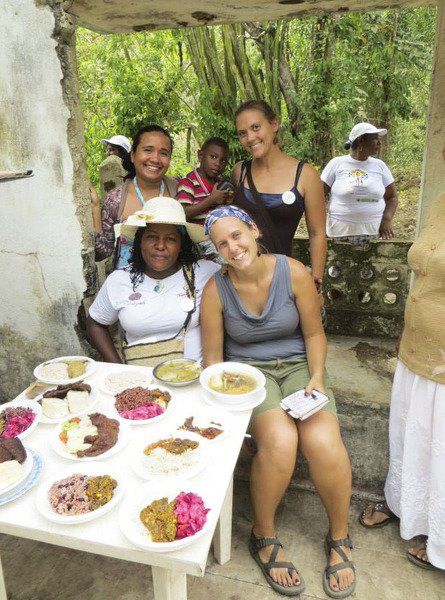 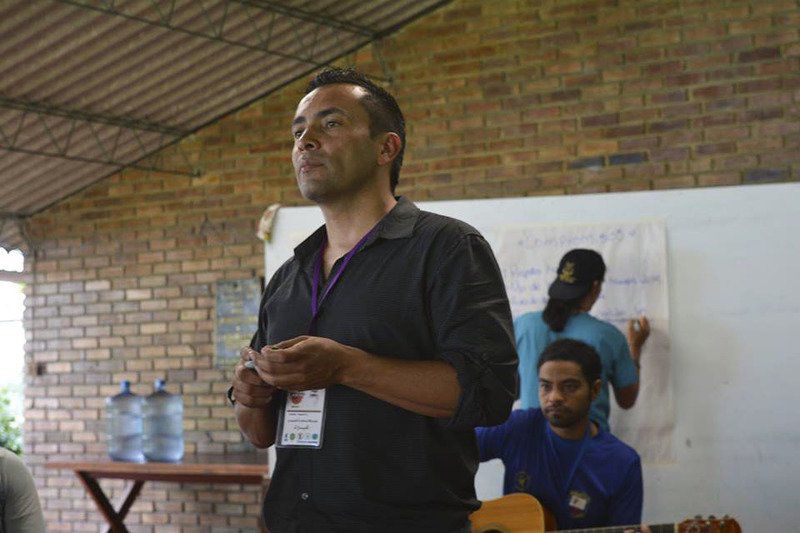 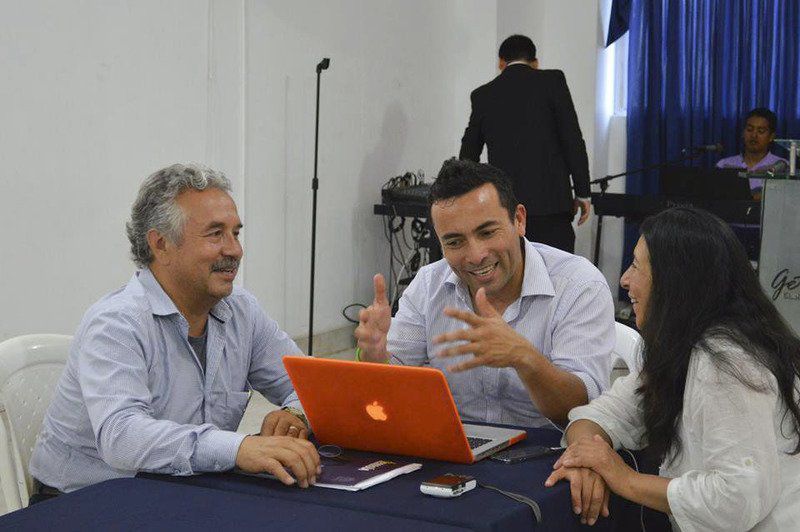 AP PHOTO | FERNANDO VERGARAIn this Feb. 28, 2017 photo, FARC rebel Sandra Saez plays with her 4-month-old daughter Manuela inside their tent at a rebel camp in a demobilization zone in La Carmelita, in Colombia's southwestern Putumayo state. The birth of babies at rebel camps and the arrival of older children who had been left with relatives during the conflict has injected a sense of optimism into camps where war-hardened rebels were beginning their transition to civilian life.

GOSHEN — When talking to Jes Buller, the Goshen-based peace education coordinator for Mennonite Central Committee, about her years working with Colombian peacemakers, she spends very little time talking about herself. Instead, Buller speaks to the incredible resilience of the Colombian peacemakers who wake up each day determined to bring positive change to one of the world’s longest-running armed conflicts.

Shortly after graduating from Goshen College in 2008, Jes Buller moved to Colombia as a part of MCC’s Seed program. For eight years, Buller worked as a facilitator and community organizer in coastal Colombia.

Buller said it is difficult to sum up the current state of affairs in Colombia to Americans, whose conceptions of the country often come from the Netflix series “Narcos.” First released in 2015, “Narcos” is a dramatized portrayal of the Colombian drug trade from the ’70s to the early ’90s. The show is rife with depictions of grotesque violence, assassinations and corruption.

According to Buller, the issue with “Narcos” is that the picture of Colombia it paints is far from complete.

“The problem with ‘Narcos’ is that it's a single story that says ‘OK, Colombia is like this.’ But in reality, it’s just one piece of the pie. It’s really not fair to Colombians,” she said.

“In the 1950s there was a flux of uprisings throughout Latin America,” Buller said. “They were revolutions to bring about better circumstances for people like poor farmers.”

She went on to say that while these revolutions either succeeded or were squashed in other countries, the conflict in Colombia persisted. Drugs entered the picture later on and introduced an economic element to an already complicated situation. Paramilitary units were assembled by wealthy landowners and politicians with ties to American and other foreign companies to either protect their land assets or kick people off land they wanted.

“Internationally, everybody was saying that this was one of the best-designed peace agreements in world history,” said Santiago Arroyo, a social studies teacher at Colegio Nueva Granada, a private school in Bogota.

The accords led to the official disbanding of the country’s largest guerilla group, FARC (Fuerzas Armadas Revolucionarias de Colombia), which then received representation in the national government.

However, a large number of people in Colombia’s big cities oppose the peace accords, said Buller.

“The conflict was happening in the farmland away from things. There are tons of people who live in Bogota [the capital city] who don't know anything except what the media tells them,” said Buller.

Diego Castro, a Mennonite peacebuilder in Bogota, said, “Not unlike Americans, urban Colombians may just see [the conflict] on the news and feel towards it as if it was in another country.”

In May 2018, Colombia elected Ivan Duque as its next president. Duque is a member of the political party Centro Democrático, which had opposed the peace accords.

“The recent presidential elections could be a little bit of a doomsday thing. The FARC members are doing what they said they would,” said Buller. “The politicians, especially those opposed to the accords, have largely failed to follow through. … Peace is ugly. Realistic peace involves compromise. I know a community that has publicly forgiven their paramilitary attackers.”

Buller said the peace process in Colombia is far from over. According to John Paul Lederach, Professor of International Peacebuilding at the University of Notre Dame, every one year of conflict requires six years of peacebuilding.

“So if Colombia has had 60 years of conflict, you need generations of peacebuilding,” Buller said. She asserted that Colombians will continue to strive for peace.

“Colombians are beautiful people,” Buller said. “Colombians have a setback and the next day they are getting up and saying ‘All right, let's get going.’ The other thing I would name is just the amazing resilience and joy that they have.”

“I miss a lot,” Buller said of Colombia. “My coworkers were my best friends and also my faith community and basically my family. Life is much more dispersed here,” Buller said of the United States.

Buller noted that because of the incredible work of Colombian peacebuilders to rebuild communities, there are children now being born to ex-guerilla members who may be the first children in decades to grow up outside of conflict in rural Colombia.

“These children,” Buller said, “are known as peace babies.”