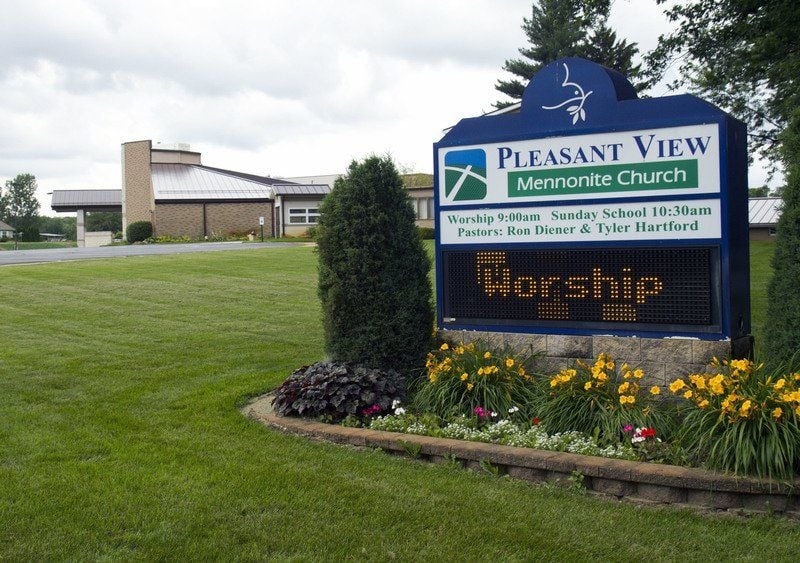 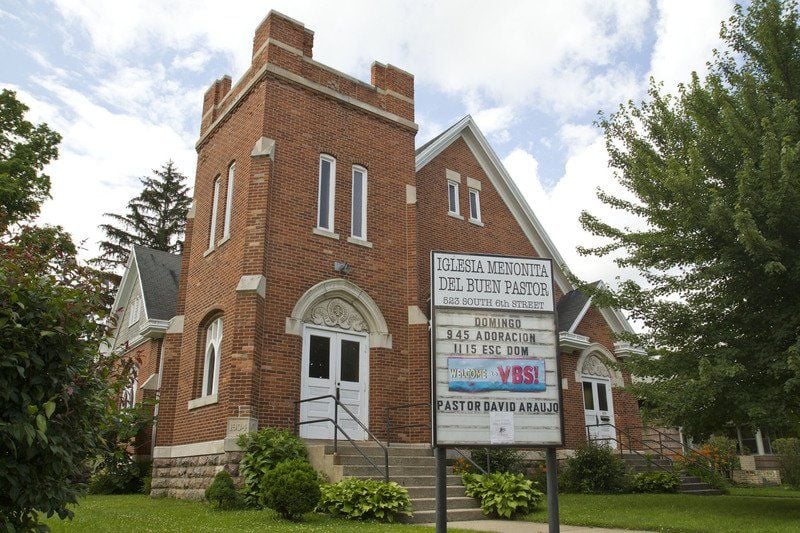 SAM HOUSEHOLDER | THE GOSHEN NEWSIglesia Menonita Church is shown on south Sixth Street in Goshen. The church is one of the churches leaving a Mennonite conference of churches over LGBTQ issues.

SAM HOUSEHOLDER | THE GOSHEN NEWSIglesia Menonita Church is shown on south Sixth Street in Goshen. The church is one of the churches leaving a Mennonite conference of churches over LGBTQ issues.

GOSHEN — Two Goshen churches have joined the growing list of congregations that have left the Indiana-Michigan Mennonite Conference over how its handled the issue of same-sex marriages.

Tyler Hartford, lead pastor at Pleasant View Mennonite Church, 58529 C.R. 23, Goshen, said the congregation has transferred to South Central Conference “as a result of our discernment regarding shared mission and value.”

“These are trying times for everyone in our national landscape and especially for people of faith,” Hartford continued. “Yet, in Christ and crisis, there is opportunity for transformation. As we have difficult conversations in our congregations, conference, and the wider Christian church, the resulting clarity allows us to discover new and life-giving ways of relating to our community in the name of Christ. We all know from our conversations with family and friends regarding relationships, lifestyle expectations and even sexual fidelity, it is impossible to avoid someone being hurt. Pleasant View has been having these difficult conversations internally and with our conference for a year and a half.”

About 225 people regularly attend services at Pleasant View, he said.

Hartford said he is working alongside others in the Anabaptist church on what will soon become a new network of churches.

The organization, called EVANA Network, was born in January from a conversation including more than 170 Mennonite and Anabaptist leaders.

EVANA — a combination of the words “evangelical” and “Anabaptist” — Network participants share the common ground of Anabaptist/Mennonite theology outlined in the Mennonite Confession of Faith, according to the network’s website.

Pleasant View will continue to evaluate their relationship with Mennonite Church USA following next week’s national convention and into the fall, Hartford said.

In the past 12 months, four Goshen congregations have cut their ties to the conference after several pastors say they became “aware of the movement within our conference and denomination to change the way we interpret the Bible, especially in the area of human sexuality,” according to a transformation letter from February 2014.

“We could have pastors do things outside of our teachings and beliefs,” Araujo said. “Those actions can affect a wider body. Ministers disregard those instructions and do their own thing that sent a powerful message to our church. That they can do whatever they believe in even though it’s outside our teaching positions and confession of faith. Our leadership do basically nothing about that. Pastors who perform same-sex marriages blatantly disregard our positions.”

Both pastors from both churches had also been serving in leadership roles within the conference, according to the Indiana-Michigan Mennonite Conference website.

Araujo was the regional pastor and served as a coach to pastors in the Central Region. Hartford was an advisory council representative, but explained his role was to provide feedback from the region and did not include decision-making.

In February 2014, Hartford and Araujo were among the nearly 50 church leaders who noted concerns in the transformation letter addressed to the denomination’s executive board.

“This moves us away from our stated beliefs on marriage,” the letter stated. “We are committed to hold to the words of Jesus when he said. ‘But from the beginning of creation God made them male and female. For this reason a man will leave his father and mother, and be joined to his wife and the two will become one flesh.’ We believe that the Bible never condones same-sex marriage and homosexual behavior. We also believe there are Scriptures that speak to the sin of homosexual behavior.”

“We believe the ongoing dialogue over blessing same-sex relationships, credentialing pastors in same-sex relationships and the additional demands of LGBTQ (lesbian, gay, bisexual, transgender, and queer) advocacy groups is crippling our witness and mission to the world,” the letter continued.

The two churches are not the first distance themselves from the Indiana-Michigan Mennonite Conference, which consists of about 70 congregations in Michigan, Indiana and Kentucky.

The conference falls under the umbrella of Mennonite Church USA, an organization that states in its Confession of Faith “We believe that God intends marriage to be a covenant between one man and one woman for life.”

Last June, the Clinton Frame Mennonite Church congregation made the decision to leave the conference after nearly 100 years of membership due to the controversy surrounding the conference’s perceived views on same-sex marriage and LGBTQ inclusion within the church.

In a statement released back in July 2014, Terry Diener, lead pastor at Clinton Frame, announced that a special congregational meeting was held June 4, 2014 during which approximately 95 percent of the church’s 400-member congregation voted to end its membership with the Indiana-Michigan Conference and explore options for affiliation that are more tightly aligned with their vision and purpose.

In the months since the decision, Clinton Frame, 63846 C.R. 35, Goshen, has decided to join EVANA Network when it launches later this year.

Leaders at Clinton Brick Church, 62499 Ind. 13, Goshen, could not be reached for comment Thursday.

The following local congregations are members of the Indiana-Michigan Mennonite Conference, according to the organization’s website. As of Thursday, the two Goshen congregations — Pleasant View Mennonite Church and Iglesia Menonita del Buen Pastor — that will soon depart from the conference had not been removed from the website. Those churches are not included below.

• Family Worship Center at the Lighthouse