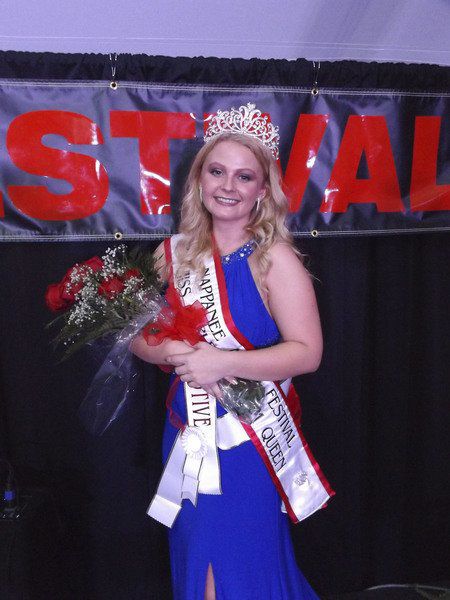 DENISE FEDOROW | THE GOSHEN NEWSThe 2018 Miss Apple Blossom Queen Mariane Grace was crowned Thursday night at the opening of theNappanee Apple Festival. Grace is a graduate of Elkhart Central High School and a sophomore at Goshen College. It was the first time Grace has entered the Nappanee pageant. 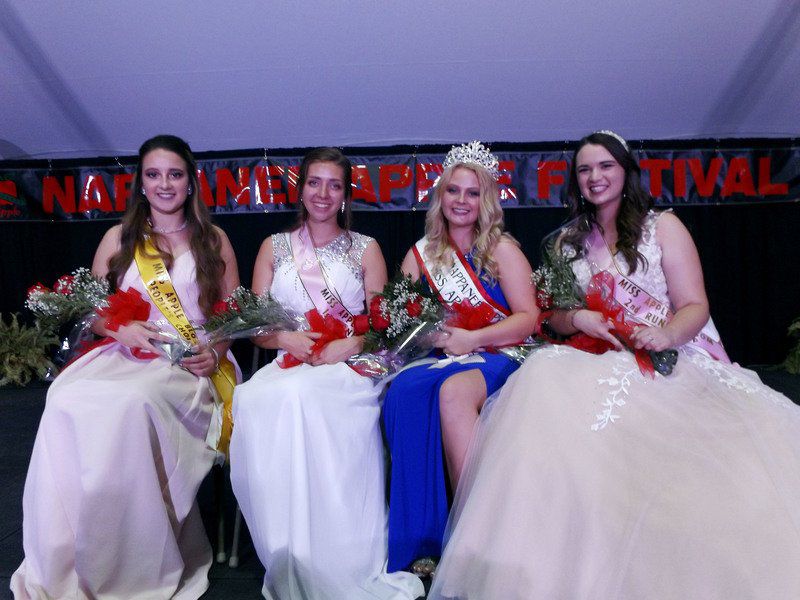 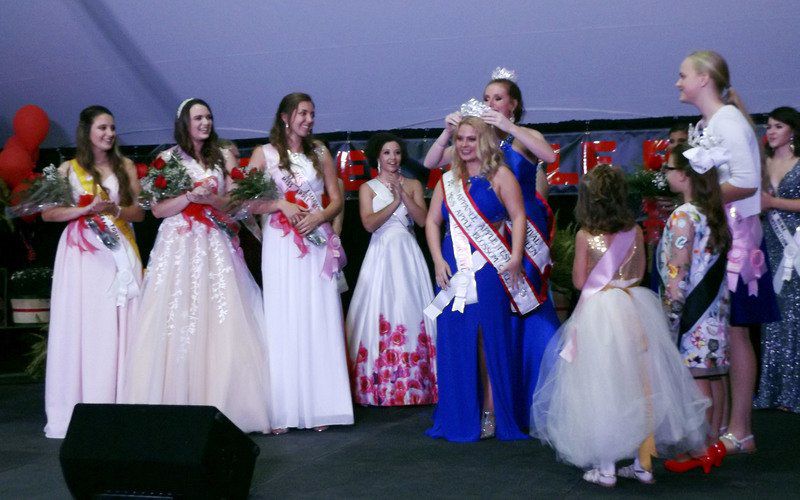 DENISE FEDOROW | THE GOSHEN NEWSThe 2018 Miss Apple Blossom Queen Mariane Grace was crowned Thursday night at the opening of theNappanee Apple Festival. Grace is a graduate of Elkhart Central High School and a sophomore at Goshen College. It was the first time Grace has entered the Nappanee pageant.

Grace, daughter of Tony and Tricia Grace, is a 2017 Elkhart Central graduate and is studying nursing and Spanish at Goshen College.

Grace, who was sponsored by Rodger’s Automotive, was one of 11 young ladies vying for the title and scholarship prizes.

One of the categories the contestants were judged on was the essay, which they read to the audience. Each contestant was asked to write about why she would make a good court member or queen and what the Nappanee Apple Festival means to her.

Grace said in part, “To be a member of the queen’s court means to be a leader and a role model.”

She said that she looked forward to promoting celebrating diversity. She said she cared about people and all the cultures that make up the community.

“I have a passion for uniting people and events that bring people together from diverse backgrounds like the Apple Festival, which invites people from all over to come in,” Grace said, adding that she has family members from outside the county who attend the festival.

She concluded her essay by saying that being a member of the court or queen would “allow me a voice in the community.”

Several contestants and the outgoing queen offered messages of positivity and hope, including Hanna Fitzpatrick who was a member of the court last year. She shared that it took courage for her to enter the pageant. “I’m not the smallest person or the strongest — I struggle with self-confidence — but I don’t give up on people, I treat everyone with kindness.”

Krista Wagler, who was the People’s Choice winner, said that she was diagnosed with a learning disability and school was always hard for her. She sometimes felt like an outsider, which she thought made her relatable. Madison Kuhn spoke of her mission work and passion for helping others. Alexis Stutzman spoke of the life lessons she learned from her show choir director, like “modest is hottest.”

First runner-up Grace McCoy talked about the joy she felt in participating in a long-standing family tradition and how being an ambassador would make her proud. Kennedy Kuhn talked about the responsibility of being a member of the court and leading by example with a servant heart and how she always had “amazing women as examples.”

Ireland Hooley shared her goal was to “change someone’s day, even if just with a smile.”

The 2017 queen, Gabby Birr, gave her parting speech and began with a prayer. She thanked several people, including her parents. “My biggest supporters — thank you for always reminding me that I’m beautiful.”

She said she decided to use the platform while she still had it to say, “Each one of you is vital to this world; you are chosen; you are loved.”

She said, “We as a nation need to come together and love one another with a Christ-like love.”

To the contestants she said she was so proud of their courage to represent themselves in the pageant and offered these words of advice, “Love endlessly, savor memories, stay humble; perform to the best of your abilities.”

The People’s Choice Award winner, Krista Wagler, was chosen by the number of dollar votes received and received a cash prize. Afterward she said that it “means a lot. I’ve had a lot of support from my community.”

Second runner-up was Adrianna Nettro, Miss Rulli’s Italian Restaurant. She is a junior at Indiana University South Bend and is the daughter of Jeremy and Jennifer Nettro. She received a $500 scholarship.

First runner-up was Grace McCoy, Miss Amish Acres. She is the daughter of Josh and Lana McCoy. She received a $750 scholarship, and certificates to Chic & Fearless Boutique and Key Boutique.

Grace received certificates to boutiques and $1,000 scholarship. She said it was the first time she entered the Miss Nappanee Apple Festival Queen pageant and was surprised she won. She said she entered Bristol Homecoming twice and was named first runner-up both times.

“I’m so ready to have a voice in the community and get people together," she said. "I have so much passion to unite everyone. This means everything to me."