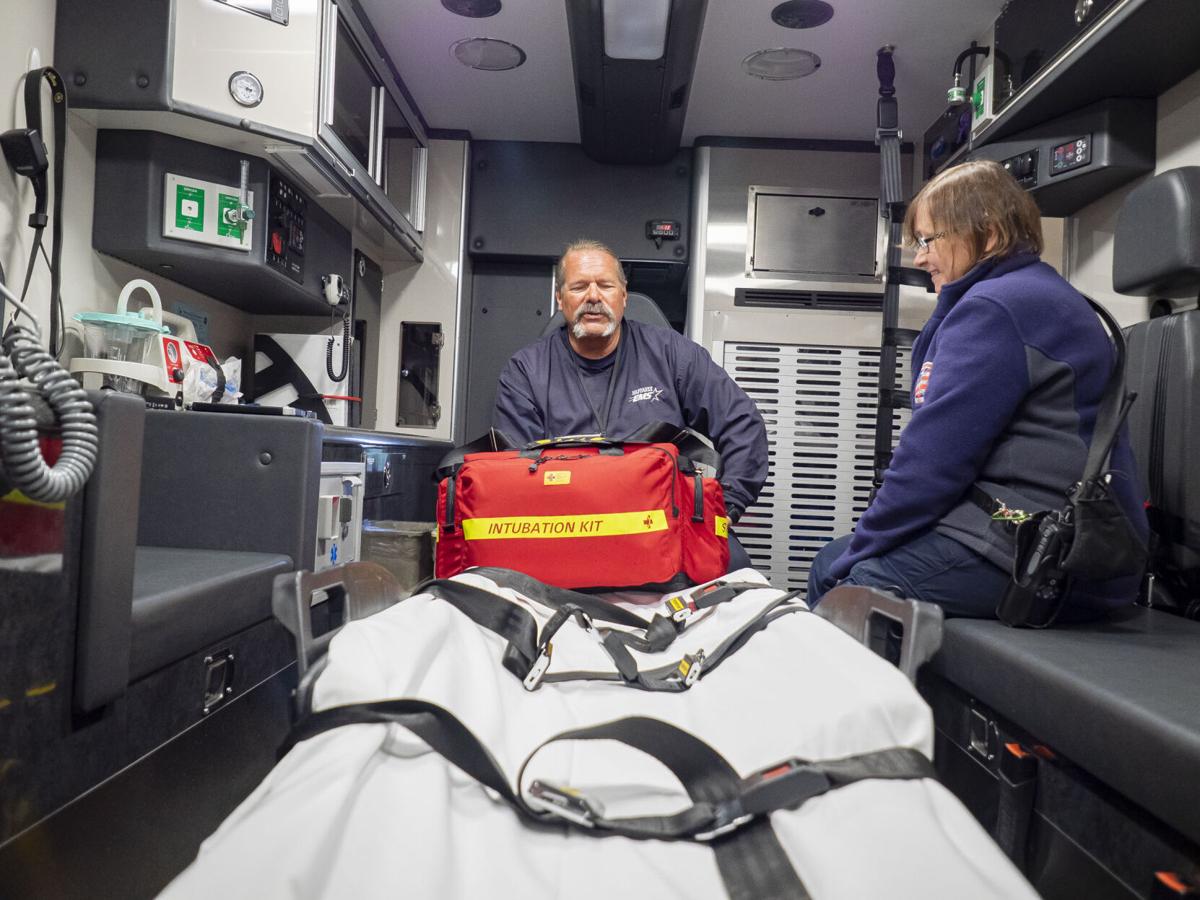 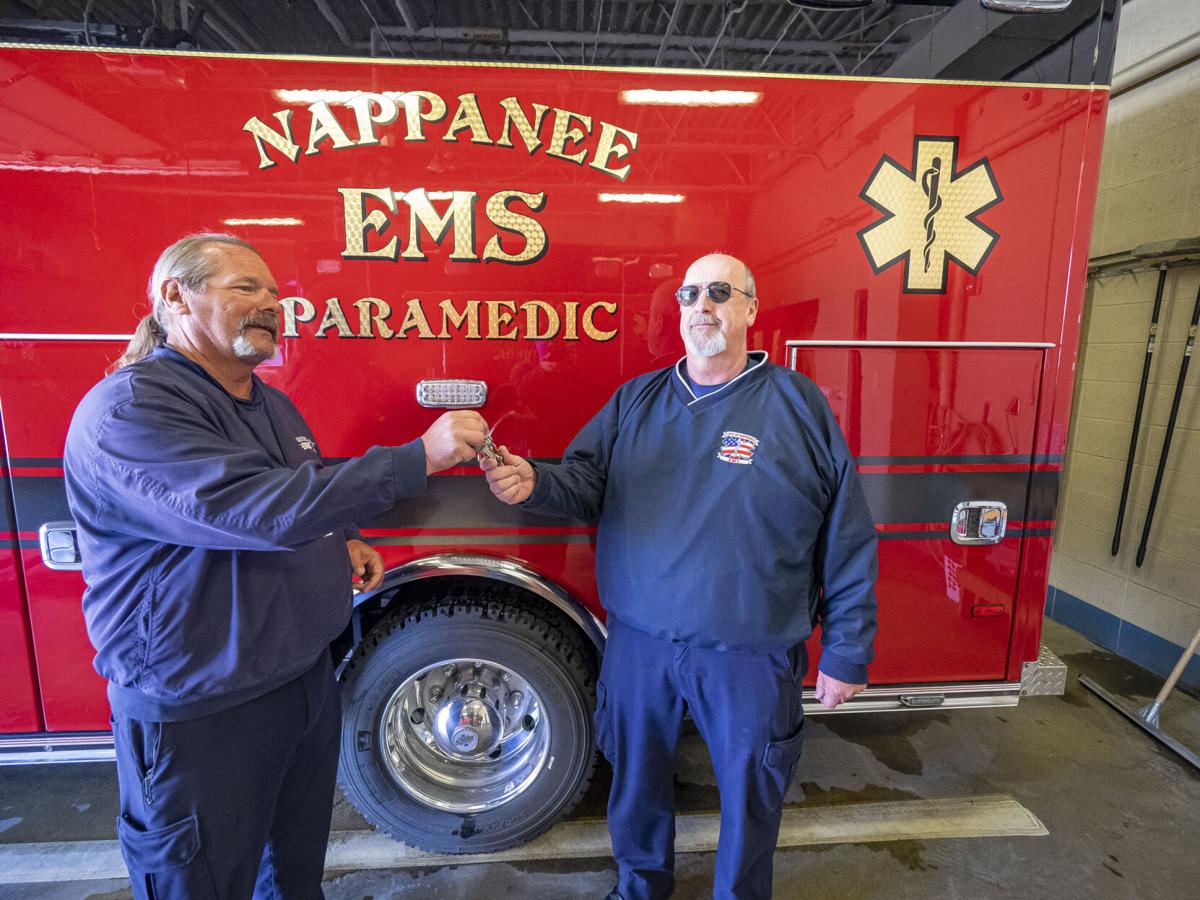 Nappanee Emergency Medical Services Chief Jim Sumpter, left, hands over his keys Assistant Chief Steve Heckathorn Wednesday at the Nappanee EMS garage in Nappanee. Sumpter is retiring after serving the Nappanee community for more than 40 years on the EMS department. 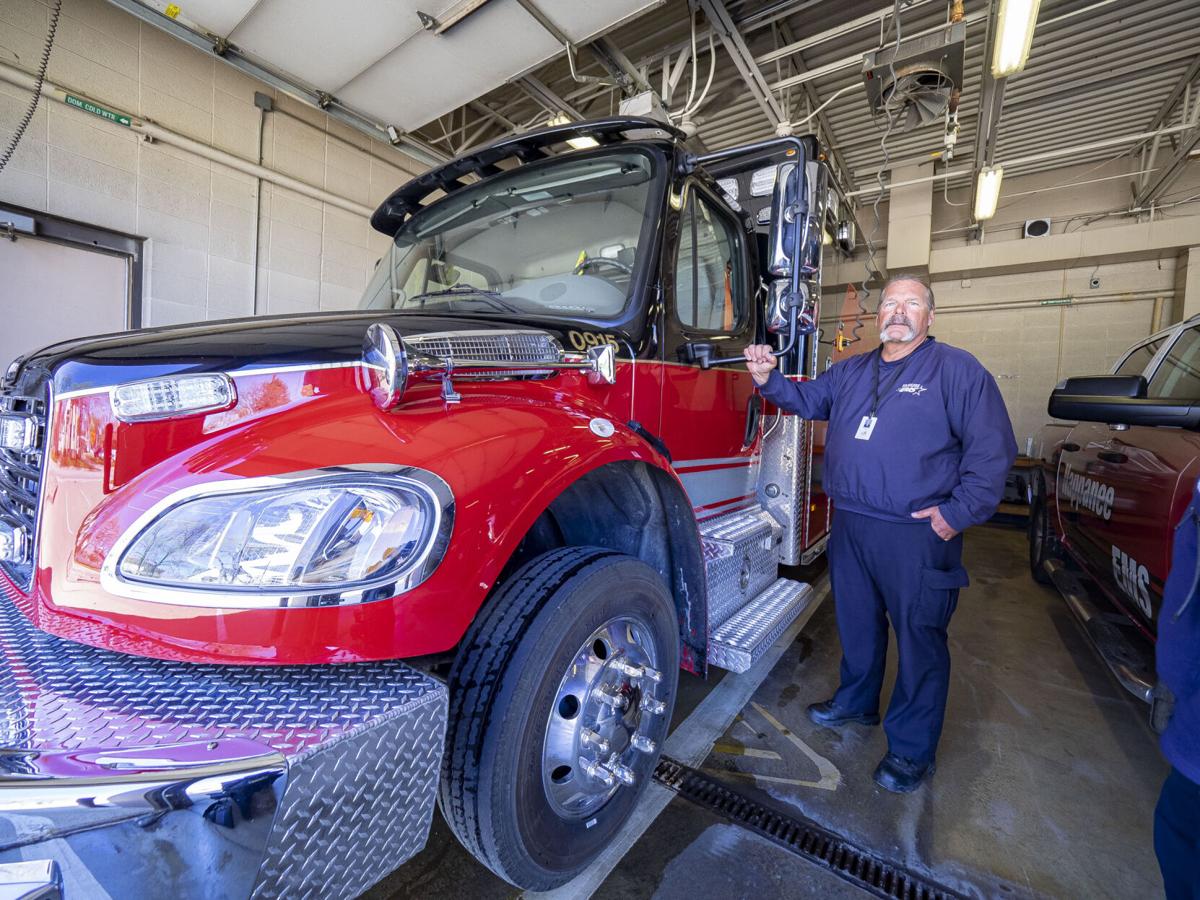 Nappanee Emergency Medical Services Chief Jim Sumpter speaks during an interview Wednesday at the Nappanee EMS garage in Nappanee. Sumpter is retiring after serving the Nappanee community for more than 40 years on the EMS department.

Nappanee Emergency Medical Services Chief Jim Sumpter, left, hands over his keys Assistant Chief Steve Heckathorn Wednesday at the Nappanee EMS garage in Nappanee. Sumpter is retiring after serving the Nappanee community for more than 40 years on the EMS department.

Nappanee Emergency Medical Services Chief Jim Sumpter speaks during an interview Wednesday at the Nappanee EMS garage in Nappanee. Sumpter is retiring after serving the Nappanee community for more than 40 years on the EMS department.

NAPPANEE — It’s been a highly emotional past few weeks for Nappanee Emergency Medical Services Director Jim Sumpter, as he’s been working out his last days in a job where he’s spent most of his adult life.

“I never thought I’d be getting as emotional as I’ve been the last couple of weeks,” he admitted.

“So I know the importance of volunteers to the city,” he said. “I’m the third chief the city has had.”

Sumpter is a Nappanee native and graduated from NorthWood High School in 1979. He and is wife Laurie have two children — Phil, who is a Concord Township fire chief and once worked in the Nappanee EMS Department, and Amanda, who runs a law office in Elkhart. They have four grandchildren — two boys and two girls ages 1 ½ to 9 years old.

Sumpter said he worked in a medical supply company for a few years after graduation, and for the Nappanee Street Department for a year. For the past 27 ½ years he’s been the full-time Nappanee EMS chief.

He said he’d been “kicking around the idea” of retiring for a couple of years.

“I wanted to go out on my own terms — on top — and I felt in my heart it was time to move on to another possible opportunity,” he said.

He said some opportunities came up for him last spring and a few months ago something came to fruition.

“The timing seemed perfect,” Sumpter said. “Everything seemed to fall into place, and I felt like it was time.

“I’ve seen enough things that I wish on April 15 at 2 p.m. when I leave that I could take a wire brush to my brain to get all the bad things in my head out, but there’s a lot of good things in there, too,” Sumpter said.

Sumpter said he wasn’t able to share yet what his new adventure might entail, but he was definitely takings several months off. He did say it was not in the medical field.

“The state of Indiana actually retired me from the Department of Homeland Security,” he said, adding that they retired his certification number and that he had no plans for getting into the medical field.

“Many years ago I said when I’m done, I’m done,” Sumpter said.

He added that he was “very excited” about the opportunity that might open to him in a few months and it would still allow him to spend time with family like he wants.

He said he’s missed a lot of his kids’ events when they were in school and has missed some of his grandchildren’s too.

“I don’t want to miss anymore,” he said.

Sumpter shared the calls that were the hardest for him were when his mom died and his dad died. He was on both of those calls. “And also when (Officer) Butch Nine was killed,” he said. “Those three are the ones that stand out the most that affected me.”

But he said amidst all the difficult calls there are some that are humorous too.

“If it weren’t for people making poor decisions we’d all be out of jobs in emergency services,” he said, and added he didn’t want to make light of anyone’s distress, “but you have to have humor in it sometimes too.”

He shared it was most meaningful to him when patients or family members “recognize me on the street and thank us.”

“I’ve had such a great staff of full-time and volunteers that really make me look extremely good. That’s been very rewarding for me,” he said. “I’ve always had the philosophy that you need to surround yourself with good people if you want to be successful.”

The chief said he’s always strived to give his people the tools to succeed.

“Whether that was education or equipment or in-service — whatever — give them the opportunity to succeed because that will reflect on quality patient care time after time,” he said.

He shared that his first ambulance was a van, and he once had an ambulance stolen from the hospital during a high-speed police chase.

FUTURE OF THE DEPARTMENT

“I’ve been pushing for the merger for several years,” Sumpter said, when asked about the proposed merger of the fire and EMS departments.

He said doing so makes the most sense economically and personnel-wise and said there are not too many departments that are split.

“The relationships we’ve built with fire is second to none,” he said. “We’re almost there in theory. We just haven’t put it together on paper to merge. We work extremely well as a team, and that’s one thing I’ve strived for for many years. We have young people that are very excited to work both sides. That will be easier once we get a new station and we’re housed together.”

Having enough people to answer daytime calls is one reason for the merger. Sumpter said Nappanee is fortunate to have employers who allow volunteers to respond to calls, but as call volume has continued to increase, it’s become more difficult. He said it’s also hard on the volunteers to be off the clock for hours “even with the very good stipend they get at the end of the year.”

He said this is a nationwide issue and cited a study by the State of Indiana that showed how much it saves taxpayers to have volunteers and thought the amount was about $4 billion. He said there’s no way that Nappanee would be able to have a full complement of fire/emergency medical technicians and fire/paramedics without volunteers.

“Our volunteers are such an integral part of the departments,” he said.

With everything Sumpter has seen over the years, he tells all the new people coming in — whether staff or volunteer — that they need to have a positive outlet.

“The worse thing you can do if you go on a call that’s gut-wrenching or affects you — you can’t go home and jump in a bottle or sulk — you need to talk; need to have a positive outlet like exercise or crying — those are all natural things.”

He said personally he believes his sense of humor has helped.

“For me the biggest things has been my home life — the stability of my wife, who I can’t thank enough who’s put up with me for over 40 years in this job and my kids, who grew up with it and my grandkids.”

The other outlet for Jim is his motorcycle.

“I just get on and lose myself, basically,” he said. “I call it scooter therapy.”

He also tells people they’re going to have to make sacrifices. Volunteering for this is not like Kiwanis where you can just not show up.

“If you slack off here, someone can lose their life. You’re going to miss holidays and ballgames,” he tells them and everyone says they’re prepared — until it happens.

He likes to bring prospective EMT’s on ride-alongs because maybe they’ll see some calls and decide they don’t want to do it or on the other hand they may go on a ride along and love it.

“Emergency Services is not for everyone,” he said. “If you’re aspiring to make a lot of money, you’re not going to.”

When the announcement was made at a Board of Public Works meeting a couple of weeks ago, city officials and fellow department heads expressed appreciation of Sumpter.

Nappanee Mayor Phil Jenkins said he was “shocked” when Sumpter came to him with the news.

“He has brought our department from a voluntary department to a full time paramedic service,” Jenkins said. “I just want to say how lucky Nappanee is to have Jim as our medical services director for as long as we have. His staff treats people professionally and the medical attention they provide is second to none in the state.”

Board member Wayne Scheumann said he “reluctantly accepted” Sumpter’s retirement and appreciated his service and all the long hours he put in over the years.

Board member Rod Stump shared a more personal account of Sumpter borrowing an ambulance from Wakarusa in order to get Stump to the hospital a month and a half ago and also how he enjoyed his time as council liaison to EMS years ago.

“I thoroughly enjoyed that — thank you,” he told Sumpter.

Most of the department heads present on the call shared memories of Jim and his sense of humor, including Fire Chief Don Lehman who said he believed they both became chiefs around the same time and he often relied on Sumpter as a sounding board.

As for his infamous sense of humor, Lehman said he had to double check the date on Sumpter’s memo to make sure it didn’t say April 1.

Utilities Manager Gale Gerber said he had the privilege to be on the department with Jim, and he always did the best for his patients and as a leader Gerber said Sumpter kept his people in line but made it fun, too.

Police Chief Steve Rulli commented that Sumpter has always been helpful and was personally helpful to him and said Sumpter would be missed not only in the city but in the area as well. Others shared as well. Sumpter said he appreciated “everything the city has done for me.”

Jenkins said, “Jim, for someone in the city to be in that capacity as long as you have — you’ve served well and deserve a great retirement.”

On April 12, his last public meeting Jenkins presented him with an engraved watch and thanked him again for his service.

Michael Fort, EMS district manager for the Indiana Department of Homeland Security, presented Sumpter with a State EMS Director Award. After the meeting, they celebrated Jim with a party.

He added that he won’t miss “the potential to see things I don’t want to see anymore, the 3 a.m. calls or calls on Christmas morning and missing things with my family.”

“It’s not an easy job,” he said later, “but I wish more people would be knocking on the door wanting to do it because it’s very fulfilling and very rewarding. I feel very privileged to have been able to serve Nappanee.”