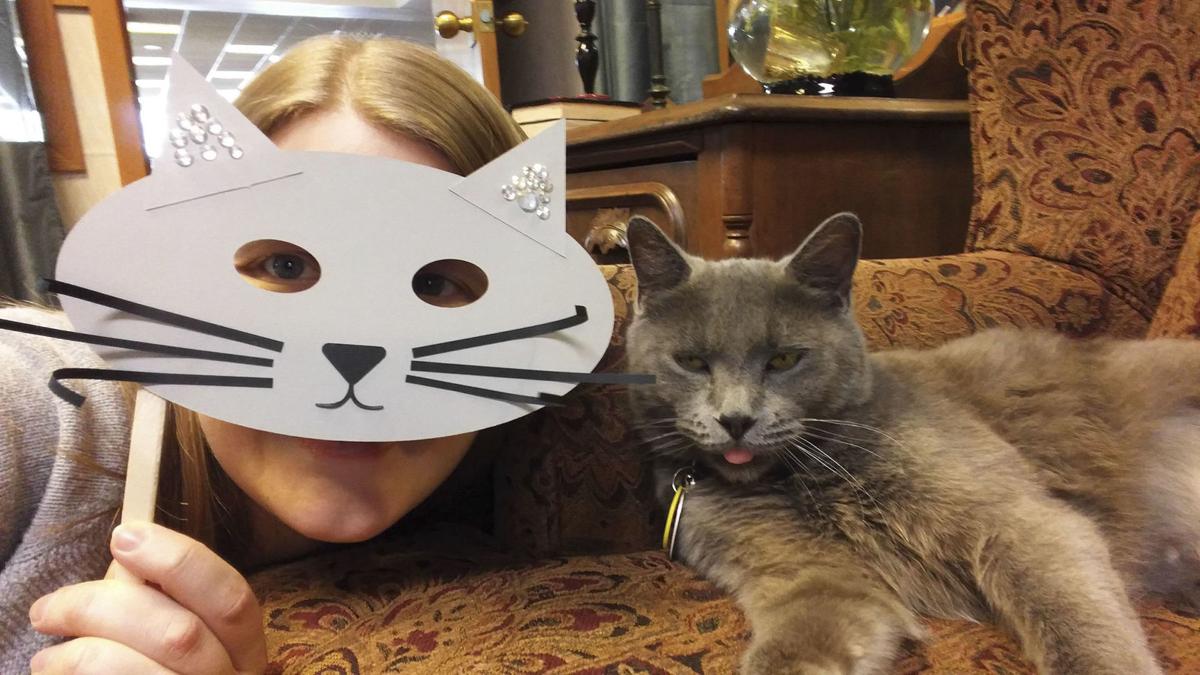 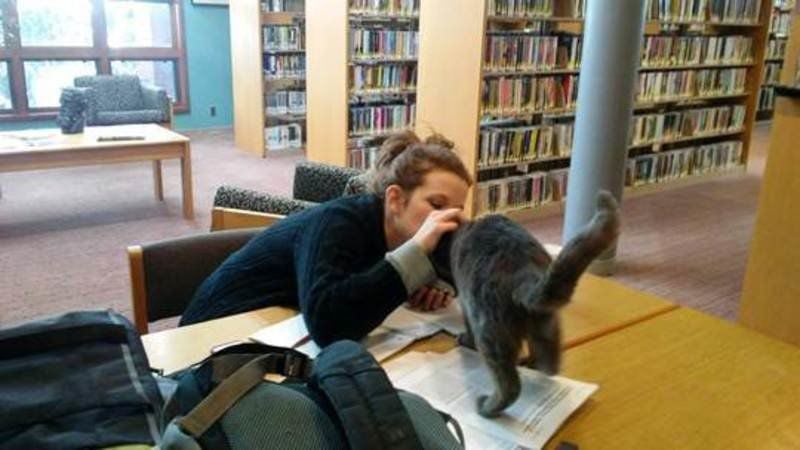 PHOTOS CONTRIBUTEDPage Turner, top, Bristol Public Lilbrary’s cat, poses with a person holding a cat mask at the library. Above: Page Turner greets a visitor. The library adopted her this spring. 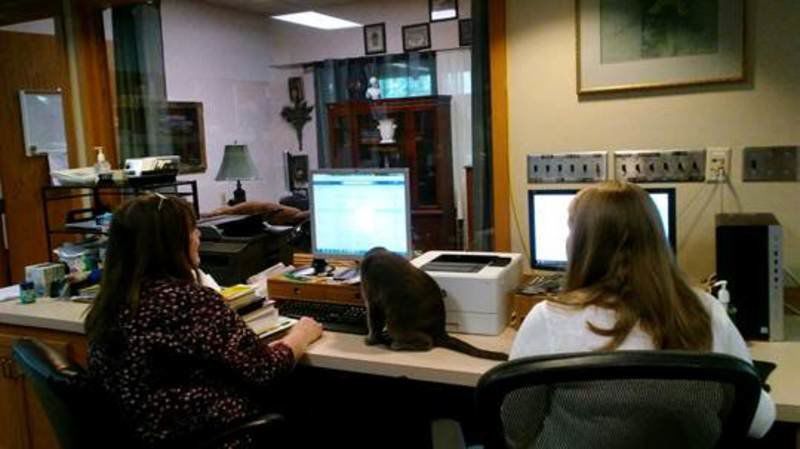 Page Turner, a new cat at Bristol Public Library, plants herself between two computers recently. The stray from the Humane Society of Elkhart County was adopted by library employees this spring.

BRISTOL — This spring, patrons of the Bristol Public Library got a surprise: little cat feet padding through the stacks. Page Turner, the library’s new feline, was a former stray picked up by the Humane Society until the staff found her a home.

Dawn Powell, the library’s adult coordinator, explained, “We were looking for a dog, a ‘Paws to Read’ therapy dog. And then we said, ‘What about a rabbit? Something cuddly?’”

The staff spent hours at the Humane Society of Elkhart County. And an older cat — the shelter estimated about 9 years old — with her tongue slipping out through missing teeth, caught a librarian’s eye.

“We picked her up and she just laid out in my boss’ arms. ... She’s really cute. Thinking, she’s a little older, she doesn’t have her two front teeth, let’s give her a forever home. We weren’t sure other people would take her,” Powell said.

But according to a statement by library director Carol Anderson, the community has welcomed the cat even more than she expected. It makes sense since pets and pages have gone hand in hand for centuries, she said, explaining that in ancient Egypt, librarians kept cats to keep the book bindings from being eaten by rats.

While Page Turner doesn’t need to keep the mice away, she helps in her own way. Powell said her presence attracts new visitors to the library. It also makes regular patrons want to settle in and stay a while.

The Bristol Public Library is open on the first Saturday of each month, when “the front lawn of the library will be turned into a shopper’s paradise,” according to Powell. Outdoor vendors will stay stationed at the market from 9 a.m.- 2 p.m.

“We’ve had people that have lost their pet who come in to be with her. We have people come in to study with her,” she said. She described one boy who was terrified of cats — but after Page Turner joined his reading group for a while, he slowly got over his fear.

Janet Graham, executive assistant and volunteer coordinator at the Humane Society of Elkhart County, said the presence of animals can work wonders for children and adults alike.

“It makes such a difference,” she said. “I personally work with therapy dogs. It’s just amazing when you go out and see. I may not know the gist of it, I may not know this is an autistic child who never spoke, but they’re reading out loud to my dog.” Graham has personally taken her therapy dog to hospitals, nursing homes, hospice centers and libraries. No matter where, the animals bring a sense of calm to those nearby.

Powell said though the staff didn’t know it at the time, Page Turner is just what the library needed. “We are just amazed,” she said. “She’s the perfect cat for us. … The effects that she has — people come in and say, ‘Is that a cat? Whose cat is that?’ And we say, ‘She’s your cat. She’s our cat. We’re family. She’s yours too.’”