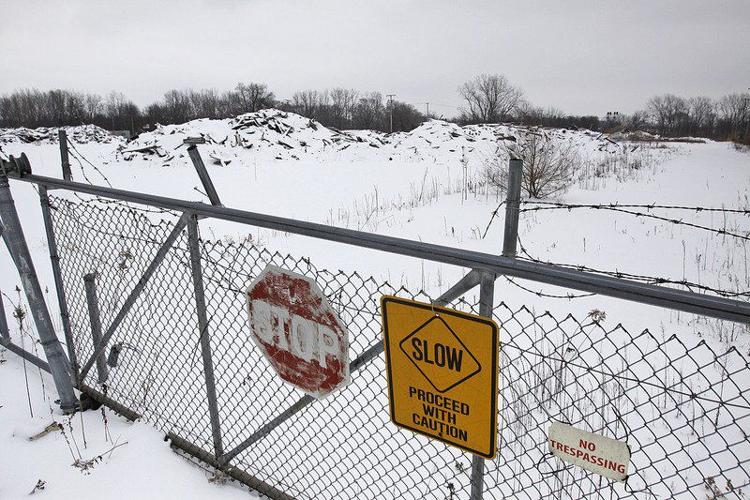 FILE PHOTO | THE GOSHEN NEWSIn this file photo from Feb. 16, 2016, the former Johnson Controls site is blocked off with fences and no trespassing signs. Neighbors of the Goshen property are suing three businesses, claiming they were exposed to asbestos. 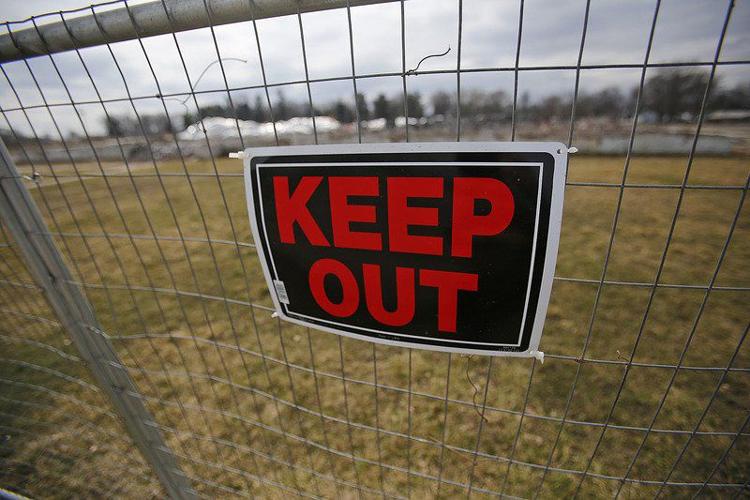 FILE PHOTO | THE GOSHEN NEWSIn this file photo, a "keep out" sign is posted at the former Johnson Controls site March 9, 2016. Tarps and about 1,500 feet of fence were used to secure the site, which tested positive for asbestos. Neighbors of the Goshen property are now suing three businesses, claiming they were exposed to asbestos.

FILE PHOTO | THE GOSHEN NEWSIn this file photo from Feb. 16, 2016, the former Johnson Controls site is blocked off with fences and no trespassing signs. Neighbors of the Goshen property are suing three businesses, claiming they were exposed to asbestos.

FILE PHOTO | THE GOSHEN NEWSIn this file photo, a "keep out" sign is posted at the former Johnson Controls site March 9, 2016. Tarps and about 1,500 feet of fence were used to secure the site, which tested positive for asbestos. Neighbors of the Goshen property are now suing three businesses, claiming they were exposed to asbestos.

GOSHEN — A group of 56 people have filed a lawsuit claiming the demolition of the Johnson Controls plant exposed them and their property to dangerous asbestos particles and that tons of contaminated debris were illegally buried on a farm east of the city.

The defendants have not yet responded in court to the lawsuit.

According to the lawsuit, Johnson Controls retained access to the building after the sale and remains responsible for reported chemical contamination of groundwater that occurred at the plant. That pollution is the subject of another ongoing lawsuit by residents in the same neighborhood.

First Federal Savings Bank of Huntington holds the mortgage on the property and is also named as a defendant.

The lawsuit alleges the owner of the building, Tony Adkins of TOCON, conspired with Richard Swift to tear the building down with heavy equipment without the proper inspections required by law. The demolition started in early 2012 and stopped in March 2014, the lawsuit states.

The desire to demolish the building was to make the site more attractive to the Goshen school board, which was considering acquiring the property to construct a softball field, the lawsuit states.

“However, before the school would purchase the property, the buildings needed to be demolished, and demolition bids obtained in October 2009 indicated that the cost to properly demolish the buildings and haul away the debris was more than the site was worth,” the lawsuit states.

According to the lawsuit, those demolition estimates ranged from $800,000 to $1.5 million.

“Therefore, Adkins enlisted the help of Swift, who agreed to tear down the buildings for free as long as he could salvage and sell the scrap,” the lawsuit states.

The lawsuit complaint continues, stating, “JCI, TOCON, and FFSB knew that significant quantities of asbestos remained in the buildings at the site when Swift tore them down. However, through their actions and inactions, they conspired to have him illegally demolish the buildings and remove the debris to further their plan that GCS would purchase the property.

“Adkins wanted GCS to purchase to property so that he could get out from underneath his mortgage with FFSB, and recoup his investment in the site.”

The lawsuit outlines concerns that people living near the property were exposed to asbestos during the demolition. Asbestos is a mineral fiber found in rocks and was once commonly used in many products, particularly wraps and insulation around heating ducts and pipes, according to the EPA.

“Disease symptoms may take many years to develop following exposure.”

The lawsuit expresses concern that residents near the plant were exposed to asbestos that was pulverized by the heavy machinery in several ways.

“The dust and asbestos blew into the plaintiffs’ neighborhood and contaminated their homes and properties,” the complaint states. “Sometimes the dust emanating from the site was so thick that it would leave a heavy film on the plaintiffs’ cars and windows, patio furniture, and inside their homes.

“The plaintiffs, including small children, breathed the asbestos-containing dust and have been seriously harmed because the asbestos fibers are now lodged in their lungs, and could lead to serious diseases such as cancer.”

After the building was demolished in 2016, piles of debris were left on the property. An inspection found asbestos in the debris and the EPA scrambled to conduct an emergency cleanup of the site.

“The defendants in this action, JCI, TOCON Holdings, LLC (“TOCON”), and First Federal Savings Bank (“FFSB”) (collectively, “defendants”), each knew that Swift tore down the buildings without removing all of the asbestos. However, they did not warn the plaintiffs. Instead they directed Swift’s actions and engaged in unlawful conduct, collectively and individually, for their own personal financial gain,” is the allegation by the lawsuit.

The lawsuit alleges Tom Mills, senior vice president at FFSB, “provided Swift with a schedule and deadlines and instructed him to remove the debris from the site."

Indiana law states buildings containing asbestos cannot be demolished without notification of the Indiana Department of Environmental Management and removal of the asbestos material. In addition, such material must be placed in a licensed landfill that is able to accept asbestos, according the lawsuit.

“In an email dated February 15, 2015, and sent to several executives at FFSB describing the dumping, Mills explained that it 'is taking so long' because Swift was covering the debris with topsoil.

“Mills further stated, 'the good news about where he is dumping the debris is that it is costing him probably one third of what it would cost to transport and dump the debris at a landfill.'”

The lawsuit alleges Mills estimated that Swift dumped and buried about 200 truckloads of debris at the farm.

The lawsuit also alleges the bank financed the dumping, which was never finished as piles of debris were left at the site, the same piles the EPA was called in to control.

The lawsuit does not ask for any specific monetary damage, but does seek an amount the court would consider fair compensation, punitive damages and legal fees.

Read the entire complaint by going online to goshennews.com and clicking on this article.