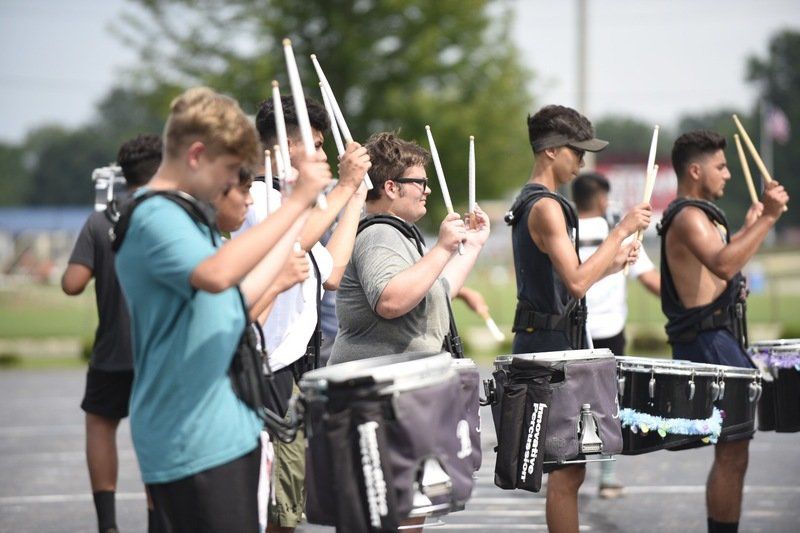 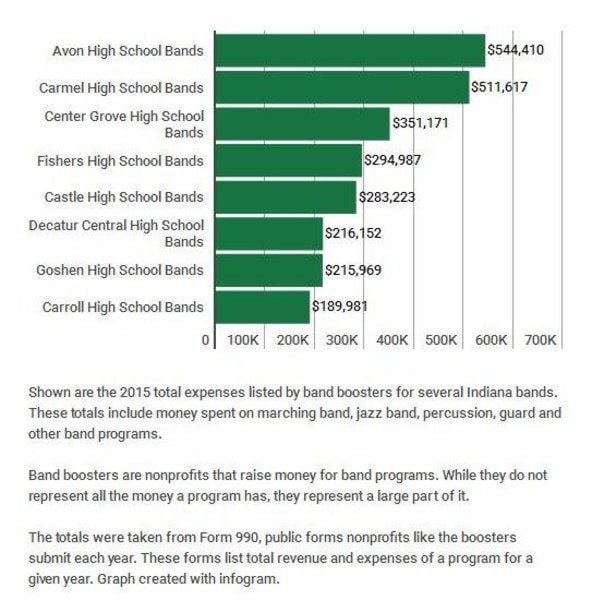 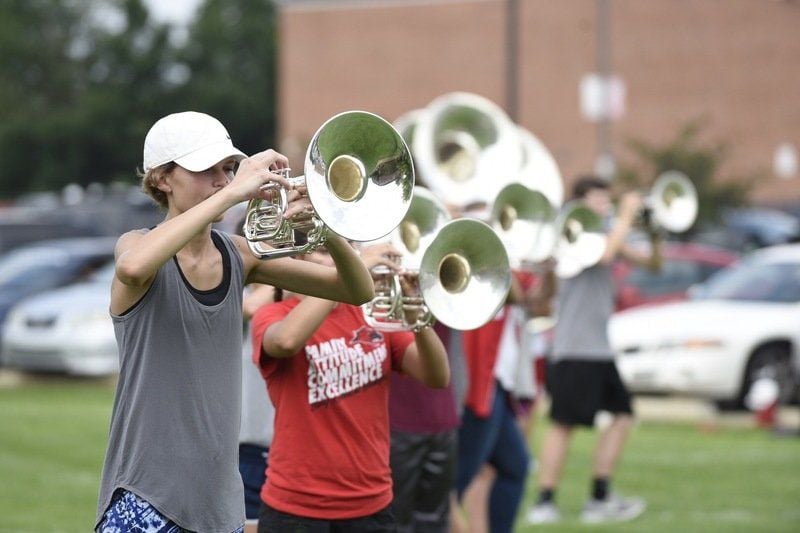 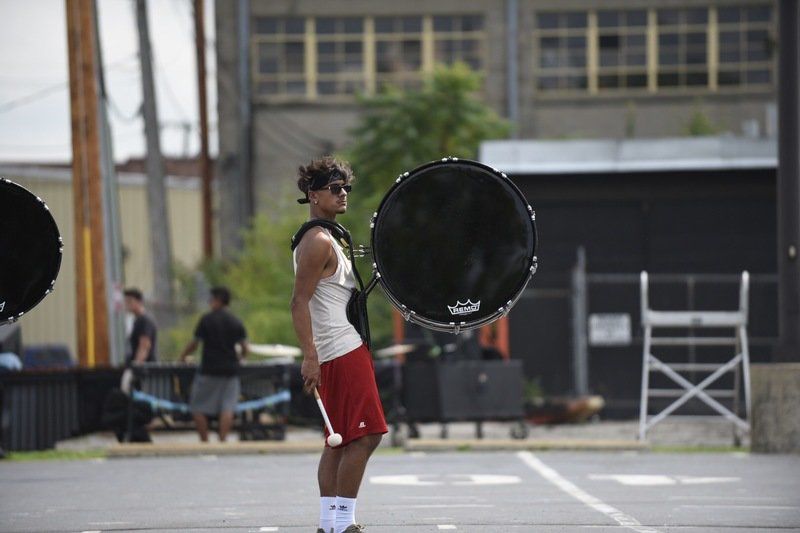 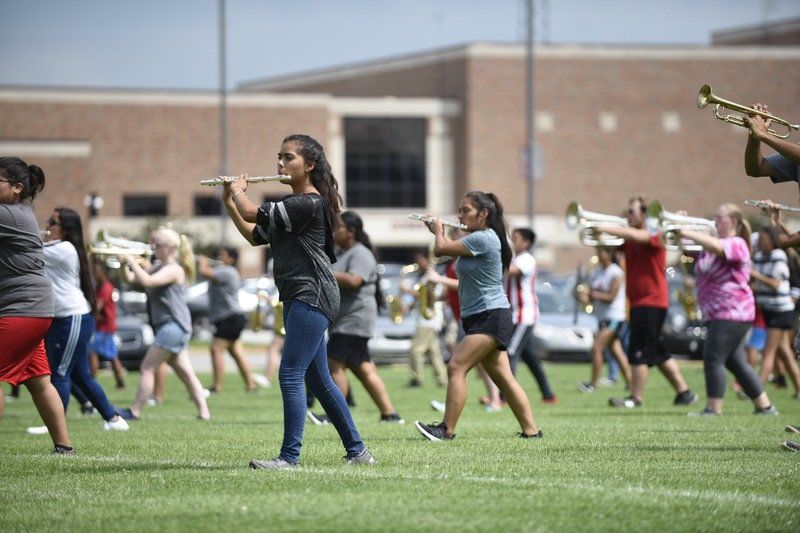 GOSHEN — Every fall, the clicking of a metronome can be heard across town.

The sound of snares echoes off the high school walls as brass blares its way into the backyards of Eighth Street houses.

Together, they signal the start of marching band.

Tom Cox, director of the Goshen Crimson Marching Band, holds out a megaphone.

“One more time,” he repeats.

Behind the scenes of practice, band boosters and directors constantly work to bring in money. In addition, to help pay for marching season, the 185 band students typically shell out $350 for band fees.

“It’s always stressful, what do you do with a kid that can’t afford it? You don’t want to kick them out,” Cox said. “I want to give my kids the experience that I had. I had a blast.”

However, Goshen Marching Band, when compared to school corporations across the state, doesn’t have the most expensive fees.

But when it comes to winning, he added, “It’s a money game.”

“If you want to be successful, it is going to cost,” he said.

Marching band isn’t cheap, Cox explained. His budget at Goshen is decent, but small compared to other Class A schools, including Carmel and Avon.

Marching band is divided into four classes, based on school size. Goshen is in the largest class.

Cox pays for the marching band program primarily through the support of band boosters. While he and several other directors are paid by the school system, some of the most expensive costs — including extra staff, drill writers, music arrangers and guard costumes — come out of the booster’s budget.

“In everyday life, if you have money you can tend to go and buy the better things,” she said. The same applies to marching bands, she noted.

Funding comes in the form of grants, donations, fundraisers and student band fees.

The money the boosters raise covers marching band, percussion, guard or any band program, Nissley said. The amount of support a school receives can differ significantly across the state.

Due to community support, band fees and school and program enrollment, schools such as Avon can have more than twice as much money to spend as Goshen.

• On the other hand, Avon’s total expenses were $544,410, according to the boosters’ 2015 financial forms. More money gives program directors the ability to pay for more experienced staff, drill writers or music arrangers, Cox said.

Equipment and manpower can add up, said Glenn Northern, director of Penn High School Bands. He hires up to 18 people in the summer to help his band.

To a degree, Northern said his band must match other bands financially to compete successfully. As the bar gets raised competitively, it gets raised financially, he explained.

‘IT IS EXPENSIVE TO BE COMPETITIVE’

Even entering into competitions can be expensive, said Tim Cox, director of Decatur Central Band and the twin brother of Goshen’s Tom Cox.

For Bands of America competitions, it can cost the band roughly $500 to enter.

He said even with his students paying $500 for band fees and earning by hosting competitions, it's a constant struggle to raise money.

“It is expensive to be competitive,” added Tim Cox. “There’s no way around it in Indiana.”

In the past 20 years, Goshen has never won first place in either Class A or B in the Indiana State School Music Association marching band state finals, according to ISSMA records. Avon, however, has won 11 times in Class A and twice in Class B in the same time span.

“All we can control is what we are doing, how well we are doing and how consistent we are,” Hassell said. “If we are doing the best we can with what we have … we are happy.”

Not all directors agree that money and success correlate.

“No, I’d say it’s more about talent of the people putting the show together and rehearsing the show,” said Scott Spradling, director of Concord Bands. “There is not a correlation, but I would also say that you know there is a certain minimum level you have to be willing to pay for it to be good.”

FOR THE LOVE OF BAND

Hernández, who recently began her fourth and final year in Goshen’s color guard, said she has worked hard to pay the band fee each year.

“Compared to other bands, our band fees are not (too much),” Hernández said. “I am really grateful, but sometimes it does feel like it’s a lot.”

To help out her family, she pays the fee through a fundraising opportunity at the Elkhart County 4-H Fair. Band students scan fair entry tickets and receive money in return.

Working a full week can pay off almost all of the fees for one year, she said.

Hernández said she doesn’t mind the work at the fairgrounds if it means supporting the band she loves.

“In guard, we learn a lot of life lessons — it feels like a second family,” Hernández said. “You connect with everybody. If you are having a hard time at home you come here and there is always somebody to talk to.”