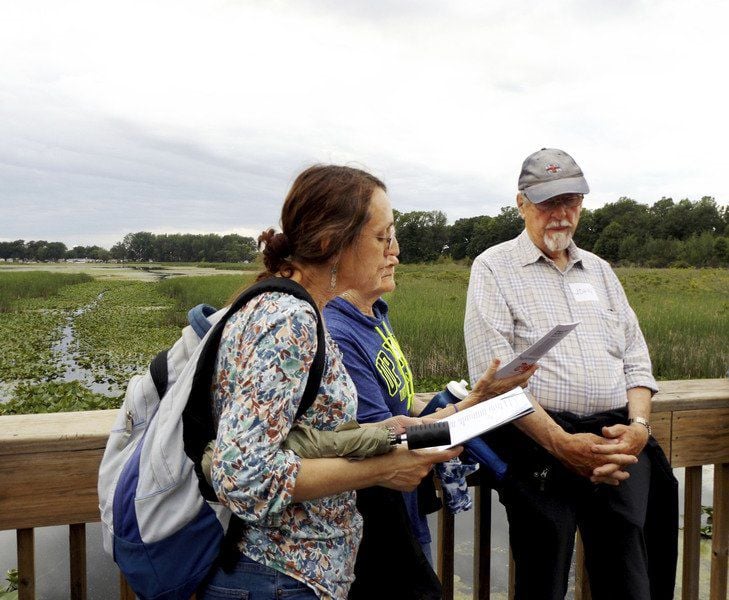 DENISE FEDOROW | THE GOSHEN NEWSIndiana’s Poet Laureate Shari Wagner reads her poem, “At Dawn in the Subdivision” with the group of participants in the Bicentennial Sunset Stroll, part of the Next IN Campfire program sponsored by Indiana Humanities. Wagner chose this poem to read at the wetlands because it talks about blue herons. Shown with Wagner is John Bender from Elkhart. 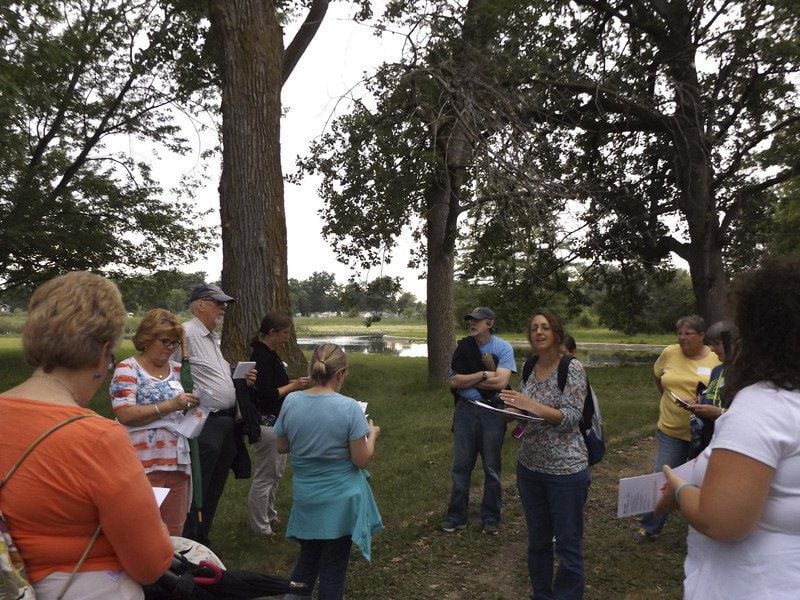 DENISE FEDOROW | THE GOSHEN NEWSIndiana’s Poet Laureate Shari Wagner (center, facing camera) reads a poem by an Indiana poet along with the participants gathered around her during the Bicentennial Sunset Stroll around Lake Syracuse Thursday evening. The group were stopped on property just purchased by the Wawasee Area Conservancy Foundation, named the “Land between the Lakes” as Lake Syracuse is on one side, Lake Wawasee on the other.

DENISE FEDOROW | THE GOSHEN NEWSIndiana’s Poet Laureate Shari Wagner reads her poem, “At Dawn in the Subdivision” with the group of participants in the Bicentennial Sunset Stroll, part of the Next IN Campfire program sponsored by Indiana Humanities. Wagner chose this poem to read at the wetlands because it talks about blue herons. Shown with Wagner is John Bender from Elkhart.

DENISE FEDOROW | THE GOSHEN NEWSIndiana’s Poet Laureate Shari Wagner (center, facing camera) reads a poem by an Indiana poet along with the participants gathered around her during the Bicentennial Sunset Stroll around Lake Syracuse Thursday evening. The group were stopped on property just purchased by the Wawasee Area Conservancy Foundation, named the “Land between the Lakes” as Lake Syracuse is on one side, Lake Wawasee on the other.

SYRACUSE — About 25 people set off Thursday evening to walk and read together, along with Indiana’s Poet Laureate Shari Wagner, as part of the Next IN Campfires Bicentennial program sponsored by Indiana Humanities. The statewide series is a way to connect nature, literature and the bicentennial.

The rain that began as the group gathered at Syracuse’s Lakeside Park didn’t seem to dampen the spirits of the group, which came prepared, but skies soon cleared.

They were welcomed by Leah Nahmias, director of programming for Indiana Humanities, who explained the series, was meant to help Hoosiers appreciate the different natural landscapes the state offers and encourage environmental conversations with the scholars with whom they’ve partnered.

Shari Wagner, Indiana’s poet laureate for 2016-2017, was the scholar and facilitator for Thursday’s event. As she greeted participants she told them she chose “incredible poems” by Indiana poets that had environmental and nature themes for their stops during the walk.

Indiana Humanities also partnered with Syracuse-Wawasee Trails and Executive Director Megan McClellan explained they’d be walking the newest part of the trails so far — the nearly five-mile loop around the lake.

Nahmias explained there’d be no campfire, s’mores or beer that night but they’d serve a meal at the end of the walk and root beer floats to make up for it. Everyone was asked to introduce themselves and share their favorite Indiana wildlife creature and answers ranged from garter snakes to blue herons to deer — even opossums and skunks got a mention.

Participants were encouraged to watch for wildlife along the walk and were rewarded with several deer and Canada geese sightings, muskrat and rabbits.

Much of the trail was through neighborhoods where residents greeted the walkers — at one home a 4- to5-year-old boy slapped everyone’s hands as they walked by — and drivers slowed down to ask where the group was going. Participants expressed appreciation for the different homes’ architectural designs and landscaping as they passed by.

Wagner chose appropriate poems specific to the Syracuse-Wawasee Trails, including “Roadside Marker” by Jared Carter, read next to an American Indian historical marker on the trail, and “Bringing Things Back From the Woods” by David Shumate as they passed a wooded area, “Olin Lake” by Shari Wagner read near a channel and “At Dawn in the Subdivision,” also by Wagner read at the wetlands.

Wagner said she was inspired to write that poem as she watched a blue heron from her window and was concerned about it since they’d recently found 12 dead ducks in the subdivision.

“Glacier” by Jared Carter was read at Hoy’s Beach because the lakes were formed by glaciers, and a few other poems were shared as well.

McClellan pointed out features of the trail, including the boardwalk near the Wawasee Area Conservation Foundation’s property and the plans to build a similar one at Conklin Bay. She told participants that whenever a wetlands property comes up for sale, WACF buys it and they stopped at a recently purchased property where several groups of Canada geese were resting. McClellan said they were calling that property “Land between the Lakes” because Lake Syracuse was on one side and Lake Wawasee on the other.

Rusty Dailey and Jo Schwartz took the trek together. Schwartz joined the program because she was excited about the trails and that more are coming and said she’d never walked the loop around the lake. Dailey said she enjoyed the area’s activities. Her home is on the channel, next to the WACF property along Ind. 13.

John Bender of Elkhart and his wife are part of a walking club so the five-mile walk is something they try to do daily. He said when they “discovered” Syracuse a while back they were pleased with the vibrant town and are looking forward to walking the trails more often.

At the end of the nature walk, the participants ate their meal while Wagner shared excerpts from “Wildness” by Scott Russell Sanders. There was discussion about where the individuals go to find nature and how to encourage the younger generation to unplug and appreciate nature more.

Wagner also facilitated the talk on Tuesday at McVey Memorial Forest and the Syracuse event was the last of the events she was assigned. She finished with a quote by Chief Tecumseh, “When you rise in the morning, give thanks for the light, for your life, for your strength. Give thanks for your food and the joy of living. If you see no reason to give thanks, the fault lies in yourself.”

Leah told participants that this event was the fourth of 18 planned through November, which will include hikes, walking, canoeing and even an overnight camping trip. Most of the events cost $10. She also said that if people want to form their own group they have do-it yourself kits called “Trek and Talk Toolkits” that even include snacks.

Afterwards Leah explained the idea for the program came to her as she was researching Indiana Pulitzer Prize winners as this is also the 100th anniversary of the Pulitzer Prize. While thinking of Edwin Way Teale, she said she thought, “What if I took people out on the Dunes to read his work and it grew from there.”

Nahmias also stated that the program honors the fact that the Indiana State Parks system was founded for the centennial in 1916 so the Bicentennial nature trust and Next IN wants to protect that legacy and have Hoosiers thinking about what they want to do for the next 100 years.

“We have great literature written by Indiana authors about nature and the environment and we usually read them indoors, not where they were inspired,” she said.

Wagner said participating in this program “perfectly meshed with two of my goals as poet laureate — to celebrate poetry’s connection to nature and promoting Indiana poets. Much of my own poetry is inspired by nature, from pilgrimages to parks and nature reserves.”

“I think the program is so important to protect our natural areas in Indiana and it’s so wonderful that they’ve brought literature into it,” she said.

Upcoming nature strolls nearby from Next IN Campfire include Merry Lea Environmental Center, Albion, on July 23 at 10 a.m. and Limberlost, Geneva, Oct. 8 from 4 to 7 p.m.

For a full schedule of events statewide and to register, visit www.indianahumanities.org/campfire.

Poet Laureate Shari Wagner will be holding a poetry workshop at Middlebury Public Library on Sept. 27 and at Goshen College on Sept. 28. Her website is www.throughthesycamores.com or www.shariwagnerpoet.com