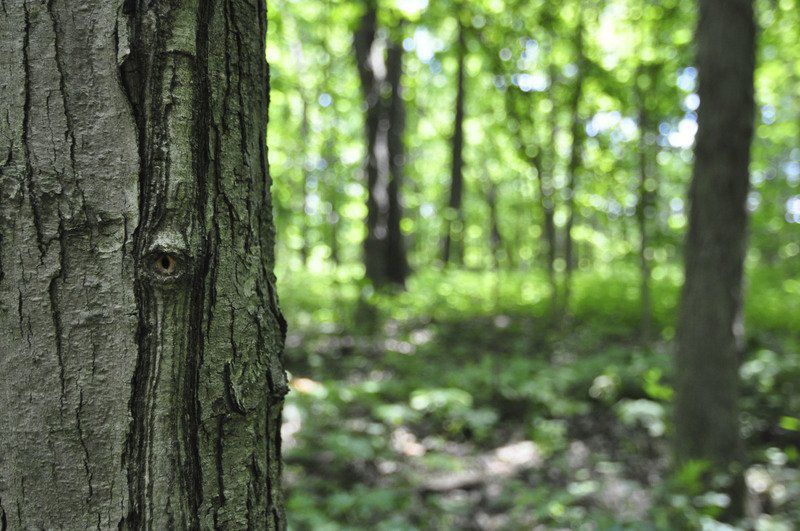 PHOTO PROVIDEDThe Caprarotta family chose to protect their land with ACRES Land Trust to “create a family legacy and, at the same time, reward the land for its many years of cultivation.” 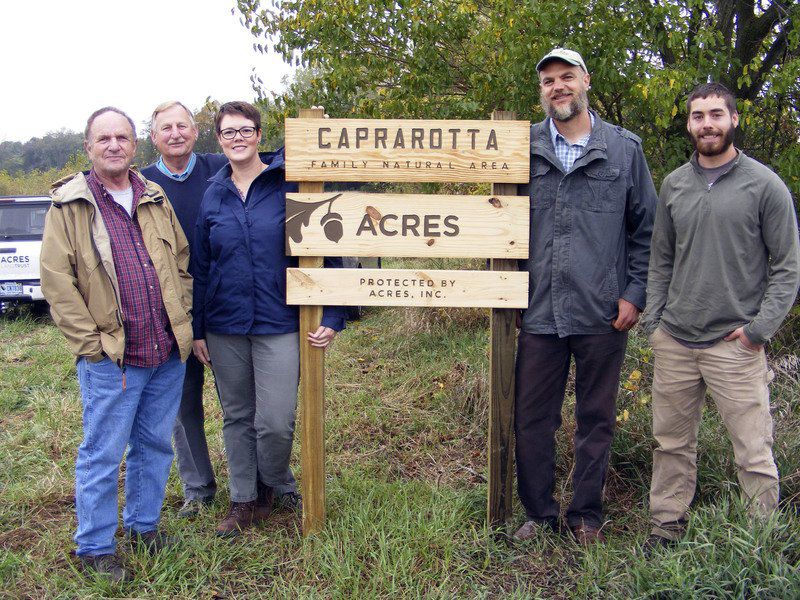 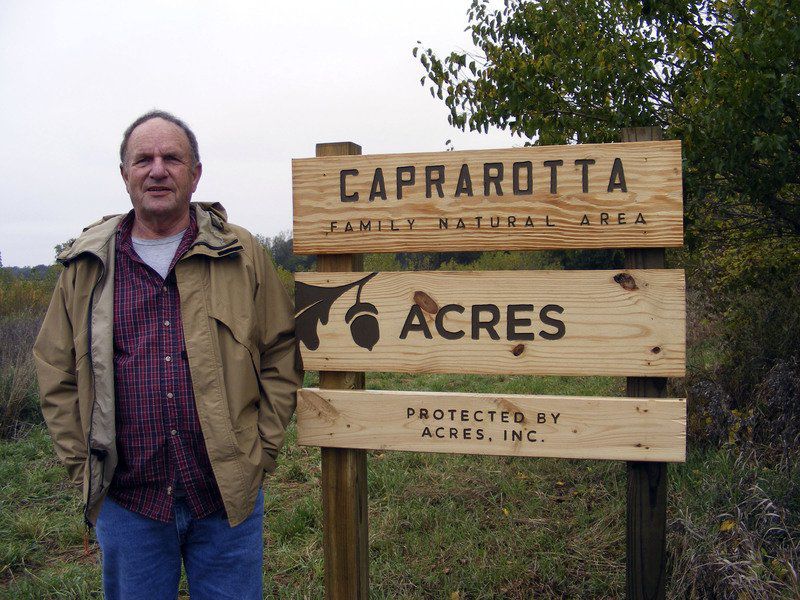 PHOTO PROVIDEDGary Caprarotta recently celebrated the permanent protection of the Caprarotta Family Natural Area, south of New Paris, with a sign posting with ACRES Land Trust, the local conservation nonprofit that will protect it, forever, with its members.

PHOTO PROVIDEDThe Caprarotta family chose to protect their land with ACRES Land Trust to “create a family legacy and, at the same time, reward the land for its many years of cultivation.”

PHOTO PROVIDEDGary Caprarotta recently celebrated the permanent protection of the Caprarotta Family Natural Area, south of New Paris, with a sign posting with ACRES Land Trust, the local conservation nonprofit that will protect it, forever, with its members.

NEW PARIS — For Gary Caprarotta and his mother, Velma, the family’s historic farm located just southeast of New Paris represents a host of fond memories that they’d love to see preserved in perpetuity. And thanks to the property’s recent donation to a state land trust, they just might get their wish.

Now known as the Caprarotta Family Natural Area, the 29-acre property, located on the southeast corner of the junction of C.R. 25 and C.R. 48, was officially donated by Velma to the Huntertown-based ACRES Land Trust in early fall of this year, effectively becoming the trust’s first family-donated preserve in Elkhart County.

Founded in 1960, ACRES Land Trust is the oldest and largest land trust in Indiana, protecting just under 7,000 acres of local natural area and working land in northeast Indiana, northwest Ohio and southern Michigan.

“What we do here at ACRES is look for natural properties or properties that the community wants to protect. Then once we acquire them, we guarantee never to sell them. So it kind of locks in the stability of the property,” Jason Kissel, executive director of ACRES, said of the nonprofit. “We won’t develop it. We won’t sell it. We won’t put housing additions on it. It’s just allowing the land to function the way it wants to.”

According to Kissel, Velma’s recently donated property was purchased in 1925 by the family of her late husband, Francis, who emigrated from Italy to the Chicago area.

Born in 1924, Velma actually grew up in a farmhouse located just across the road from the now-preserved property, Kissel explained. She and Francis would marry following World War II, and the two would raise five sons together while living in her childhood home. In 1959, to keep the family name on the Caprarotta property, they would make the decision to purchase the land from her in-laws.

“I guess you could say I kind of planted the seed with my mother, and she grabbed onto it and liked it very much,” Gary, now 69 and living in Ohio, said of the idea to donate the land for preservation. “I talked to my brothers about it, and they liked the farm, but they just weren’t as attached to it as my mother was. She lived across the road from it as a young girl, and part of the property had tall trees on it. A lot of songbirds would fly into those trees in the springtime, and she used to listen to them outside of her window. So she has a real attachment to the land, as I do.”

While Velma and her family have since moved from the area, Kissel said the desire to permanently protect the land she loved led her and Gary to seek a conservation organization that would not only hold the deed to the land, but preserve it in perpetuity. That’s where ACRES came in.

“This is actually just a portion of what they used to own,” Kissel said of the property, which when originally purchased had set at right around 80 acres. “She wanted a piece of that to always remain with the family name on it, and again, for it to be something that the family can always come back to. Farms tend to get split up over the years, but to be able to come back to one spot and know it’s always going to be there is really kind of what they were after.”

The Caprarotta Family Natural Area features a developing wetland area and was donated to ACRES already enrolled in the Indiana Department of Natural Resources’ Classified Forest and Wildlands program as well as a federal Natural Resources Conservation Service program, Gary explained, noting that the work to begin transitioning the property from farmland to wetland began back in 2011.

“As part of the wetlands program, we planted 12,000 trees in that property, as well as broke all the field tile to let the water accumulate like a wetland would,” Gary said. “It’s been very interesting to see the transition just in the six years since it used to be an agricultural field. Every time you go up there there are changes occurring.”

While ACRES does currently have properties that remain open to the public for visitation and recreation, Gary noted that the Caprarotta preserve — at least initially — will remain closed to all but ACRES staff and the family.

“Generally the agreement we have with ACRES is that the family can visit it anytime they want to up until 2060 I believe. So they’re very generous about allowing the family access,” Gary said of the property. “And then even after that date, if any family wanted to see it, I’m sure all they’d have to do is contact ACRES and set something up. As for the general public, at least while this is transitioning, we’ve left it closed to the public. Then if at a later date they think it has merit to open it up for visitation, then that’s their prerogative.”

According to Kissel, a protected woodland, wetland, working land or other naturally significant area is one of the most valuable legacies a family or individual land owner can leave for future generations.

“Families have several options for protecting their land in partnership with ACRES: as an outright gift, bequest, reserved life estate, market-value purchase, or, most frequently, as a discounted purchase,” Kissel said of how the trust acquires its properties. “The value of the donation may qualify as a charitable contribution, though individual tax and financial circumstances vary. Furthermore, donors have the opportunity — including naming rights — to preserve and share their stories from the land. They may also retain rights allowing them to continue to live on the land or use it for personal recreation.”

For more information about ACRES Land Trust and its work, call 260-637-2273 or visit the company website at acreslandtrust.org.